Slow down? Perhaps. Give up? Nope! The thrill of whooshing down a snow covered mountain never goes away for women determined to stick with the sport. 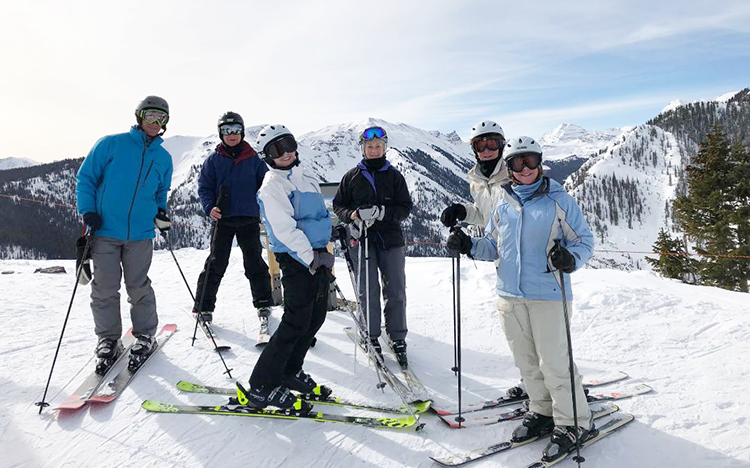 Every time I take a ski trip, after the last run down a mountain on my final day, I ask myself: “Is this the end of my skiing career?”

That’s because as friends and I bump beyond the three-quarter century mark, more and more quit downhill skiing. They can’t bear taking it easy, can’t handle the altitude, can’t deal with skiing’s aches and pains. Their bodies say, “enough.”

They are afraid to fall on the slopes. So am I. But I’m still at it; I love this sport.

There’s no question skiing is risky. Bad things can happen when you catch an edge and tumble. Beyond physical damage, it’s embarrassing to discover “I’ve fallen and I can’t get up.” Even those of us who think we have good upper body strength to push ourselves upright sometimes must ask for help.

The best technique is to avoid falling in the first place. Failing that, as I have, the best antidote to the older-skier blues might be to sign up for a Road Scholar ski trip, preferably in the Rockies, where the snow is inevitably softer than in the East.

A not-for profit educational tour operator, Road Scholar—formerly Elderhostel—is for people 50-plus. In February, I joined 13 women and four men on a six-day visit to Aspen Snowmass in Colorado. Our ages ranged from mid-60s to high 70s. Our three guides were over 55 as well.

Snowmass, my favorite mountain in North America, is about 9 miles by car or free bus from the town of Aspen, and perfect for aging snow addicts. It is so massive that almost half its 3,300 acres consist of intermediate blue runs. (For non-skiers: green runs are easiest, blue intermediate, and black advanced.)

“I ski blue and black, and I come home black and blue,” joked Cynthia, a 75-plus woman from the New York suburbs as we all gathered for the opening dinner. 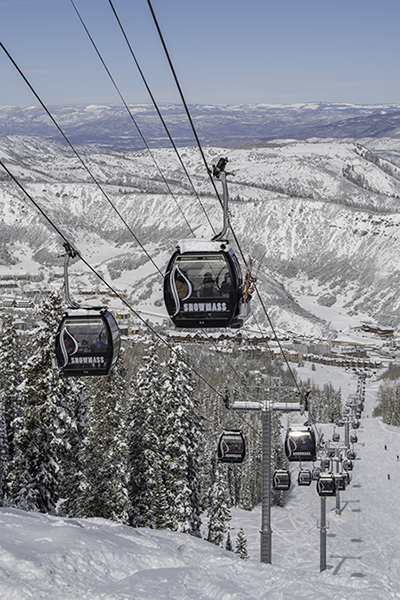 Most of us were veterans of RS Western ski trips in previous years. Single, divorced, widowed and married, including one couple, wives with husbands who stayed home and vice-versa, from every section of the U.S., we were similar only in that we were all intermediate or higher level skiers.

This is my yes!-still-skiing cohort—a small slice of the ski pie that is getting smaller. According to industry reports, the percentage of boomer-age skiers declines seriously after age 50; after 70 it drops precipitously.

When lead guide Peter McCarville, a lanky, genial 57-year old geologist, welcomed returnees at our opening dinner, he said with a smile that he wouldn’t call us “old-timers. You’re ‘repeaters.’”

We were lodged at a comfortable older hotel located a short walk directly onto the slopes. The next morning, we split into three groups. Peter assured the us that the guides’ job was to “put you in the right group at the right tempo. Don’t be comparing yourself with other people. Skiing is a selfish sport; it’s you and your own little heaven.”

By 9:30 the first day, we reached what I think of as my personal ski heaven: the Big Burn. In the late 19th century, the once-forested area suffered a huge fire, leaving “a large burned area with many blackened stumps,” according to a local paper. Today, it is a paradise of of long runs whose snow is groomed by machines into packed, easy-turning “corduroy.” The remaining widely spaced trees are studded throughout. The Burn all by itself is a mile wide and a mile long.

Jane, my group’s guide the first day, turned out to be the proud owner of a 10-month-old replacement hip. She wasn’t the only one with an artificial device beneath her ski pants. Two advanced-level women demonstrated that double knee replacements could prolong one’s ski life. Terri, who was in her 60s, said she had the surgery four years ago because “I did not want to lead a sedentary life.” A runner and competitive horseback rider, her new knees “have given me my life back,” she said fervently.

Road Scholar is not the only outfitter catering to senior skiers. (See below.) Marlene, the other woman with new knees, noted that friends back home in Illinois have created their own personal “Chicks on Sticks,” who meet up on their own at different resorts. The oldest member is 84 years old.

But why the preponderance of women over men?

As we enjoyed the vast terrain for the next few days, several women suggested that women stayed in better shape than older men, with hiking, walking, swimming and cycling. (All of us seemed to be involved in active sports.) Other ideas: women enjoy skiing in groups rather than alone. Also, women who invite a friend along create a snowball effect. And women do tend to live longer than men. Who knows if any of these ideas is even scientific?

As Cynthia said, “I love the fact that I can still get out on the slopes, even if I’m slower every year. At home I’m left with a few gym buddies and a bunch of people who get their ‘exercise’ from bridge, canasta, mahjong and book groups.”

No one seemed to care about the skewed ratio of women to men. “This isn’t a pickup situation,” laughed Cynthia.

It’s worth noting that some of us don’t own skis anymore, choosing to rent them instead. I ditched mine years ago, disliking the shlep and the extra airline charges. I get my boards from Ski Butlers, a terrific service that meets you at your lodge or home and fits you with skis and poles. Rental boots are also available, although most ski renters bring their own.

According to Riley Tippet, the owner of Aspen, Telluride and Sun Valley Ski Butlers, in these locations and across Ski Butlers outlets in Europe, Canada and the U.S., not only are “roughly 50 percent of clients female; 60 percent of those are over 50.”

By the end of our five days, were a convivial group. The snow was fantastic. Each evening a bunch would convene in the hotel’s hot tub to review the highs and lows, the cruises and the bruises. On the last day, one woman did take a bad fall and had to be brought down to the base by the Ski Patrol sled; she was able to fly home the next day.

As usual, my knees are sore. Nevertheless, I returned from Colorado with my head still full of the joy of Snowmass.

Road Scholar has downhill ski packages annually to resorts in Colorado, Utah and Maine. Cost for 5 or 6 days start at under $2,000, without airfare. Includes lift tickets, double-occupancy lodging, breakfasts, lunches and most dinners.

Organizations like the Over the Hill Gang at Copper Mountain in Colorado and Top of the Hill Gang in New England exist at numerous resorts. They give seniors special rates and are geared typically to people who live within driving distance and can ski often. At Copper the program operates Tuesday, Wednesday, Saturday and Sunday.

Aspen itself has a lessons-and-ski package called Women’s Edge, but it is not limited to seniors. Many resorts, including from Stratton, VT to Whistler, BC have similar women-only clinics, weekends and camps.

A Peek at 10 New Books For Spring Reading