A Peek at 10 Books for Spring Reading

Books for this spring include titles about the women’s movement, aging and New York City. Among the authors: Barbara Ehrenreich, Anna Quindlen and Meg Wolitzer. 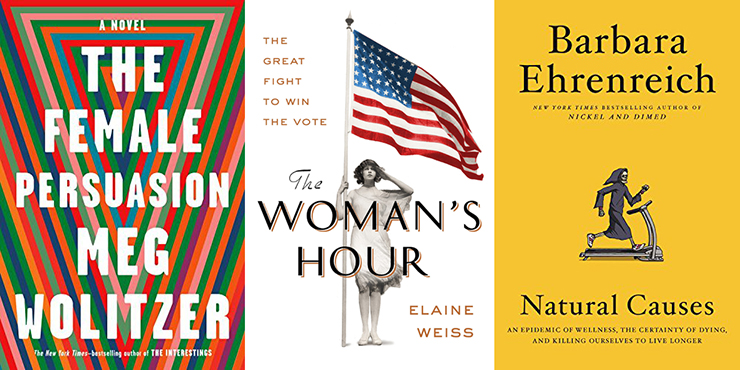 Wolitzer’s previous novel, The Interestings, was a multi-character read about a group of kids who met in camp and grew up interlocked. Her new book is likely to be a best-seller, partly because the publicity engine is already gearing up and partly because the central figure is a Gloria Steinem-like character named Faith Frank, who mentors Greer, a smart but initially underachieving younger woman.

Faith meets and inspires Greer at a college reading. After Greer graduates, Faith hires her to work for Faith’s nonprofit speakers forum, called Loci. Other central figures include Greer’s boyfriend, who appears to have a glittering future, her gay best friend, and Faith’s investing angel, a billionaire perhaps resembling Mortimer Zuckerman. The book touches upon caregiving, women’s ambitions, the responsibilities of second wave feminism and other hot topics. I found the plot to be engaging and the characters suitably complicated.

2. Natural Causes: An Epidemic of Wellness, the Certainty of Dying and Killing Ourselves to Live Longer by Barbara Ehrenreich ($27, Twelve Publisher, 256 pages)

Ehrenreich, who gave us Nickel and Dimed, skewers the wellness industry as it urges us senior women to eat this and not that, to exercise without mercy and to undergo medical procedures we might not need. I loved reading the first segment, which includes a jeremiad against diets, annual doctor exams, colonoscopies and their ilk. As the author has a PhD in cellular biology, she lost me a bit talking about the science of aging. But she won me back as she crusaded about our obsession with longevity. Ehrenreich is never less than controversial and always has a fascinating point of view.

Did you join the Women’s March this year or last? Well, here is a fast-paced account of an earlier suffrage “march” focusing on the weeks in 1920 when Carrie Chapman Catt and two other leaders charged into Nashville, determined to win Tennessee’s key ratification of the 19th amendment.

But the “Suffs” had an opposition group to contend with led by Charlotte Rowe, field secretary of the National Association Opposed to Women’s Suffrage. (Ida Tarbell, the famous female muckraker, was also hostile to the suffragist cause.) The fight led to confrontations in courthouses, the governor’s mansion and the statehouse. “There is a heartening, even thrilling lesson to be found here…ordinary women banding together to become activists….” writes Weiss. It’s a victorious, timely tale, vividly told. 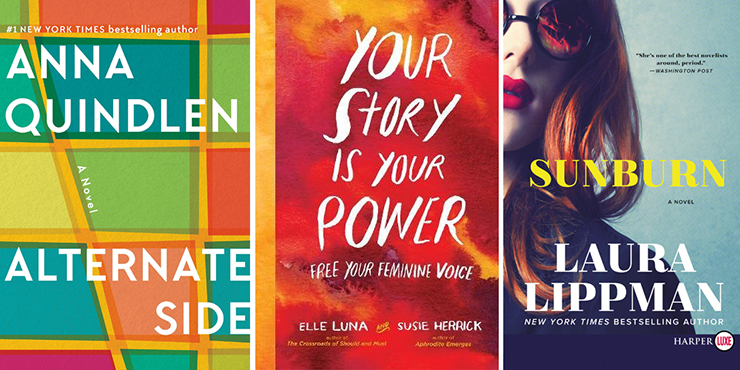 Count me a Quindlen fan: we were colleagues at the New York Times and I watched her blossom from reporter to columnist to novelist. Her novels are always accessible, filled with characters and situations you recognize. Her forthcoming book is no exception; it’s the quintessential Upper West Side book, profiling a couple, Nora and Charlie, who live near other couples, each in their own brownstones, on a dead-end street. Is their marriage also at a dead end?

The book tackles first-world problems—not just parking spaces, but picking up doggie poop, sharing a Hispanic handyman, what not to tell your female lunch gang, mortgages, and how to change jobs when you are over 40. The novel has realistic dialogue and a female-empowerment theme. Chances are you’ll identify with the characters, or at least know others who are in similar circumstances.

5. Your Story Is Your Power: Free Your Feminine Voice, written by psychotherapist Susie Herrick and designed and illustrated by Elle Luna ($17.95, Workman, 180 pages)

An inspirational how-to book, told in graphics and text, showing women readers the steps to female power, truth and action. Its hand-drawn graphics and step-by-step questions (Are you an Investigator? Individualist? Peacemaker? Achiever? Caretaker?) may be off-putting to readers not interested in self-help guides. But if this approach appeals to you, so will the book.

Many of us mourn the death of Sue Grafton and plucky Kinsey Milhone, the P.I. of her alphabetical series. But happily there are other terrific female suspense and crime novelists on the scene. Lippman is among the very best. Her latest mystery, set near the Delaware shore, begins with a woman who calls herself Polly, who sneaks away, abandoning her husband and their three-year-old child. Polly lands in a scruffy town, where she becomes a bartender. Soon she takes up with a short-order cook. Intrigued? So was I. Polly and her lover, not surprisingly, each have a backstory. The ending is a jolt; I didn’t see it coming. 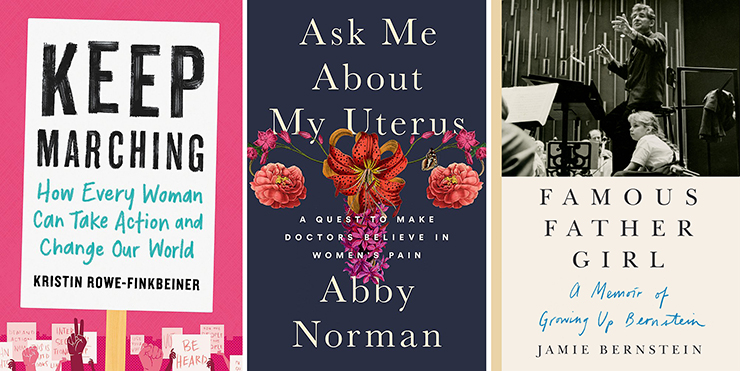 Finally—some titles that look intriguing; I have not read them yet:

7. Keep Marching: How Every Woman Can Take Action and Change Our World by Kristin Rowe-Finkbeiner ($16.99, Hachette, 336 pages)

Rowe-Finkbeiner is the 48-year-old co-founder of Moms Rising and a speaker at the Women’s March. The book shows women how to organize groups to stand behind specific issues like sexual assault, family leave, affordable health care and others

A memoir and health-issues book about the author’s experience with endometriosis. It also touches on other conditions that go untreated or are dismissed in women’s lives. A full-throated demand for attention. 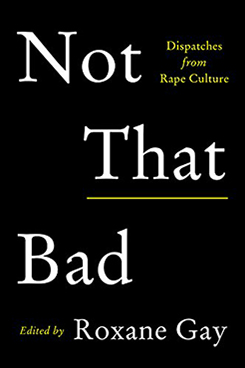 Let’s hand it to the oldest daughter of Leonard Bernstein to come up with the catchiest title on this list. If you loved Leonard Bernstein as a composer, conductor, educator and/or all-around music man—and I certainly did—you can look forward to what promises to be an intimate portrait about Jamie’s dad. Jamie herself is no slouch; she is an accomplished narrator, documentarian and keeper of the flame, especially in this centennial Lenny year.

10. Not That Bad: Dispatches from the Rape Culture edited by Roxane Gay ($11, Harper Perennial, 368 pages)

A timely book with an introduction by Roxane Gay, a fine writer, who shares her own rape story. She also presents original and previously published real life stories about sexual assault, harassment and how women have been “routinely second-guessed, blown off, discredited, denigrated, besmirched, belittled, patronized, mocked, shamed, gas lit, insulted and bullied” for speaking out.