Even if you’re not as agile as a 30-year-old, you can still pedal through rolling hills and vineyards on an electric-assist bike. 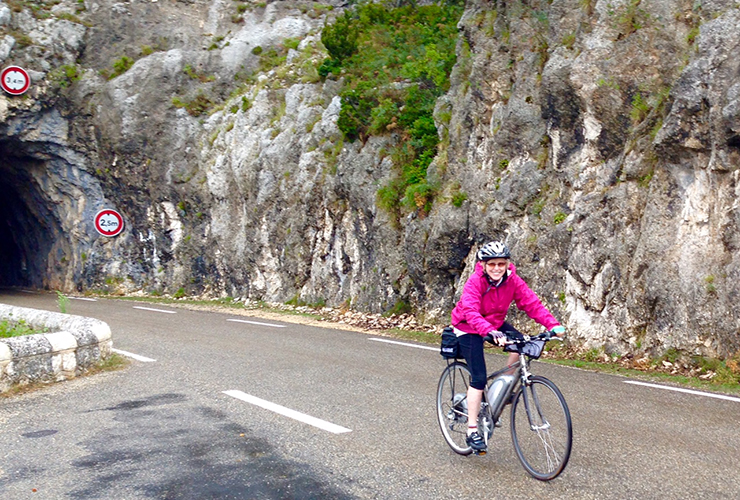 Perhaps for a long time you’ve wanted to travel through Provence and have heard that the best way to tour is from the seat of a bicycle. But you’re afraid that now you’re too out of shape and no longer have the stamina for riding daily through rolling hills and vineyards.

Well, no more excuses! Now anyone—even if you’re feeling old and slow—can take a bicycle-tour vacation and enjoy the routes with a little help from an electric-assist bike. This is not a scooter or totally motorized vehicle. It’s a regular bike with a battery that gives you a boost when you need it most—climbing hills or pedaling at the end of a tiring day.

I toured Provence in September with Backroads, a popular tour company that offers biking trips in dozens of countries worldwide, and six of the 15 people in my group opted for e-bikes. I was the oldest (Medicare-plus) but pretty fit. The other e-bikers were all women 50+—a mix of novices and more experienced riders. (I got the sense that men would rather not go at all than ride an e-bike.) 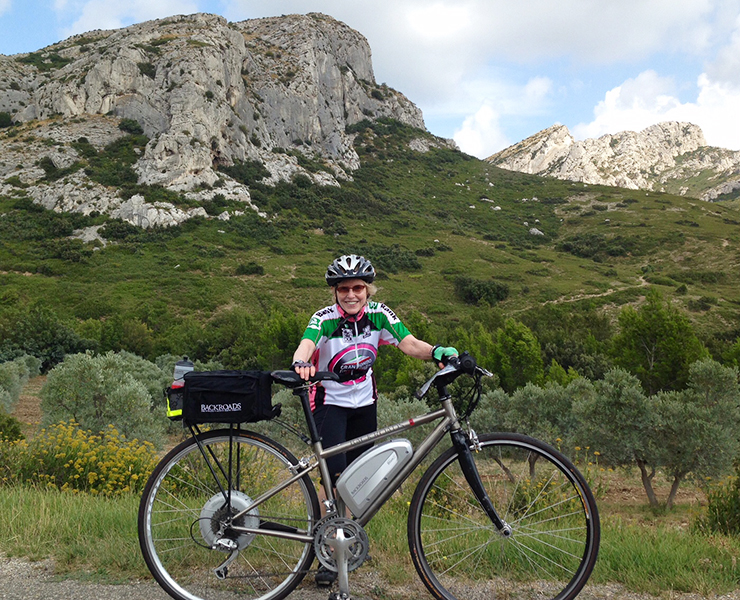 While e-bikes have been used for years in New York City, some e-bikes used by food service messengers don’t require any pedaling at all. The ones used by bike-tour companies in France, Italy and other countries do require pedaling—the motor is activated by you and pushes you a bit—or more than a bit.

I had never been on an e-bicycle before signing up for my guided tour of Provence. Although I am a longtime bicycle advocate and cyclist (I ride all over Manhattan), in recent years I have found each multi-day bike tour harder and harder to train for, and it added new aches to new parts of my aging body. Wasn’t this a lifetime sport? Might I have to give up before long?

Backroads is one of my favorite bike touring outfitters and this tour included five nights in delightful, well-appointed hotels and six days of riding. We also spent four nights in two inns and one in a third inn so we did not have to move every single day. 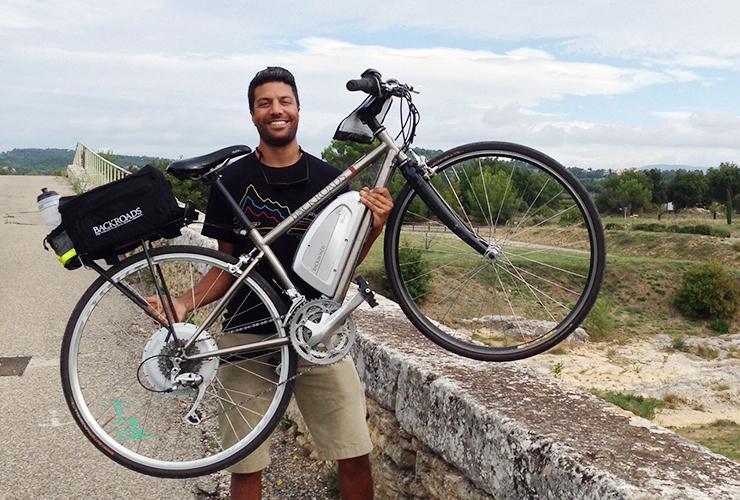 Our riding began east of Avignon in the Apilles region of Provence, a gorgeous swath of southern France famous for wine, lavender, Roman ruins, scenic hillsides and food. During the week we traveled to many of Provence’s high spots: Roman ruins, the “villages perches”—hill towns such as Baux, Rousillon and Gordes, among others; the Lacoste Chateau, once the residence of the Marquis de Sade and later owned by Pierre Cardin.

We also experienced a vineyard tasting; an olive oil tasting; the dramatic Gorges de la Nesque and a Van Gogh lecture. Two charming and efficient bilingual guides plus an assistant led the way and ferried our baggage (and us, when needed) using two vans.

Even so: let’s get one thing straight; I still pedaled my fanny off. But it was less taxing than if I had been on a regular bike. Motorized bikes have regular gears—three in the front, seven in the back—just like a regular bike. There are also four extra electric-assist levels, sort of like four levels on a hair dryer—minimal, intermediate, higher, highest. The rider taps a plus-sign on an elaborate odometer mounted on the handlebar (below), and the boost kicks in. On flat roads or downhills you don’t have to engage any electric boosts. Or you can go negative and  “downshift” to a gear that electronically slows you down without squeezing the handlebars like crazy. 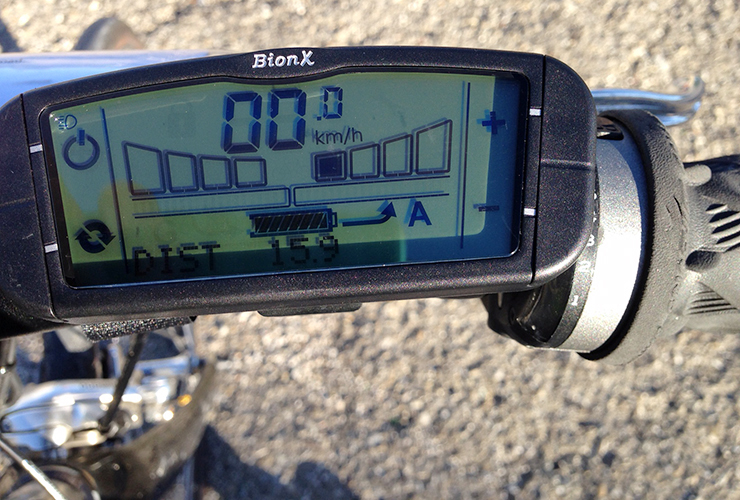 The pros of e-bikes are obvious: “Because of the e-bikes we did twice as many miles much more comfortably than last year on our Loire trip,” commented Fontaine Kohler, a biker from Georgia, who had toured the Loire on a regular bike.

The cons? Our bikes were heavy—the battery was mounted on the down tube and the motor (part of the rear wheel mechanism) added significant weight to even a titanium bicycle. This weight made the e-bike ungainly when I stood over it. And my thighs became black and blue catching my bike as it tipped over when I stopped to peek at directions or take a photo.

Also, the bikes cannot be ridden in the rain because the moisture wrecks the motor. However, how many people who are not from Portland like to ride in the rain? The one day we had heavy morning showers, we e-bikers stopped after four miles, put the bikes in a van and waited out the shower sipping espressos at a charming café.

Clearly, bike tour companies know their clientele. Baby boomers can now choose a trip without fear of running out of gas or breath; an overweight or untrained older tourist can finally enjoy bicycle cruising. Guided luxury bike tours that offer e-bikes are now an option throughout Europe and the United States. Backroads is one of several companies that offers them; various local French shops also offer daily electric-assist  bicycle rentals for self-guiding.

However, I’m now a convert: I absolutely loved the trip, the scenery, the people and the riding. I felt I had found a way to ride forever. Once you get the bike moving, you pedal at any speed that is comfortable for you. The folks I rode with often stopped for photos and shopping.

On our fifth day, we climbed with little fatigue alongside the Gorges de la Nesque to the hill town of Sault, where we had a lovely lunch. Afterwards we came to a long nine-kilometer downhill road where the bike’s poundage actually helped little me. I found myself sweeping past a beautiful landscape at 45 kph (27 mph), the sun warm on my back, Mt. Ventoux of Tour de France fame in the distance. I am often happy on a bike; I cannot ever remember feeling quite this blissful.

Backroads offers 299 itineraries for people of all ages and abilities in 48 countries and territories worldwide. These include biking trips and walking/hiking trips in Europe, Latin America, Asia, the Pacific and North America year round, depending upon the climate. Three leaders and two vans accommodate each tour, offering food and lifts for guests who want to rest. Bike repair is available en route. Visit the website for more information or call 800-462-2848.