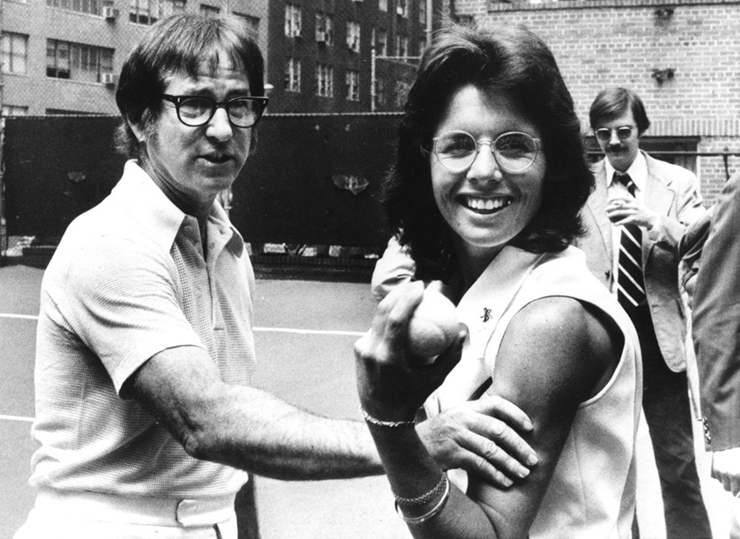 If you had told me back in 1973 that more than four decades later the “Battle of the Sexes,” pitting Billie Jean King against Bobby Riggs in the Houston Astrodome, would be hailed as a sociological milestone and celebrated in a movie starring the latest Oscar winner as the 29-year-old King, I probably would have laughed, incredulous.

After all, the event was more Barnum & Bailey than Wimbledon—an over-the-top tennis extravaganza dreamed up by 55-year-old Riggs, the nearly forgotten former champ who pumped himself up as the world’s leading male chauvinist pig in order to hustle gambling money and attention.

I should know; I was there.

An estimated 50 million people watched on television, still the largest audience ever for a tennis match. For many, it was their first view of pro tennis. Howard Cosell, the leading sportscaster of his day, did the play-by-play. It made an indelible impression on viewers young and old.

A troupe of well-endowed models pulled Riggs in a rickshaw into the arena—Bobby’s Bosom Buddies; Billie Jean entered on a Cleopatra-style feathered litter shouldered by male hunks. There were midgets dressed as dancing bears, a marching band, cheerleaders, celebrities (singer Glen Campbell, heavyweight boxing titleholder George Foreman). King offered Riggs a squealing live piglet! The crowd of 30,492 shouted themselves hoarse at the spectacle. 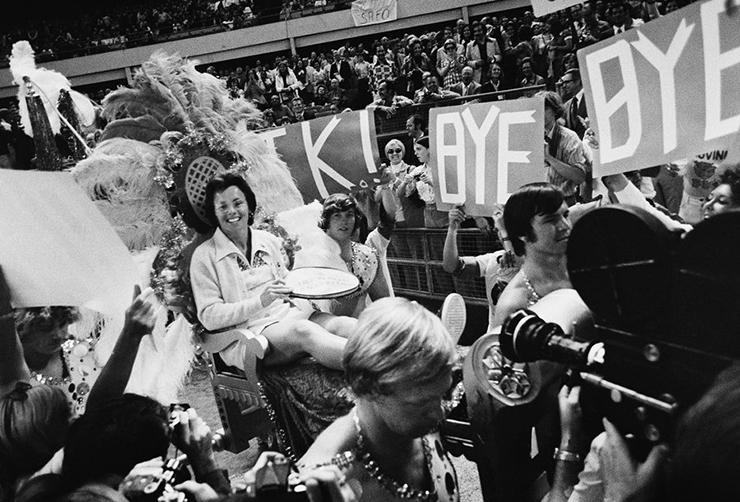 I can still see myself cross-legged on the floor of the Dome close to the baseline, scribbling in my notebook. I was a young news reporter for The New York Times, assigned to write a “color” article that would accompany the primary account of the match by the sports department’s tennis beat writer, Neil Amdur.

The buildup had begun months earlier when the number one female pro, Margaret Court, choked and lost to Riggs on Mother’s Day. King knew then she had to play Riggs to avenge the debacle. For respect, for pride. Sexism, the fuel that fired up the battle into a roaring national debate, was a national pastime then as now.

Even before the “Mother’s Day Massacre” occurred, with no inkling that any of this would happen, I signed a contract to write a book about the women’s pro tennis circuit. I had never covered sports, but I loved tennis and adored the outspoken King.

Therefore that season I spent my vacation days going to tournaments from snobbish Wimbledon to a backwater club on the Jersey Shore, gathering material and getting to know the players. The spitfire Billie Jean, all 5-foot 4½ inches of her, was a joy to interview: she talked as good a game as she played, sometimes to herself, right in the middle of a match.

Back then, players did not have entourages—coaches, masseuses, physiotherapists, agents—barricading them from the press. They were very approachable. 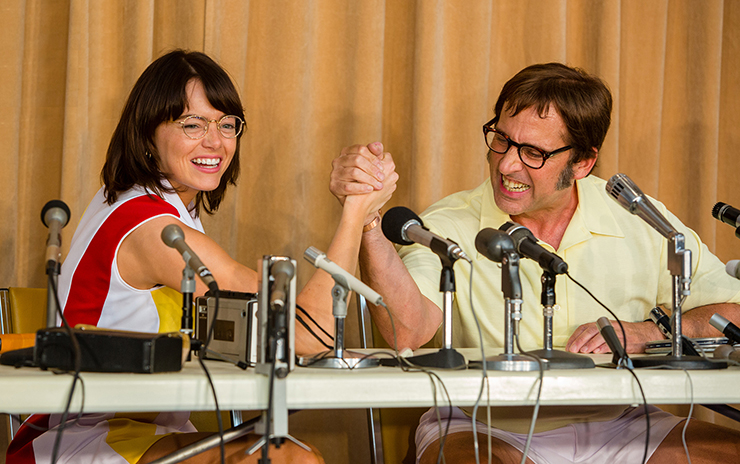 However, Billie Jean, at that point married for eight years to Larry King, a lawyer, did have a “secretary,” Marilyn Barnett, a wispy hairdresser, constantly at her side. As the movie shows, she was also Billie Jean’s secret lover.

The Times knew my book was in the works. Since the newspaper had only just hired its first full time female sports reporter, and since this event demanded co-ed coverage, I was tapped to be Neil Amdur’s backup. How lucky I felt, having a built-in denouement to my book. As the best 3-of-5-sets began, all I needed was for Billie Jean to win.

A few days before Houston, the Times had run side-by-side articles by Neil and me on who would emerge victorious in what the headline called “The Chauvinists Clash.” I picked Billie Jean not in straight sets but in four, suggesting she would drop the first set as she figured Riggs’s game out. Thankfully, I did write that “Choke is not part of her vocabulary.” I’m embarrassed less by my predicted score than by being forced to refer to Billie Jean as “Mrs.” King while Bobby was simply “Riggs.” (“Ms.” was not allowed in the paper of record until 1986.)

The hoopla gave tennis, hardly a major sport like baseball or football, enormous new visibility with paychecks to match. Until then, the female pros earned far less than the men. King in 1973 won the Wimbledon “triple”—singles, doubles and mixed doubles crowns—and collected a total of £3,550. The men’s singles prize alone was £5,000. (By comparison, this year men’s and women’s singles prizes were £2.2 million each.) The prize money gap was far greater in smaller tournaments. So as the movie recounts, a brave group including King rebelled by forming their own separate tour. The sponsor: Virginia Slims. That’s right, a cigarette. Have we come a long way, baby, or what?

In the countdown to Houston, my friend Nora Ephron, then a magazine columnist, got increasingly interested. She saw through it all, via the prism of feminism as well as carnival. “This isn’t even the battle of the sexes,” she wrote. “This is show business. This is a prime-time television variety show starring the two biggest hams in tennis.”

Wagering on the match ballooned: Bobby had side bets with everyone including Dr. Denton Cooley, the eminent Houston heart surgeon. Billie Jean’s father had thousands on the line with fellow firemen back home in California. Nora and I got in the action; we organized a pot of dough among female writers and bet $500 with Riggs himself. At match time, he was the 8 to 5 favorite.

From the first few points, the outcome was never in doubt. “He—slow,” I jotted in my notebook. King was where she always believed she and tennis belonged, in the spotlight, primetime. He didn’t win a set; she persisted. “Mrs. King Defeats Riggs, 6-4, 6-3, 6-3, Amid a Circus Atmosphere,” read the headline on Amdur’s front-page Times article.

I may not have realized it then, but despite the ballyhoo, the event had enduring value. Billie Jean herself understood all along that her victory could be a winning overhead smash for the idea of women’s equality. “I have not had one day in my life where someone doesn’t come up to me and say something about it,” King, said recently.

As a child, she had observed how upper-crust, lily-white tennis was, and vowed she would fight for “equal rights and opportunities for boys and girls, men and women.” The Battle of the Sexes, “gave me the biggest platform I could ever have had.”

These days, another platform honors her: the massive U.S. Open complex in Flushing Meadow. It was dedicated in 2006 as the Billie Jean King National Tennis Center. “This is a show of faith and respect,” she said then. I don’t think I’ll ever comprehend this. It’s like, ‘Oy vey, the responsibility.’ I’m glad I’m still living.”

Now 73, she’s living with two knee replacements. She also lives with her partner of many years Ilana Kloss (a former pro herself). She has become a spokeswoman for LGBT rights. I admit I pulled punches in my book about 1973. Yes, Marilyn Barnett was ever-present that distant summer. Larry King no longer shared his wife’s hotel rooms. But celebrities in every field were closeted. While I hinted that something was going on, I outed no one.

The movie candidly depicts Billie Jean’s blossoming relationship with Marilyn. She and Larry eventually divorced. Interestingly the epilogue does not mention the palimony suit that Barnett brought against the Kings in 1981, well before Billie Jean acknowledged her sexual orientation.

There is no question in my mind that King is the most important female athlete ever. Besides being the holder of 39 Grand Slam titles, she founded a woman’s sports magazine, Women’s Sports Foundation, Women’s Tennis Association, World Team Tennis. And she is one of the greatest champions the feminist movement has ever had.  Being portrayed on the big screen in a spot-on performance by Emma Stone? Icing on the cake.
. . . . . . . . . . . .

Grace Lichtenstein is a former New York Times reporter and bureau chief, the author of six books and a contributor to numerous national magazines. Her book A Long Way, Baby: Behind the Scenes in Women’s Pro Tennis, (1974 hardcover, 1975 paperback) is out of print but available from Amazon and other used book dealers.