According to Maureen Dowd both Hillary and Trump “have a Nixonian streak, a fluid relationship with the truth and both love to play the victim.” 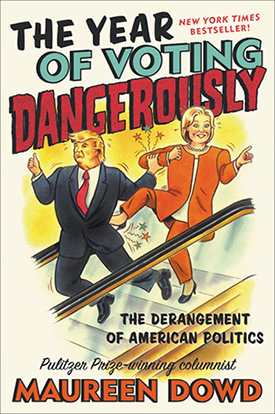 Back in the 1980s, a young New York Times metropolitan news reporter returned to Washington, her hometown, to cover politics. Her writing was tart, her observations keen. Maureen Dowd was a finalist for the Pulitzer Prize in national reporting during the Bush “41” era.

In 1995 she was named an Op-Ed columnist, taking the spot that Anna Quindlen vacated to write fiction. Dowd won the Pulitzer Prize for commentary in 1999 for her “fresh and insightful columns” on the Clinton/Lewinsky affair.

Even as newspapers vanish, her column is widely syndicated and read by millions in the United States and abroad. She demands attention. Dowd is considered a liberal on key issues although she has drawn howls of protest from Hillary enthusiasts for her anti-Clinton stance.

After covering nine Presidential campaigns and sharpening her rapier wit for the wackiest, nastiest, “bumfuzzling” contest of modern times, Dowd this fall published a book mostly of recent columns, plus older ones dating back to 1993 and a dollop of new material.

As always, Dowd’s targets range wide: She aims her stiletto at everyone. She belittles “Barry,” flogs “43” (a/k/a “W”), and goads the “Gotham mogul.” But most of all she hectors Hill and Bill, repetitively and relentlessly.

Has MoDo lost her mojo? Now that she’s officially a senior citizen (her 65th was Jan. 14) might she be ready for a kinder, gentler assignment? Cooking, maybe? Antiques?

I was a reporter at the Times, but I left the paper before she arrived. As a reader, I was a Dowd fan when she reported on the 1988 George H.W. Bush campaign and his White House. Being a columnist, however, is different—and more difficult—than reporting. The task of coming up with a new topic or new viewpoint once or twice a week is daunting. Stand-up comedians are better off; they may repeat their shticks but they perform for a different audience each night. Week after week Dowd and others rehash their material for the same crowd. I adore Gail Collins, but if she tells the story one more time of how Mitt Romney drove for hours with the family dog on the station wagon roof, I will bark.

Although Dowd’s book comes to a halt after the conventions last summer, her bottom line is that Trump is a dangerous buffoon, while Clinton is a “my way or the highway” paranoid money glutton. She thinks Hillary could not convince voters that “It’s my turn, dammit.” On the flip side, she believes Trump voters such as Dowd’s conservative brother Kevin are able to look past his “blingy playboy” past, his sexism, his bigotry, his “megalomaniac showman” persona and see America being made great again. 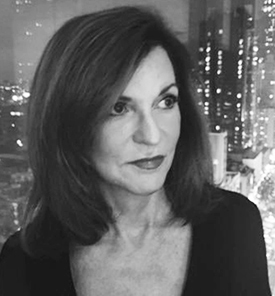 Regular readers know that Dowd’s feelings about Clinton, once favorable, have curdled.  Lest readers think she is now a shill for The Donald, she has regularly castigated him, too. “Both candidates,” she writes in her introduction, “have a Nixonian streak and a fluid relationship with the truth, and both love to play the victim.”

As the “Tang-colored” Donald got his campaign underway in August 2015, Dowd confessed, “I enjoy Trump’s hyperbolic, un-PC flights because there are too few operatic characters in the world. I think of him as a toon. He’s just drawn that way. And his Frank Sinatra lingo about women aside, he always treated me courteously and professionally.”

Trust me, journalists like it when politicians return their calls.

Dowd reminds readers that 24 years ago she felt positive about Hillary. She applauded when Bill the Big Dog dared to put his wonky wife, who resisted what Dowd acknowledges as the “antiquated role” of first lady, in charge of health-care reform. “I proclaimed her appearance ‘bravura,’ ‘polished’ and ‘brimming with ‘crystal clarity.’”

The two women sipped wine together in May 1992 “at a revolving restaurant in Covington, Kentucky.” Hillary “was relaxed and interesting.” She told Dowd about one summer job at a fish factory in Alaska. Hillary described the fish as “purple and black and yucky-looking.” She complained about their quality to her boss. He told her to shut up. She didn’t and was fired. She found another job. “I was impressed,” wrote Dowd. “It showed her strong will and her desire to make the world a better place, even one fish at a time.”

That was then; this is now: the Clintons “offer a Faustian deal and it’s purple and black and yucky-looking.” According to Dowd, the Hillary who believed in women’s rights also wanted voters to forget her “humiliation” over the Lewinsky affair. Then there was the “truckload of gifts” Hillary took upon departing the White House in 2009, her “greedy Goldman Sachs speeches,” the Clinton Foundation issues, email server mess, HRC’s “distaste for the press,” blah, blah, blah.

The topper, a thrice-quoted knock (from a “top Clinton aide”): “Hillary, though a Methodist, thinks of herself like an Episcopal bishop who deserves to live at the level of her wealthy parishioners, in return for devoting her life to God and good works.”

Trump’s Mar-a-Lago Presbyterianism gets a pass.

Dowd is convinced that there exists a good Hill vs. bad Hill “duality.” Her darker side “causes her to make decisions from a place of fear… dulls her sense of ethics and… compels her to do anything to win.” It stems from childhood anxiety. Quoting Carl Bernstein’s biography of Hillary, Dowd writes that these “insecurities grew from her herculean effort to win paternal praise.” Her Dad just couldn’t express “pride or affection.”

Nestled in this book are numerous biting columns and comments about the other contenders in the Democratic and Republican primaries, as well as Presidents Obama and George W. Bush.

I had forgotten how viperish Dowd has been about Obama, whom she often referred to by his youthful nickname “Barry.” He was the fellow who “promised to make government ‘cool’ again. But it just became more dysfunctional.” She faulted Obama for being “detached” and uninterested in partisan party battles. As late as his 2015 State of the Union address, Dowd sneered at “our sleek, techie president, whose battery dies faster than an iPhone’s….” He delivered a full-throated defense of the economy; Dems whispered, “Wow, he’s got a pulse.”

Maybe Maureen slipped the President an extra iPhone battery pack last summer. Suddenly, as Obama launched his personal campaign for Hillary, Dowd elevated him to one of the “purest brands in Washington,” sadly “contaminated by Hillary’s “goo”—which included the spanking by FBI Director James Comey, another pure brand on Dowd’s list.

Her disdain for Bush “43” does not need to be revisited here. The Bush whom Dowd is really interested in is… Poppy.

Yup, the read-my-lips Bush, the sky-diver, the president who bequeathed Clarence Thomas to the nation. This is the book’s big reveal: a lengthy original piece about her good buddy and pen pal, George the First.

It is also the most interesting section of the The Year of Voting Dangerously, although I’m not sure what “41” had to do with 2016, besides being the father of a disastrous Republican primary candidate. Dowd’s essay shows how she can still write compellingly, how even now she can infuse with life a frail Waspy blueblood once dismissed as a wimp. To do so, she relied upon a trove of correspondence with the former President that she kept private “while his sons [read: Jeb] were still running for office.”

GHWB and MD were initially suspicious of one another, but “improbably… somewhere along the way…[we] grew to appreciate each other…. our relationship came to resemble a ’30s screwball comedy, where a jaded working-class newspaper gal (Jean Arthur) and a buoyant Ivy League big shot (Jimmy Stewart) reach across class and cultural chasms, past spirited disagreements, to discover real affection.”

One note from Bush to Maureen said, “I like you. Please don’t tell anyone.”  She liked him, too. He enjoyed being “goofy,” like when as CIA director he signed notes “Head Spook.” He was “modest for a politician.” He admitted falling asleep during a Ronald Reagan movie. What he didn’t like were her vehement anti-W columns after George W. Bush became president. And Poppy Bush was “devastated that Jeb would not be 45, helping to redeem the family name after 43’s blunders….”

Earth-shattering? No. But her GHWB section is a genteel break from snarkiness. And there are other fine pieces in The Year of Voting Dangerously. For instance, try the 2013 “Welcome to Ted Cruz’s Thunderdome, the Detritus of the Government Shutdown.” A black comedy set in “a place once called Washington” at the Lincoln Memorial, it begins, “An ape sits where Abe sat.”

Finally, there’s Kate McKinnon. Dowd’s interview with Saturday Night Live’s brilliant stand-in for Hillary included this question: “Your colleagues… say you wanted the Hillary impression to be funny but also vulnerable, not a mean-spirited takedown. How do you find the line between sharp and mean?” McKinnon replied that she would be “horrified” if someone got “upset” at a parody she did of that person.

Once upon a time, Maureen Dowd herself was able to find the line between sharp and mean. Sadly, after reading this book, I’d say the needle has veered toward the latter.

Grace Lichtenstein is a former New York Times reporter and bureau chief, the author of six books and a contributor to numerous national magazines. She voted for Hillary Clinton for President.

You may enjoy other NYCitywoman articles by Grace Lichtenstein: Joni Mitchell: Woman of Heart and Mind…and Ego; ‘Battle of the Sexes’ Tennis, Triumph, Trauma; Seven Truly Essential Apps for Your iPhone; Best Books About New York City; and Touring France With Comfort On An E-Bike.