Thousands of books have been published about New York City. How can readers know where to start? 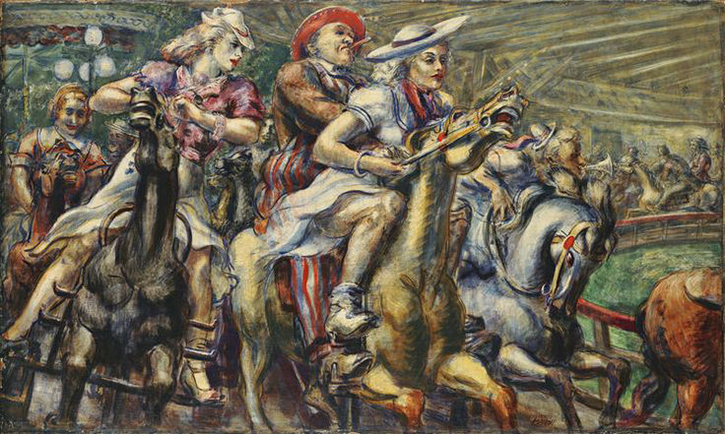 Wooden Horses (1936), by Reginald Marsh. From the book, Coney Island.

The New York Society Library about is one of the oldest and most distinguished in the U.S. Founded almost three hundred years ago in 1754, the library houses more than three million books as well as numerous pamphlets, maps, newspapers, manuscripts and photographs. And beginning twenty years ago, a distinguished jury of writers and editors have been chosen to select a handful of books for the libraries’ annual New York City Book Awards.

This past May the awards ceremony was held at a gala reception in the library’s grand Italianate townhouse on 53 East 79th Street. The first announcement of the awards in 1994 described the ideal winner as “a book of literary or artistic quality about New York City or any aspect of it, past or present, public or private, which evokes the city’s spirit, catches its essence, or brings at least some part of it alive.”

The first jury in 1995 was chaired by Christopher Gray and included Jacques Barzun, Joan K. Davidson, Alfred Kazin, Elizabeth Barlow Rogers, and Wendy Wasserstein. As the first winner, they chose Kenneth T. Jackson’s The Encyclopedia of New York City, published in 1995. This year awards were given to books that represent a wide range of subject matter.

They include Coney Island: Visions of an American Dreamland, 1861-2008 by Robin Jaffee Frank; Prince of Darkness: The Untold Story of Jeremiah G. Hamilton, Wall Street’s First Black Millionaire by Shane White, City on a Grid: How New York Became New York by Gerard Koeppel and One Righteous Man: Samuel Battle and the Shattering of the Color Line in New York.” One choice, The Hornblower Award, is reserved for a first book; this year it was Reading Publics: New York City’s Public Libraries 1754-1911 by Tom Glynn. 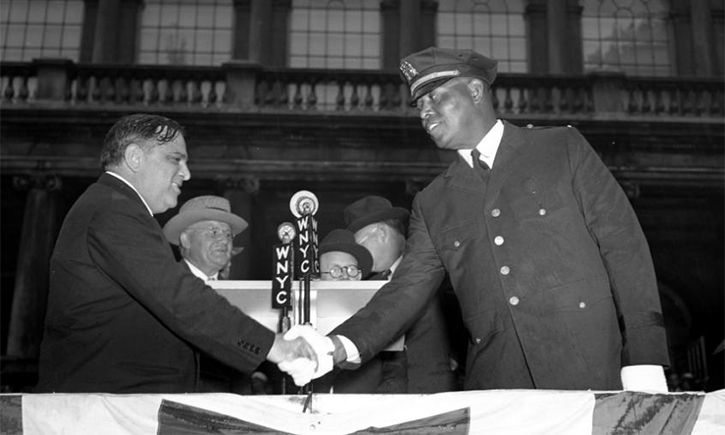 Mayor Fiorello La Guardia and Samuel Battle, from the book One Righteous Man: Samuel Battle and the Shattering of the Color Line in New York.

This book prompted feminist Vivian Gornick to tell the assembled guests a personal story: When she was eight years old, her mother took her to the local New York City Public Library branch, a storefront in their working class immigrant Bronx neighborhood. “Sitting at the desk,” Gornick recalled wryly, was an imposing woman with “gray hair and steel-rim glasses [who could have been] Edith Wharton or Eleanor Roosevelt.” Gornick’s mother pointed at her daughter’s head and said: “She loves to read,” whereupon the librarian took Vivien to the children’s section and said, “Start here.” “I went around that whole store, that whole library until I went to City College,” Gornick recalled. “I can’t tell you how much that is New York to me.”

In addition, the library honored two iconic New York City writers with a special citation of merit: Vivian Gornick, critic, essayist, memoirist and biographer was cited for her book, The Odd Woman in the City: A Memoir (Farrar, Straus, & Giroux), a group of essays about seeing the city “at eye level.” And Roger Angell was cited for his book, This Old Man: All in Pieces (Doubleday), his latest collection of articles originally published in The New Yorker.

“It’s hard to believe no one thought of this before,” said head librarian Carolyn Waters. Over the past two decades, awards have gone to such indispensable books Writing New York by Phillip Lopate, ’Tis by Frank McCourt, Morgan: American Financier by Jean Strause, AIA Guide to New York City by White and Willensky, The Amazing Adventures of Kavalier and Clay by Michael Chabon, Triangle: The Fire that Changed America by David Von Drehle, The Island at the Center of Manhattan by Russell Shorto, New York Burning by Jill Lepore, Harlem: A Century of Images by Thelma Golden and Open City by Teju Cole. 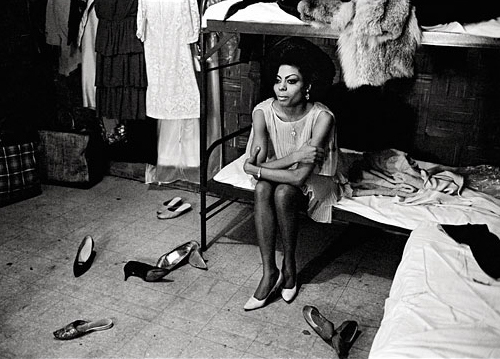 Diana Ross backstage at the Apollo Theatre, 1965. From Harlem: A Century of Images.

According to Lucienne S. Bloch, the chair of this year’s 12-member jury, “the 20-year roster of winning books is a reading list of courses taught for an extremely advanced degree in understanding New York.” Adds librarian Waters, the jury casts “a broad net” for nominees and there is no set number of titles honored each year.

Librarian Carolyn Waters, who at 52 is youthful and brown-haired, does not resemble Wharton or Roosevelt in the least, but she is also a forceful advocate for books. Waters began her working life in finance, but some years ago she left the field and began training to be a librarian. “I had always been a reader and got to a point where I realized I hadn’t read a book in five years, I was so busy with work,” she explained. She subsequently began working at the New York Library Society and took over as the chief last summer. With its 300,000 volumes, all housed in the one building, and 4,000 acquisitions a year, “the library’s biggest challenge is for space” she points out, “for both books and people.” The library currently has 12 floors of stacks; a large communal study and writing room, private study rooms; a children’s library; a members’ room with comfortable armchairs, couches and soft lighting for reading; and several galleries of art.

The “society” in its title might be misconstrued. As Waters told me, “society” in the 18th century “simply referred to a group of individuals. In our case, [it’s] the founders of the Library, who felt that a library would help the city to prosper.”

One Righteous Man: Samuel Battle and the Shattering of the Color Line in New York by Arthur Browne (Beacon Press)

Empty Mansions: The Mysterious Life of Huguette Clark and the Spending of a Great American Fortune by Bill Dedman and Paul Clark Newell, Jr. (Ballantine Books)

The Phantom of Fifth Avenue: The Mysterious Life and Scandalous Death of Heiress Huguette Clark by Meryl Gordon. Biography of the reclusive copper heiress who spent her last years living in hospitals. (Grand Central Publishing)

The Richest Woman in America: Hetty Green in the Gilded Age by Janet Wallach (Anchor Books)

The Last Mrs. Astor by Frances Kiernan. Biography of Brooke Astor, the doyenne known for her fortune, her manipulative son and her contributions to New York City. (W.W. Norton & Co.)

The Remarkable Rise of Eliza Jumel: A Story of Marriage and Money in the Early Republic by Margaret A. Oppenheimer (Chicago Review Press)

You may enjoy other NYCitywoman articles by Grace Lichtenstein: Joni Mitchell: Woman of Heart and Mind…and Ego; ‘Battle of the Sexes’ Tennis, Triumph, Trauma; Touring France With Comfort On An E-Bike; and The Year of Voting Dangerously.