The president and CEO of the New York Philharmonic made it a priority to have women composers in this season’s lineup. 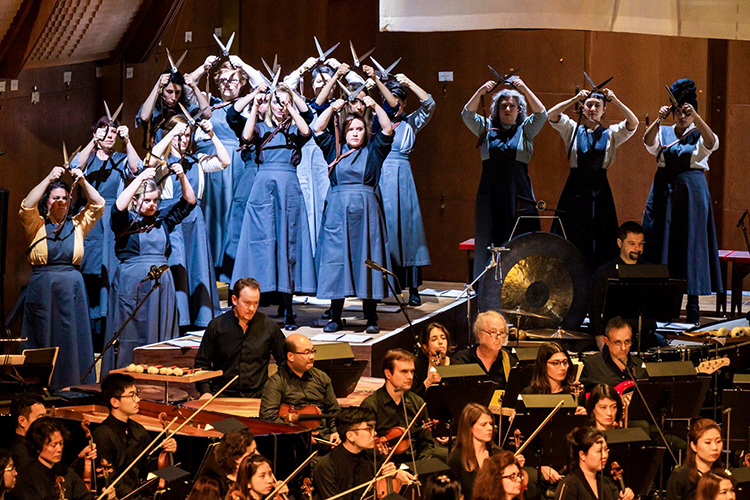 Deborah Borda, the president and CEO of the New York Philharmonic, is determined to make this great orchestra relevant to all ages, ethnicities, countries of origin, economic groups, plus anyone who may not know a great deal about classical music—as well as those who do.

This coming season she and Music Director Jaap van Zweden are celebrating the centenary of the passage of the 19th amendment, which gave women the right to vote, with Project 19, the commissioning of new works by 19 women composers.

It is the largest female-oriented commissioning initiative on record and fits with Borda’s reputation as a bold leader; she is indisputably the most powerful woman in the classical music world.

Borda told me the orchestra was looking for a “suitable” way to honor what she calls “a shift of the tectonic plates within American society.”

A cheerful, assertive woman of 69, Borda originally studied to be a violist. She moved into management early and ran the Philharmonic in the 1990’s before moving on to be head of the Los Angeles Philharmonic. Borda returned to the New York Phil two years ago with a portfolio of initiatives. During the current season, the orchestra welcomed its new music director, Jaap van Zweden, for its first full season with programs on “New York Stories: Threads of the City” and “Music of Conscience.”

The season opened with a buzz: The world premiere of Ashley Fure’s “Filament,” an unusual piece with several players positioned at various spots among the audience. It was not the only world premiere that happened to be by a woman: later in the season, “Fire in my mouth” by Julia Wolfe, an oratorio about the 1911 Triangle Shirtwaist Factory fire arrived, its choristers armed with scissors. 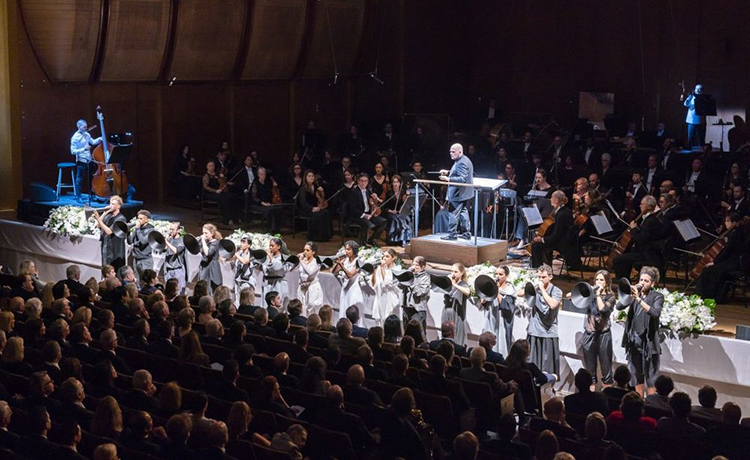 The Philharmonic season opened with the world premiere of Ashley Fure’s “Filament,” under the artistic direction of maestro Jaap van Zweden, conducting (in center). Photo by Chris Lee.
. . . . . . . . . . . .

That was just the beginning of Borda’s second tenure. After 17 years in Los Angeles, she was won over, she said, “by the challenges that lurk here in her hometown.”

When she packed up her “covered wagon” to head west, she thought she’d be at the LA Phil for about five years. She had “a great time” and her leadership was widely applauded, as she oversaw the hiring of dynamo conductor Gustavo Dudamel, the building of the Frank Gehry-designed Walt Disney Concert Hall and the musical growth of an orchestra into one of the most adventurous in the United States.

She expected to retire from that job. Then the New York Phil, deep in debt, faced with possible exile while its Lincoln Center home was being renovated, came calling.

Why answer the call? Firstly, “I’m a New Yorker,” Borda said. “To use a California word, I felt it was my karma to get this project done, and I think I have I have the right people and the right tools.” 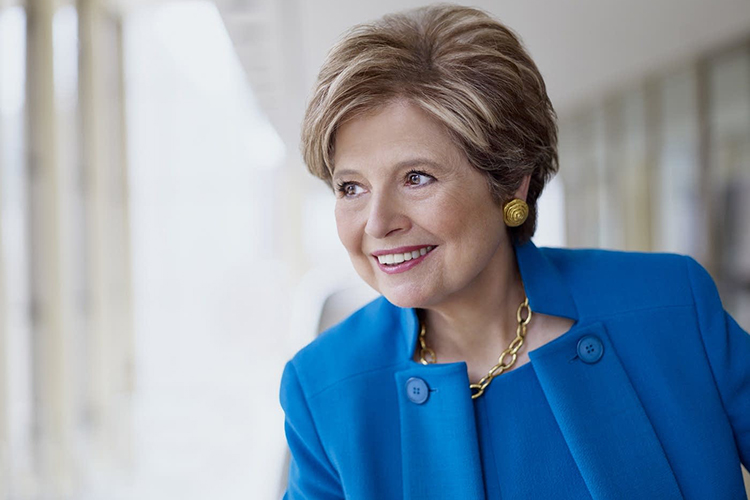 At the New York Phil, her days are filled with meetings about everything from fundraising to marketing to touring. “I’m very involved in working with our music director in terms of setting the artistic policies,” she said. Along with the maestro and her vice president of artistic administration, she spent hours listening to the music of living female composers who were being considered for the 19 commissions.

The selected group is diverse in age, career status, ethnicity, background. Borda explained, “we started off with a list of people who were right at the top of the list, somebody like Joan Tower who is the dean of American women composers to younger people. The process, which might include watching You Tube videos, was “a lot of fun.”

Does she look for specific musical elements? “It’s like what do you look for in a great painting,” she replied. “You look for essentially something that moves you. You have to feel it has substance and excitement or tranquility, that it takes you to a special place. There isn’t a technical checklist; there is an emotional checklist.”

One of the 19, Unsuk Chin, will have her 2009 Sheng Concerto played at an October concert of the New York Phil next fall. (Her Project 19 commission will be played in a future season.) Next winter there will be three weeks of Project 19 world premieres. The composers are as fired up as Borda is.

“The fact that the Philharmonic is being a leader in this type of proposition—it’s very exciting,” said Tania Leon, at 75 a senior stateswoman in classical music, who will also curate one Night Cap series of late evening concerts for next season. “It was necessary for us to start paying attention to the writers of our time.” 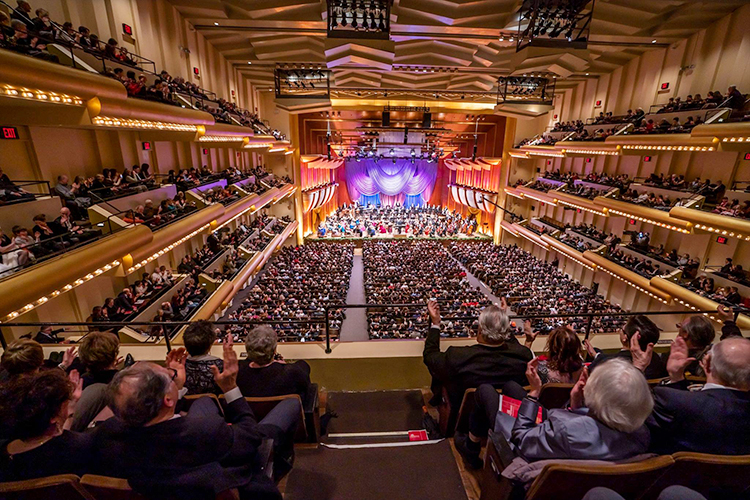 Borda made it a priority to have women composers in this season’s New York Phil lineup. “Fire in my mouth” featured the full orchestra, adult and children’s choruses and a semi-staged presentation with film, poetry and the sound of live scissors and string motifs that sound like sewing machines. It was a sellout. This project also included ancillary events at places like the Tenement Museum and the display of a memorial quilt for the fire’s victims.

Borda made no bones about the immigration connection—almost all the 146 people who died in the fire were immigrants. “As you see waves of immigration to the city, so goes the New York Phil,” she told The Wall Street Journal.

As enmeshed as she is in Project 19, Borda is also exceedingly aware of imbalances in the makeup of orchestra players and conductors.

She was quick to note that the NY Phil is half-and-half—50 percent of the players are female. When I mentioned I had seen the Vienna Philharmonic recently and counted almost no women, she chuckled. At one time, she said, the authorities in Vienna believed women would not be able to perform as well when they had their periods, or when they were pregnant.

As for women conductors, the pipeline is just being filled now. On this front Borda has agreed to chair the jury for a conducting prize competition in Paris in 2020, which will be limited to women for the first time.

Borda has even been active in getting the NY Phil on the radar of younger listeners and those who can’t afford $150 seats. Earlier this spring it held an event called “Phil The Hall,” where tickets were $5 to anyone and free to many first responders, city employees and their families.

The podcaster and new-music advocate, Nadia Sirota, came on board last fall to host special smaller concerts for all ages with the emphasis on new works. “It’s incredible to see these engaging creative brilliant women making incredible works of art and it’ll be great to see them in a more intimate chamber setting,” she said of Project 19.

And maestro van Zweden’s attitude? “I myself was brought up by a very strong mom, and I was educated by very strong women,” including legendary violin teacher Dorothy deLay, he told a gathering moderated by Borda. “So it feels very natural to have these 19 fantastic composers. And again, I am surrounded by a very strong woman. Here she sits!”