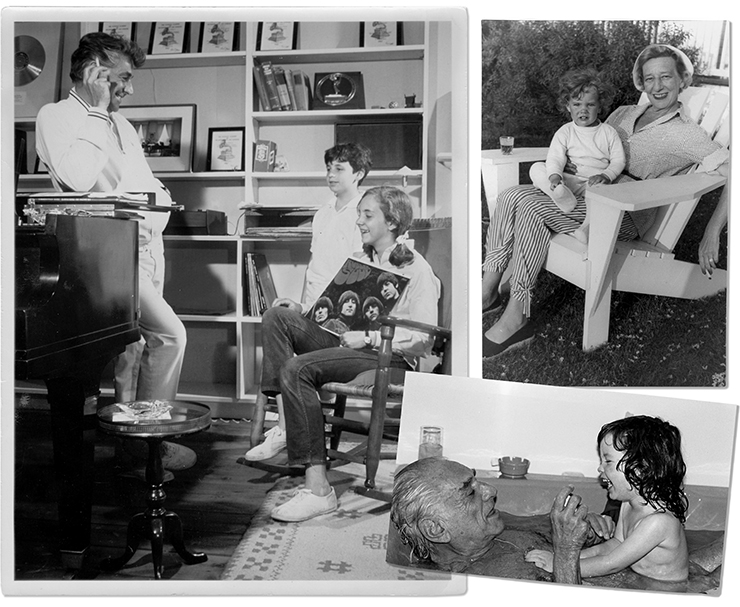 Jamie Bernstein, the oldest daughter of composer and conductor Leonard Bernstein, opens the door of her modest Chelsea apartment. Herbie—her part-Catahoula hound and shelter-rescue partner—greets me as if I am a long lost best friend. Jamie invites me to sit with her at a dining table next to a sideboard crowded with family material that includes two massive Leonard Bernstein box sets, one containing the Mahler symphonies and the other containing CDs of Bernstein’s original works. There’s also a stack of postcards advertising Jamie’s wonderfully written new memoir Famous Father Girl, a candid recollection of what it was like growing up as the first daughter of Bernstein and his actress wife Felicia Montealegre.

Jamie, petite and attractive, has a head of blond-highlighted hair and wears casual New York City black. Now 65-years-old, she’s at home briefly in between a hectic schedule of making appearances at some of the three thousand concerts and events where she and her younger brother Alexander and sister Nina were invited to celebrate Bernstein’s Centennial year. With a robust and pleasingly theatrical voice, Jamie’s lineage is clear. Although her siblings are also involved in the Bernstein office and Centennial doings, Jamie has become the public face of the family.

After graduating from Radcliffe Jamie set out to launch herself as a singer and songwriter, hoping to set herself apart from her glamorous parents. But she admits, “It’s very hard to find your own light when you live in the blinding sun.” These days, she says, it matters less. “I just don’t have that preoccupation any more. My life is what it is, my dad was who he was, and actually it’s kind of interesting.” The Centennial celebrations, now in their second year, have become “holistically satisfying in every possible way.” Indeed, the family has just granted the exclusive music rights to the award-winning Bradley Cooper who plans to direct and star in the upcoming film “Bernstein,” a Paramount biopic with Spielberg and Scorsese as participating producers. Other films about Bernstein are also in the works. 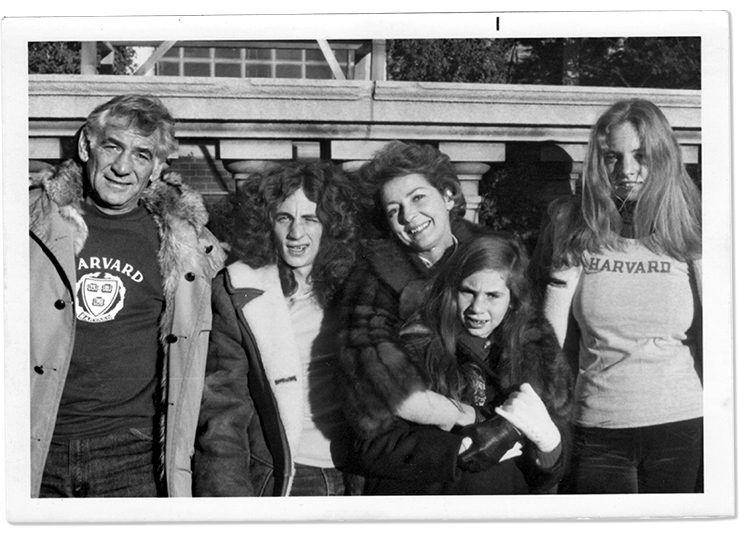 Among her activities, Jamie, who was raised bilingual due to her Chilean mother and household staff, has been narrating her own version of young people’s concerts—one of Leonard Bernstein’s great legacies—sometimes in Spanish. She particularly loved a recent kids’ concert in Spain, where she led the audience as they shout “Mambo!” from West Side Story.

“It’s a little bit goofy because I’m a little bit goofy,” she says wryly. And she sometimes performs her own version of the narration accompanying Symphony No. 3, Kaddish. The narration was originally written for her mother, who died prematurely of cancer at the age 56. “The music sounds totally modern and totally urgent, as if it had been written last month,” she explains. As to her absolute Bernstein favorite? “Depends on when you ask,” says. The week when I interviewed Jamie, Serenade, a kind of violin concerto, topped her symphonic works chart.

Not all of Jamie’s legacy has been rewarding. As the daughter of the charismatic musician who defined “Maestro” on the American classical music scene in the second half of the 20th century, growing up could also be a trial. Sure, Leonard Bernstein was affectionate and fun when he was home; the family played word games, the kids watched their parents hold fabulous parties with plenty of drinking and smoking.

As Jamie writes, the maestro was always kind of outrageous. At breakfast, in his scratchy bathrobe, with his “characteristic Daddy smell” of “nicotine and flatulence, he would announce, ‘I’m getting stinky.’”

Off he went to the bathroom and “sit contentedly on his porcelain throne” with the door open. One day Jamie tried to interrupt him while he was sitting there smoking and studying a score. “Oh, I’ll be with you in a minute, darling—let me just finish this movement.” Then he “exploded in laughter… [and] explained to me why what he’d said was so funny. There simply was no moment when Leonard Bernstein wasn’t being a teacher.”

He was also away from home a great deal, conducting all over the world. Jamie was born and lived much of her life in Manhattan, where the family lived first at the Osborne on 57th Street, then on Park Avenue and finally at the Dakota on West 72nd Street. Jamie attended Brearley School, but on weekends the family went to the country, where a Fairfield, CT estate with its “Esther Williams swimming pool” became (and still is) the place for rollicking get-togethers. 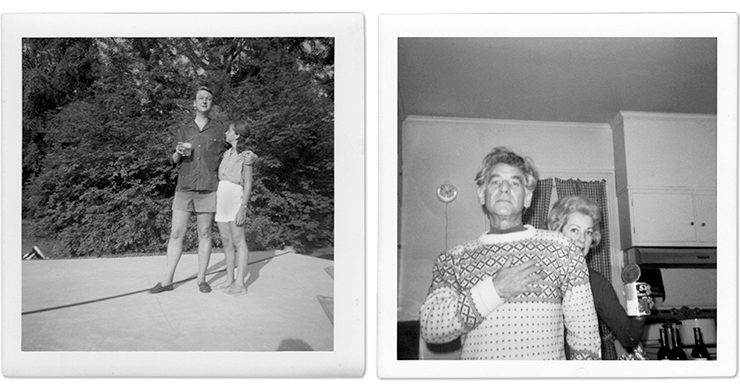 Jamie reveled in some of her father’s famous friends like Mike Nichols and Stephen Sondheim, a bit less in Lillian Hellman and others. Her father’s siblings, Burton Bernstein (the late New Yorker writer) and Shirley Bernstein, were a constant presence.

But Jamie could understand how her mother tired of playing “Mrs. Maestro,” despite her elegant Chanel suits, Dior evening dresses and other closet treasures. And Felicia had an expression for the cringe-worthy moments when the Maestro’s uninhibited speech embarrassed her: “Tierra, trágame.” (Earth, swallow me.)

But both parents were committed liberals: J. Edgar Hoover had a huge file on LB. And therefore a low point in their activism came in 1970 when Felicia held what she thought was a private, serious evening supporting the Black Panthers, who were in jail. Both Charlotte Curtis of The New York Times and Tom Wolfe sneaked in.

When Wolfe’s “snide little piece of neo-journalism,” (as Jamie describes it in her book) about “Radical Chic” appeared in New York magazine, Felicia “bore the brunt of the humiliation.” On what turned out to be the day Wolfe died, Felicia told me, “I hope he knew that he did some damage in my family and we didn’t forget that.” 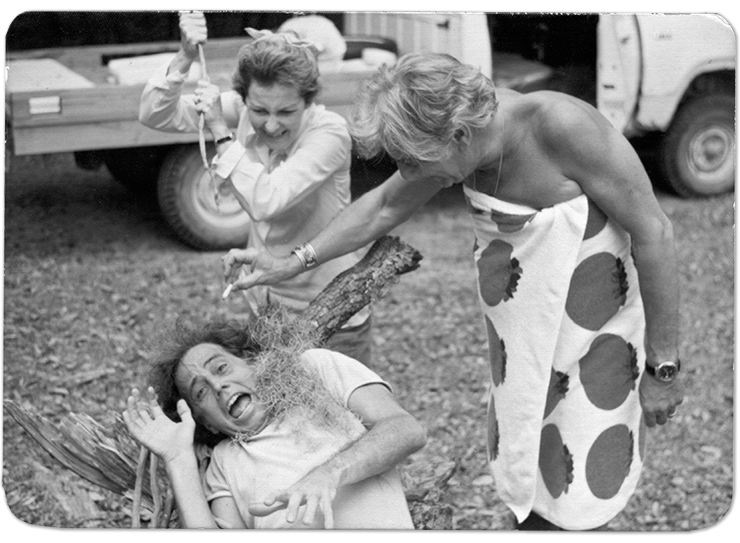 Even more problematic was Jamie’s accidental discovery of Leonard Bernstein’s bisexuality while spending a summer as a teen at Tanglewood, her father’s early career home. She heard stories of his antics there with other young men. She confronted her father; he in essence denied it. Almost until her mother’s death, he kept himself in the closet.

Jamie speculates that one reason he didn’t mind being over-scheduled by his manager—sometimes to the point of exhaustion—was that “it gave him less time to dwell on all the thoughts that tormented him.” He finally left the family to live a more openly gay life. Indeed, Jamie had an affair with a musician whom she thought might also have had one with her father.

Lenny visited the Dakota often, but it was difficult. At one dinner Felicia angrily declared, in front of Jamie and Alexander, “You’re going to die a lonely, bitter old queen.” Felicia who had earlier gone through a bout with breast cancer, was diagnosed in 1977 with lung cancer, just when her husband left his male lover to return to the family fold. He took care of Felicia. Jamie writes movingly of her beautiful mom’s final days. She died in 1977. Afterward, according to Jamie, “in the absence of Mummy, Daddy was as untamed as a sail flapping in a squall.” Felicia had been the presence that kept his flamboyance at bay.

Jamie sought to find herself in a pop-music world of dominant men and drugs: She and her brother smoked a lot of pot together, but she was able to remember so many details for the book because she kept journals. Meanwhile, the Maestro—an insomniac—would sleep until late afternoon. Soon he became dependent on alcohol and barbiturates to put him to sleep and amphetamines to keep him awake. He romanced younger and younger men. Always a big hugs guy, he took to French-kissing everyone, including his daughter.

By the time Jamie married David Thomas, a TV executive, in 1984, her father, as she writes, had “become so difficult to love so much of the time.” How did she and her siblings manage to handle all this?

“Of course it was very confusing and sometimes it was hard to take. The one thing we never doubted was that we were completely loved,” she said. “Even if things were tough we never questioned that essential love, and that will get you through a lot of stuff.” She was also grateful she could totally share her confusion with Alexander and Nina.

I wondered, in this #MeToo age, how her father’s sometimes “obnoxious” behavior would have fared. “Good question,” she replied. “I worry that some aggrieved person who felt that they didn’t get enough attention from my dad might frame something in a derogatory way. I think a lot of that behavior would be questionable now. It’s just a different world.” As for the French-kissing? “Lots of guys used to do that. It’s a power thing. I bet you Donald Trump does it all the time.”

With Famous Father Girl just appearing, and Bernstein Centennial appearances on tap for the rest of the year, Jamie, now divorced, is glad that her son Evan, 28, currently lives with her so he can care for Herbie when she is away.

Evan does “a little of this and a little of that,” including working with a voice-over coach. Her recently married daughter Frankie Jay Thomas, 31, (named for the character in Member of the Wedding) is a published author who has been accepted by the prestigious Iowa Writers Workshop.

What’s next for Jamie? To judge by her skill with words and story-telling, another book would seem logical. She herself doesn’t know. Speaking as she does in apt metaphors she says, “stay tuned.” 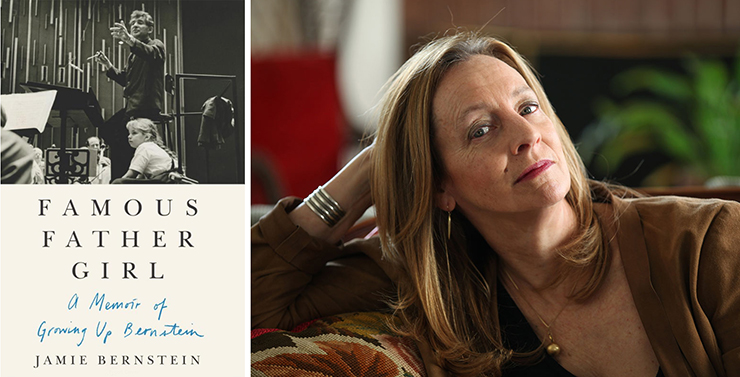