A robot was involved, and swear words were uttered, but healing time was remarkably quick 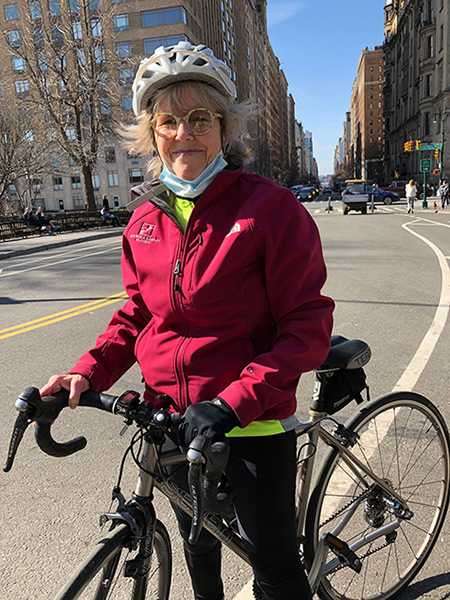 For my 80th birthday, I got one-half of a new knee. That is, I had partial knee replacement surgery to repair a gimpy, arthritic joint.

Many women, mostly at a younger age, have had full replacement, sometimes of both knees. The reasons are typically to relieve pain and return to activities even as rudimentary as walking, which were made difficult by arthritis or just a lifetime of wear and tear.

My goal was to get back to the sports I loved—bike riding (often in Central Park, near my Upper West Side apartment), skiing, and hiking. I had been able to ride, but walking was tough and skiing was impossibly painful.

More than a year ago, when an orthopedist had suggested a full-knee replacement, I was dubious and went for a second opinion from Dr. Steven Struhl, whose website name just about says it all: shouldersandknees.com. Well, not quite all. Struhl is on the NYU Medical School faculty. He teaches as well at the Hospital for Joint Diseases, consults for the Brooklyn Nets, and has an upbeat, brisk manner. He assured me—and proved it by showing me on my X-rays—that despite my arthritis, only the inside left (medial) part of my knee was damaged. 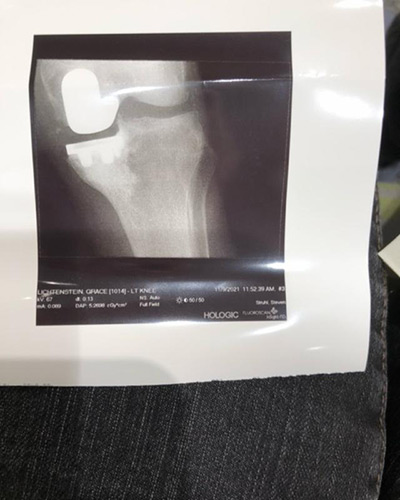 According to the doc, partial knee surgery would not even require an overnight hospital stay, and would heal faster with physical therapy than if I went for full replacement. In one to three months, I could resume all activities. I settled on Thursday, November 4th for the operation, which took place at the NYU Langone Orthopedic Hospital on Lower Second Avenue, diagonally across town from me. My plan was to climb back on a real bicycle on Christmas Day, a bit over seven weeks later.

My sister Laura Dankner volunteered (no coercion) to stay with me for the first few days, since I live alone. Preparation the night before surgery involved buying a Breads Bakery cinnamon babka. At 5 a.m., we arrived by cab at the hospital.

Guided by the miraculous Mako Robotic Arm, the doc performed his magic. The robot takes the information from an earlier CT scan and helps the doc as he prepares the bone and the implant. (Contrary to belief, a physician must take control—not the robot.) I awoke, totally doped up, at about 11 a.m.

For the next several hours in the recovery room, with my knee swathed in a huge wrap, nurses gave me elementary exercises and had me walk, slowly, with a walker. It was the last piece of equipment I wanted to be seen with, but that’s how I left the hospital. The doctor said the walker would be needed just for a day or so.

Back at home that evening, I was able to take a few steps without any assistance, admittedly with the help of Percocet to numb the pain, which was considerable. The dope worked its magic—After eating a third of the babka for dinner (it was yummy), I went to sleep that night with my leg propped up on pillows.

My poor sister endured battles with me to take it easy, to ice comfortably, to stop showing off for neighbors. Because I am four years older, I am used to giving her orders, not the other way around. Things came to a head Saturday when I panicked about a suture that was leaking blood. Laura finally shouted, “You’re not dying!”

I should say here that we are typically quite close. I rely on her calm judgment often, though clearly not in this case. Looking back, I was terrified not of leaking blood, but of being left on my own—on Marathon Sunday, when my block was an armed camp as it was the key exit for runners.

Laura left for home, as planned, on Sunday morning. A Visiting Nurse Service physical therapist came to show me some basic exercises to perform, while an RN showed up to check my vitals. (Thank you, Medicare.)

Within a week, I was doing much better. Family and friends pitched in with visits, meals, encouragement. And while I rejected a cane, I did accept crutches, which I used to visit the doc in his office five days after surgery. Seeing my progress, he proclaimed “f**king awesome.”

He said to discard all assistive devices when possible. One day I marched into Central Park with hiking poles, which visually warned others to keep away from me. That same day, I attended my regular class at Hunter College—the history of Latin American revolutions. The next day, the physical therapist measured the bend in my knee at 112 degrees, 125 being normal. I was ahead of schedule.

Within two weeks, the stitches were out and I was on a stationary bike. The knee was still painful. Not I’m-gonna-faint painful, but hurting nevertheless. I soldiered on, going out for my first dinner with friends. The knee stiffened up when I sat for more than half an hour.

As for going to movies, I had to get up and walk around halfway through. At the doctor’s suggestion, I bought a compression stocking to contain the swelling. By week three, I was ready to face Charles Polit at Artus Physical Therapy on West 72nd Street, near me. A tough but fair guy with a doctorate in PT, Charles put me through new, ever more demanding paces. The drills included lying heel slides from straight to tush, mini squats and standing side kick. Off I went to celebrate Thanksgiving with my family in rural Putnam County.

After three weeks, what I had thought of as my amazing recovery slowed to more incremental improvement—less swelling, longer walks and stationary bike rides, endless exercise reps. In my iPad diary, I noted: “I want this healing s*** to be over.” The bend progressed to 125, matching the angle of my right knee.

Laura returned for a brief visit. “You’re walking normally,” she astutely observed. As for her previous visit? ”Remember when you asked me to stay with you, I said you were the world’s worst patient? I was right,” she said. I started to apologize. “Fuhgeddaboudit,” she said. I’m lucky to have a rebuilt knee but luckier still to have a great sister.

At five weeks, I was 85 percent there. The latest improvement was walking up—and especially down—stairs, which took several more weeks to accomplish. With each passing day, I looked forward to the time when I could park my tush on my real bicycle for a brief ride. At six weeks, 90 percent. Those with full knee replacement typically take three months.

Now it was time to saddle up. So on the cold, damp morning of December 24th, I rolled my mountain bike out of my apartment building, climbed aboard, and went for a happily uneventful ride in Central Park.

Grace Lichtenstein is a former New York Times reporter and bureau chief, the author of six books and a contributor to numerous national magazines.
. . . . . . . . . . . .