Armed with pens, brushes, cameras and wit, artists take on the establishment. 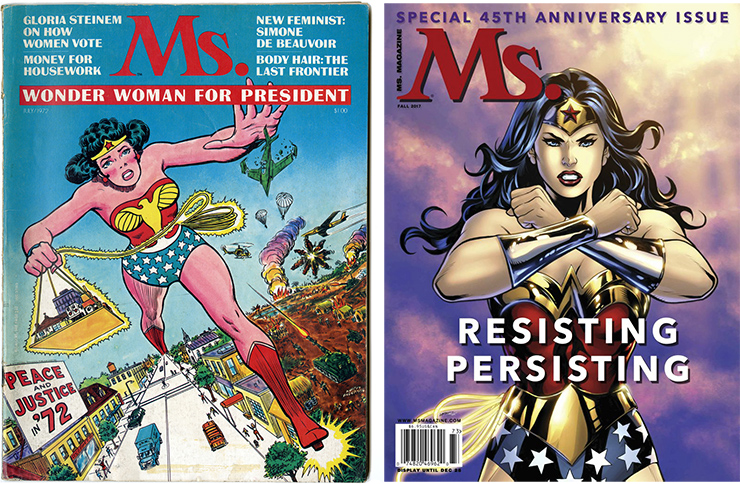 Ever since Trump became president, art museums and galleries have become political hotbeds. Early in 2017 MOMA installed works by Muslim artists from nations whose citizens were refused entry to the U.S. by Trump’s travel ban. The New-York Historical Society collected posters and t-shirts from the historic Women’s March. Now, Cooper Union and the School of Visual Arts (SVA)—schools that have produced some of the nation’s most highly respected artists and designers—have mounted shows that offer trips (often humorous, sometimes painful, always thought-proving) through the art and politics of America’s past and present.

Cooper Union Gallery’s WE DISSENT…Design of the Women’s Movement in New York is a treasure-trove of feminist works—engravings, posters, books, buttons, pamphlets—from the 1860’s, when Cooper Union was founded, to the present. “What became clear as we assembled the materials is that many of the issues just don’t go away—and that the fight continues,” said Stéphanie Jeanjean, assistant professor of art history and co-curator. “People don’t give up.”

Issues central to the women’s movement—education, equality, inclusion, the right to be heard, the right to work—emerged early, when a 10-year-old prodigy, Alice Donlevy, was admitted to the New York School of Applied Design for Women to study engraving (the first such school for females). By 1874 Donlevy was teaching at Cooper Union, and still found time to write and illustrate Practical Hints: Art of Illumination—the bible on design and illustration for many decades. Over a century later, Su Negrin published A Graphic Notebook on Feminism, a collage of 1970’s political works that displays how various art techniques can be appropriated to detail the plight of women and to promote their agendas.

Throughout the history of activist art, connecting with a broad public has been key. In the 19th century, many artists turned to cartoons: “They could make multiple copies and get their ideas disseminated more widely,” said Jeanjean. In the 1920’s, in Paris, posters became popular; by the 1960’s and 70’s, inspired by the silk-screen process, feminist artists throughout the U.S. were creating posters. “The medium was and is the message” says Alexander Tochilovsky, co-curator of the exhibit and associate professor at Cooper Union. “The medium itself may shape the protest and how it can be represented.”

Examples of such shape-shifting media are abundant. Consider the cover of the first issue of Ms. magazine in July 1972, emblazoned with the image of “Wonder Woman For President.” On the 45th Anniversary 2017 edition, Wonder Woman appears again, “Resisting Persisting” and ready for battle. A group of women in the Boston area published a very different shape-shifter in 1971: Our Bodies, Ourselves dared to address sexuality, reproductive health and abortion. The book, a global best seller, is still in print; the organization is still active. Artist/activist Faith Ringgold, who made posters celebrating Angela Davis and the Black Panthers, reached out to children with her 1995 book Aunt Harriet’s Underground Railroad in the Sky.

Virtually the entire history of the women’s movement and the fight against gender and racial discrimination is on visual display. Early in the 20th century flyers from the Suffragettes’ push for the right to vote; Simone de Beauvoir’s The Second Sex published in 1949 led to a tidal wave of seminal works by women in the 60’s and 70’s. Think: Kate Millett, Susan Brownmiller, Gloria Steinem. Here, too, are the works by artist collectives, including the Guerilla Girls—started in 1985 by “feminist activist artists,” whose members expose gender and ethnic bias (and corruption in politics, art, Hollywood) through humorous visuals and public actions while wearing gorilla masks—“our anonymity keeps the focus on the issues.”

Two hundred satirical/no-holds-barred illustrations, posters, cartoons and animations focus on today’s political morass in Art as Witness: Political Graphics 2016—2018 at the SVA Chelsea Gallery. Not surprisingly, Trump and his policies are prime targets in many of the illustrations by the 53 artists (18 of whom are women). Milton Glaser made an early call-to-action via posters in NYC subways; Nancy Burson superimposed Trump’s face on that of Russian president Putin. And more: Victor Juhasz’s Rolling Stone cover of the president as a tornado, Roz Chast’s Trump’s mixed up map of Africa for The New Yorker. “Something about the guy brings out the best in illustrators. He just provokes great work!” says Francis Di Tommaso, SVA’s director of galleries, who co-curated the exhibition with illustrator and SVA faculty member Steve Brodner.

Chilling, apocryphal landscapes of a divided America—by Christoph Niemann, Glenn Palmer-Smith and Victor Junasz to name a few—surely got no laughs from the man in charge at the White House. For the rest of us—including the artists—such satire is an act of survival. “The long tradition of graphic commentary has seen us through the best and worst of times,” comments Brodner. “The need for this collection has only grown with the increasing immensity of our national crisis.”

There are images redolent of the #MeToo movement (Nicole Licht’s sly “Not Yours” poster complete with white pussy) and #NeverAgain (Melinda Beck’s frightening multi-barreled gun). Other images focus on women’s issues: In Olimpia Zagnoli’s “Stress and Pregnancy” that appeared in The New York Times, the form of a woman looks disturbingly like a target, while Yuko Shimizu cleverly paints a woman astride a mountain of eyes, while she brushes eyes off her body. The title: “Dusting off the Male Gaze.”

Not to be missed: a real newsstand papered over with magazine covers by Art Spiegelman and Jeff Scher’s animation of Crosby, Stills, Nash & Young’s “Teach Your Children”—a compelling link between the civil rights and student protests of the ’60s and contemporary protests.

Such freedom of imagination may come at a high personal price: Rob Rogers, a 25-year veteran cartoonist at the Pittsburgh Post-Gazette was recently fired due to his sharp critiques of Trump.

The curators intentionally timed the exhibition to be on view during the run-up of the mid-term elections as an art-driven instigation to get people to think and to act according to their conscience. Di Tommaso remembers fifty years ago when the nation was divided as neighborhoods were burning and people were dying in foreign wars. He wants to incite viewers to do the one thing that truly counts: “Get out and vote!”

WE DISSENT…Design of the Women’s Movement in New York, through December 2. Cooper Union Gallery, 41 Cooper Square