A permanent exhibit at the Museum of the City of New York tracing the past, present and future of the city is drawing praise and crowds. 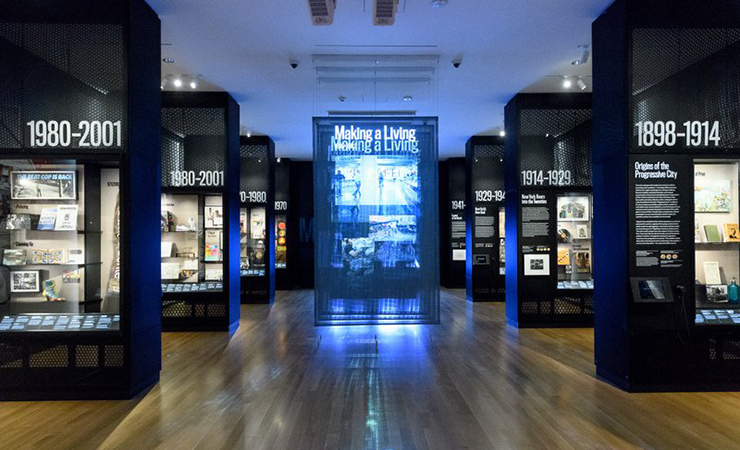 The Museum of the City of New York, once cruelly dismissed by some New Yorkers as a place on Museum Mile to see dusty doll houses, is now the proud home to NY at Its Core, one of the city’s most innovative exhibitions that crowns the museum’s ten-year, $100 million expansion.

The fruit of five years of planning, NY at Its Core takes visitors on a journey through the city’s 400-year-old history. Displaying some 450 objects and images and dozens of interactive displays, the permanent exhibition “takes a frank look at what makes New York New York. It provides a structure to look at the city’s incredibly complex and rich history,” says chief curator Sarah Henry, who is not intent on providing a comprehensive history—that would be way too much for visitors to absorb. Instead visitors are offered enticing glimpses of the city’s multi-faceted life. 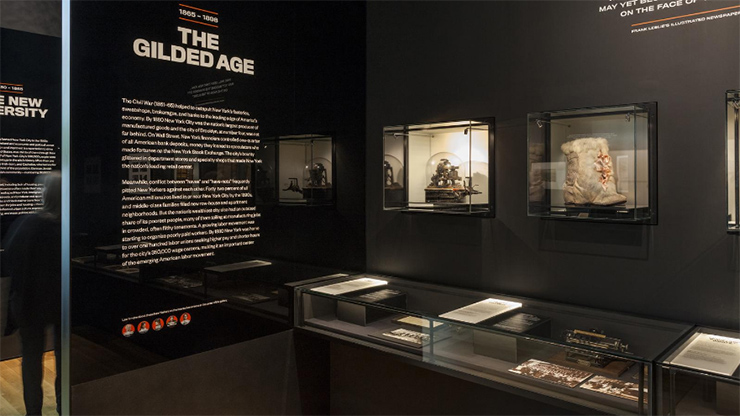 Section of the Port City gallery.

The first gallery, Port City, covers the first three centuries, starting with Henry Hudson, who set sail expecting to find a route to the Spice Islands and instead discovered the river that eventually bore his name. History is also tracked by objects, ranging from a 17th-century Lenape war club to a portrait of Alexander Hamilton (a crowd pleaser), to the diamond, onyx and gold cufflinks that “Boss” Tweed once flashed around town.

Unlike history books of yore that focus mainly on the contributions of men, women are well represented. The 19th century, Henry notes, was a time when women entered the workforce as clerical workers and worked on a new invention, the typewriter—one of which was designed in Brooklyn and is on display. But this is just one of the many city innovations that offered new opportunities to immigrants and others seeking to “make it” in the city—and a splendid example of New Yorkers’ pioneering, creative spirit.

The upper-crust is also highlighted in the exhibit: High-heeled pink satin boots, worn during the Gilded Age, represent a rarified lifestyle that is starkly juxtaposed by a nearby photo: a horse in a street lined with waist-high dung heaps. A clip from the New York Evening Post, Dec. 10, 1824, reads: “No one can cross Broadway but on tiptoe. Ladies can only wistfully cast their eyes from one side to the other.”

Thanks to glowing interactive columns, visitors are given “virtual” introductions to New Yorkers of the past. Some are well known: Peter Stuyvesant, Alexander Hamilton, Boss Tweed. There’s even a biography of the horse—the most important mode of transportation in pre-motor car days—and the resulting “poop problem ” in 1800, enough to cover a football field two and a half times every day!

Other, less well-known New Yorkers provide thoughtful insights into the city’s multi-talented, multi-ethnic, hard-driving character: Here, for instance, is the free African colonist Maria Van Angola and the rough-and-tumble Fredericka “Marm” Mandelbaum, “a mid-19th-century entrepreneur,” who, Henry explains, “made her career as a fence for a network of thieves—a diverse group of pickpockets and swindlers…. She took the stolen goods, monetized them,” and before the law could catch her, she fled to Canada. 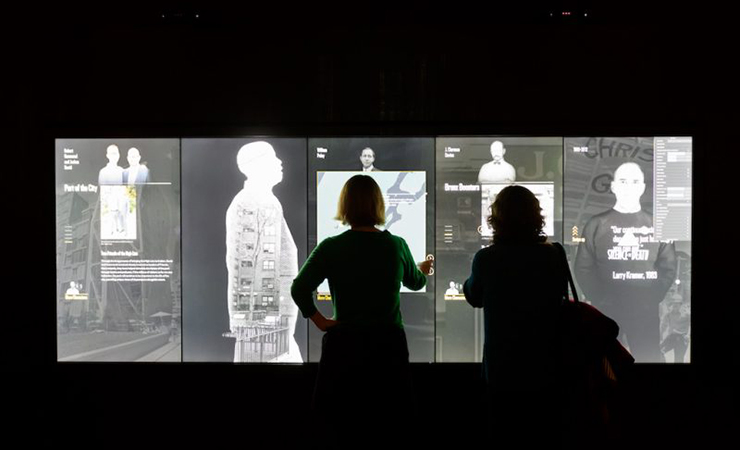 In the second gallery—World City, 1898 to 2012—the pace of the city picks up as the cacophony of taxi horns, sirens and disco beat swirl us into the global city we know today, with all its cultural vibrancy and sharp social divisions. Here, we see videos and objects that track the city’s evolution—socially, financially and artistically: a silver shovel, made by Tiffany’s in 1900, dedicating the ground breaking for the first subway; images of workers balanced on beams on the city’s first skyscrapers; a Studio 54 guest list (including Ringo Star), circa 1978; signs and chilling detritus of riots, demonstrations, September 11. (Ironically, while there is an old paint can and brush from Jackson Pollock’s studio, there is no sign of Donald Trump.) Meanwhile, a wall-sized touch screen moves constantly with silhouettes of the characters who shaped the city: Andrew Carnegie, Robert Moses, Jane Jacobs, Gloria Steinem, Donna Karan, Jay-Z are just some of these formative New Yorkers. 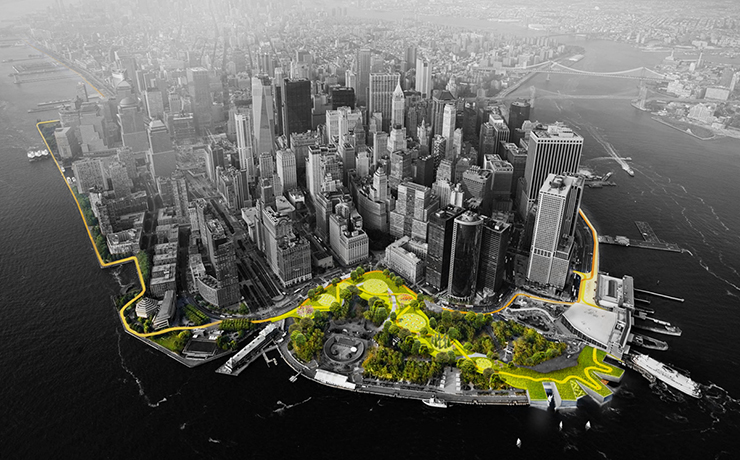 In Future City Lab, the BIG U wraps Manhattan in a ribbon of protective landscapes that will avert billions of dollars of climate-change related damages and protect millions of lives. Photo by BIG—Bjarke Ingels Group.

But perhaps the most popular gallery—and certainly the most innovative—is Future City Lab, where visitors can explore what the museum describes as the five central challenges facing New Yorkers in coming generations: housing; transportation; job opportunities; diversity; and climate change. Designed by Local Projects, the same firm that helped design the National September 11th Memorial, the gallery asks visitors to learn by doing. Thanks to interactive touch screens visitors can, for instance, play the role of a developer, selecting the building materials, the number of apartments and the height of the building. What about job opportunities? You can trail bike messengers and bodega countermen going about their jobs. Transportation? Plan ways to negotiate the city, via boats, self-driving cars, you decide. Various suggestions are then displayed on a wall-sized streetscape, where visitors engage with the suggestions for future life via motion sensors. Nearby, a massive floor-to-ceiling map of the city constantly shifts, detailing demographic trends. 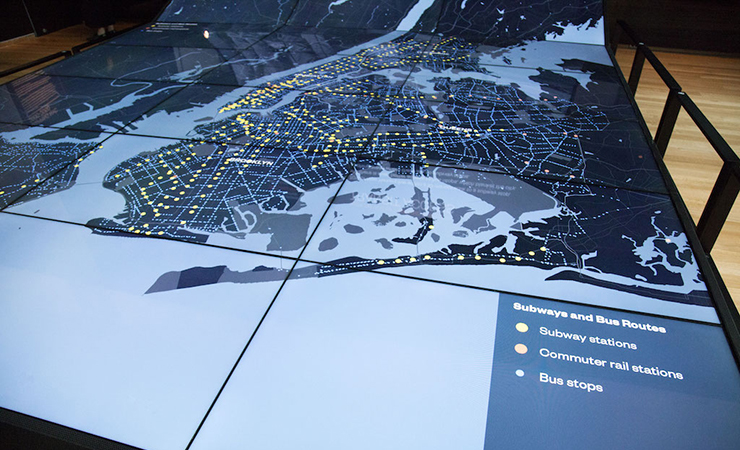 As the format suggests, NY at Its Core is, like New York today, evolving. Henry says that the Future City Lab will be updated with new data and maps as they become available, making repeat trips a must. “Change is the only constant in this city,” Henry notes, adding that the exhibition is a way for the museum to work with various city groups and agencies, giving New Yorkers tools that will encourage them to think about the city’s past and become active participants in creating its future: A challenge to cherish and to engage.