The New-York Historical Society is the first museum in the U.S. to showcase the history of women on an ongoing basis. 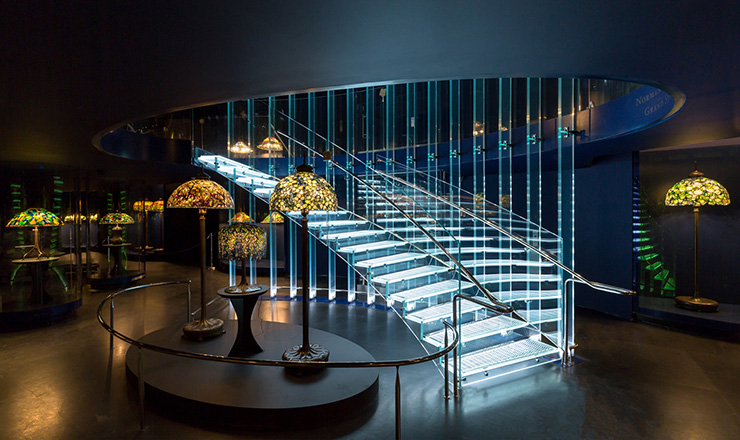 In New York City, there are museums about Native Americans, design, firehouses, even sex. Now, there is the Center for Women’s History—the first museum in the United Sates where “women’s history in the general sense is on the permanent agenda,” according to Louise Mirrer, president and chief executive of the New-York Historical Society, where the center is based.

The center is located on the society’s newly renovated 4,800-square-foot fourth floor, which celebrates its opening on April 29th. In addition to the Center for Women’s History is the brilliant Gallery of Tiffany Lamps, featuring the society’s encyclopedic collection, and a display of the artifacts and artworks from New-York Historical’s extensive collection, including mementoes recently donated by Billie Jean King.

Inspiration for the center came a decade ago, when curators, preparing for a Tiffany lamp exhibition, were amazed to discover that many of the designs credited to Louis Comfort Tiffany had in fact been created by Clara Driscoll and her “Tiffany Girls,” artisans who cut glass and pieced together the leaded lamp, says Margaret Hofer, vice president and museum director, says that letters from Driscoll, discovered by the curators, brought the talented woman’s creations out of the shadows. In them, Driscoll described the process of inventing many of the most prized “Tiffany” designs: the Dragonfly shades, the Wisteria table lamp (1901) and the rare Cobweb shade on a Narcissus mosaic base–designs that, unlike Tiffany’s own geometric works, were based on nature. Bear in mind, Hofer underscored, this was two decades before the 19th Amendment, giving women the vote.

In the darkened exhibition space, the hundred gleaming lamps seem to float in space. With its vaulted ceiling, sand-blasted glass stairway, and black/blue floor and walls, the gallery is truly a “a blue jewelry box,” noted Georgina Papathanasiou, project lead for Eva Jiricná Architects. The Tiffany exhibit, like others in the museum, is interactive: visitors can, like the Tiffany Girls, design their own dragonfly lamp, selecting glass pieces and seeing the results on a three dimensional model. At kiosks, they may listen to actress and “Bond Girl” Lois Chiles as she reads Clara Driscoll’s letters.

Valerie Paley, chief historian of the society and director of the Center for Women’s History, checked off four goals: To disrupt the conventional narrative of American history, which focuses almost solely on men; to understand women’s contributions to history, in the city and the nation; to draw on the Society’s collection for insights into the past and present; and to present discussions and panels related to women’s histories. 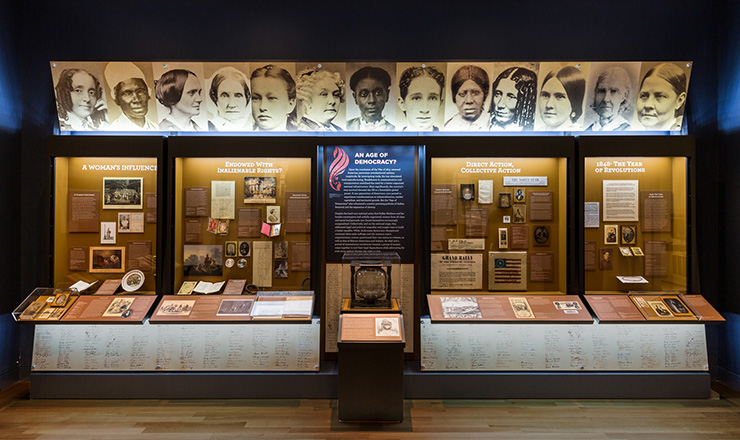 The exhibition illustrates the new Center’s mission: to reveal the often-overlooked stories of women who shaped American history.
. . . . . . . . . . . .

The first exhibition in the 1,500-square foot Joyce B. Cowin Women’s History Gallery meets all four. “Saving Washington,” which opened in March in celebration of Women’s History month and runs through July, “animates history, with an eye toward showing how women helped build the new nation,” with a focus on Dolley Madison. Perhaps best known for saving the portrait of the first U.S. president when the British torched the executive mansion during the War of 1812, Dolley, along with other women of the time, was instrumental in bringing together disparate factions of the new democracy—despite the fact that they, as women, were not citizens. (In fact, said Paley who curated the exhibit, it fell to Dolley to save precious the painting and other precious items; although President Madison and his cabinet left the capitol as the British approached, the First Lady courageously stayed behind, leaving only when enemy troops entered the city.) 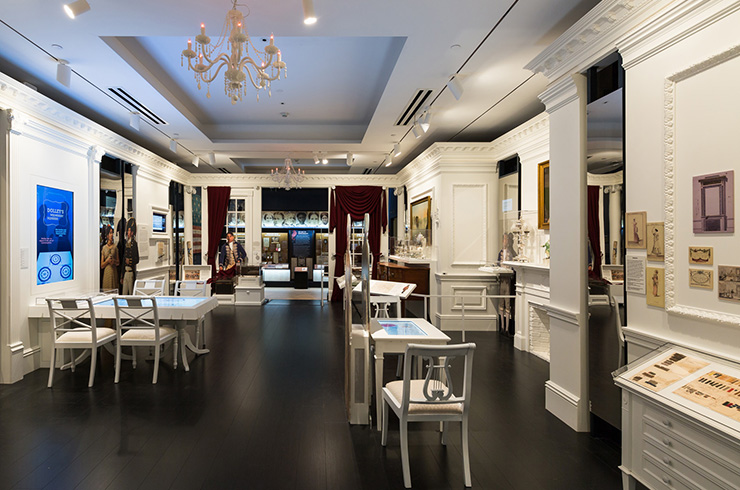 Entering the exhibition—“the man cave” as Paley describes it—most of the images are of men and their implements (a pair of dueling pistols); these are the traditional, accepted figures in history. But soon narrative shifts, as does the focus of the exhibition, highlighting the behind-the-scenes efforts of women to strengthen the new democracy. Dolley, a celebrated hostess, threw “Wednesday Night Squeezes,” popular gatherings where citizens from all walks of life mingled, so crowded, suggested Paley, that people had to talk with each other, regardless of their class or politics. Among the items on display is a portrait of the First Lady in her party turban complete with feathers, which Dolley wore “so that every guest would know who and where she was” and so they might speak with her, no matter how crowded the room! Modern-day guests can partake of the evening’s joviality, by sitting at the men’s gaming table and select virtual ways to “discuss” the topics of the new nation—typically in a winner-take-all manner. Meanwhile, seated at the women’s dining table, visitors can engage in more sociable conversations, gaining advantage by collegiality, empathy and, yes, flattery. (Sound familiar?) 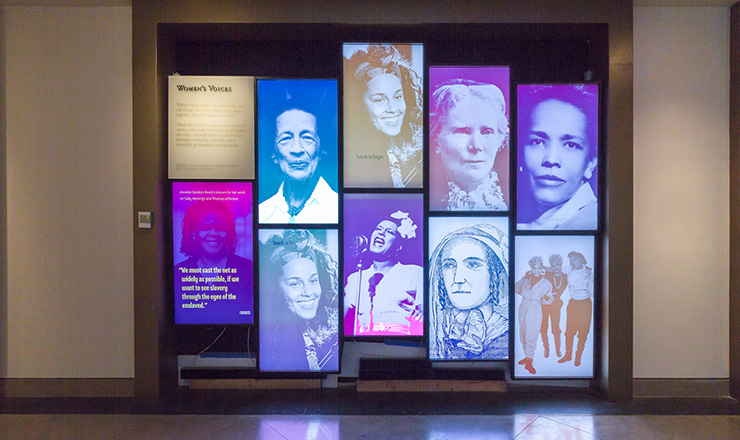 “Women’s Voices,” a multimedia digital installation of nine oversized touchscreens, reveals the hidden connections among exceptional and unknown women who left their mark on New York and the nation.
. . . . . . . . . . . .

In the mid-nineteenth century, women started taking more overtly political stances, as exhibited by medals and petitions from abolitionist societies, which included Susan B. Anthony and Elizabeth Cady Stanton, and daguerreotypes of the women who, in 1848, held a convention in Seneca Falls, N.Y., the first ever to address “the social, civil and religious conditions and rights of women.”

The folks at the New-York Historical Society admit that, in the months leading up to the 2016 Presidential election, they thought that the opening of the exhibition and the first museum-based Center for Women’s History would track with another first: the inauguration of the first woman president of the United States, who just happened to be a former New York Senator. History didn’t oblige. Yet, in some ways, they suggest, the outcome of the November election makes the center and its program all that much more important and vital.