From New York to DC to the World 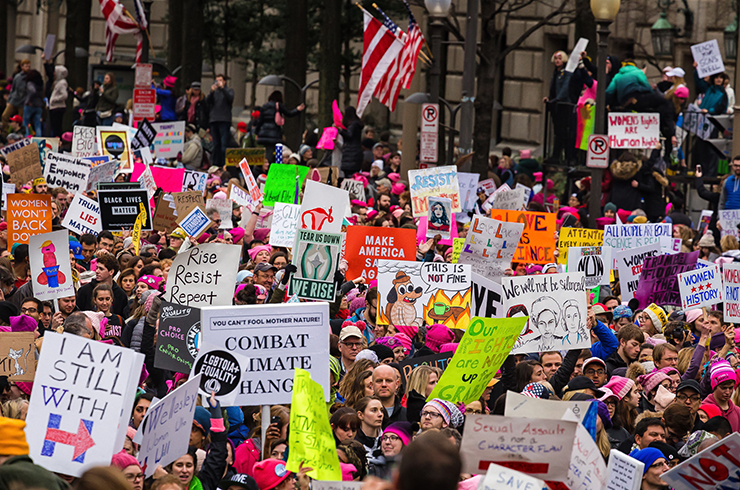 Photo by Mobilus In Mobili/Flickr

The C train pulls into the stop on 103 Street and stops at 3.50 a.m. on Saturday. Doors open, some men are sleeping on the seats. Mid-car a group of women wave when they see me with my pink hat; several women pull out theirs.

We are all heading to buses bound for DC and the Women’s March. In fact, 412 buses from New York State were chartered by various groups to drive to the DC gathering, among them the David Zwirner Gallery  (“friends, family, colleagues, artists, collectors”) and Robert De Niro’s makeup artists. I would be journeying one of twelve buses hired by NOW-NYC, the local chapter of National Organization for Women. 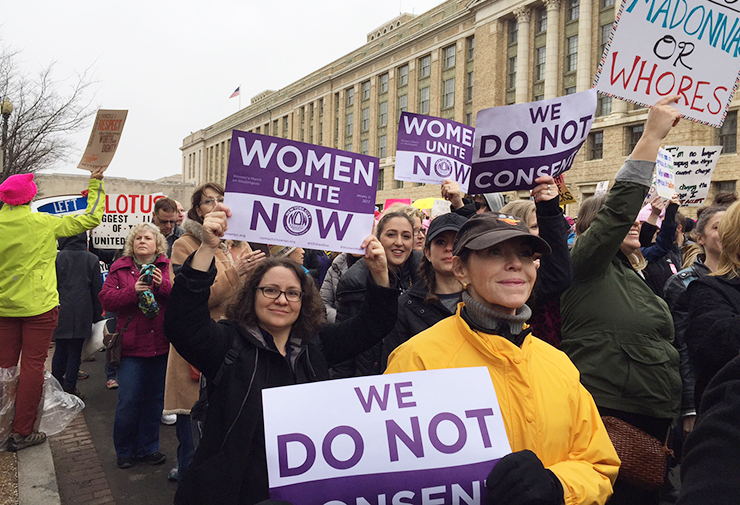 But why head to DC when there was an important march in NYC? One traveler said she signed up immediately, as soon as she heard of the plans. Another said she “wanted to be seen and be heard—by Trump, if possible.” Friends expressed similar thoughts: Jonathan Diamond, a producer, said he had to be there, boots on the ground: “I haven’t done enough in the past. This is the wake-up call.” Another: “I wouldn’t miss it for the world.”

In fact, the world didn’t miss it, with more than 600 marches taking place around the globe, from Singapore to Cape Town, Bali to London, Antarctica to Australia (friends were sending emails from all these areas, with the exception of Antarctica.)

The totals are astronomical: Jeremy Pressman, a professor at the University of Connecticut, and Erica Chenoweth, a professor at the University of Denver, collected the data and put it on a spread sheet, “in the public interest,” they explained, and not as part of a research project. Current estimate of marchers in the US: a low of 3,202,525 and a high of 4,691,515. Their international count—from 270,761 to 314, 623—they noted was partial. (I can attest to that—a friend in Bali led a group and it hasn’t been included). They’re still counting, if you want to see:  Women’s March Crowd Estimates.

We Are All Americans

The largest gathering was in Washington, DC,  (470,000 to one million), where buses swarmed to pre-arranged parking sites. When we arrived at our site at Howard University, the Metro was so backed up that the trains weren’t moving at all—which didn’t turn out to be all that bad. The close-to-three-mile walk was a pre-march parade: SEIU members jovially shouted out chants to the beats of a drum as women and men pushed strollers with signs “For Our Children.” A long line formed outside a pastry shop with a poster: Coffee, Pastry & Protest. 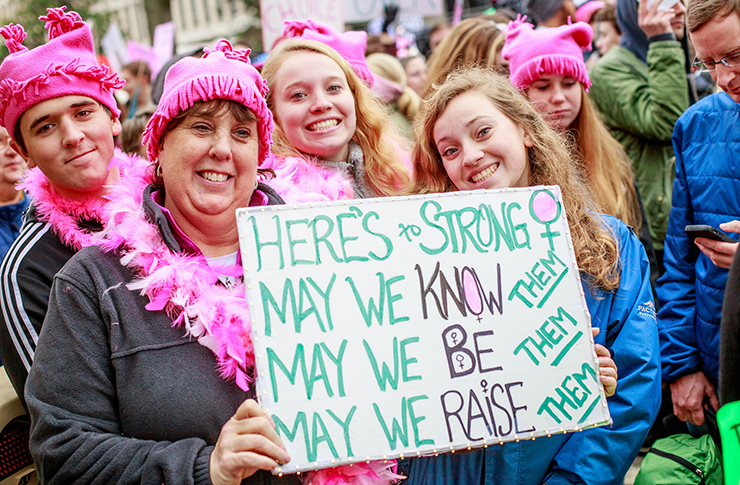 By the time we arrived close to the starting point, the Mall and all the streets around it were a tsunami of pink pussy hats. (Piper Mercier, my seven-year-old friend who was taken on her first march by her mother Jody, later corrected me and said she wasn’t wearing a pussy hat: “It’s a monster hat!”)  My hat was knit by Patricia Larkin, an author of children’s books, who joined over twenty other knitters—from grade-school girls to grandmothers at Knitty City on the West Side—knitting and crocheting thousands of hats to wear at the marches. A card on my hat stated her issues: “All rights—voting, freedom of choice and human rights.”)

Somewhere at the top of the Mall, politicians and stars were speaking, many of them from New York City: Bob Bland, the Brooklyn designer who co-founded the march, Gloria Steinem, and, most notoriously, Madonna. Most of us could neither see nor hear the speakers; instead we were content to stand and, when we were lucky, flow through the crowd in little streamlets—joyous, energized, civil and united. Never have I been in a large crowd—including the opera at Lincoln Center—that was so polite, courteous and trouble-free. Not one arrest was made during the march! 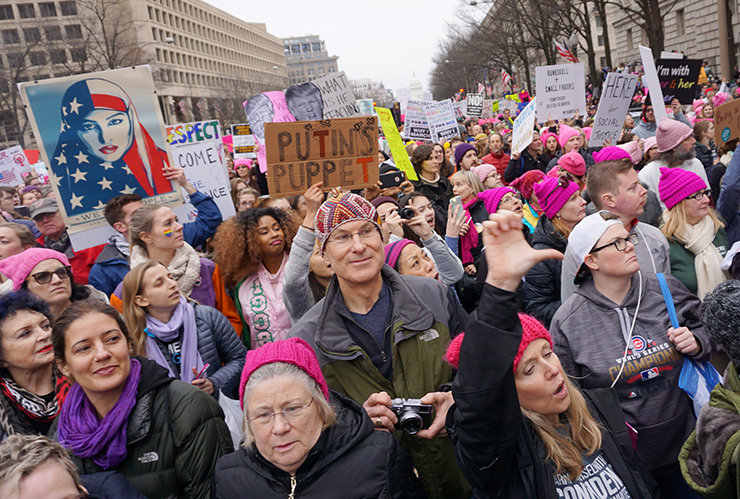 Eventually we realized we’d never get to the front of the mall so the crowd divided on its own into five marches—one the main route, two down the mall and two on parallel avenues. Among us, and sited by my bus mates, were Senator Cory Booker wearing a pink scarf and Tea Lioni of Madam Secretary. I’m also pretty certain I saw woman whose photo was the basis for Shepard Fairey’s, “We the People” poster of a Muslim-American in a stars-and-stripes hijab—one of the march’s favorites. (NB: The 32-year-old New Yorker, Munira Ahmed, wasn’t wearing one, nor, according to a post, does she!)

The crowd was as diverse as our nation: signs and outfits symbolized the issues people cared about, chief among them women’s rights. One white-haired woman had a sign attached to her walker: “Now You’ve Pissed Off Grandma!” Midpoint on the Mall, Karen Carlson, from Madison, Wisconsin, wore a suffragette-like sash with dozens of buttons bearing names carefully penned on them: “I just finished,” the 80-something woman said, explaining that the buttons on her sash bore the names of friends who would have gone to Washington, had they been strong enough. “They’re here in spirit,” she said. Indeed: One friend gave her frequent-flyer miles so she could get a direct flight; another gave her Christmas money to pay for her stay. The march started well before Karen’s plane arrived in DC and when the captain asked over intercom how many passengers were headed to the march, “The whole plane waved their hands and called ‘Yay!’” As if in tribute, a group of young women behind Karen started to sing and dance to “Dancing Queen.” 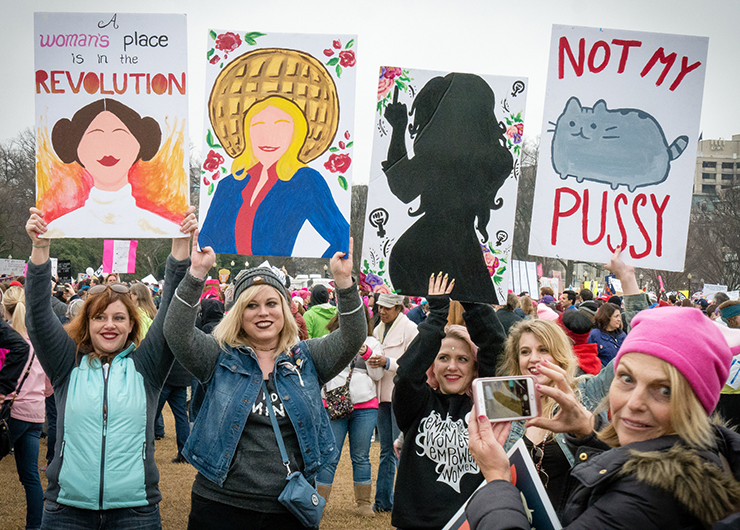 At the march all generations and genders were present: Perched on her father’s shoulders, a little girl carrying another Shepard Fairy poster led marchers in cheers that reverberated in waves throughout the crowd: “Black lives matter!” Women from California held a banner honoring their children at home; throughout the day, other kids stopped by to sign their name and hometown. A brother and sister giggled and pointed, waving their poster: “Fight Like a Girl.”

Stereotypes were forgotten or, better, made fun of: A good number of men wore pink hats. One man with a very big smile and a very pink hat pumped a sign: “Not in My Locker Room!” Another, “If I had a uterus, it would be none of your business.” (The posters were so smart and clever that the New York Historical Society and the Smithsonian Museum are in the process of forming collections.) Signs came in many languages. I counted eight:  Spanish, French, Italian, Russian, Chinese, Japanese, and Arabic. (The sign in Arabic was also translated into English, reading: *Translation, so you’re not afraid: We’re all Americans)

Eventually, we wended our way back to the bus. Over a glass of wine (a pussy-hatted oenophile selected the bottle for us at a local wine shop), Sonia Ossorio, the president of NOW-NYC, said that she believed the march was “an antidote to the grief we’ve been feeling since the election. We’ve turned that corner today—so many people came out in support of our democracy.” 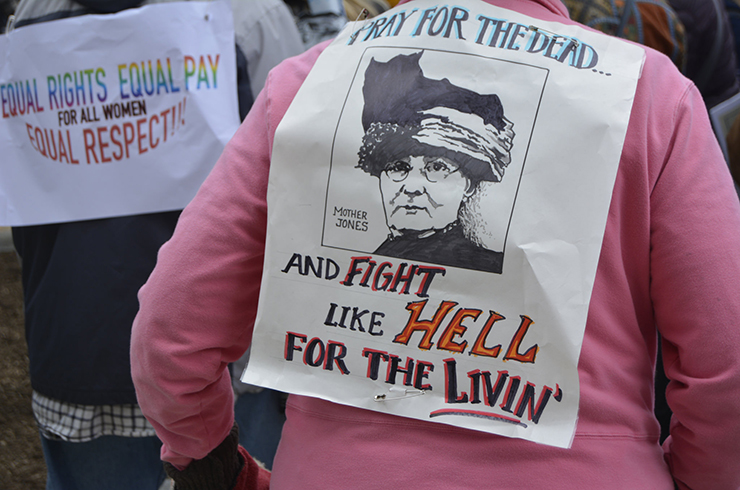 Since the election, she said, NOW-NYC has had a 50 percent increase in membership. And over 600 men and women joined the buses. A number of them voted for Trump—but they’re not supporting his anti-immigration, anti-women, anti-LGBTQ statements. “This movement is the opposite of Trump’s vision—‘Make America Great Again’ equals ‘Make it white and patriarchal.’ This movement is about love and care and compassion and a perception of America that is inclusive.”

“The next step,” said Ossario, “is to put all the enthusiasm into action on many fronts,” including standing up for the first amendment and supporting the press, which “is on the frontline, our democracy’s watch-dog.” Also on the agenda: a fight against budget cuts to programs that benefit women and their families. “We need to get more people voting—and support them in their right to vote.”

To achieve this, NOW-NYC is planning a number of networking events and activist nights (the next coming up is Feb. 7), in which plans will be made for actions on the national, state and local level. Visit NOW-NYC for details.

Jean Bucaria, NOW-NYC’s deputy director, said that “Fight Back Now” teams will help people take action on issues demanding attention in their districts. In response to the well-publicized comment by the NYPD 94th precinct captain that “acquaintance” rapes are not as important as “stranger” rapes, NOW has helped people in Greenpoint organize a meeting with the police commissioner. At the state level, NOW is pushing for legislation protecting the Reproductive Health Act and the Comprehensive Coverage Act, in case Washington tries to cut important services. Perhaps most important, NOW is pushing Albany to codify Roe v. Wade into state law. “If we can’t bring pressure now, I can’t imagine when.”

NOW is already working with its members to prepare for the 2018 and 2020 elections. “We have to start now,” said Bucaria. “It’s all about civic engagement.”