Judith Enck, a former EPA Regional Administrator, warns: If Trump gets his way, the Bronx won’t get funding to deal with lead poisoning, Manhattan and the outer boroughs will struggle with sea level rise, and smog will choke the city. 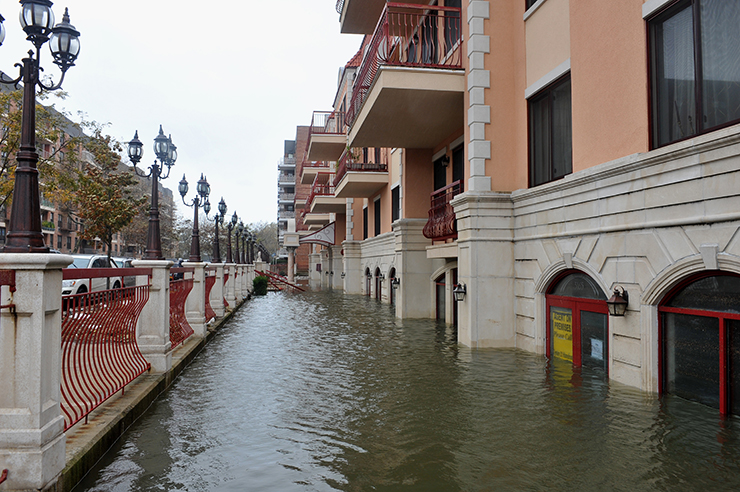 These days, New Yorker Judith Enck is busy on the talk circuit. Why? Enck was administrator of Region Two of the Environmental Protection Agency (EPA) for seven years, until she—like other Obama appointees—was asked to hand in her resignation. Her topic: the state of the environment and the future of the EPA under the Trump Administration. At the talks she always hands out lollipops. “I know in public speaking you’re not supposed to depress people,” she explains. “Lollipops are the only sweet thing I can offer.”

“When it comes to the environment, I cannot point to one positive accomplishment,” Enck told the New York State Bar Association. Ninety-seven percent of scientists agree that carbon pollution is caused by human actions. “But Scott Pruitt, the astonishing EPA Administrator, is not convinced. He filed 14 lawsuits against the EPA as Oklahoma’s Attorney General.” Trump, she added, called climate change “a hoax.”

At a recent talk in Manhattan, Enck minced no words about Pruitt. During his confirmation hearing, Pruitt was asked if he could name an EPA regulation he supported. “He could not name one,” said Enck. “Quite simply he is the worst administrator in the 47-year history of the EPA. He is quickly getting stuff done. Lots of bad stuff.”

The list of what Trump and Pruitt have done since the inauguration is long and getting longer. “We don’t have time to waste when it comes to climate change. This year is the second hottest on record.” And yet, under Pruitt, all references to climate change have been erased from the EPA website, and EPA officials have been warned not to use the term. And on October 9, Pruitt told coal miners he will repeal Obama’s Clean Power Plan, making headlines across the nation. New York  Attorney General Eric Schneiderman immediately shot back: “If the Trump administration finalizes this repeal, I will sue to protect New Yorkers and put a stop to Trump’s irresponsible and illegal efforts to turn back the clock on public health.” 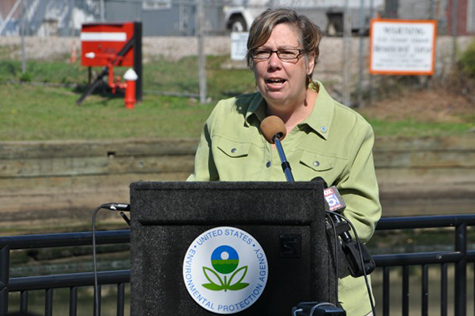 Enck, who was at the EPA when Hurricane Sandy struck New York and New Jersey (which are part of EPA Region Two), notes that during the current disastrous hurricane season, many regional directors have yet to be appointed. “The EPA plays a central role and not having the positions of key leaders is going to be a problem,” she points out. In fact, the very week that Hurricane Irma was wreaking havoc in Florida, Pruitt announced that he was cutting close to 500 jobs at the EPA and boasted about his buyouts of top–level staff. When asked about climate change as Texas and Florida were dealing with the devastation from Harvey and Irma, Pruitt complained that the question “was insensitive.”

Insensitive? If Trump’s budget is passed, funds for the Tampa Bay estuary program will be cut by 90 percent. Controls on the oil and gas industry have already been loosened. The news is no better for New York. “Trump’s environmental policies would be devastating for New York City, particularly in regards to climate change,” warns Enck.

If Trump is successful in pursuing his policies—including his executive order to roll back the Clean Power Plan and his plan to cut fuel efficiency standards for cars—carbon pollution will continue unabated. Higher concentrations of carbon will lead to higher sea levels and New York, like the rest of the nation, will see changes in weather patterns, more flooding, and extreme weather. As for the future: The Economist noted that there are now 400 extreme weather events every year, four times as many as in 1970. The havoc caused by this hurricane season is just a taste of what may come.

Enck points to a recent analysis that suggests if “Trump’s policies are actually put in place…[they] could lead to an extra half billion tons of greenhouse gases in the environment by 2025—that number is equal to the annual electricity emissions of 60 percent of US homes.

“Air pollution and water pollution do not recognize state boundaries,” she states, as she shows photos of New York City in the years before the Clean Air Act was passed: smog swirls around the George Washington Bridge and black soot billows out of apartment building incinerators.

Currently, the EPA is overseeing work on three Superfund sites in the city: Gowanus, Newtown Creek and Wolff Alport—a radioactive site once home to a thorium factory in Queens. Progress has been made, but there’s still much work to be done. How much work will get done if the White House budget is approved is a big question, thanks to what Enck calls Trump’s “budget Armageddon”: a cut of 31 percent to the overall EPA budget—30 percent for cleanups and half of all EPA’s science work. EPA grants to states would be slashed by 44 percent.

“Work on the Superfund sites and other science-based cleanups would go much slower—if at all.” The budget would eliminate the National Estuary and Geographic Programs, endangering wetlands, and, in extreme weather events, neighboring communities. There would be little oversight of the Clean Water Act, impacting the New York/New Jersey Harbor Estuary Program and Watershed Protection Program of Jamaica Bay.

If Trump gets his way, she warns, “Places like the Bronx will not get funding to deal with lead poisoning. The EPA won’t have the staff to make sure drinking water is fully protected. The island of Manhattan will struggle with sea level rise.”

Unless Congress stands up—and the citizens push their representatives— the proposed budget “will not only make it harder for millions of people to receive good health care, but it will actually make them sick.”

Help Save the EPA: Friends of the Earth is a great source of petitions, workshops and tool kits for people who want to stand up to Trump’s attack on the environment.

WHAT CAN WE DO?

“We cannot slide back,” urges Encke. “Too much is at stake.” She offers ten steps to take:

Regularly contact your members of Congress about specific legislation: Senator Schumer, Senator Gillibrand and your House member. (See foodandwaterwatch.org). Also give your thoughts on the proposed federal budget. Put the phone numbers in your phone. Phone calls are more effective than emails, letters or signing online petitions.

Meet with your representatives when they are in their district offices and tell them two specific actions you want them to take. You might only be able to meet with a staffer, but keep pressing. It’s much easier to meet with House members than U.S. senators, especially if you bring a group of constituents. (Find your Representative)

Vote with your wallet. If you own stock, make your environmental position known to that company. Retired? Look at the list of company stocks in your pension fund. This tactic can work: The day before President Trump pulled the U.S. out of the Paris climate accord, 62 percent of ExxonMobil shareholders voted in favor of a proposal to require the giant oil company to disclose the impact of its business on climate change. This is unprecedented. In 2016, a similar proposal got 38 percent of the shareholders vote. What a difference a year—and persistent action—can make! CERES Investor Network (ceres.org) is a good source of shareholder resolutions.

Support environmental litigation. Environmental organizations like Earthjustice and Natural Resources Defense Council are filing lawsuits as quickly as they can. New York Attorney General Schneiderman is taking a major leadership role in standing up to the Trump Pollution agenda. Every time you read about him filing a good environmental lawsuit, thank him.

Be vocal. Write old-fashioned letters to the editor. Use social media. Twitter can be a force for good. President Trump tweeted 991 times during his first six months. That’s 5.5 tweets per day. You can tweet too! Follow me on twitter: @enckj

Watch Fox News and engage with them. A reporter recently made the case that Trump will only lose influence if Fox News starts to sour on him. Clean air and clean water should not be a partisan issue.

Talk with Trump voters and listen to why they voted for Trump and what they think today. We need to win them over. Sooner or later, (hopefully sooner) Donald Trump is going to leave office, leaving us with a divided country—a country that has lost its civility—and an eroded democracy. “Just like Humpty Dumpty, we have to put it back together again. It starts by engaging with people who are on the other side.”

Mobilize. An ABC News/Washington Post poll found that Americans opposed leaving the Paris Climate Change Accord by a two-to-one margin. The Science March in April and the People’s Climate March in Washington were good starts. And keep to it: Enck recalls a photo of a little girl marching: “Her sign said: ‘I am marching for my grandchild.’ A ten-year-old. Let that sink in.”
. . . . . . . . . . . .