Justice Ginsburg talks about the nation, her past, her future, how she keeps fit—and how you can benefit from her routine. 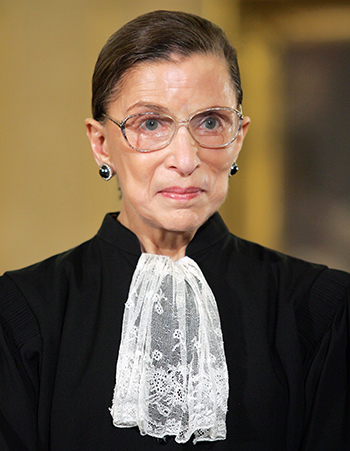 In October, President Donald Trump bragged to insiders that he expects to appoint three justices to the Supreme Court, in addition to Justice Neil Gorsuch, who was appointed 14 months following Justice Scalia’s death, after Republicans blocked President Obama’s nominee. By the end of his first term in office Trump boasts, he’ll replace Anthony Kennedy; (Trump claims “he’ll retire,” Kennedy says he has no such plans); Sonya Sotomayor (who has “diabetes”—which is well controlled) and Ruth Bader Ginsburg (“What does she weigh?” Trump asked: “Sixty pounds?”)

Ruth Bader Ginsburg—4’9″ tall and 100 pounds—put the kibosh on Trump’s wishful thinking: “As long as I can do the job full steam, I will do it,” she told the U.S. Court of Appeals Seventh Circuit Judge Ann Williams in front of a sold-out audience in Chicago. She repeated her intention again at Georgetown Law School and a public interest law meeting in Washington, D.C., and in New York City at the popular 92nd Street Y in a conversation with Charlie Rose.

The 84-year-old Judge added with pride that she used to promise she’d stay on the court for at least 23 years, as long as Justice Brandeis, who was appointed when he was 60. “Well, now I’ve passed Brandeis, I’ve passed (Justice Felix) Frankfurter.” (But she still has to catch up with Justice John Paul Stevens, who retired at age 90.)

Her audience breathed a collective sigh of relief. For them, and many others across the nation, Justice Ruth Bader Ginsburg is an inspiration: She was the first tenured woman professor to teach at Columbia Law School. She co-authored the first law casebook on sex discrimination. She co-founded the Women’s Rights Project of the American Civil Liberties Union and she served as the ACLU’s general counsel, arguing six gender discrimination cases before the Supreme Court and winning five. In 1980, President Jimmy Carter appointed her to the U.S. Court of Appeals. Thirteen years later, Bill Clinton appointed her to the Supreme Court. (And as the second female justice, she was given a t-shirt that read: “I’m Ruth, Not Sandra.” Sandra Day O’Connor’s t-shirt read “I’m Sandra, Not Ruth.”)

Justice Ginsburg relishes her many nicknames: “Rapid Ruth,” for her speed writing opinions. She recently upheld that moniker, writing Supreme Court’s first opinion of the new term less than a month after the case was heard. (She would only make one prediction about the term: “It will be momentous.”) And it has been momentous, as is clear by the argument just made before the Supreme Court in the blockbuster “Masterpiece Cakeshop” case (transcript of Masterpiece Cakeshop v. Colorado Civil Rights Commission). At Georgetown University, when asked why she built her career around advocating for gender equality, she quipped, “You mean, how did I decide to become a ‘Flaming Feminist Litigator’”?

At the 92nd Street Y in New York City Charlie Rose asked how she felt about “Notorious RBG,” originally a blog created in 2013 by a law student riffing on the rapper The Notorious B.I.G. She looked down at her gloved hands, smiled and said: “I’ve heard of The Notorious B.I.G. and it seems altogether natural, because we have one very important thing in common…We were both born and bred in Brooklyn.”

Speaking deliberately and firmly, she outlined important cases and recalled stories of family, friends and colleagues She credited her late husband, Marty, for her success, noting that to have a satisfying work and family life, it’s “essential to have a partner who thinks your work is as important as his” and credited her personal trainer for keeping her healthy. Asked earlier this year to name the “most important person” in her life, she replied “my personal trainer.” (See “WORKING OUT WITH RGB” below, for more specifics.)

Ginsburg went to Harvard Law School, one of nine women in a class of 500. After moving to New York, where her husband was working, in 1959, she graduated top in her class from Columbia Law. Nonetheless she received no job offers. There was no Title 7, prohibiting employers from discriminating on the basis of sex, race, religion or national origin, and the interview sign-up sheets in law firms stated “men only.” However, when Charlie Rose suggested that Ginsburg was “the Thurgood Marshall of feminism,” she immediately corrected him. “We copied Thurgood Marshall’s techniques in making building blocks,” she said, by not asking the Supreme Court to make a giant step, but going “step by step” in getting rid of discriminatory statutes. “That was his technique and it was a winning one.”

There was, however, an enormous difference between the two litigators: “When Thurgood Marshall came to a southern town to defend someone, he didn’t know if he’d be alive at the end of the day,” she explained. As a white, she never faced that risk.

In the years since, laws discriminating against women because of their sex have, one-by-one, been overruled. Now, the problem is, she said, “unconscious bias” that leads to discrimination against women. By way of example, she recalled that one day on the bench she inadvertently interrupted Justice Sandra Day O’Connor. “I thought that she had finished, so I asked a question,” Ginsburg said. “Justice O’Connor quipped: ‘Just a minute, I’m not finished.’”

Ginsburg apologized to O’Connor, who told her not to worry: “The guys do it to each other all the time.” But the small interaction was fodder for the press. USA Today ran a headline: “Rude Ruth Interrupts Sandra.” Later, when a reporter confronted her about the incident, Ginsburg asked if he had noticed her male colleagues interrupting each other. “He watched for a month,” Ginsburg said. “Then he came to my chambers and said, ‘You know, you’re right. They do interrupt each other all the time, but I never noticed it.’”

When asked when will there be “enough” women on the Supreme Court, Ginsburg took a sly swipe at gender bias: “I say, when there are nine….There’ve been nine men and there’s never been a question about that.” And when will we see a woman as president? “Well we came pretty close,” Ginsburg replied. Did she think sexism played a role in Hillary Clinton’s defeat? “I have no doubt that it did. …It was a major factor.”

She added, however, that she is optimistic about the prospects for gender equality in government: When she began her tenure as a justice in 1993, “there were just half a dozen women in the Senate. Today there are 21…to see the entrance of women into places where they were not there before is a hopeful sign.”

WORKING OUT WITH RGB

To satisfy the curiosity of Ginsburg’s followers about the workout—and inspire others to follow her lead—Johnson recently wrote The RGB Workout: How She Stays Strong…and You Can Too!

The illustrated book is inspiring (if sweat provoking) as Johnson takes you through the full cycle of Ginsburg’s workout—warm-ups, crunches, lunges, weights, pushups and planks. When Charlie Rose asked her what type of pushups she performed, she gave him a withering stare. She does full body pushups, supported only by her hands and toes, not the so-called “girl pushups” from the knees. She also does planks, standard and side, each for 30 seconds. And presses 70 pounds.

“I am often consumed by the heavy lifting supreme court judging entails, but reluctant to cease work until I am sure I’ve got it right,” Ginsburg writes in the book’s foreword. “But when time comes to meet Bryant, I leave and join him at the gym for justices. The hour-long routine he has developed suits me to a T.”

They meet in the evenings, usually with the TV tuned to the PBS News Hour. Ginsburg often sports a sweatshirt emblazoned with “Super Diva,” a reference to the world of opera that she also adores. (For years, Johnson urged Ginsburg to sleep more, but once, during a workout, a segment on PBS about Benjamin Franklin “mentioned that he slept only four hours a night. We just exchanged looks…the suggestion that she should get more sleep was stricken from the record.”) After the workout, Justice Ginsburg usually goes back to her chambers. “I can be exhausted” she writes, “but after the workout, I come back feeling refreshed.”

When a young reporter from Politico first heard about the workout, he doubted the seriousness of the challenge: “I thought it would be patty cake.”

Appeared in Politico: I Did Ruth Bader Ginsburg’s Workout. It Nearly Broke Me.

But when Johnson told Ginsburg about the reporter’s upcoming visit, she said, “I hope he makes it through!” It took the 20-something reporter 1½ hours to complete Ginsberg’s hour-long routine; during the workout, he found that Justice Ginsburg was much more flexible than he was, able to easily grasp her ankles. Summing up his experience, he wrote: “Sore, disoriented and cranky, I didn’t feel a day over 65.”