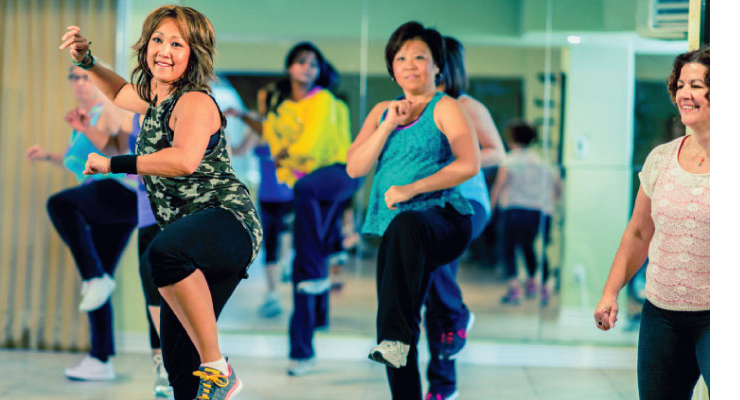 Two years ago, I found myself at a standstill, literally. After running almost every morning for 35 years, a freak accident tore a crucial ligament in one knee, making running impossible. Then a fall resulted in a spinal fracture, making outdoor cycling inadvisable.

As I was looking for a new exercise routine, my friend Christine Forkner, 74, told me about Zumba®. “It’s a kind of aerobics,” she said. “But I call it ‘The Dance Divine.’ I can be playful, I don’t have to keep up with a partner, I just watch the instructor, and I move to the rhythm and I skip whatever moves aren’t for me.”

I decided to try it for myself when I saw that the New York Sports Club I belonged to held Zumba classes. Francesco Locatelli, the instructor in my first class, was a tall, muscular young man, and almost everyone there looked a lot younger than I was. My first thought was ‘Uh oh. Will I be able to keep up?’ But two years later I’m still at it, and keeping up after my own fashion.

Francesco told us to watch his steps and his hand cues and try to follow. “If you get lost, just move with the rhythm,” he said. There’s always a lot of rhythm. Depending on each instructor’s preferences, Zumba can be set to Latin dances like merengue, salsa, cumbia, reggaeton, any other high-energy pop, or even hip-hop music.

A typical routine might include moving two steps to the left, then stepping back two steps to the right, adding clapping, with our arms held up to work the biceps. There are pivots, shoulder shrugs, and twirls. It is an aerobic workout, but the main difference is the feeling of celebration. Now I’m hooked and go to one-hour Zumba classes two or three times a week. Like other Zumba enthusiasts, I agree with Caroline Kohles, Senior Director of the Center for Health and Wellness at the Marlene Meyerson JCC Manhattan, who says, “It’s not a work-out, it’s a party.” But when I realize how much energy I’m expending, I realize that it is a workout.

Zumba started by accident and is now a worldwide phenomenon

Zumba® (the name is a registered trademark) started by accident in the 1990s when Colombian dancer, choreographer, and aerobics instructor Alberto (Beto) Pérez forgot his teaching notes one day. For a quick save, he pulled out some Latin discs. The class loved it and word of mouth spread. His classes grew and led to what is now a multimillion-dollar business. Francesco earned his instructor’s certificate in Milan, Italy and then carried his expertise to this country, illustrating the international aspect of the Zumba phenomenon. Fifteen million people now do Zumba in 200,000 locations in 180 countries.

There are all levels of Zumba classes, from Zumbini (for ages 0 to 3), to Zumba Toning (with light weights), to Zumba Gold, a low-impact version for older people. There’s also an annual cruise, with classes given by 50 instructors, including Beto Pérez himself; the next one will take place March 24-29, 2019, sailing and dancing in the Caribbean out of Miami.

Francesco says Zumba is popular because it’s “unique, fun, challenging—and sexy. The most important thing is that you enjoy yourself. The more you let yourself go, the more you’ll meet your goals.” He says, “I consider a class successful when everybody’s happy, smiling, sweating, and having a good time.” As a certified instructor, Francesco receives new CDs on a regular basis, and he likes to vary his playlist, using his own choreography. We follow his steps and his cues, with everyone doing the best she can. (Men also do Zumba, but our classes are overwhelmingly female.)

New York Times essayist Henry Alford became so carried away by what he calls “the Z,” which he took up in his fifties, that he ended up going deeper and deeper into dance—and then writing the newly published And Then We Danced: A Voyage into the Groove, a hilarious book about his various terpsichorean adventures.

It’s easy to find a Zumba class near you

Community centers, gyms, and private classes all over New York City and the metropolitan area offer Zumba, including the 92nd Street Y, Equinox, Chelsea Piers, Fred Astaire, Marlene Meyerson JCC, and the gamut of dance and exercise venues, including individual teachers. To find a class for yourself, put “Zumba” and your zip code into your computer and you’ll find an abundance of classes, and most likely at least one within a short walk. (I found at least five within a five minutes’ walk of my apartment on the upper west side.)

Says Caroline Kohles of the Marlene Meyerson JCC Manhattan, “We’re an all-access club, with members from ages 14 to 100, so we offer programs for all ages.” The JCC offers regular Zumba and Zumba Gold, and hires only certified instructors who have from six to ten years’ experience.

Many people take up Zumba to lose weight—which is a good reason. A study at the University of Wisconsin found that Zumba regulars tended to burn about 370 calories in a 40-minute class, making it a workout similar to moderately intense exercises like step aerobics. In a Texas study, obese women with type 2 diabetes lost an average of 2.5 pounds after doing Zumba three times a week for 16 weeks. And after the study ended most of the women kept going.

If you have never Zumba’d before

What do you need to know if you have never done Zumba before? All the instructors I talked to emphasize the importance of letting the teacher know you’re new. (Most ask the class how many are new to Zumba.) Then you need to watch the instructor, see what she or he does, and follow along. The movements are simple dance moves focusing mostly on swaying hips and steps going every which way. There’s no formal teaching in a typical Zumba class: the teacher does very little talking, but rather cues the class with arm and hand movements. If, say, Francesco picks up one foot and then the other, you do it too. The same for moving left to right, raising your arms, waving your hands, sashaying with your rear, and so forth. But throughout, listen to your body, do just what you feel comfortable with, and stay with the program only as long as you feel secure.

Follow the beat, but STOP if you feel joint pain, if you get out of breath, or if anything else bothers you. And don’t try to keep up with anyone else. At 85 I’m clearly the oldest person in my class, so I do what I can, and I follow the advice of Maria Assis, who teaches Afro-Brazilian Zumba at several neighborhood centers around town, “You just have to let yourself go with the music.”

One question newbies have is what clothes, especially what shoes, to wear. Clothes are whatever work-out garb you like—and shoes vary. Most of my Zumba classmates wear lightweight sneakers. The running shoes I had didn’t work for me, since running shoes are made to run—to go forward, not to turn, and Zumba involves pivoting and turning side to side. Francesco likes a sturdy sneaker since he jumps a lot, but few of us in the class keep up with his leaps and bounds. For me the Le Coq Sportifs I had bought online work perfectly. The JCC’s Caroline Kohles recommended going to JackRabbit or Capezio for advice on buying shoes. At Capezio the E-series Jazz Oxford and slip-ons that I saw ranged from $34 (on sale) to $69, and at Jack Rabbit the Nike Netcon Dsk Flynit2 and New Balance FuelCore Agility Training ranged from $100 to $150. Since everyone’s body and feet are different, I would recommend starting with whatever shoes you already have and then seeing how you feel and how you move.

One of the biggest plusses of Zumba-ing in the morning is that the music stays with me, popping into my head any time of day or night in the form of earworms that leave me eagerly awaiting the next class.