Saving Your Marriage After an Affair

What some therapists say about saving a marriage unhinged by infidelity. 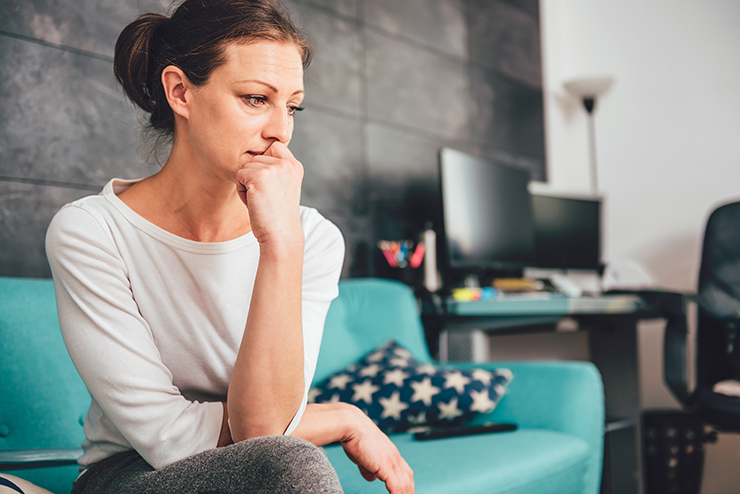 When people hear about a marriage breaking up, often the first question is “Was he fooling around?” Or “Did she cheat?” But when people hear about a married couple restating their wedding vows, they rarely ask those same questions. According to psychotherapist Esther Perel, if they did they might get some surprising answers. She impresses upon a couple dealing with the after-effects of infidelity that this experience, as unsettling and even devastating as it usually is, may be a blessing in disguise that can energize their marriage, not derail it.

In a 2013 Gallup poll Americans rated adultery as the worst thing that can happen in a marriage—worse than domestic violence, of gambling away the family savings, and even of incest. Many believe that a dalliance should automatically end the union. Hillary Clinton, for example, was broadly criticized because she didn’t leave Bill after his involvements with other women were trumpeted on the public stage. Her critics saw this as a blot on her character rather than a sign she was prioritizing their strengths together over his personal weakness.

So where does Esther Perel’s contrary view come from? One reason, she says, is because of her international background, which has helped her form a view that goes against popular sentiment in the United States. Born in Belgium, then living in Israel, fluent in nine languages, she is truly multicultural. And she continues to be international as she counsels both heterosexual and homosexual couples around the world. 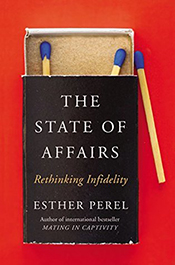 It’s not often that psychotherapists rise to rock-star popularity, but that’s what this 60-year-old dynamite-looking woman has achieved during these last few years, as she has talked about sex and written about sex in TED talks, podcasts, and her two books. Her first, Mating in Captivity: Unlocking Erotic Intelligence, an international best-seller, has been translated into 26 languages, and in her new one, The State of Affairs: Rethinking Infidelity, she has made her most provocative statement yet—that dealing with the aftermath of an affair can sometimes save a relationship. The affair is the force that sweeps through and forces a couple to rethink their complacency. However, even though she compares an affair’s effect on a marriage with a life-changing experience that comes with terminal illness, she says, “I would no more recommend having an affair than I would recommend getting cancer.” 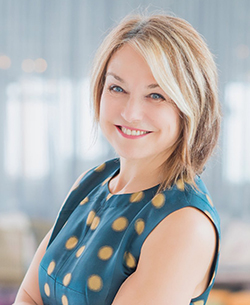 Ms. Perel (left, photo by Karen Harms) gives off an aura of sexuality about herself—but will not say whether she has ever dealt with extramarital sex in her own thirty-year marriage, to another psychotherapist. After all, some things still need to remain private. She has responded to questions about her own marriage with statements like, “My professional life is about helping other people think about their lives, not about imitating mine. When my children come to live events, they have no interest in listening to me talk about my intimate life with their father, and what I do in my bedroom is something that belongs to my husband and me.”

Although monogamy is held up as America’s standard for couples, it has been acknowledged for centuries, judging by how many people step out on their spouses, that it’s a hard path to travel. As Alexandre Dumas said in the nineteenth century, “The chains of marriage are so heavy that it takes two to bear them, and sometimes three.” These days they’re even weightier, for one thing because of longevity of both people and marriages. Therapist Marty Klein, PhD, who leads seminars about infidelity for therapists, told me, “In the old days people had the courtesy to die at 35, but now people are living longer and marriages are lasting longer, and long-married couples want both fidelity AND hot, mind-blowing sex. This is a brand-new idea that’s never been tried before.”

Ms. Perel makes the point that extramarital sex can occur for many reasons, none of which necessarily mean that there’s anything wrong with the marriage or with either partner, the strayer or the stayer. She tends to shy away from such words as “cheating, injured party, and betrayed.” Instead, she encourages people to look for the genesis of the affair, how it started, and why.

“Your first marriage is over,” she tells couples who come to her. Then she asks: “Would you now like to create a second one together?” And if the couple is interested in staying together—which most who consult her want to do—she works with them. “The critical issue in whether the ‘second marriage’ will indeed be better is how the couple navigates the present crisis,” says Dr. Klein, author of seven books, including the innovative Sexual Intelligence. This may involve the one acknowledging guilt and remorse for hurting the other, and the other asking, “What did you get from the affair that you couldn’t get from me?” But not inquiring about bedroom specifics like where, when, and what the other couple did together.

Why in fact do happy people in a good marriage become unfaithful? For many reasons. And how do they define the “affair”? Was it a husband’s one-night stand with a colleague on a business trip? Or a many-months-long exchange of letters with an old boyfriend whom the wife encountered at a college reunion? Why did either one occur? Most important, where does the primary couple go from here?

One theme that comes up repeatedly in discussing an amour is self-discovery: the awakening of energy, aliveness, youthfulness, the frisson of risk-taking. Thus some in a triangulated relationship—as much as they love their partners—don’t want to end an affair because they don’t want to lose the part of themselves that it awakened. Ms. Perel helps people to learn a fresh emotional vocabulary—and sometimes to change their committed relationships in ways that bring a spark of novelty, intensity, even titillating thrills to their lives.

Esther Perel uses the affair to help a couple to explore their bond. “This is often the first time they have ever discussed some of the most important issues in their relationship,” she emphasizes. To help them she often asks both partners in a committed couple to discuss questions that reflect the way they relate. Some of the most common questions are reflected in her online intimacy inventory, which poses “10 Questions You Should Be Asking Yourself about Your Sex Life,” such as “When do you feel most free in your relationship? What do you like to experience in sex? Do you want sexual exclusiveness?” and the like.  (The inventory is available from https://estherperel.com/blog.)

Often, Ms. Perel believes, the mate who gets involved with someone else is not looking for something in the new partner, but for something in him- or herself. The woman who was always a “good” girl, a good wife, and a good mother may find it thrilling to act out what she previously might have considered impossible. The man who had always been a caring, responsible husband, father, and son may want to know what he would be like in a parallel universe. Furthermore, that romantic alternate universe is free of leaking toilets, kids’ report cards, intrusive in-laws—a “poetic interlude in a prosaic life.” And an involvement with a new person may provide the sense of validation the wandering partner seeks from someone other than the loyal spouse who has already validated them by staying with them.

Esther Perel sees herself as something of a sleuth as she helps the couple see what lurks below the surface of the iceberg looming in their life. She acknowledges that although an affair can be painful and destabilizing to the marriage, it can at the same time be liberating and empowering—knowing someone else wants you and is excited by you. She asks the straying partner to ponder, “Who are you in the affair?” It’s often an intimate encounter with the self, and introspection can clarify what the payoff is: youthful energy, playfulness, breaking away from rules. After many years partners may feel they know everything about each other and they become restless, or even bored. In a liaison they find a new audience for their story and a new persona they can try on.

She also talks with couples who want what she calls “ethical nonmonogamy,” or an agreement that they can have other partners—under certain conditions. This is often a tricky agreement to maintain but it works for some. In fact, when she asks, “When do you feel most drawn to your partner?” she often hears, “When others are attracted to them.” Polyamory, a lifestyle that involves romance with more than one partner, is a growing movement around the world, says Ms. Perel. Usually people in these unions set certain boundaries on their relationships—like: “no one you know, no one who lives in our city, no falling in love, no one who could threaten our health or way of life.” But of course, the very things that lead to affairs in more traditional couples can lead polyamorists to break their own rules.

She doesn’t always try to keep a marriage together. Sometimes recognizing that whatever glue held the couple together has lost its strength, she helps the partners to separate in the kindest ways possible.

“Love is messy,” she says. “Infidelity more so. But it is also a window, like none other, into the crevices of the human heart.”

And you may enjoy other NYCitywoman articles by Sally Wendkos Olds: