Meeting people is easy, developing a friendship is more complicated; it takes patience and initiative 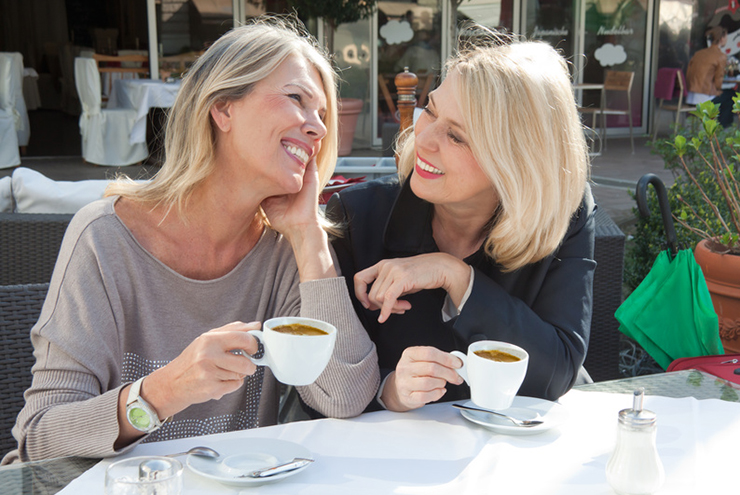 When I was in my early fifties, my husband, Mark, and I took a rafting trip in Idaho. On the trip, we met Lou and Victor and their children and we all hit it off. The night the trip ended, Lou called from her home in Las Vegas telling us how much she and Victor had enjoyed meeting us. I was touched by the gesture and a month later we invited Lou and Victor to a party we were hosting on Long Island. To our delight and surprise they flew to New York and spent the weekend with us. During the ongoing years, we didn’t see each other often due to the distance between us, but Lou and I became close friends—mostly through frequent phone conversations—and we supported each other through widowhood, problems with children, and other crises. We also had a lot of laughs. But if Lou had not made that first call, we probably would never have seen each other again. Now, three decades later, we’re both in our early eighties and still in touch. So I learned that a major key to making a friend involves letting someone know you like her—or him.

This knowledge became especially important five years ago when Mark died. I knew that in addition to my grief over his loss, my life would change drastically. Our three daughters were now independent and almost all our friends in the suburb where we had lived for more than forty years had moved or died. It was time for me to move. Fifteen months later I rented an apartment in Manhattan, where two longtime friends and my youngest daughter lived. But all three of these women led busy lives.

At first I felt alone in a way I hadn’t felt since as a student I had walked into a new school, wondering whether I would have anyone to sit with at lunch. Then in my seventies, the last thing on earth I felt like doing was making new friends. “Hello! Here I am! Like me! Do things with me! Keep me company!” Was it really worth the effort? Research says, “Yes!” People with solid friendships enjoy better health, are less likely to be depressed and more likely to stay mentally alert. As many studies have shown, widowed or divorced men who remarry or cohabit are healthier and happier than bachelors, and the same pertains to women. But since so many newly single older women don’t find a male partner later in life, it’s even more critical to have healthy friendships with other women. Some women are bitter due to the imbalance of eligible men; others don’t want the encumbrances of a second marriage or partnership and opt for developing a new circle of women friends.

“Ideally it’s good to set up three crucial elements: Find people who live near you, see them on a more or less regular schedule, and give the connection enough time to let a friendship take hold,” advises psychiatrist Jacqueline Olds, MD (no relation), who, with her husband, Richard Schwartz, MD, also a psychiatrist, has studied loneliness and adult relationships.

Soon after relocating to Manhattan, Marilyn Goldstein, a widow, joined exercise classes at Chelsea Piers where she connected with several women. One day after class Cynthia Mozlin, a fellow exerciser, suggested starting a book group. Marilyn was keen to do it, but didn’t know anyone to invite. Cindy responded: “What about the women here?” Five years later the book group is still going strong with members from the gym and friends of friends. Marilyn has become close with some members, and I too reaped the benefits when she asked me to join the group. (See NYCitywoman article, Pages That Bind: Book Clubs in New York City)

The Transition Network (TTN), a social organization for women over fifty, is another route for meeting new people. I joined soon after I moved here and have enjoyed its peer group program consisting of small groups that meet regularly and are organized around common interests, such as films, theater, art, books, and excursions. (See NYCitywoman article, Savoring the Second Half of Life)

In fact, I launched a new peer group for widows who were ready to talk about issues that developed in the second year of widowhood or later. It grew to ten members, including Betty and Frannie, who had met in a bereavement group. I subsequently became friends with both of them and we still see each other often, although we don’t regularly go to the group.

After meeting women in my building’s gym classes or through casual chats in the hallways, I started a group for neighbors. Residents invite other residents and we now have an active email group with thirteen members, through which we borrow chairs, give and get recommendations for housekeepers and jewelry repair, and occasionally meet for concerts and theater. I went to a 90th birthday party for one neighbor’s mother and a birth party for the new grandson of another member.

Meeting People Is the Easy Part

But developing a friendship is more complicated than simply meeting a new person. We can meet people waiting at bus stops, standing in line, riding the elevator, or even sitting next to someone at a nail salon. I know women who have developed friendships from all these situations. But it’s what happens after you meet someone that turns an acquaintance into a friend. When you find a potential soul mate, don’t be shy about making the first move. Many of us are insecure and afraid of rejection, thinking, “If she really liked me she’d call me.” The other person may be thinking the same thing about you, so here’s what I’ve learned: Someone has to take the initiative.

Years ago I invited Silvia Koner, my editor at Redbook, to dinner at my home on Long Island. I had never met her husband, but I invited him too. We all had a lovely evening, and even after Silvia retired and we no longer worked together, we would see each other a few times a year. When I moved to Manhattan four years ago, Silvia and I became close; we still see each other often. This and other experiences validate the results of a study in which researchers studied pairs of acquaintances and learned that when you think someone likes you, you’re more likely to like them. (You realize what good taste they have!) It’s important to let someone know that you like her and want to be friends with her. If she responds positively, you can proceed to invite her to a museum, show, or other event. If she doesn’t respond positively—or not at all, you’ll know not to waste your time pursuing her.

I once had an extra concert ticket and called 18 women before I found someone who was free that night. I’m sure some were genuinely busy; others weren’t interested. But many remembered my gesture and eventually reached out to me.

And Then There’s the Internet

One out of five dating couples meets online these days—and so do people looking for new friends. If you decide to join a friendship site, write a personal profile and ask a buddy to tell you whether you come across in a welcoming way. (This kind of self-analysis will also help you in current friendships.) See meetup.com that lists special interest groups in your neighborhood and girlfriendsocial.com where you can find platonic women friends online.

“The fear of being left out, which often goes along with a major life change, is deeply embedded in our evolutionary nature,” says Dr. Schwartz. “It can motivate us to seek new connections or demoralize us into giving up. Throughout life a dash of anxiety often spurs us to better performance.” The task may seem daunting, but developing new friends is worth the challenge and the effort.

Girlfriend Social Find platonic women friends (Most members seem to be under 50, but you might find women you like in your community—and besides, it’s refreshing to move out of our age groups.)

Sally Wendkos Olds has written about adult friendship in Human Development, one of the three college textbooks she coauthored with Professor Diane E. Papalia. As they worked together for more than twenty-five years, they became good friends.