Savoring the Second Half of Life

The Transition Network helps professional women maintain lives of learning, engagement, and leadership in the world. 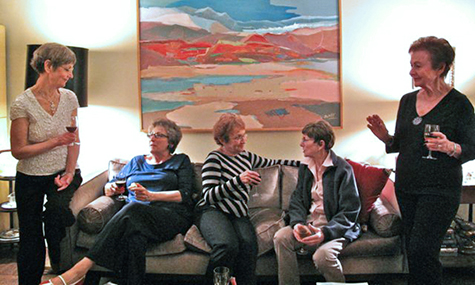 Charlotte Frank and Christine Millen belong to the first generation of women who achieved widespread success in the corporate world. But when Frank, an executive with the Port Authority of New York and New Jersey, and Millen, a partner at the consulting firm Deloitte, faced retirement a decade ago, they did so with the same apprehension that many high-level men experience: How would they cope when they lost the status, camaraderie, authority, and challenge of their careers?

After conferring with likeminded friends (who were to become “founding members”), Frank and Millen pooled their skills and resources and created The Transition Network (TTN), an organization designed to nurture women who are transitioning out of full-time careers or coping with the inevitable problems of aging. Through small-group interactions, programs, lectures, and workshops, TTN would provide support and direction for women over 50 who were looking for new ways to channel their skills, energy, and education.

The idea hit a nerve: TTN now has 11 chapters nationwide (and 4 in formation), with a total membership of 6,000. It has also inspired what TTNers call “the book”—Smart Women Don’t Retire: They Break Free, written by founding member Gail Rentsch. Its theme, “From working full time to living full time,” nicely captures the TTN take on life after retirement.

I belong to TTN’s flagship New York City chapter. It’s the largest, with 600 members; the annual dues are $125 (but less in other chapters). We are editors, social workers, doctors, nurses, teachers, accountants, college professors, lawyers, corporate executives. We are in various stages of professional and personal transition—working full-time, part-time, retired; married, partnered, single, widowed, divorced. We range in age from our fifties to our eighties. What we all have in common, though, is perspective. We are all discovering what it is like to be an “aging” woman in this society.

A long-term goal of TTN is to spark a change in Americans’ dismissive attitude toward older women. At last year’s annual Pride of Age banquet, Frank and board member Mona Kreaden shared their Thoughts About Our Milestone Birthdays. “When we began to age, we panicked,” Frank acknowledged. “Terrified, we lied about our age, were shamed by the approach of milestone birthdays. It was clear we were at the point where we needed to define ourselves more appropriately…not looking at [ourselves] as a cohort with rapidly accumulating deficits. We needed to look at our longevity with pride and celebrate our lives as well lived.”

According to executive director Betsy Werley, TTN offers members “Information, Inspiration, Community.” And it is “community” that members value the most highly. A 2009 New York City chapter survey asked what impact TTN had had on respondents’ lives; 87 percent checked: “Provided a community of women whose friendship and support I value.” 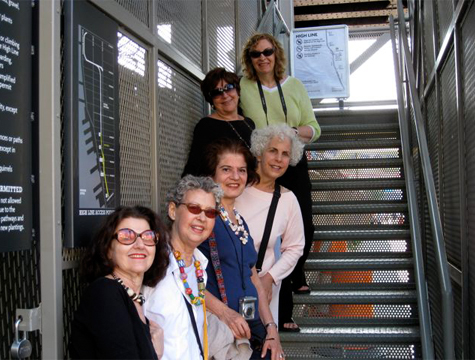 Members of the In Focus digital-photography group on a shooting trip to the High Line.

But peer groups are the heart of TTN—members’ regular source of warmth, intellectual stimulation, and support. There are 60-odd discussion and special-interest groups in the New York chapter; each has sprung up because someone has an interest or issue she wants to share with compatible women.

Members’ enthusiasms range widely: The special-interest groups include (among many others) meetings devoted to poker-playing, doing improv, navigating the single life, sharing a love of classical music, harmonizing on Broadway songs, travel, exploring New York City, and advocating for abused women. The general interest discussion groups, composed of 8 to 12 women, meet monthly, usually in one another’s apartments, for wine, snacks, and the chance for thoughtful reflection on a topic chosen the month before. Sometimes the theme is lighthearted (“sharing our passions”), sometimes it’s serious (“ageism,” “the road not taken,” “dealing with our partners’ transitions”).

These are not therapy groups or griping sessions, “but they do raise consciousness,” says Kreaden, who, in the course of her seven years as a “full-time volunteer” for TTN, has sparked the creation of many of its peer groups—and the chapters in other regions. “The key thing is that you’ll meet women you would not normally meet, and these women are active and engaged. All of them are thinking about how to live their lives differently. You relate to these women in a different way than you do when you’re hanging out with your best friends. Being with these women meets our intellectual needs.”

And our social needs as well. Anita Jaffe’s peer group, The Visionaries, just celebrated its fifth anniversary. Why did they bond, this professionally diverse group consisting of a nursery-school director, an events planner, a speech therapist, a corporate-marketing researcher, a computer-systems consultant, a fine-arts dealer, a law-firm administrator, a patient-advocacy director, and a newspaper reporter? Jaffe explains why in the New York City chapter’s newsletter. One pleasurable ingredient was the outings her group has taken: “That went a long way toward solidifying our friendships,” she writes. “Over the years, we’ve been to the New York and Staten Island Botanical Gardens, Storm King Mountain, the Grounds for Sculpture, the Philip Johnson Glass House, and Wave Hill. We went by car, by train, or by bus, and laughed, picnicked, took photos, and enjoyed each other’s company immensely.”

“People who have retired and are moving into TTN for that reason are coming through one doorway,” says a widow who cherishes her privacy and did not want her name mentioned. “But the doorway for someone who has been married and widowed is a little different.” TTN  helped her “orb back into life” after her husband’s death—and “one of the most exciting things about it, for me, was establishing new relationships with people who had such diverse backgrounds. All of us tend to socialize with people in our own profession. In fact, I had never met a writer before I joined TTN.” She also values the easy sense of connection members feel at a gathering where everybody understands their allusions. “I enjoy being with younger people,” she says, “but it’s nice to mention a record or a movie and not have to explain what it is.”

If you broke both your legs, who would care for you? Even if  friends and family are nearby to rally ’round, they can get “compassion fatigue” during a long recuperation.

TTN’s co-founder, Charlotte Frank, decided to create a network of helping hands—TTNers who would give fellow members (even those who didn’t know one another) “strategic assistance” after an accident or during an acute illness.

Frank received a two-year grant from the New York State Health Foundation to develop the Caring Collaborative, a medical-information exchange and corps of volunteers willing to visit members, take them home from a test or procedure, pick up prescriptions, bring  meals, and even provide pet care. When CC launched in 2008, more than 200 New York members signed up, each offering to provide the service that suited her.

CC is now flourishing on its own, with the help of a part-time TTN coordinator. (TTN’s Long Island and San Francisco chapters have adapted the program to their needs.) Members now know that help is available, whether they need an escort home from a colonoscopy or months of sustained assistance. Just recently, a TTNer did break both her legs—she was hit by two cars! During her lengthy recovery, CC members visited her regularly, took her to doctors’ appointments, and researched her complicated insurance issues. “We are hard-wired to help each other,” Frank maintains. “The Caring Collaborative connects those who want to give and those who need help. What a way to build community as we age!”

Deborah Harkins, an editor at Women’s Voices for Change, was an assigning editor at New York magazine for more than 20 years, the articles editor of The Modern Estate, a columnist for the New York Daily News, and associate editor at NYCitywoman.com.