Marjorie Eliot learned piano as a child; now she performs for jazz lovers every Sunday in her Harlem apartment. 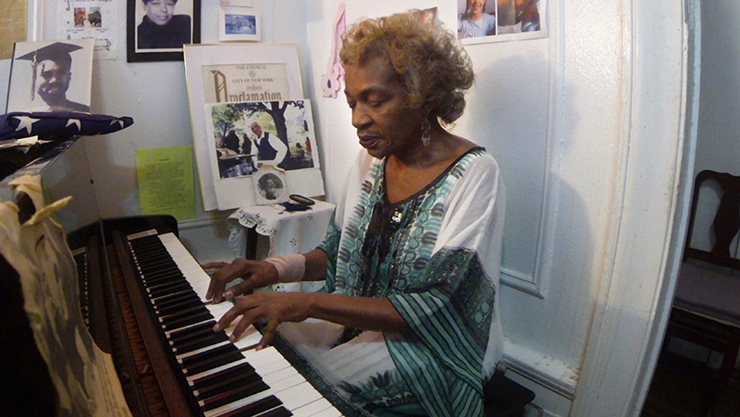 The stately Beaux Arts building at 555 Edgecombe Avenue, known officially as the Paul Robeson residence, sits at the northern edge of Harlem’s Sugar Hill, overlooking the Harlem River. Also known as “Triple Nickel”, it was built a century ago and, by 1993, it had achieved both city and federal landmark status.

Once home to the legendary singer and civil rights activist Paul Robeson, it was also home to musician Count Basie, civil rights activist Canada Lee, psychologist Kenneth Clark, boxer Joe Louis, and other notables. Ironic, since in the first 25 years of the building’s existence, only white people were allowed to live there.

Nowadays jazz lovers from around the world think that the tenant in Apartment 3-F, pianist Marjorie Eliot, should also be landmarked. Although Marjorie is considerably younger than the building, she’s certainly on the right side of fifty, since that’s the age of her son, Rudel Drears. Rudel, also a pianist, often performs with his mother and other outstanding musicians who play in Marjorie’s living room every single Sunday afternoon, all year round, no holidays off, no sick days, no vacations. Their medium is jazz, which Marjorie calls “African-American classical music,” and with which she brought up her five sons.

Marjorie herself learned to play the piano before she even went to kindergarten and she continued the family musical tradition with her children, each of whom learned to play at least one instrument. Her youngest son, Shaun, has been learning to play the recorder.

What kept this loving mother and musician going? She credits the music she shares with those who come to her modest apartment in upper Manhattan. Her present career began in 1993 with the establishment of Parlour Entertainment, just after Phillip’s death. That August she performed in his memory at the Jazz Festival held at the historic Morris-Jumel Mansion across the street from her home. Since then, she has performed at the Mansion every August. The next year, in 1994, she presented her first jazz concert in her own apartment.

And she is still performing. Every Sunday the door to Studio 3-F opens at 3 pm and people in casual dress just show up, making it wise to come early since there are no reservations and no reserved seats. When I attended my first concert the male friend who came with me had dressed up for the occasion in honor of this great lady. He was the only man in the room wearing a tie, aside from the musicians and actors.

We took seats in the front row on folding chairs right opposite Miss Marjorie’s upright piano, and in the dimly lit parlour, mood lighting bathed the room, filtered through antique-looking colored sconces. On the walls were photos of her sons and her friends, copies of letters, fliers, programs and newspaper stories. Behind us and along the sides of the room there may have been some forty visitors; on many Sundays the number tops fifty.

The music starts at 3:30. During intermission a neighbor distributes fig bars and orange juice, returning later with two bags, one to pick up used cups, one to accept donations. (I had full confidence that in case any donations found their way into the bag for the cups they would quickly be fished out again.)

What do these concerts mean to Marjorie Eliot? “It’s just who I am,” she told me. “Why does a carpenter build houses? I am an artist, and thankfully, the gods have made it possible to produce my own work and do it my way so I can connect the dots with sadness and joy. Nobody ever told me ‘You can’t do it’ and so I do it. I have met wonderful people throughout my life; they know why I do it and I am excited by the honesty that people bring.”

Despite her standing as an international institution for more than twenty years, there is nothing “high-falutin” about Marjorie Eliot. The Sunday afternoon I first attended her jazz parlour she answered the door herself, slender in a simple loose dress, her hair a mixed gray-and-strawberry blonde nimbus held up with a hairband. Some visitors brought bouquets of flowers; they tend to be regulars who attend once a month or even every week. When I phoned her a day later, she answered her own phone. That’s who she is.

She has now been living in the same apartment for 35 years. Her career has also included stints as actor, playwright, and teacher; she established a children’s theater and has performed in hospitals and colleges. Currently she teaches a Jazz Journey class to Teamsters Local 237 and manages to teach and perform in schools and nursing homes. And she still defines herself as a “mommy.”  “I never say my children  are gone. They are very much with me.”

The Sunday afternoon programs vary from week to week. The day I was there Marjorie played the piano for two hours straight without a break and without any written music. Accompanying her were trumpeter Korichi Yoshihara, Parisian-born Sedric Choukroun, who played sax, flute and clarinet, and cabaret singer Jill Melanie Wirth. (The audience was just as multi-ethnic as the performers.) Since 2015 Marjorie has also written, staged and directed her own theatrical pieces. “In the Quiet Night-time of My Sleep-less Dreams” featured moving appeals by four actors to “take care of the little brown-eyed boys and the little brown-eyed girls.” At about 5:30 the concert ended with a rousing audience-participation rendering of “When the Saints Go Marching In.” As we walked outside into all the excitement and all the noise on the street, we knew that we had been privy to a special and thrilling experience.

Marjorie’s Jazz Parlor (555 Edgecombe Ave., the Paul Robeson Residence) is easy to get to. From the west side take the C train to 163rd and Amsterdam, walk east one block to Edgecombe, then south to 160th Street. The east side trip involves changes of trains, but still takes less than an hour from midtown east.

Afterwards, you can stop for a treat and coffee at Duaa’s Cafe (500 W. 162nd St.) Or Taszo Coffee Bar & Panini (5 Edward M Morgan Pl. and 157th, near the 1 train). You could linger in the lobby of Marjorie’s Triple Nickel looking up at the large circular stained glass ceiling window that was painted black years ago in fears of either Nazi or nuclear attack (accounts vary) and never cleaned up again. After the concert you can exit through the side door at 160th Street, as privacy-seeking tenants have done over the years.