Members often form strong bonds that keep a club going, even when they disagree about a book. 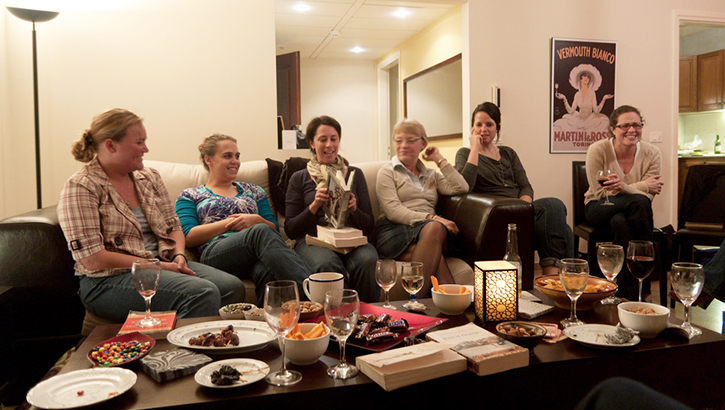 New Yorkers love to read—and New Yorkers love to talk, so it’s no surprise that the book-group-discussion landscape here is a lively one. How many such groups are in and around the city is hard to know, since most are informal and there’s no central registry.

Years ago (pre Betty Friedan) as the mother of two babies just moving to a new city and desperate to talk about something besides diapers and doodies, I started a monthly book club among my neighbors. It was a life-saver, letting me realize that my mind had not turned to mush with stay-at-home motherhood—and also helping me to make friends. When I moved to Manhattan three years ago, recently widowed and starting another new chapter of my life, I was delighted to be asked to join an ongoing book group.

In talking to members of various book groups, I learned (once more) that I’m not unique: many groups were started for the same reasons I started mine—to meet like-minded people, to make new friends, to talk about “something besides our children,” and to get to know people by seeing how they react to the books you read together.

Aside from their prime purpose, most of the groups I learned about have several things in common. Most get together monthly, meet in each other’s homes for about two hours, rarely exceed fifteen members, and serve food. (New Yorkers like to eat, too. But when the culinary aspects get elaborate—and sometimes competitive—the group usually scales back so digestion doesn’t overwhelm erudition.) Every group seems to function in its own way, in terms of choosing books, presenting them, handling discussions, and everything else.

Donald Parker’s group in Nassau County, which has been going strong for more than thirty years, has the most structured system of any of the groups I learned about, maybe because it has refined its procedures after all those shared pages. The group alternates between fiction and nonfiction, and at every meeting people can suggest a book and briefly describe it. A member keeps a list of the suggested books, which are then voted on at the next meeting.

“We never choose a book on the current best seller list to avoid problems with availability,” Don told me, “and we check to be sure the library system has enough copies for everyone in the group. Finally, the book has to be ‘discussable.’

“Some books are a good read,” Don said, “but they don’t lend themselves to a lively discussion.” In my group, while one member said she liked Alice McDermott’s Someone: A Novel she thought it was not discussable. But then another member, an author herself, said, “If the book made such an impression on you, then we should discuss how the author managed to pull that off.” So the book made the cut.

Upper West Sider Betty Mosedale’s group, run by The Transition Network (an organization for women “embracing change after 50”), follows a similar procedure, with members chosen in rotation to recommend books, keeping in mind two requirements: they have to be out in paperback and be under

500 pages (except for a summer selection, which can be a long tome). Then the group votes.

These days, when so many people use e-readers, fewer groups require library or paperback availability.

Another criterion is theme, with some groups specializing in history or mystery, some in current fiction and some in classics, some in books written by authors from different cultures. I didn’t find any that specialize in humorous books—maybe there aren’t enough funny reads. Or maybe we New Yorkers are too serious about our reading.

Typically, the person who recommended the book does a little research on the book and its author, and briefly presents this information to the group. Usually this presentation does not include reviews, to avoid influencing the discussion. The job of moderator may be taken on by the host, the person who recommended the book, or a designated facilitator. And some groups are anarchic, with the person with the loudest voice offering the most opinions.

“In the beginning I hated being in my group,” one woman told me. “The conversations went off on tangents, sometimes with three going on at one time, and we spent very little time discussing the book. I came to like the other women, so I put up with the disorganization, but I still wish we had a moderator to lead the discussion and to keep people from talking about issues in their own lives that have nothing to do with the book we’re reading. I suggested this once, but I seem to be in the minority and so nothing has changed.” Two members of the 1962 Barnard alumnae book club told me that what they like best about their group is that we “we stay focused on the book.”

What Keeps Members Coming Back Month after Month

“I feel a strong sense of loyalty to my group,” Betty told me. “We have all made a commitment to come to each meeting and to read every book. But also, I like getting to read books I might not have known about otherwise, and I find the discussions really involving. Plus—I like the other women. When you live alone, you especially appreciate the social aspects of a group like this.”

This was the common thread among everyone I spoke to: “I like the people.” Members often form bonds that become stronger with every discussion, even though readers may strongly disagree about the books. Generally, the good feeling is the glue that keeps a group going.

One groupie whose members (like most) meet in each other’s homes told me, “I love the book group, and this is a new thing for me—I’m not a groupie person at all. But I like being with these interesting, smart women from different backgrounds—and it’s fun going to the different members’ apartments and getting to know them by seeing them in their own environment and filling out the image of who they are.”

East Sider Carol Karasick, a voracious reader who never had any interest in joining a book group until a friend invited her, has found that sometimes she has enjoyed the discussions about a book more than the book itself. Although she found herself in the minority not liking Hilary Mantel’s Wolf Hall the group’s take on that book led to a decision to read Eight Months on Ghazzah Street, an earlier book by the same author, which Carol found fascinating, especially for its window into a different culture.

And West Sider Bilha Goodman found that her group challenges her to read differently. “When I first joined the group a year and a half ago, I was certain that I’d have lots to contribute, and I was the first to raise my hand. Then when I listened to other people, I realized how much more there was to that book than I had at first noticed. Now I find myself listening closely to what people have to say.”

What Happens When You Don’t Like the Book of the Month?

“The person suggesting one particular book referred to it as a ‘page-turner,’” Don told me with a laugh. “Well, I certainly turned the pages fast—but that was because I hated the book and just wanted to get through it as quickly as possible.”

“If I don’t read the book,” one woman told me, “and go to the discussion, then that ruins the book for me in case I change my mind later. So I don’t go to the meeting when we talk about it—unless I’m sure I won’t ever read it.”

Some readers adopt the “Rule of 50” devised by librarian Nancy Pearl, author of Book Lust, which states “If you still don’t like a book after slogging through the first 50 pages, set it aside. If you’re more than 50 years old, subtract your age from 100 and only grant it that many pages.”

And sometimes a book that you don’t like can lead to an interesting discussion, which was the case for me (and coincidentally, for two of the people I spoke to) with Howard Jacobson’s novel The Finkler Question. It was the first book I read with my new group and so I forced myself to finish it. I ended up glad that I did because of the lively back-and-forth about anti-semitism that took place at our meeting. Because of that discussion I was intrigued enough to go to the New York Public Library’s event featuring that author, and to hear his take on this book.

Bringing the Author to Your Book Group

In New York many groups include someone who knows someone anc can entice an author to come for free or for a nominal fee. The 1962 Barnard Alumnae Group hosted writers Anna Quindlen and Anne Roiphe, both alumnae from other classes. But if you don’t know an author, you can contact a new service: Novelist Jean Hanff just launched Book The Writer “It’s fantastic to be able to talk about a book you just read with its author,” Jean said to me. “It’s a rare opportunity to get the story behind the story, and it can be an absolutely magical experience.”

Booking an author costs a group $600, and the site also offers Pop-up Book Groups in which a date has already been set with a particular author, for which individuals can register for $50. To find out about the nearly 100 authors who have signed onto the project, for more information, and to ask questions, go to www.bookthewriter.com.

So Why Wouldn’t Every Reader Want to be in a Book Group?

“I love to read for my own enjoyment, and I read a lot. But I hate the idea of anyone telling me what to read,” one friend told me. “I also hate talking about books and like to form my own opinion, not listen to what other people think.

“I was in a book group for a while with a group of women I really liked. We read the book but when we got together we found a lot of other things to talk about. A couple of the women complained that we didn’t talk enough about the books but that was what I liked about the group, the chance to get together with people I liked and to talk about whatever we felt like. After the group fell apart, I never looked for another one, and I’m perfectly content reading whatever I feel like, whenever I feel like, with no pressure.”

The New York Public Library sponsors book discussions at many branches. To find out about your branch, go to Book Discussion Groups in Neighborhood Libraries.

Or if you’d like to “talk” online about a book, go to the library’s Reader’s Den. See whether your college alumni association sponsors one or more NYC groups.

Ask at your church or synagogue.

If you’re lucky enough to have a local book store, ask there.

If all else fails, organize one yourself. For suggestions from the Ur-book club person, Oprah Winfrey, go to Oprahs Book Club.