In her book My City Highrise Garden, feminist Susan Brownmiller describes her passion for gardening on her sky-high wrap-around terrace in Greenwich Village. 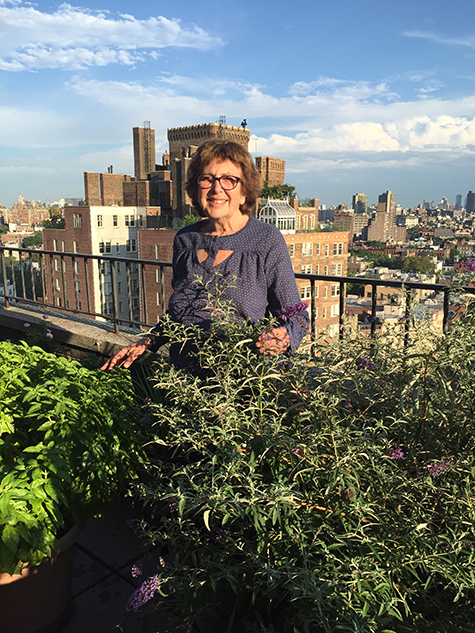 Susan Brownmiller’s book, My City Highrise Garden (Rutgers University Press, 2017), describes her adventures with nature—plants, insects, birds, homo sapiens—on the twentieth floor of a Greenwich Village building, where she has been gardening for the past 35 years. Although I am not a gardener myself, I am a feminist and I was enthusiastic about meeting the author, a ground-breaker in the women’s movement and a passionate gardener. And who knew that a book about gardening would teach me about life, even at my age?

I admired Susan for her 1975 trailblazing book, Against Our Will: Men, Women, and Rape, which The New York Public Library included in its list of the 100 most important books of the twentieth century. But I had never met Susan so I didn’t know about what she calls her “gardening career” or her “consuming hobby,” until a mutual friend, onetime Village Voice writer Robin Reisig, told me about Susan’s new book.

When I expressed surprise that this firebrand activist had written a book about an activity I considered tame, Robin said, “I don’t see any contradiction other than people who work very hard—and Susan does work very hard at her writing—often don’t take the time for something like this.” 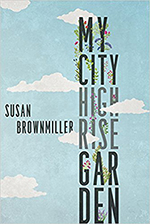 And playwright, author, and community gardener Barbara Garson told me, “Many of us turn to gardening as we grow older because we like things that grow, and if anyone is entitled to tend her own garden at 80 it’s Susan.” The unifying thread, of course, is that Susan Brownmiller is a powerful writer, whether she’s speaking out about rape, feminism, Vietnam, or gardening.

Susan graciously accepted my request for an interview and guided me through her magical terrace. I recognized some of her plants from the book’s vivid color photos, taken by the author herself. As we walked around, it was thrilling to see her field of daisy-like golden coreopsis, bordering the parapet’s wrought-iron railing above the river and the city below. This effort alone took years of hard physical work and thousands of dollars to create. She writes, “Repetitive labor is an unavoidable duty for everyone with a garden, except for those who rely on hired help,” and adds that if she did not put in the work, “I could not call myself a gardener.” On this day in mid-August, the coreopsis was one of at least twenty plants—some in brilliant bloom, others in leaf, a few of which I recognized. 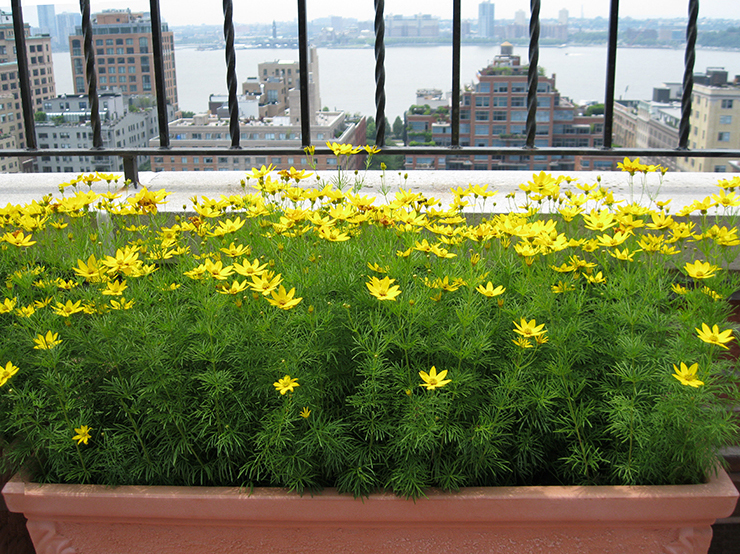 One sentence in Susan’s book, “Nobody owes me a sweeping view of the Hudson” really hit home. After I moved into my sixth-floor apartment on West End Avenue six years ago and then two skyscrapers rose in front of me, I lost my own views of the river, moon, sunsets and occasional fireworks. Susan told me that her vista once highlighted the Statue of Liberty and went all the way up to the George Washington Bridge. You can still see the Lady in the Harbor from Susan’s terrace, but apparently not as prominently as before. Of course, to me and to most New Yorkers, Susan’s wrap-around panorama, which you can see from her art-filled living room that has comfortable seating space for robust gatherings of feminists, is still spectacular.

But feminism is surprisingly absent from this book. There’s only the modest mention of “a book that I wrote [that] made a lot of money,” which allowed her to move up from her fifth-floor apartment, rent a 20th-floor penthouse, and enter the all-consuming hard work of growing her garden. That book was, of course, Against Our Will, which forever changed the discussion about rape and its societal and legal landscape.

But in this new book Susan made a conscious editorial decision not to mention the women’s movement. “I thought that was extraneous and didn’t belong in a gardening book,” she told me. She did, however, put in a few fascinating stories about women gardeners in history. Eleanor Perenyi, for example, author of Green Thoughts: A Writer in the Garden, “was the first author to tackle male chauvinism in horticulture head on.” And after Susan read many books by people who landscaped on huge estates, she thought, “What about books for us? People in cities who garden in the space they can carve out, either at ground-level or up high?” And thus My City Highrise Garden was born. 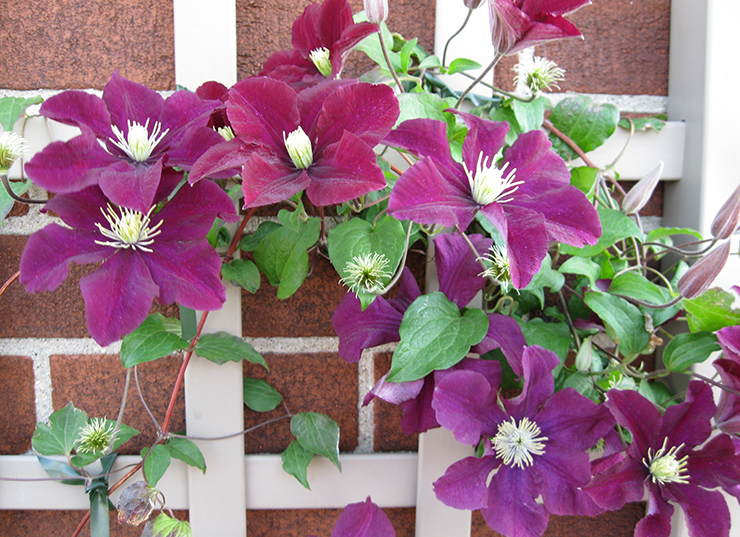 Even now at the age of 82, you can see Susan’s dedication and willingness to put in long, demanding hours. That same commitment served the women’s movement well when Susan was a pioneer in the second wave of feminism that flowered in the 1960s and ’70s, a movement she described in her gripping 1999 history, In Our Time: Memoir of a Revolution. That book urged readers to remember a world when men and women were shuttled into different jobs with different futures, when husbands had to sign their wives’ credit card applications, when unsatisfactory sex lives were usually the woman’s fault, when rape was always her fault. That revolution succeeded so well that today’s young women can’t imagine what life used to be like.

I do remember those days, when I became a charter member of my Long Island Chapter of the National Organization for Women, a participant in consciousness-raising groups and a writer who focused on women’s issues. 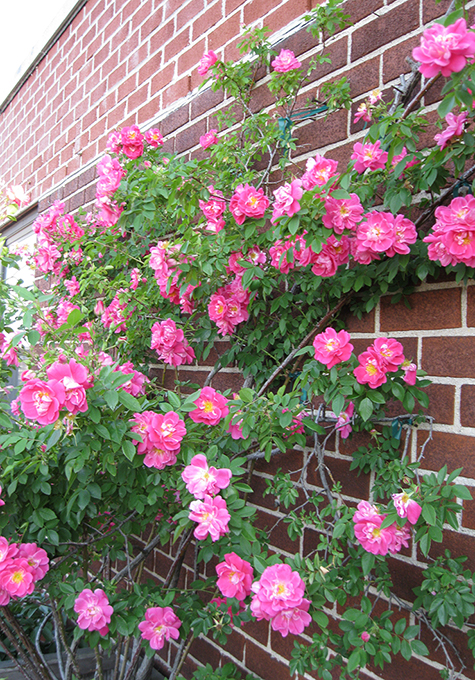 As for the women’s movement today, Susan said, “I feel it’s terribly fragmented and confused. I went on the Women’s March and made three signs about women’s reproductive rights. But I met marchers whose primary issues were climate change. Yet young women still have issues related to being women. For example, they’re told to look sexy, that they have just as much right [as men do] to go to a fraternity party and have a few drinks—and then they get raped. In a decent world they should be equal to men, but in ours they’re not.”

She compared the situation of a young woman who goes to a fraternity party, gets drunk and is then surprised by being raped, to a bicyclist riding in city traffic without a helmet and is astonished by a head injury. She has been accused of blaming the victims when she makes statements like this. How does she counter such criticism? “We have to take responsibility for our actions,” she said in her typical forceful manner. At the same time, she does not let rapists off the hook. In talking about Education Secretary Betsy DeVos’s push for “due process” that makes it harder to prove sexual assault, she said, “The theory that a young man’s life can be permanently upended by an unproven rape charge is on the rise and part of the current confusion about the nature of sexual assault.” 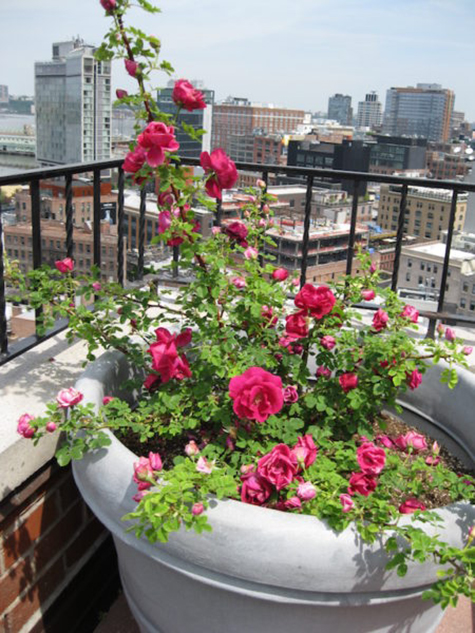 Of course, rape is only one of the many ways society still sets double standards for men and women—in business, family responsibilities, politics, in so many ways, as we saw so dramatically in the 2016 Presidential election. But Susan does not tackle any of that in her new book. Instead, she focuses on gardening—and shows it as a metaphor for life, with its never-ending growth, continual loss and constant change. After her birch trees had thrived on her terrace for twenty-five years, her building’s renovation demanded they be trashed. “During this quarter-century,” she writes, “my dog died, my cat died, the man I’d been living with went elsewhere, and D., my brilliant landscape architect, lost his life in a fire. I had grown used to departures.”

And yet with endings also come new beginnings. “I used to worry that I would run out of space on the terrace,” she summed up. “But enough things died so that I was able to put in new plants. Now I just want to live out the rest of my life with my twentieth-century skills and my garden.”