Today the majority of American runners are female. How did we get here? One pair of sneakers at a time! 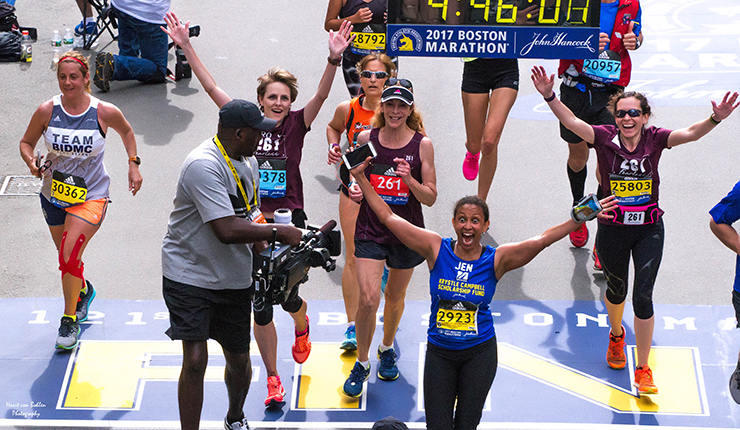 This past November 36-year-old Shalane Flanagan from Marblehead, Massachusetts broke a long drought in the US competitive records by coming in first among women runners in the New York City Marathon. This race had not been won by an American woman since 1977, forty years earlier, so we were justifiably gratified. But fifty years before Shalane’s victory another woman athlete made female runners proud.

Back in 1967 a runner named K.V. Switzer finished the Boston Marathon. She had entered using her initials instead of her first name, Kathrine, because at that time women were not allowed to enter long-distance races. Race officials and doctors alike claimed that running the 26.2-mile distance of a marathon was damaging to women’s health and femininity—some even warned that a runner’s uterus could fall out!

But once Kathrine Switzer started putting one shoe in front of the other in the race, she made no attempt to disguise her femininity—she was clearly womanly with her long hair, lipstick, and eyeliner. Then when one of the race officials saw that a member of the dreaded gender was sharing the track with men, he sprang onto the course at the two-mile mark and tried to rip off her bib number, #261, and throw her out of the race. The photo of that attack was flashed around the globe and was included in a Time-Life book as one of 100 photos that changed the world. 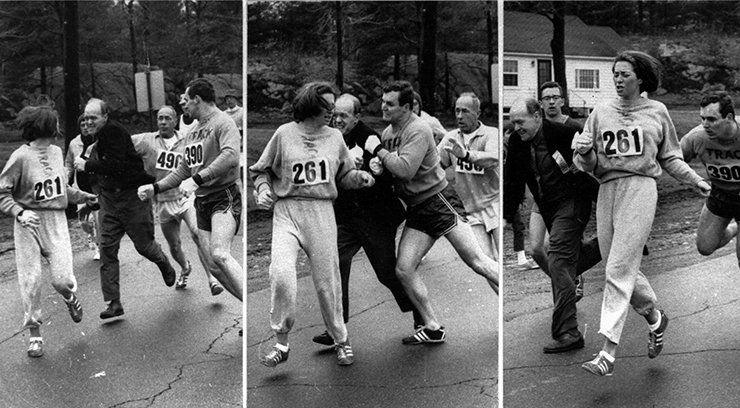 Other participants and race officials came to Kathrine’s defense as she went on to finish the first of the 41 marathons she has run to date. In 1974 she was the women’s victor in the New York City Marathon and this past November 2017, at age 70, she completed the race again, coming in second in her age group. “I wasn’t trying for my best time this go-around,” she told me by phone from Wellington, New Zealand, where she and her husband live several months a year when they’re not at home in New York’s Hudson Valley, “because the whole time I was running I was giving interviews about women’s running.”

I am in awe of Kathrine Switzer, not only for her sports career, but also for what she has done to advance the cause of women’s running. As a small-time runner myself, who took part in many local 5- and 10-kilometer (3.1- and 6.2-miles) neighborhood races before working up to my first and only marathon at age 60, I know how much time and effort running alone takes. On top of that, Kathrine has done much to ignite the women’s running boom.

And it is indeed a boom. Today the majority of American runners are female, accounting for 58 percent of race participants. How did we get here? One pair of sneakers at a time. In 1970 only one woman runner—compared to 55 male runners—entered and finished the New York City Marathon In 2017 there were 21,091 women participants to 29,680 male participants, or one woman to 1.5 men. Back in 1980 10 percent of marathon runners in the U.S. were women; last year the percentage rose to more than four times that number. And much of the credit goes to Kathrine Switzer.

Not only is Switzer a winning runner, she is an activist, organizer, broadcaster, and writer who has created the Avon International Running Circuit of women-only races in 27 countries; more than a million women participating from 1978 to the present. Spurred on by the turnout for these events, in 1984 the International Olympic Committee added a women’s only marathon.

Kathrine ascribes this great increase to the fact that walking and running are the fastest, easiest, and least expensive roads to fitness for women of any age. “Running and walking,” she emphasizes, “give women fitness, self-esteem, and empowerment. They release endorphins, so you can start out on the crappiest day of your life—and end up feeling great. These simple activities are also time-efficient, inexpensive, and can be squeezed into a busy day of job, children, and home.”

Also, as I found out myself, no day is a bad day for walking or running. All you need are the right clothes and shoes for the weather. I used to hate going outside in the rain, but once I began a daily fitness routine, either running or walking, that changed and I welcomed whatever conditions came my way (well, almost—I never learned to love going out in blizzards or on icy roads). 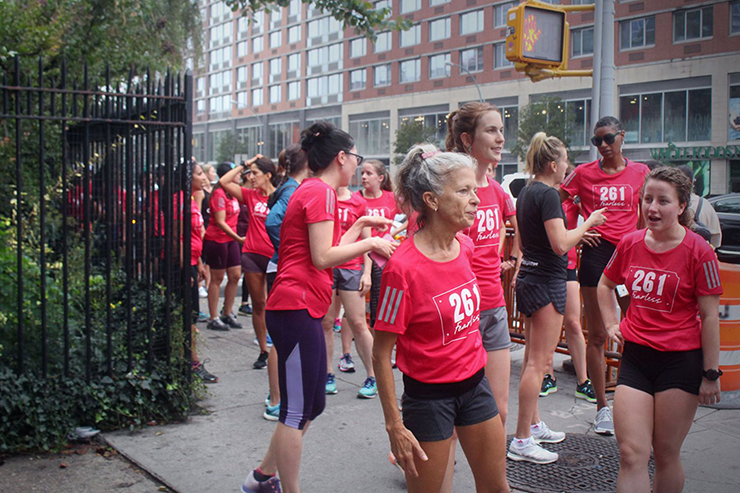 To encourage women to reap the health and wellbeing benefits of walking and running, Kathrine founded 261® Fearless, Inc. [pronounced two-six-one], a global non-profit, tax-exempt organization named after the numbers on her first marathon bib, the one the official tried to tear off fifty years ago—and the number that the Boston Athletic Association just retired in honor of Kathrine’s 50th anniversary running the Boston Marathon this past April.

The 261 Fearless local clubs were set up to empower and unite women walkers and runners of all abilities, all body types, ages, ethnicities, religious backgrounds, socioeconomic statuses, and sexual orientations, with special attention to women’s training needs. When women exercise together, they support, inspire, and encourage each other. It was hard for me to tear myself away from reading some of their life-changing stories on the website.

Anyone can join 261 Fearless. Just go to the website to find your local chapter, and if there isn’t one, the organization will help you start it. Kathrine already knows of three women in New York City who are interested in starting a chapter here.

Kathrine’s three books include 26.2 Stories, which she wrote with her husband; Marathon Woman, a memoir; and Running and Walking for Women over 40: The Road to Sanity and Vanity. In this last book, updated in 2014 and available only as an e-book, she offers tips for women who want to begin an exercise regimen incorporating walking or running.

The following is a sample of her recommendations for a Women’s Walking Training Program. For even more help, get her book, Running and Walking for Women over 40.

If you have never fitness-walked or run, Kathrine recommends a safe, reasonable approach. First, get an okay from your doctor for an exercise program. Then get a good pair of shoes from a store where the salespeople run themselves so they will know how to fit you. (I like the Super Runners shops.) Or wear a pair of comfortable, supportive shoes you already have. Wear a watch or bring your cellphone. And wear clothing in layers so you can gradually peel off as you warm up, because you will.

Walk purposefully for just a few minutes. Don’t push, don’t hurt, and don’t become breathless. This should be fun! You’re approaching this basic activity in a new way. Keep a training log to keep track of how far you go every time and how you feel. Go out every other day and add a minute every time. By the second or third week, if you’re completely comfortable with your current activity, increase your distance or the amount of time you walk by 10 percent a week. Build up gradually to a thirty-minute walk; if you want to progress to running, gradually add short jogs and aim for a goal of a 5-kilometer race in two months.

This is the approach Kathrine used to start her 70-year-old mother on a walking program. “I was so proud of her,” she told me. “First she walked once to her mailbox, then she walked there twice, then to her neighbor’s, then around the block, and pretty soon she was walking three miles every day.”

Kathrine talks vehemently about myths of ageing, which we can see being demolished all the time. The oldest woman to complete the 2017 NYC Marathon was 84-year-old Ginette Bedard, who crossed the finish line after six hours and 12 minutes, just 18 minutes slower than my (sluggish but thrilling to me) finish when I was a mere youngster of 60. 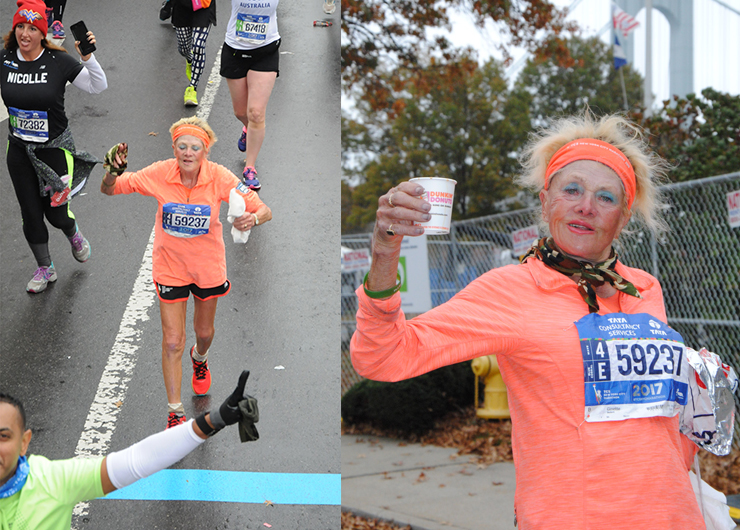