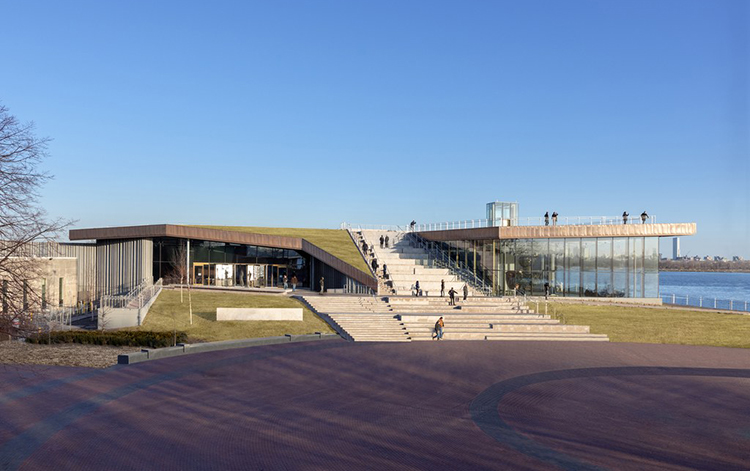 Chisels scrape, saws hum, hammers beat, while workers chat in French. In the studio of Frédéric-Auguste Bartholdi, workers are busy creating what will become one of the world’s best-known statues, listed by the U.N. as a World Heritage Site.

This is but one of the immersive scenes in the new Statue of Liberty Museum, opening May 16 on Liberty Island. (See a time-lapse view of the construction, that started in 2016.) At 26,000 square feet, the museum, a $100 million venture funded by the Statue of Liberty-Ellis Island Foundation will allow entrance to all visitors—almost 4½ million a year. (The original museum was so small that only about 20 percent managed to get in.) 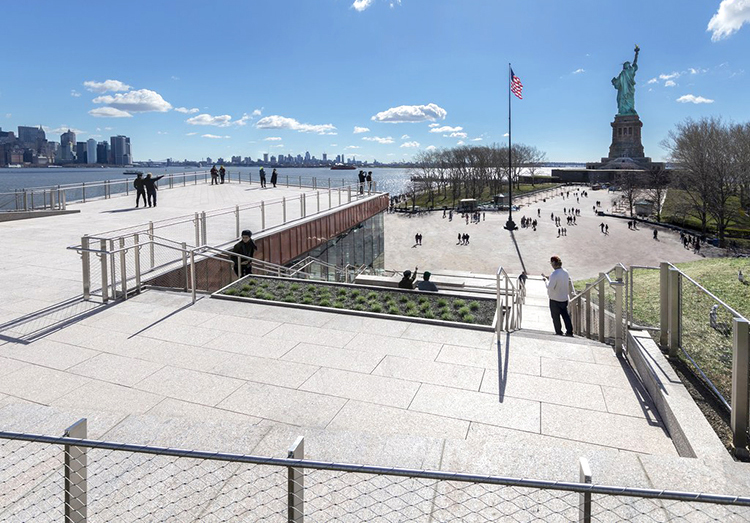 Despite its size, the building is an extension of the landscape, rather than an intrusion. “Think of it as a garden pavilion with a museum tucked underneath it,” says Nicholas Garrison, partner and project designer for FXCollaborative, who drew inspiration for the design from a 1939 plan by the National Park Service based on French formal gardens. Indeed, everything about the museum refers to the Statue of Liberty and its surroundings: Materials used in the Statue of Liberty and its pedestal were also used in constructing the museum: “Stony Creek” granite, copper-zinc alloy, and plaster. The park extends up from the island’s circular plaza to the museum’s green roof; wide stairs offer an informal seating area; at the top, the roof terrace affords a grand view of the statue and harbor. 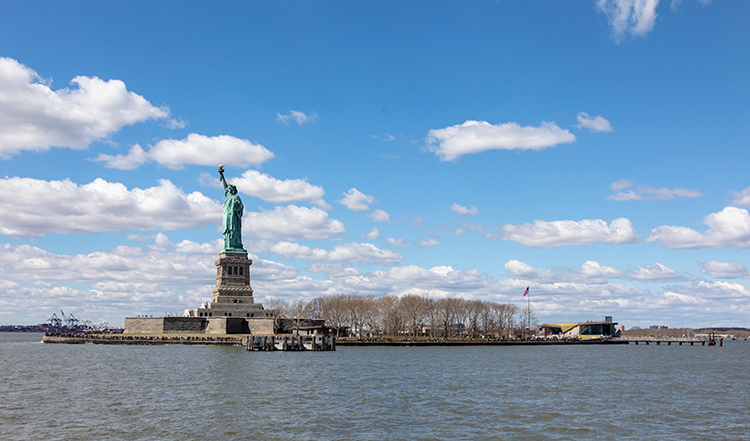 Approaching the island by ferry, the museum is almost invisible: the concrete exterior walls are vertically striated, referencing the nearby Palisades. (Even in this, there is a history lesson: the Lenni Lanape tribe called the Palisades Weehawken, meaning “rocks that look like rows of trees.”) Planted with native grasses, the green roof covers about half of the museum and is, says Garrison, “the a-ha moment.” Daniel Piselli, FXCollaborative’s director of sustainability, explains that a rain garden behind the museum will control storm water runoff, naturally filtering the rain. Indeed, the entire project is “a story of sustainability,” as Piselli says: Set above 500-year flood levels, the museum is built to withstand hurricane-force winds. Just in case things get really bad and the harbor waters rise above 19 feet, the first 10 feet of the museum base is hollow, with 84 narrow horizontal slots flood openings. That way, Piselli explains, water can come in—and flow out. 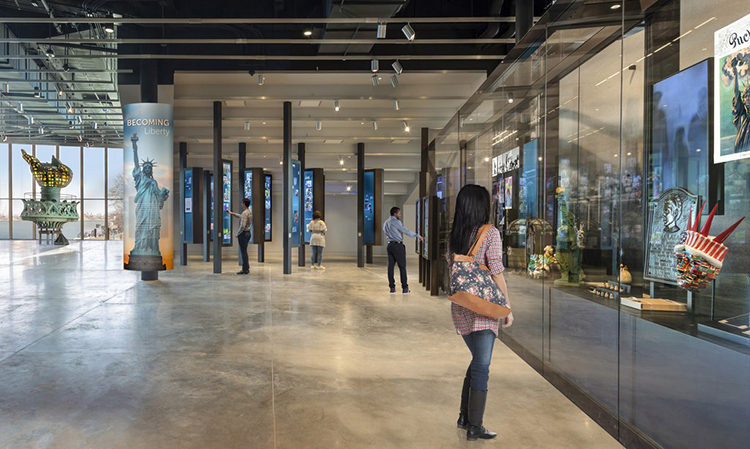 Inside the museum, visitors take a journey that at once informs and engages. “We’ve set it up so that visitors can proceed at their own pace, choosing their own experience,” said Edwin Schlossberg, principal designer of ESI Design. Pace is an important part of the museum. Even in winter, there will be no place for coats: The temperature of the museum will be turned down, so visitors will be comfortable with their coats on.

Soon after entering, you can join a filmic trip in the museum’s immersive theater, divided into three sections each with a 420 square foot screen and speakers in the walls and floor. First, the history of the Statue of Liberty; next, the construction, with a drone shot flying all the way up the interior of the statue. (To be able to show the true scale of the statue, explained Emily Webster, ESI’s head of media architecture, the second theater section was raised to 20 feet.) Finally, a glimpse of the myriad ways people throughout the world respond.

The concept of a multi-faceted, multi-generational, multi-cultural view of liberty guided much of the content of the museum: “It’s not just looking backward,” said Webster. “What does liberty mean to you? What does it mean in New York and elsewhere in the diaspora?” Banners hang from the ceiling, featuring archival images: Washington Crossing the Delaware, paired with the word “revolution”; “suffrage” linked with one of the first African-Americans to vote, Delacroix’s “Liberty Leading the People” paired with the word “dissent.” Below, artifacts, including writings by Edouard de Laboulaye, an abolitionist and leading instigator behind the idea of the Statue of Liberty as France’s gift to the U.S. “These are complex times,” said Edwin Schlossberg of ESI. “They demand complex responses.” 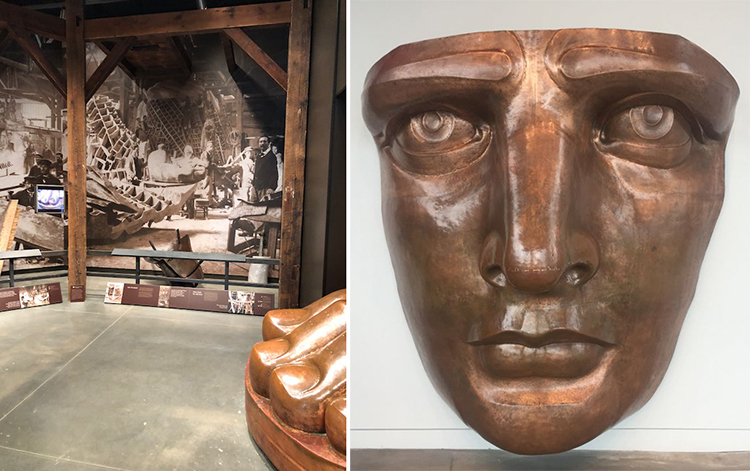 One of the most exciting sections is the reconstruction of Bartholdi’s Parisian workshop (circa 1884), complete with super graphics of the studio and soundscape, as well as sculpting equipment that made the foot (yes, there’s a full-size replica). Gustav Eiffel, who later went on to design the Eiffel Tower, made the structure of curvilinear bars of iron, so that copper, the thickness of two pennies, could be mounted on them.

There are scores of artifacts: Bartholdi was as dedicated a fundraiser, as he was a sculptor. In France, he raised money by selling tickets to his workshop, erecting sections of the statue and charging admission—he even licensed the statue’s image to wine and champagne merchants. In the U.S., when the American Committee failed to raise enough funds for the pedestal, Joseph Pulitzer—himself an immigrant—stepped up and “initiated the first crowd-funding campaign,” said Webster, by running a story in the New York World, urging the public to donate. He raised over $100,000 and sold a lot of newspapers. The public imagination was fired up by the Statue of Liberty: On a rainy day, one million people celebrated its opening with the first ticker-tape parade.

Aware of current public sentiment, the museum also offers what Webster calls “a big selfie moment”: In one of several kiosks, take a picture of yourself and choose up to seven images that best represent your idea of liberty. Once submitted, your choices and photo will be displayed that day along with all the other visitors. 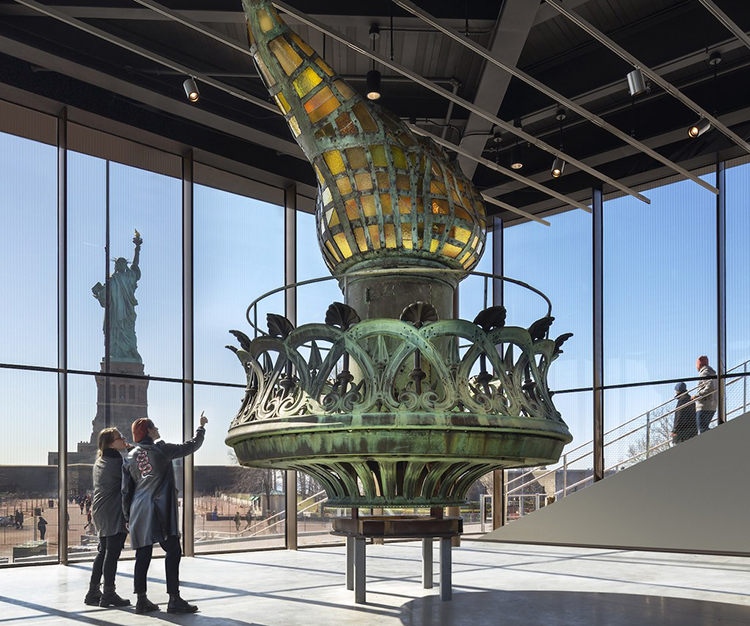 The final gallery is the most compelling: Looking out at Lady Liberty, the soaring space is softly lit by the original torch—16 feet tall and 3,600 pounds. Over the years, it had been modified; glass and lights had been installed it so that it could act as a light house. After years of disuse because of leaks, it was taken down during restoration in 1986, and replaced with a torch conforming to the original design.

In an age when climate change is making headlines, the building represents the best of current design: With the green roof’s impressive retention of rainwater, natural lighting and other design elements, designers hope the building will obtain a LEED Gold designation. Although views from inside the museum are expansive, only about a quarter of the building is clad in non-reflective glass. This was key to the project: In the 1890s, the Linnean Society’s Journal that recorded hundreds of “migrating birds attracted to rays of light from the Statue of Liberty.” Later, others suggested deaths in the thousands. 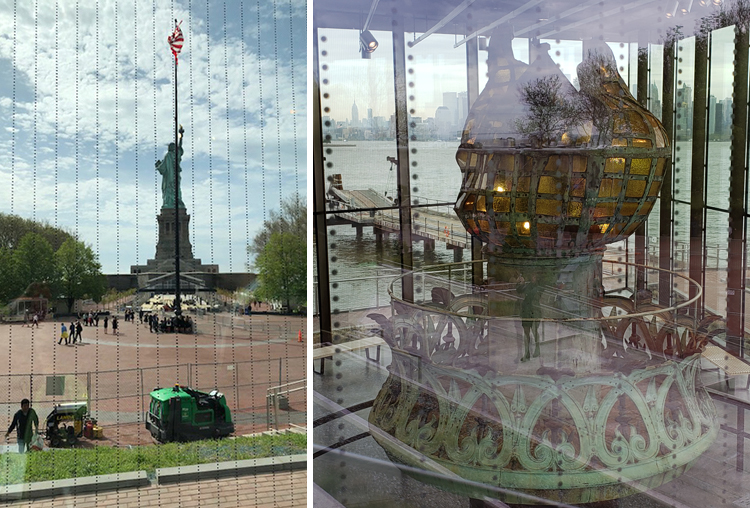 After many tests, FXCollaborative architects decided to create an original design of fritted non-reflective insulating glass for the museum, with the ceramic print pattern on an interior surface. “We did our homework,” says Piselli. The result: a bird-friendly pattern of gray ceramic 1/8″ dots, spaced at 3/8″ inches, running in vertical lines, which are spaced 1 3/4″ apart. The pattern cuts the sky’s reflection and is compact enough that birds won’t try to fly through the 22-foot-high glass walls.