Coming to your local bookstore, soon! Britain’s beloved literary musicians. Be prepared to laugh, perhaps cry—and engage in the musical life of fiction, ranging from Shakespeare to the latest best-seller. 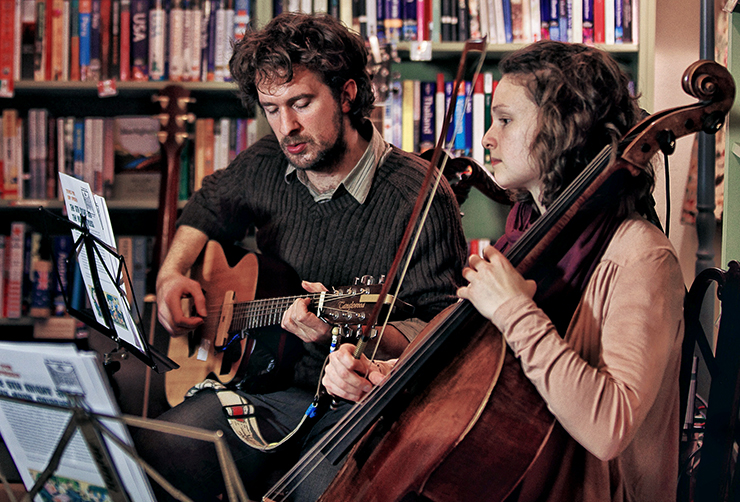 It’s not so unusual for musicians to be inspired by books: Joni Mitchell, for instance, wrote “Both Sides, Now” on an airplane while reading Saul Bellows’ Henderson and the Rain King. Bob Dylan wrote his powerful protest song “Hurricane” in response to the boxer’s autobiography (and raised $100,000 for Carter’s defense). Woody Guthrie’s “The Ballad of Tom Joad” is an ode to the central figure in The Grapes of Wrath.

For all that, only one band—appropriately named The Bookshop Band—composes and performs songs inspired solely on books. The band—hailed as “a quintessential British institution”—headlines in bookstores and libraries throughout Europe and the UK. Inspired by authors from Shakespeare to Philip Pullman, the musical duo Ben Please and Beth Porter have written hundreds of songs, with The Guardian featuring podcasts of their songs.

This month, The Bookshop Band kicks off its American debut with several gigs in the New York City area, including Book Culture’s new Long Island store and the New York Public Library’s 53rd Street Library on January 19 before heading out to other parts of the US. Two and a half weeks later, they’ll bring their original songs to WORD Bookstore in Brooklyn before winging it to Scotland.

It all started in 2010 thanks to Nicholas Bottomley, co-propietor of Mr. B’s Emporium of Reading Delights, in Bath—hailed by The Guardian as one of the top ten bookshops in the world. “[We] wanted to add new life to our author events,” says Nic, a finance lawyer who along with his wife (another disaffected lawyer) decided to ditch the corporate scene to become independent booksellers. “We had the idea of adding music and I spoke with Ben Please, who was a customer and whose talents as a musician I knew very well.“

Ben recruited Poppy Pitt and Beth Porter, a cellist who worked with Peter Gabriel, Petula Clark, Newton Faulkner and other big names in pop and folk. At first, the group played and sang songs that complemented theme of the evening. Ben recalls that when “the bookshop asked us to come back for the second season, we doubled our price to two glasses of wine, each,” and started basing their work on books. The theme of the first event, he recalls, was “Adultery Night,” focused on The Paris Wife, Paula McLain’s fictional biography of Ernest Hemingway and his first wife. “We were a bit stumped. We obviously couldn’t draw from our own experiences, so instead we turned directly to the book for the first time.

“We came out of that process feeling like we could write something from a perspective that we had never been able to before…. It went down so wonderfully, with the audience, the bookshop owners and the author, that we haven’t looked back since.”

The process is direct, and sometimes lightening fast: After reading the books of a guest author, The Bookshop Band writes one or two songs per book, explains Nic, and debut the songs “in front of the author and our audience, just before the author interview.

“The results were incredible—not just musically but in the vibe it created at the event and often in the over-awed reactions of the authors. There were plenty of tears and much love for these crazy talented musicians providing beautiful musical interpretations of certain aspects of the novels and memoirs.”

Eventually Ben and Beth married and moved to Wigtown, Scotland’s “national book town.” Though they’re still Mr B’s “house band” (Ben says most of the songs they write are from a book list curated by Mr B’s) their audience has blossomed: they’ve released 13 albums and commissions flow in from arts institutions, authors, shops throughout the UK and EU, even publishers. The V&A signed them on to write songs in celebration of Shakespeare’s 450th birthday and also for a collection of banned books—“a lot of fun,” says Ben. The Bookshop Band also appeared at the Pompidou Centre in Paris, singing compositions inspired by Beat poets’ books, like Jack Kerouac’s Big Sur and Howl by Allen Ginsberg. (Eat your heart out, City Lights!)

New York, however, was only a pipe dream until a book reviewer, Dwight Garner, took a week’s holiday running Open Book, an AirBnB bookstore in Wigtown. (Yes, really!) They all met at a dinner hosted by Shaun Bythell, the author of Diary of a Bookseller, and owner of the largest second-hand bookshop in Scotland, appropriately called The Bookshop.

Just back from tour, Ben and Beth offered to perform a little pop-up concert in the bookshop “to help sooth his hangover acquired the night before.”

In The New York Times, Garner fondly recalled the impromptu concert: “They had musical instruments in tow. Beth, a cello; Ben, a ukulele; [their daughter] Molly, a toy glockenspiel….The Bookshop Band is not just good but achingly good. If America’s independent booksellers can’t figure a way to get [them] to tour, they’re doing something wrong.”

Soon, the American Booksellers’ Association accepted the challenge and invited the band to perform at their annual conference for independent booksellers. A music and books wholesaler offered to pay for most of the costs of the tour. Result: The Bookshop Band will be playing over 20 shows in 21 days. Giving a nod to British stereotypes, Ben quips, “We’re hoping to print the tour poster on tea towels.”

What will The Bookshop Band be playing for Americans? With a repertoire of songs based on over 100 different books, they’ve got plenty to choose from. “We’ll play some faves,” says Ben, “including songs inspired by Alice in Wonderland, a song using the first lines of famous books, and a couple of songs inspired by Philip Pullman’s new The Book Of Dust series.”

He adds: “There will certainly be a few woo-ing stories, possibly a ghostly tale, a smattering of historical fiction, a touch of crime, a dose of magic and science fiction…. We’ll also bring one or two songs curated by The V&A Museum in London, including some Shakespeare-inspired material.”

No two concerts will be exactly alike. “We try and take people on various journeys through our set. We don’t expect anyone to have read all the books beforehand; we’ll hold them up and say a little about each and how they inspired the song, not enough to give anything away, but just enough to draw people into the story.”

Most of the featured books are contemporary novels, and so, like them, the songs inevitably reflecting the current social and political environments. One song is inspired by an anthology of women’s poems written in response to the #MeToo movement. (You can read Beth Porter’s blog here about the process of writing that song.)

Book-loving audiences inevitably participate; the band always asks for recommendations of books ripe for songs. “We hope not only to discover a host of American classics, but also what’s forming the current Zeitgeist of opinion and social relevance, reflecting the recent social movements and political landscape.” Ben is particularly looking forward to their gig at the Tattered Cover in Denver: “Michelle Obama recently did a book event there, and it’s very exciting for us to be following her.” (In the UK, booksellers hailed the former first lady’s memoir Becoming as “the most valuable title of the year,” selling over a half million copies in less than two months. See story in the The Guardian here.)

Just before packing, Ben had a special note for New Yorkers: Since he and Beth have just received their working visas, the “logistics of the tour are a little behind in planning (accommodation, babysitters for Molly etc…). So if anyone sees a trio of troubadours wandering the streets of New York in mid January, one with a cello on her back, one with a guitar and one about two feet high, dressed as a bunny and carrying a toy glockenspiel, you’ll know we didn’t quite get round to sorting our accommodation that night. But all the concerts are booked and we’re really excited to be finally coming.”