The audience is in for a shakeup seeing this powerful, riveting, all-engaging play about that feminist icon and legend in her own time, Gloria Steinem, and how she’s advanced women’s rights. 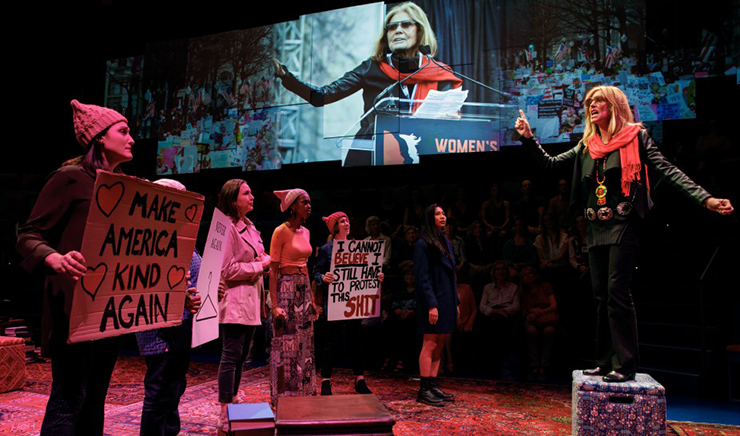 The cast of  Gloria: A Life by Emily Mann, directed by Diane Paulus, at the Daryl Roth Theatre. Shown below, Christine Lahti and Fedna Jacquet as Gloria Steinem and Dorothy Pitman Hughes. All photos by Joan Marcus.
. . . . . . . . . . . .

The most inspiring play in New York has to be the one about an 84-year-old woman who has always had a knack for making history—and is still making history today. The play, like the feminist pioneer herself, is an original in our intersectional era, as we become more aware of the ways in which different forms of discrimination, based on such categories as race, gender, age, religion, and sexual orientation, combine, and more aware of the ways by which Gloria Steinem sought to overcome them. Gloria: A Life touches on the multiple high points of Steinem’s committed life.

The very structure of the play is itself revolutionary, with Act Two asking the audience to offer a new way to look at the present while harkening back to the past. Gloria had its prescient beginning some three years ago, after Steinem and her actor friend Kathy Najimy called the multi-award-winning producer Daryl Roth with their idea for the play.

The three had what, Daryl told me during a phone conversation I had initiated with her, was a “wonderful” meeting. Not only had she produced (and won multiple awards for) many plays featuring women’s issues, she was on the board of Lincoln Center Theatre and workshopped the production there with writer Emily Mann and director Diane Paulus (both Tony award winners), all three of them saw the importance of a play portraying the journey of a woman who fought to end the male and white power balance in our country. 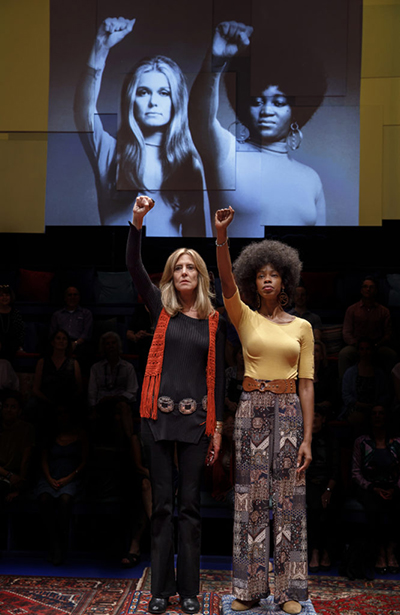 We who have followed Steinem for the past fifty years know that women have come a long way since then she started out. When she co-founded Ms. Magazine in 1971 whose early issues I was fortunate enough to write for, a woman was not able to apply for credit, keep her job if she was pregnant, or refuse to have sex with her husband. It took so long for so many women to report sexual harassment in the workplace, partly because back then there was no manageable mechanism for reporting it.

The reason so much of this is history is because of our foremothers like Steinem and other women featured in the play, including Wilma Mankiller, the first female Principal Chief of the Cherokee Nation; African American lawyer Florynce Kennedy, who sued Columbia Law School to gain admission; feminist lawyer Bella Abzug, who introduced the first federal gay rights bill, and others of disparate backgrounds.

We now have more women in Congress than ever before, and they represent greater diversity, with 39 women of color, including New York’s own Alexandria Ocasio-Cortez and 38 other African American, Latina, Asian-American women, and two hijab-wearing Muslims.

Even the very birth of this play embodies Steinem’s belief in women’s working together to accomplish great things, as Roth, Mann, Paulus, and Steinem decided which of the many stories in Steinem’s crowded activist life they should include. She has told many of them in her books, especially her most recent one, My Life on the Road.

Initially Gloria: A Life was going to be a one-woman play based on the life of this remarkable woman who, from her activist beginnings as a high school student, has accomplished so much. But with her characteristic modesty, Steinem said that having the play be all about her took her out of her comfort zone. In her many speeches on campuses and to other audiences, Steinem has consistently taken pains to share the podium with someone else, usually a woman of another racial or ethnic group.

The play, then, would back her up with a six-woman cast who would represent various women and men who would advance—or try to retard—feminism over the years. But who would play Steinem? Award-winning actor Christine Lahti, Steinem’s good friend and the author of True Stories from an Unreliable Eyewitness: A Feminist Coming of Age, stepped forward, and seeing her onstage with her long hair, aviator glasses and bell bottom pants like the ones most of us wore in the 1970s, when Steinem burst into the public spotlight, you think you’re seeing the feminist icon herself.

Starting January 29, the role of Gloria is now being played by Patricia Kalember, whose impressive career includes hit shows Orange is the New Black, The Blacklist, Veep, and Madam Secretary. She has also been seen in such popular shows as Sisters, Law and Order: Special Victims Unit, and thirtysomething. As soon as she steps onstage, she too magically turns into Gloria.

The first act of “Gloria” follows the trajectory of Steinem’s life story: the girl who grew up in Toledo, Ohio and then came to New York as a high school student to live with her sister and campaign for Adlai Stevenson. There’s her early career in journalism, including the undercover Playboy Bunny stint she took on so she could write an article about the demands of the role; her help from a feminist therapist; her guilt about her emotionally fragile mother; and her rebuttal against people calling her a man-hater. “I always had a man in my life,” she told us, but she didn’t feel the need to marry until she was 66, and then was happily wed for three years until her husband died of brain lymphoma.

Introducing Act Two, the onstage “Gloria” acknowledges the emotionality of the play and then invites the audience to move from Steinem’s life to the lives of those of us in the audience. We then take part in what can be thought of as a traditional Native American “talking circle”—or a journey back into consciousness-raising like the kind I took part in during the late 1960s and ’70s. The physical features of the circular theater help establish this kind of comfort, with its brightly hued carpets on both floor and seats.

During Act Two of the performance I attended, one audience member told us about the New York Abortion Access Fund, an organization that raises money for women who don’t have the means to travel for a legal abortion—and I learned that many women who live right here in New York need to go to other states. An older man happily told us he was celebrating his birthday by coming to the play. My daughter, journalist Dorri Olds, bravely spoke about the book she’s writing for women and girls who, like her, are survivors of sexual assault. (See NYCitywoman’s Raped at 13 and Too Ashamed to Tell) She was later surrounded by women who expressed encouragement, including a therapist and a social worker.

Often Act Two features a special guest. At one presentation, the founders of CyclesandSex.com, spoke about their educational and support program, covering the entire reproductive system. A special guest at another presentation was Kathrine Spitzer (See Women Running Away With the Sport), the first woman to run the Boston Marathon.

This play may be especially meaningful for young women and men, as they learn about Steinem’s early activism. If you have a young man or woman in your life, take them to see it. If not, take yourself, and if you can, become what Steinem calls herself, a “hope-a-holic,” by sponsoring a group of 30 students to see the play. To become a sponsor, contact Daryl Roth Productions at 212-957-1222 or by email at Christopher@RothProductions.com. The play runs through March 31 at the Daryl Roth Theater and then may travel to other cities.

Ten Books for Us to Read Now