Crossing the Hudson to Reclaim the Nation

Outraged by Trump’s policies and attacks on civilized debate, New Yorkers are knocking on doors in New Jersey, hoping to flip the House. 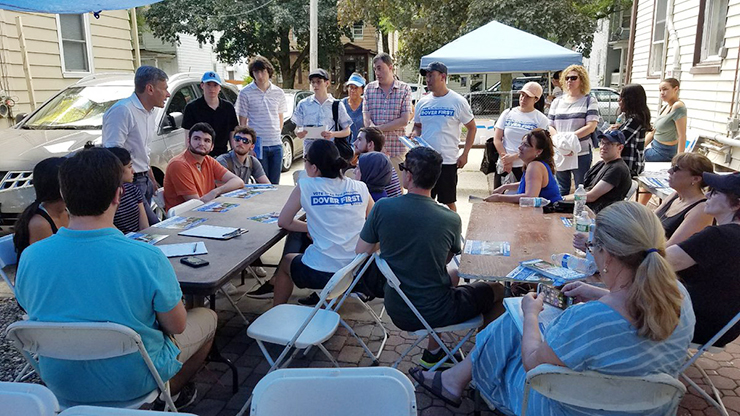 I arrived at the Summit, N.J., field office of Tom Malinowski’s congressional campaign with plenty of time to spare—but the room was already packed and I just managed to squeeze into a space against a wall. There I could listen to the candidate—assistant secretary of state for human rights under Obama—give an inspiring speech about his plans to check President Trump’s policies on health care, the environment, taxes, and how we could make that possible by getting out the vote. Midterms, he said, are about saving the U.S.

As his staff started handing out canvassing maps, asking us to pair up for the day’s knocking on doors, the man next to me turned and said: “I’m a New Yorker. I don’t know my way around here, do you?” I laughed and said I too was a New Yorker—at which time a half-dozen other Manhattan residents came over.

And that was just the beginning. The following weekend, I took the hour-long train ride to New Jersey and, as I got off, was surprised to find dozens of people wearing the canvassing outfit: layered clothes, a bag carrying water and snacks, and comfortable shoes. “Anyone here going to Malinowski’s office?” I asked. “Yes!” came answers from all directions. “Where is it?” “Follow me,” I called, having been there just the Saturday before. We swarmed out of the station and into the street en masse, an autumnal political marching band hoping for their team’s victory.

Why are droves of New Yorkers crossing the Hudson to campaign for Democrats running in New Jersey? Don Pickett, a New Yorker who been heading out to New Jersey since March 2017, explained: “We’re surrounded by swing [congressional] districts. Across the Hudson in New Jersey we’ve got NJ-5, NJ-7 and NJ-11, which are all clustered together. In NYC we’ve got NY-11, which is in southern Brooklyn, and Staten Island, NY-3, which is eastern Queens and the north shore of Long Island, and NY-1, which is the eastern end of Long Island.

“I live in one of the safest blue districts in the country,” he added, “so Swing Left was perfect for me.” Started after Trump’s election, Swing Left has identified 84 House seats that are competitive. “To get a say in our government,” the website claims, “we need to win back at least 23 of them.” I signed up online, and then looked for events and ways to get involved.

I chose to campaign in NJ-7 for several reasons:

1. I wanted a good candidate and Tom Malinowski—who immigrated from Poland when he was six—is one. He has harshly criticized the President’s treatment of immigrants and Trump’s coziness with Russia. He has called out Rep. Leonard Lance’s support of Trump, his monetary ties with the Koch brothers and his failure to block Trump’s policies that hurt New Jerseyites. He is diplomatic and has a good sense of humor.

2. I wanted to volunteer in a congressional district where a Democrat had a good chance of unseating a Republican. NJ-7 fits the bill: It’s considered a top battleground in the nation; Trump’s approval rating is 39 percent, among the lowest in “Republican” districts, with 55 percent disapproving. Hillary won here.

3. Added bonus: Short Hills, where I grew up, is in the congressional district. NJ-7 is a crazy district stretching from Short Hills, just 19 miles from the city, past Trump’s private Bedminster golf club, all the way west to the Delaware Water Gap. The gerrymandering was the Republicans’ attempt to create a safe haven, stringing wealthy Republican towns and villages together (five of Forbes magazine’s top billionaires live here). And, it worked: The district has sent a Republican to Congress for 37 years. 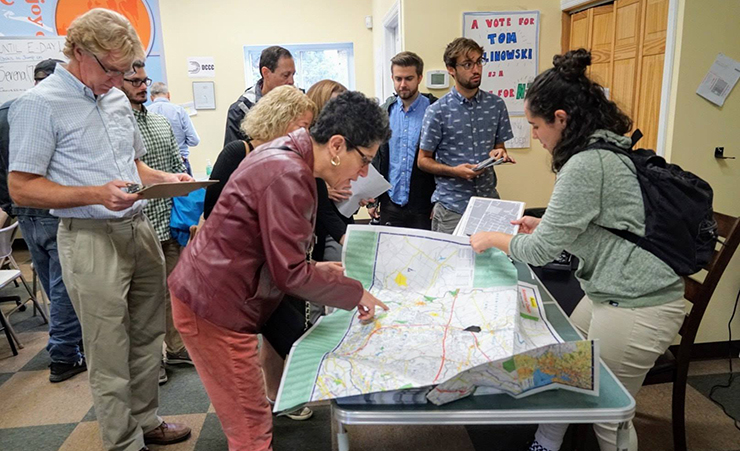 Now hundreds of volunteers are determined to flip the district, putting in over 20,000 hours since June in NJ-7 alone. Energized by knowledge that a few hundred votes might make the difference, volunteering has become for some the highlight of the week: “I can’t wait,” said one. “I feel that I have a chance to change the course of the nation.”

The more I canvassed, the more New Yorkers I met. Some, like writer-performer Hope Singsen and Don Pickett—now district leader of Swing Left NYC for NJ-7—have been working on the campaign since Trump’s election, recruiting more and more New Yorkers, via Swing Left, and making it easier to cross the Hudson and volunteer. Charles Morgan and Jeanette MacDonald—executives who live in the East 30s—have been driving to New Jersey since last spring to canvass—and taking lucky volunteers with them.

One delight of volunteering is meeting others. On a ride home with Charles and Jeanette, I met Jason Jacobs, a theater director and teacher, and David Derbyshire, a designer. In midsummer Jason decided to “adopt a district” and, via Swing Left, he “hit the button” and connected with an Upper West Sider driving out. “Swing Left made it so easy by giving us the steps—how to go, where to go, what the issues are.” Technology has evolved incredibly, so now—just by downloading the canvassing app MiniVAN to your cell phone, you know who you’re talking to, and can add their responses. “By the end of the day, there’s a real rhythm,” says Charles.

“I’ve never felt as called upon—that action was necessary—as I do now,” says Jason. “Bush and Iraq? No one’s going to pay attention. But after Trump was elected, the rules changed. We have to get involved.” Adjoa Aboagye, a professor of psychology at City University, has similar sentiments. As members of Generation X most of her friends didn’t talk about politics and many didn’t vote. Then, Trump was elected. “I participated in the Women’s March, that made me feel better—I wasn’t alone. But protesting wasn’t enough—I wanted to do something concrete.”

Adjoa’s first canvass, in March 2017, involved, as she describes it, “deep listening: What were the main issues that concerned people?” In May, she and other volunteers got New Jersey Democrats to complete “pledge to vote” postcards—another Swing Left initiative, aimed at making them more likely to go to polls. (Midterm turnout is typically low.) Since then, Adjoa has been volunteering constantly: canvassing, phone banking and rallying the troops. “I barely have a social life.” But she knows New Jersey Transit!

Despite the hassles of canvassing there are benefits: “I do it to deal with my own anxiety,” says Adjoa. “Human intervention helps me to be more open.” She recalls walking down a driveway and seeing a pick-up truck with a gun rack parked in front of a log cabin with a human target on the door. “It was the only time I didn’t knock.” Adjoa was about to leave a flyer, and turned to find the owner walking toward her. They started talking, and to her surprise, he seemed moderate, “a man who was worried about the country. He took the flyer, saying, ‘I’ll think about it. God bless you for doing this.’”

Canvassing offers an insight into other lives, a chance to reflect how lucky we are: While knocking on apartment doors just blocks from my old high school, I met a woman who said she hadn’t had time yet to think about the election. When I asked her why, she became teary and said she had dual citizenship and would be driving to New York to cast her ballot for the Brazilian president at the consulate the next day: But there were no good choices. We talked a while, I gave her the pamphlet about Malinowski. She looked at it and, wiping away her tears, promised to vote. A block away, a man opened the door; when I mentioned Malinowski, he called out in Spanish. Five members of his family appeared: All said they were voting for Malinowski and were determined to get their friends to do the same.

The more I canvassed, the more friends I made. Just talking about it was heartening: At the reception for SVA’s vividly political exhibition, Art as Witness, I mentioned to Steve Broder—the artist/curator of the exhibition—that I’d seen a lot of political signs in New Jersey while campaigning for Malinowski. “You have to meet Susan!” he said, and guided me through the throng of artists to Susan Blubaugh, who has been working almost round the clock on the campaign. At a recent luncheon featuring A.O. Sulzberger Jr. I told a colleague that I was heading out on the weekend to New Jersey to try to flip a congressional seat. He immediately offered to drive me and his wife there.

Perhaps the most amazing connection occurred on a Sunday night drive from western New Jersey with Charles and Jeanette. A young couple who’d just done their first-ever canvassing were sitting in the back seat with me, comparing notes about how many people had responded positively, joking about the divided households (she, pro-Malinowski, he, arms akimbo, not). I mentioned that I’d first come in contact with Malinowski in Indonesia, where a friend worked for Human Rights Watch. The young woman leaned forward to ask how that happened, and I explained that I had lived in Indonesia in the 1980’s, thanks to a visa I’d gotten after meeting the foreign minister through some stories I wrote for The New York Times. Who was he? she asked. “Mochtar Kusumaatmadja.” I replied. She laughed and said: “He’s my grandfather!” and immediately texted her mother to let her know of our meeting.

We’re going to get together and have dinner—in celebration, we hope, of the election of Tom Malinowski and a blue wave big enough to take back the House—and the start of the fight to reclaim our democracy.

Swing Left’s purpose: Get volunteers out of safe, blue districts and into red districts where their time and energy can help flip the House. All of us living in Manhattan fit the description. As Don Pickett, Swing Left’s Regional Organizing Coordinator for several New York and New Jersey congressional districts, notes: “There are Democrats all around us who feel outnumbered and out-organized, and this is our chance to show them they’re not alone, and to make sure all our votes count.”

Volunteers can get involved at whatever level they find comfortable. Canvass, phone bank, call from home, or fund raise—you’ll find thousands of others who are jumping into the grass roots ocean for the first time. To get involved now, go to: Swing Left | Take Action. “We all share ideas and strategies, so no one needs any experience before jumping in, because most of us had never done anything like this before, either,” adds Pickett.

Swing Left and other progressive groups are also making a concerted effort to boost Democratic turnout called “The Last Weekend.” The aim: to get as many people volunteering in the important days leading up to election day. So sign up for any or all of the days preceding the election on Nov. 8—and help make history.