As temperatures rise, City of Water Day gives New Yorkers a chance to get cool at dozens of events in-, on- and near the water—and learn some maritime history as well! 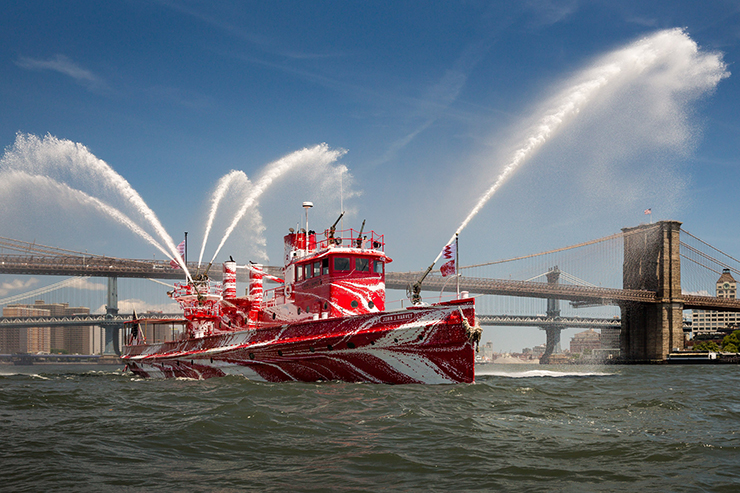 Ever since Henry Hudson went up river in 1609, the island of Manhattan has been one of the world’s most important harbors. In the early days of sail, it won out over Philadelphia, because—thanks to its topography—captains could be sure they have wind to sail in and out of the harbor at all times of the year.

Every July, City of Water Day offers an opportunity for the people of New York and New Jersey to reconnect with the importance of our waterways through a variety of in-, on- and near-the-water activities, including free boat tours.

“City of Water Day recreates the energy of New York’s original Street of Ships, the two miles of lower Manhattan’s East River waterfront once crowded with the tall ships, whose immigrants and cargoes helped build the city we enjoy today,” said Captain Maggie Flanagan, director of education and outreach for Waterfront Alliance, the non-profit that has organized the celebration for the past 11 years.

Although the port has consistently been an important part of the city’s economic life, for many years most residents avoided the waterfront and its busy docks. Indeed, Fifth Avenue became the exclusive place to live because of its distance from the waterfront.

In recent years, New Yorkers have begun to return to the waterfront, but because of commerce and development, access to the water has been limited: “More than half of waterfront districts in New York City…have only one, or worse, no places for people to touch the water,” says Roland Lewis, president of Waterfront Alliance. The waterfront is an important public resource; City of Water Day spur people’s interest, ensuring “safe, accessible, healthy and resilient waterfronts for all.”

In the past decade, New York’s waterfront has evolved from a rough and largely inaccessible part of the city to a stunning attraction. Bike and walk paths, leading to new parks, line the Manhattan and Brooklyn coastlines. Thanks to major initiatives the rivers are cleaner. And the ships that ply the waters are once again eye catching.

Certainly that’s the case of the Fireboat John J. Harvey. Launched in 1931, the ship was retired in 1994, only to come back to rescue people in Lower Manhattan on 9/11. This year, the fireboat has become a floating work of art. Commissioned by Public Art Fund and Britain’s 1418 NOW—a non-profit celebrating the centennial of the end of World War I—Brooklyn-based artist Tauba Auerbach used the John J. Harvey as her “canvas.” The result: Flow Separation, a contemporary rendition of “dazzle camouflage,” a painting technique used during World War I and later in World War II to make it hard for the Germans to track ally ships. (Pablo Picasso called the dazzle ships “a cubist invention.”)

Last month, a team of 21 artists (18 of them women) worked 18-hour days hand-painting the entire ship in a red-and-white marbled design that resembles a dream of wake patterns. On City of Water Day (and on specific days throughout the summer) the public will have a chance to board the John J. Harvey; those lucky enough to score a trip will sail past the Brooklyn Navy Yards where, over a century ago, avant guard painters “dazzled” hundreds of navy vessels before they went to war. 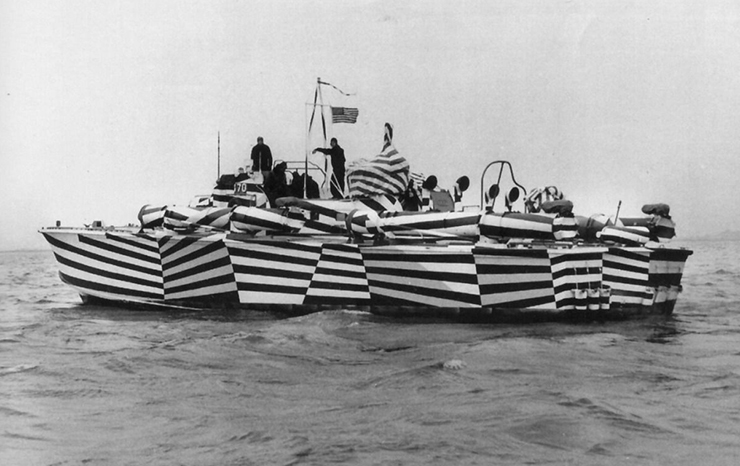 Other boats will also be offering tours that will vary in destination, including trips to the Statue of Liberty, sails across the harbor, and a historical cruise to Newtown Creek. New York Waterway—the city’s much-lauded new ferry boat company—will run tours from Pier 11; Hornblower Cruises will take off from Pier 15, and the Circle Line and South Street Seaport Museum’s schooner Pioneer can be boarded on Pier 16.

Smaller boats are part of the festive armada—in all there are 57 events. New Yorkers can paddle kayaks, fish, and watch teams compete in a cardboard kayak race. You can go out with instructors for a free sail at Inwood’s Dyckman Marina or take a try paddling the Hudson Outrigger Canoe. On Governor’s Island, visitors can harvest lavender or join New York City Audubon on a bird walk, viewing Common Terns nesting on the piers. There will also be events in honor of the bicentennial of the building of the Erie Canal—which impacted not only the business of the city, but also who came here to live and work here. Check here for an event near you. 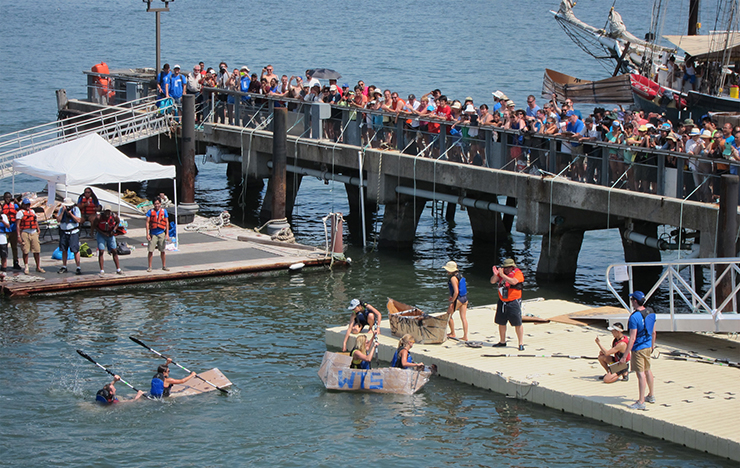 It’s a day, says Captain Flanagan, that New Yorkers will be able to discover parts of the waterfront they’d never known and learn about the past and future of New York City’s maritime history. It’s also a time to revel in revisiting their favorites: For all the times she’s been on the water, and all the places she’s studied and seen, she still has a favorite: “I never tire of seeing the Statue of Liberty.”

To reserve a space on a free boat ride, go to Waterfront Alliance’s City of Water Day website: http://waterfrontalliance.org/what-we-do/city-of-water-day/activities/#portnyc-boat-tours

CAPTAIN FLANAGAN: ON THE WATERFRONT

Flanagan, who grew up on the South Shore of Long Island, was first introduced to sailing after college by her boyfriend. Eventually they broke up, but her fascination with the sea continued. Flanagan, who was working as a special education teacher in the city, started volunteering as crew for ships at the South Street Seaport Museum. It wasn’t long before she was hired as the educator for the museum, where she developed a program for kids, teaching them science history and seamanship on the 1885 schooner Pioneer. Flanagan says it was a perfect “3-D learning site”: A coastal cargo vessel for over 80 years, the Pioneer first delivered sand on the Delaware. She hauled cargoes timber and equipment for bulkheads in the 1960s, when the owner decided to quit. He donated it to the seaport: “He wanted to keep the ship sailing.”  Visit the website. 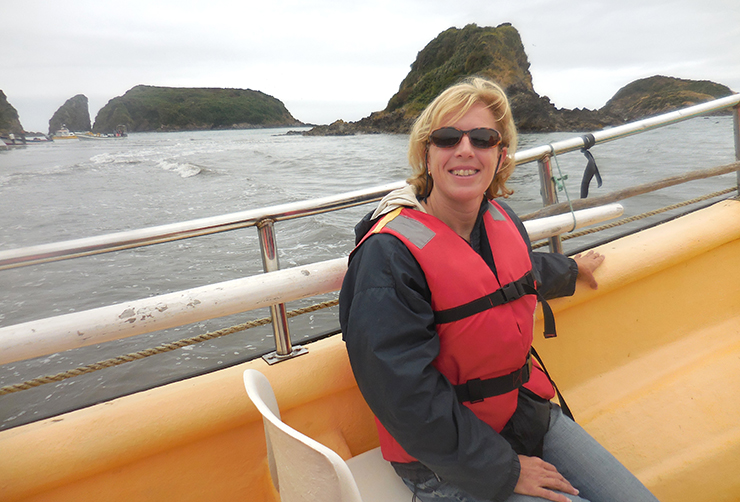 Hurricane Sandy devastated South Street Seaport, forcing it to close; Flanagan started working various sailing gigs, including tours as a mate for a local tour boat company, doing basic maintenance and interacting with passengers. Through her years on boats, she earned her captain’s license, but she missed the historical and educational pieces of her nautical experience. “Joining the team at Waterfront Alliance was a natural.”

In addition to City of Water Day and other festivals throughout the year, Waterfront Alliance runs programs that introduce students to their local waterfront. Through “Estuary Explorers” middle school students visit waterfront field labs, where they test water samples and get practical experience in marine science. (Once when leading a class off Bay Ridge flats, “we actually found a seahorse,” Flanagan recalls.) She’s also trained young women in the Urban Assembly New York Harbor School’s Vessel Operations Class who are studying to become the mariners of tomorrow.

“We’re constantly seeking to open public access to the waterfront—it’s critical to the life of our city, as a source of recreation and also so that children and others are made more aware of the environment.”

The work she and others at Waterfront Alliance do is part of a movement across the country to have people rethink the waterfront as a community resource and a natural resource, part of the city’s green infrastructure, while maintaining and strengthening the working waterfront.

“The biggest challenge is getting folks to realize that we the people own the water and waterfront.”

Clearly Maggie—who’s out on the water at least two times a week and knows just about everything there is to know about maritime New York—loves her job. So what does she do for vacation? “It’s a busman’s holiday,” she laughs: She has crewed on a ship in the Great Chesapeake Bay Schooner Race, sailed to Easter Island and up the Gulf of Alaska. All the time, she’s learning more about the sea and her profession as captains traditionally have—“through the hawse-hole.”
. . . . . . . . . . . .