New York City has long been famed for its skyline. Now, New Yorkers can be atop that skyline, thanks to Leslie Adatto and her search for the city’s best rooftops. 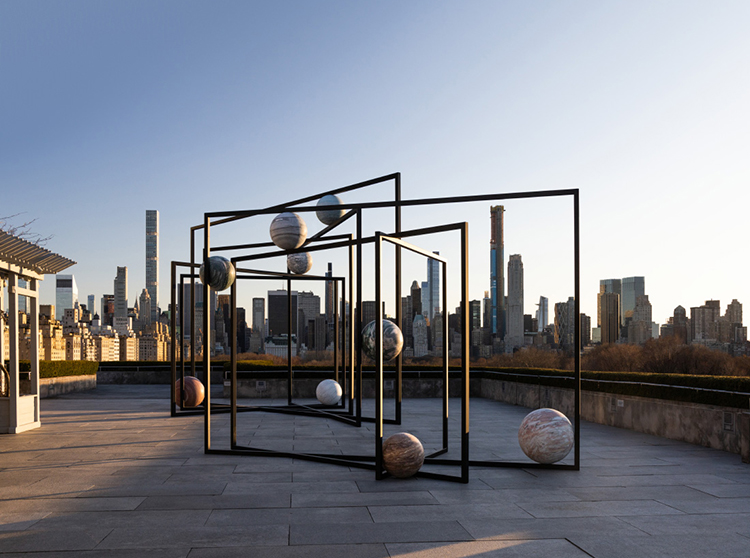 Just about every New Yorker has been to the top of the Empire State Building. But did you know that just six blocks to the west is the second largest green roof in the US? As Leslie Adatto notes in her foreword to 111 Rooftops in New York That You Must Not Miss, above the noise and grit of the street grid, “New York looks its absolute best.” What’s more, you can do just about anything up on the roof: swing in a hammock at a rooftop winery, swim above the Hudson River, even ice skate.

Adatto started tracking down the best roofs soon after she moved to New York from San Diego in 2010. “What drew me to New York was New Yorkers,” she said. “Whether it’s what they’re doing at their day jobs or after work, everyone seems to have a passion. Certainly no one is here because of the convenience!”

When she started thinking of what she could do in the city, Adatto focused on rooftops: “I always wondered what, when you were up there, it would be like looking down.” So she hopped on her bike; many miles later, her discoveries (111, she’s quick to point out, not all her finds) are detailed, complete with directions of how to get to them, in her illustrated guide just published by Emons Verlag.

We’ve asked this rooftop connoisseur to pick some of her favorites, first for food and drink, and then a group of unexpected pleasures. Here are some. Now all you need is to head on up! 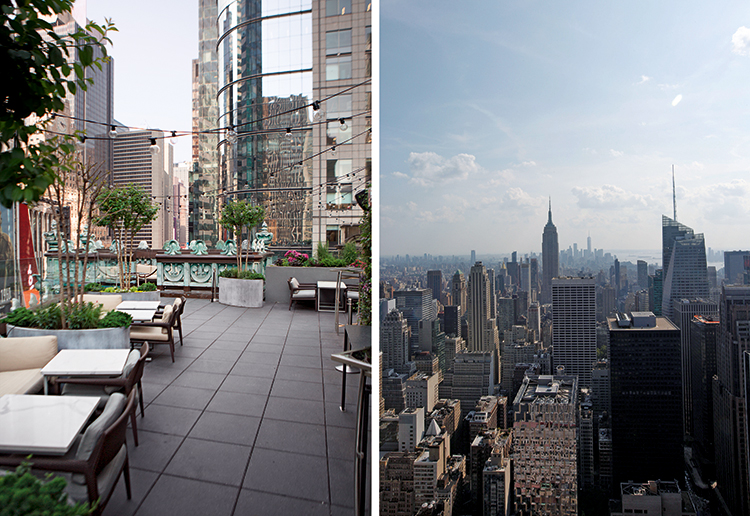 New Yorkers have long known that one of the best ways to end a day of toughing it through work and busy streets is to have a drink (or two) in some aerie oasis. John Jacob Astor IV knew this when he built the Knickerbocker Hotel in 1906 for his lavish parties. (Just six years later, the famed millionaire died on the Titanic.) Now, after a $250 million renovation, Adatto suggests enjoying vintage cocktails at St. Cloud, a 7,800 square foot indoor-outdoor bar, with a million-dollar view of Times Square.

Another updated landmark is Bar SixtyFive, just next to Rockefeller Center’s famed Rainbow Room. Since 1934 (a year after the end of Prohibition) patrons have sped up 65 stories in the Art Deco skyscraper, lured by cocktails and the panoramic views. Recently, Tony Bennett celebrated his 90th birthday here with friends, including Lady Gaga, who had just finished recording with him. 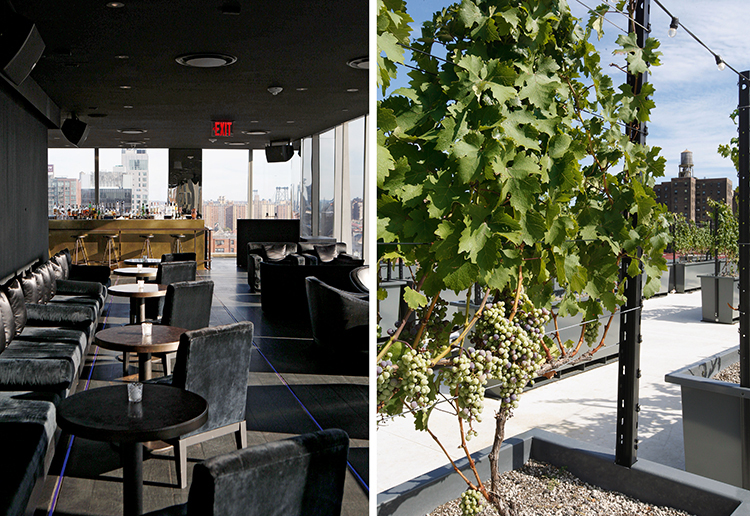 Ian Schrager, the man who created Studio 54 in the 1970s, is still at it. His latest venture is PUBLIC, a hotel on the Lower East Side. Head up to The Roof, on the 18th floor, where drinks are served at a bronze bar and stunning sunsets and 360-degree views of Manhattan are perfect backdrops to the large outdoor terrace. “Getting into The Roof is as competitive as Studio 54,” notes Adatto, but reservations are taken. And yes, there are DJ nights!

Brooklyn has some stellar spots as well: At Rooftop Reds, you can wander the vineyard atop a 15,000-square-foot roof in the Brooklyn Navy Yard and sample New York wines, while enjoying views of the Manhattan waterfront and, if you’d like, swinging in red hammocks. Adatto notes two caveats: Online reservations are required and “[w]ear comfy shoes”: the vineyard and tasting room are up 80 stair steps. 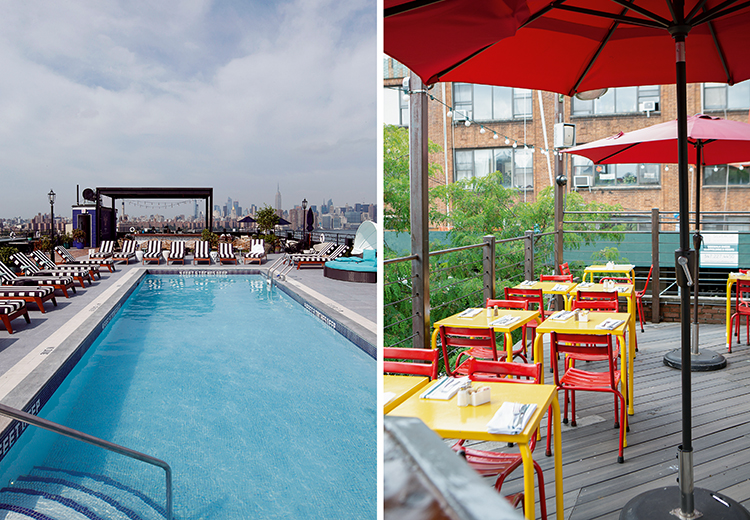 At the Williamsburg Hotel, you can enjoy drinks in the Water Tower Bar—an ultra-posh lounge open by reservation only, where popular DJs spin late into the night—or enjoy a swim at The Rooftop seasonal pool and bar.

Williamsburg is, writes Adatto, “the most rooftop-centric district” in the city. One of the most popular restaurants is Juliette, owned by an expat from Brittany. Here, you can sit at colorful tables under red umbrellas and enjoy French-inspired food, while watching for celebrities from music, tv and movies.

Heading south to Red Hook, you’ll find the three-tiered Alma, where you can enjoy Mexican cuisine and views of New York Harbor, Governors Island, and, of course, the Manhattan skyline. A friendly neighborhood place, the rooftop is open year-round, with heating when it gets cold. A bonus: Nearby Pier 6 at Brooklyn Bridge Park “is the ultimate kids’ playground, with…the largest sandbox” in the city!

New York’s rooftops aren’t devoted solely to eating and drinking. The athletically inclined can play tennis at the Midtown Tennis Club, or watch it from a roof terrace at Carry Leeds Center for Tennis & Learning. (The Junior Open U.S. qualifying matches for the best under 18 players are held at this Arthur Ashe inspired center.) There’s also soccer at Upper 90 Soccer, ice hockey at City Ice Pavilion, and just about every sport you can imagine at the immense Riverbank State Park, including indoor and outdoor pools, all overlooking the Hudson River. (Riverbank is so big, Adatto laughs, that most people forget it’s on a roof!) Birders get a chance to see over 29 species (as well as bats and thousands of honeybees) up on the Javits Center Green Roof. Be sure to book a tour, especially during migration. The second largest green roof in the nation, it’s estimated that the roof absorbs up to seven million gallons of stormwater annually—not to mention a fantastic habitat for our avian friends.

For the culturally inclined, Rooftop Films screens movies at various rooftops and other spots throughout the city. The Metropolitan Museum’s Cantor Rooftop Garden, five stories above Central Park, is perhaps one of art lovers’ favorite venues. You can wander around while sipping wine offered at the small bar. Opens in April. Brooklyn Children’s Museum, with its new roof garden blooming with native plants is a great spot for the youngest set, as well as their parents and grandparents. A more recent addition is the green roof above the swirling carousel at Pier 62. While the children enjoy riding the hand-carved animals (all inhabitants of the Hudson River area), adults, suggests Adatto, can enjoy “the enormous contribution of green roofs to the health of New York City’s infrastructure.”