Looking at the moon and beyond, past, present and future 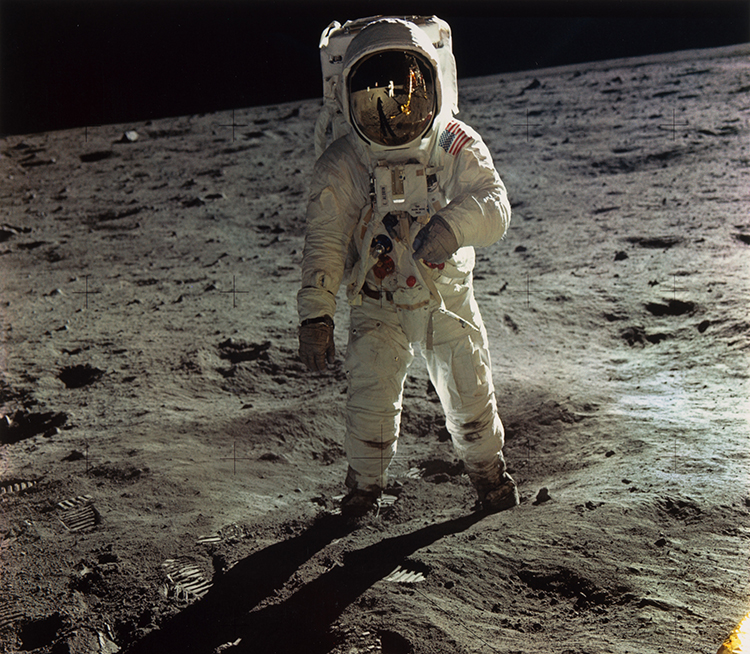 “One small step for man, one giant leap for mankind.” Do you remember where you were on July 20, 1969 when Neil Armstrong and Buzz Aldrin first walked (and cavorted a bit) on the moon’s surface? I do. I was sitting with several friends and my family, watching our black-and-white TV well past midnight, as Walter Cronkite reported on Apollo 11’s progress. Former chief astronaut Peggy Whitson, who holds the U.S. record for most time in space (665 days) was 9, and the moon walk made an impression, though the biggest deal: “My parents let us stay up late.”

Over half billion people around the world watched in awe. Songs were written, fashions were made, even drinks (remember Tang?) flowed from space. And now people around the world are celebrating the 50th anniversary of the moon landing, and with reason: as historian Douglas Brinkley has noted, thanks to the innovations made possible by the Apollo program “we may be living in what future generations think of as the Age of Armstrong.” 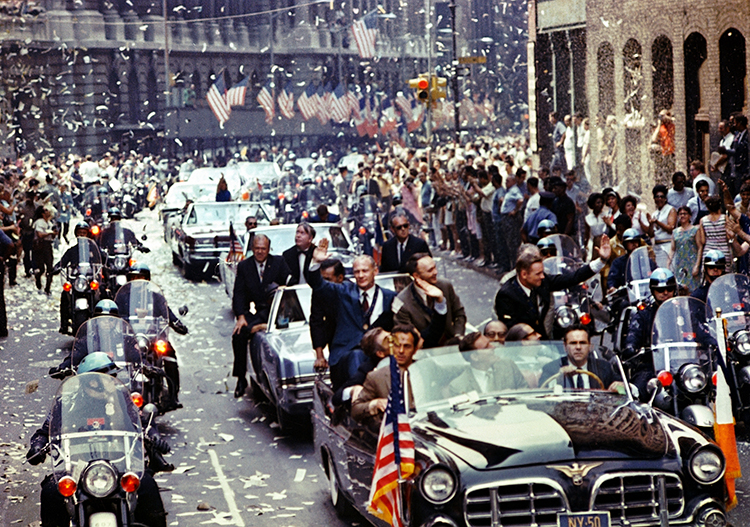 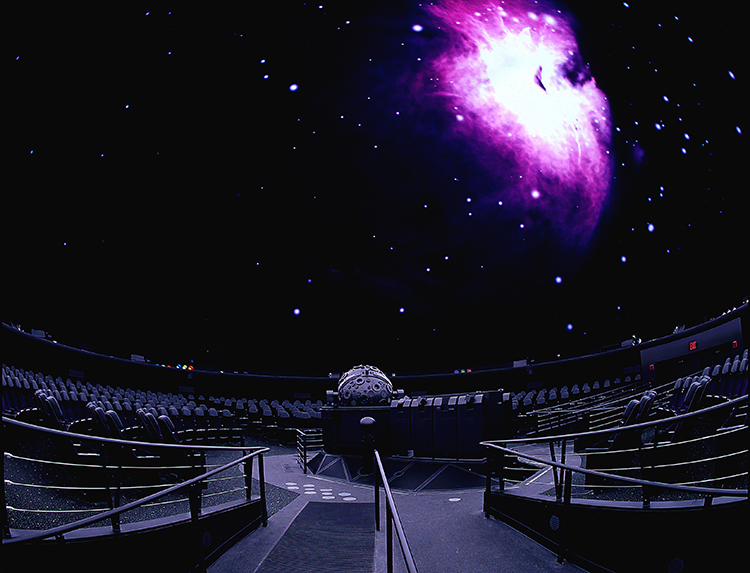 Here in New York City, where four million New Yorkers greeted the astronauts with a ticker-tape parade, there are some very site-specific celebrations.

SpaceFest, at the American Museum of Natural History on July 20, is a daylong exploration of humans in space—past, present and future. Want to see what it’s like to land on the moon? At noon, join Astrovisualization’s Director Carter Emmart, who will present an immersive model of the Apollo 11’s flight and landing created in collaboration with NASA’s OpenSpace. (Later, head to the moon and Mars with Emmart, via the visualization software. RSVP required, as space—at least in the planetarium—is limited.) The sun is in the spotlight in the Black Hole Theater, and in a talk by C. Alex Young on the perils of flying too close. Astrophysicist Jackie Faherty takes us beyond our solar system, using the latest findings from the Gaia data set, which precisely identifies the position of more than a billion stars and reveals the galaxy as never seen before.

And what findings they are: Faherty notes that the old footage of the Apollo 11 reminds us “this is what we saw and knew…. In 50 years, we’ve come incredibly far, from exploring our back yard to exploring the universe.” If possible, would she like to join a flight to the moon or beyond? “Once I started seeing what we see thanks to our software, I don’t need to go!” At the same time, she’s looking forward to more advances by women here on earth and on NASA’s next moon landing, with women. “For so long NASA looked at women as inappropriate as astronauts.” She’s also hoping that, as more private concerns take to space (“it’s like the Wild West”), regulations are made to protect the sky from reckless scattering of debris, otherwise, “we’ll lose our ability to explore.” 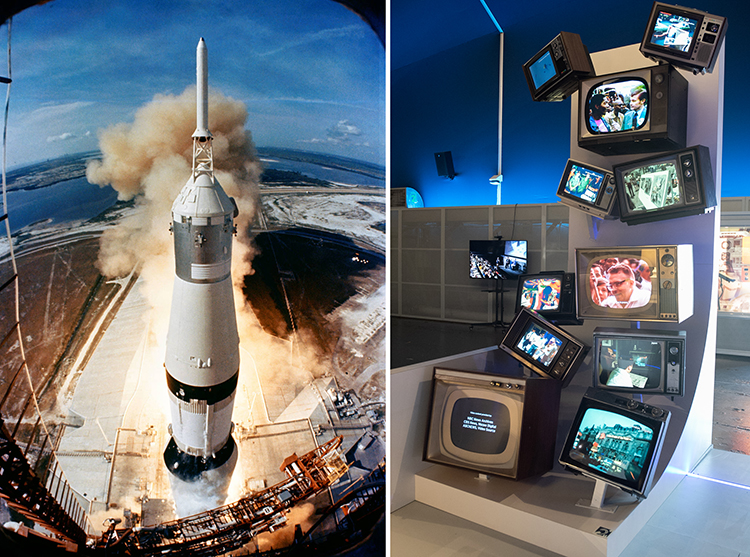 At the Intrepid Sea, Air and Space Museum, you can start the celebrations early on July 19, watching the biopic First Man on the flight deck (beneath the moon Armstrong walked on, if the sky is clear.) On July 20, former astronaut Mike Massimino—a born and bred New Yorker who was the first to tweet from space—will be joined by New York’s Upright Citizens Brigade in an improvisational play about sending men and women to the moon and beyond. Massimino, now senior space advisor to the museum and Columbia professor, sees this as a way to engage local Millennials and others in Apollo 11 celebrations.

Below decks, under the space shuttle Enterprise, you can literally step back into time and watch on old TVs as the Apollo 11 astronauts blast off, land on the moon, splash down into the Atlantic, and are the human stars of a huge NYC ticker tape parade. Nearby, another stack of TVs shows clips of the reactions to the moonshot. It was 1969, at the height of the Vietnam war and civil rights movement; there were protests in the streets. “We wanted to show how citizens watched and perceived the mission: in France, Japan, New York City. Not all were positive,” noted Eric Boehm, curator of aviation. Elsewhere screens show computer-generated images of future shots, including Space X’s plans to go to Mars. 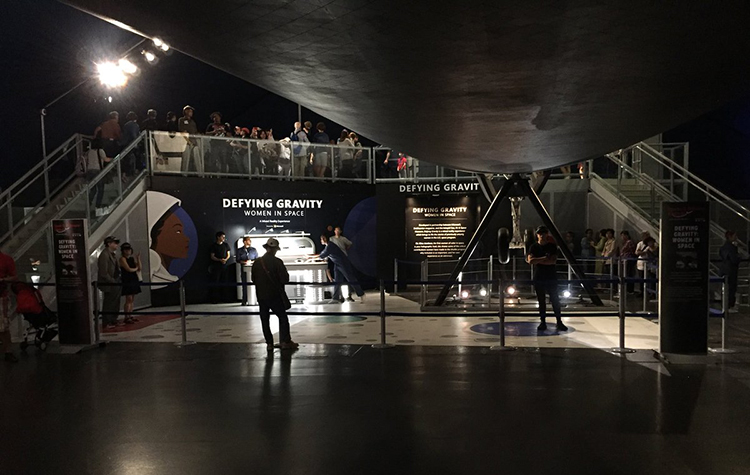 Photos and videos relate important milestones since Apollo 11: “It’s really heartwarming how much media attention there has been,” says Elaine Charnov, a senior vice president at the museum. “And women are at the core.” These include Kathryn Sullivan, the first woman to walk in space, and later, as chief scientist for NOAA, she was instrumental in researching global climate change; Peggy Whitson; and Mae Jemison, the first African American woman in space, who appears as a holographic host in “Defying Gravity: Women in Space a Mixed Reality Experience.” 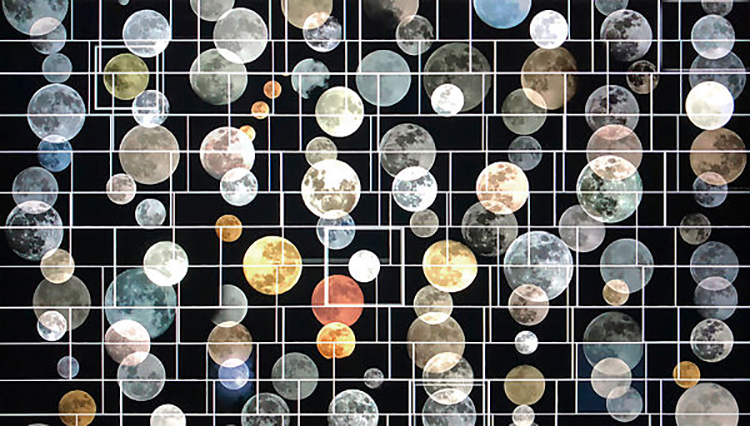 Visual images of (and from) the moon have been key inspirations for those of us here on earth, as is made vibrantly clear in the Metropolitan Museum of Art’s Apollo’s Muse: The Moon in the Age of Photography. Curators Mia Fineman and Beth Saunders have assembled a visual Baedeker of humans’ fascination with the moon. The journey begins with Galileo’s book Starry Messenger, in which—soon after the invention of the telescope in 1608—he recorded his observations, forever changing the vision of the moon, in science and art. Two centuries later, the invention of cameras spurred the dissemination of “scientific knowledge to professionals and public alike,” says Saunders. 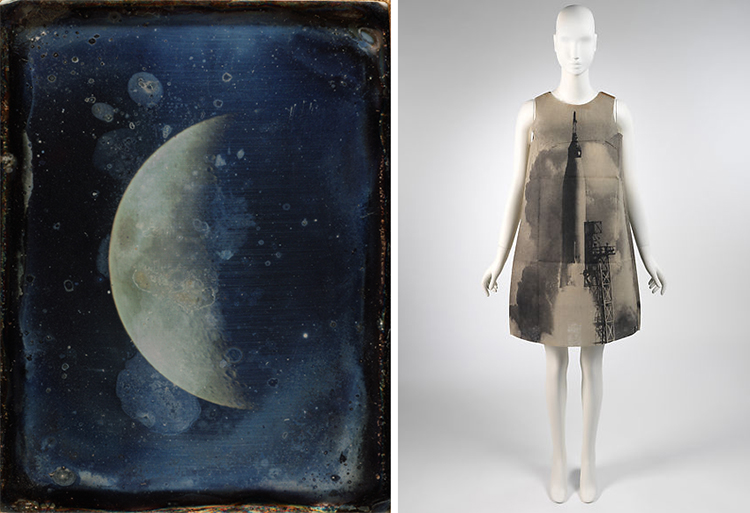 Over 170 photos, along with drawings, paintings and videos, show the incredible range of visions: Here are John Adams Whipple’s View of the Moon, a daguerreotype taken in 1852; Edward Steichen’s haunting The Pond—Moonrise, 1904; the “Rocket” Dress, made popular in 1968 by Harry Gordon; and Penelope Umbrico’s Everyone’s Moon 2015-11-04 14:22:59, a video of 1.1 million images taken from the internet in 2015. Looking at the moon and depicting it is, as Saunders writes in the catalogue (The Met/Yale University Press), “a universal impulse and subjective experience.” 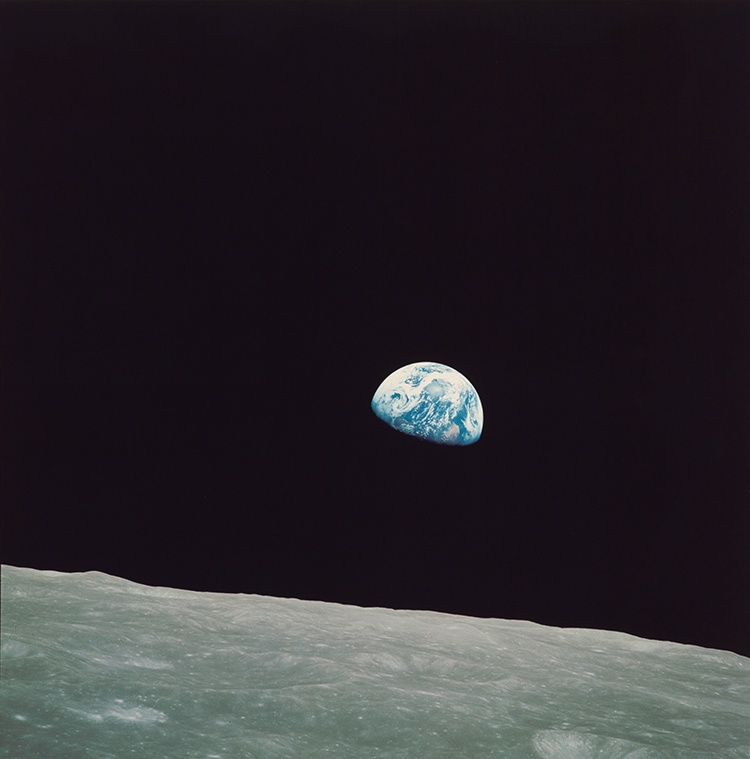 Not surprisingly, the famous shot known as Earthrise, taken by William Anders as Apollo 8 emerged from the far side of the moon, is in all three exhibitions. One of the most influential images in history, it brings home the beauty and fragility of our planet—and the importance of protecting it. As Anders commented just after the mission: “We came all this way to explore the moon, and the most important thing is that we discovered the Earth.”

Be sure to catch the podcast 13 Minutes to the Moon by the BBC. Dr. Kevin Fong does a deep dive into the final, tense 13 minutes of Apollo 11’s descent. Live recordings from the rocket ship and command central are combined with interviews with scientists, engineers, astronauts and others—who in 1969 were in their 20s and 30s, basically kids as Fong says—recount the moments (and years) of trials, errors and triumphs. Edge of the seat, mind-opening listening!

Numerous books have been published in advance of Apollo’s 50th. One of the best is Douglas Brinkley’s American Moonshot (Harper Collins). The award-winning historian traces how, after the consecutive punches of Sputnik and cosmonaut Yuri Gagarin’s orbit of the Earth, the U.S. managed to, as President Kennedy urged, “leapfrog the Russians.” In this masterful book, he details JFK’s seminal role in the space race. “[It] takes a rare combination of leadership, luck, timing, and public will to pull off something as sensational as Kennedy’s Apollo moonshot,” writes Brinkley. The young president—who was assassinated just 30 months after making his great challenge to land on the moon before the decade’s end—was a part of that rare combination, along with LBJ, rocket pioneers Robert Goddard, German Werner von Braun, and NASA administrator James Webb. A fascinating read, revealing what drove them and some 400,000 scientists, engineers and others to surmount the challenges—technological and political—leading to Neil Armstrong’s giant lunar leap for mankind.

To get the female perspective, Faherty highly recommends The Step: One Woman’s Journey to Finding her Own Happiness and Success During the Apollo Space Program by Martha Lemasters (Morgan James Publishing), a memoir of working at the Kennedy Space Center in the 1960s, when the men outnumbered women 200 to 1.

And, of course, The Right Stuff, Tom Wolfe’s 1979 classic, later reissued by Picador in paperback. Reread this and think back on the test pilots and late author, all of whom had the right stuff.

The Aldrin Family Foundation and The People’s Moon, along with Space Apps NYC, are celebrating One Giant Leap via a virtual “Times Square Takeover.” The plan: turn Times Square into the Sea of Tranquility, Apollo 11’s landing site, with a simulation of a Saturn V rocket launch and more. They ask that you upload a photo or video of your moon landing memories and your big dreams for the future at thepeoplesmoon.com. Then wait for blast off. 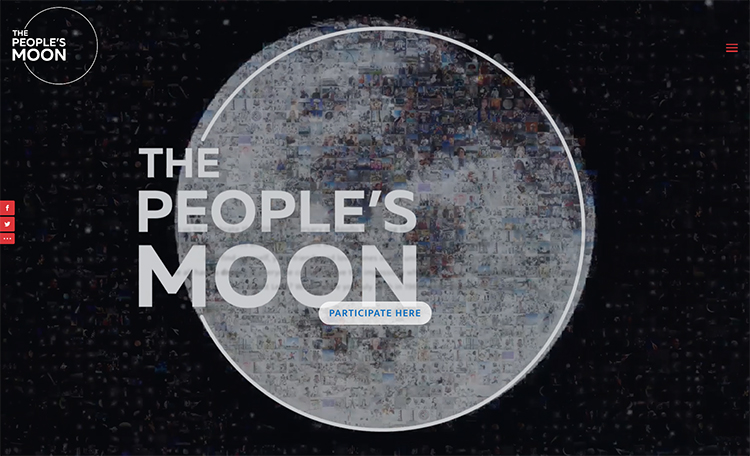