Makeup is almost passé in New York City. The look today is all about artlessness, authenticity and a clean, unpainted face.

Sometime back in the ’90s, I had the pleasure of interviewing the great fashion designer Norma Kamali about an innovative beauty line she’d just introduced: Natural-looking non-makeup makeup, for a clean-scrubbed look. The inspiration for this collection, Kamali told me, was a vision she had—of a woman at an evening event, wearing a sinuous gown (satin and slinky, as I recall), her face all but bare. No contouring, no blush, no mascara, maybe just a hint of color on her lips.

Kamali’s beauty line was short-lived, her anti-makeup agenda ahead of its time. But now that time has come. The bare face (or at least what appears to be a bare face) is happening on a wide scale. It’s a look, with street credentials and a message: I can’t be bothered … I’m above artifice.

“So many women spend thousands on clothing, gym membership, spas, saunas, weekly manicures, Botox and Fraxel—but it’s unfashionable for them to wear makeup,” points out Carin Giddings, a Soho illustrator and product designer. “It’s almost a sign of prestige to show off a natural glow.”

So who are these anti-makeup women? They’re not just purity-loving Millennials. Boomers and pre-Boomers are in on it too: creative types, certainly—artists, writers, off-duty actors, fashionistas—but also teachers, software developers, the legions who want to show off their dermatologically improved complexions, and all those who have discovered that makeup too often reveals rather than conceals wrinkles and sagging. No wonder so many women over age 50 are taking a less-is-more or even a none-is-more approach.

What’s more, this anti-makeup phenomenon is headquartered right here in Manhattan, of all places.

Katherine Dorn, head makeup artist at the Pierre Michel Salon on East 57th Street, tells me, “New York women wear less makeup than anyone else.” When her clients come in to get done before a big event, the look they request is artless, “as if they applied it themselves.”

Why New York? For one thing, this city has long had an unobtrusive, unfussy, low-key, laid back approach to clothing, hair and makeup. Don’t draw attention seems to be the mandate. And like much else that New Yorkers engage in, makeup antipathy is often a form of inverse snobbery—a riposte against suburbia and the Desperate Housewives look.

I asked some over-50 Manhattan makeup resisters why they object.

“Lately I dread looking all done up, like those women in the Trump entourage,” Sophie, a 60-ish art conservator, told me.

“Makeup never interested me,” said Alison, 74, a ’60s Flower Child who became a floral designer. For her first wedding, on a beach in 1967, she was shoeless and wore a vintage granny gown and no makeup. For her second wedding in 2013, she chose Comme des Garcons and relented to put on lip gloss and a flick of mascara.

“I gave up. Makeup is a losing battle for me at age 78”, says Jess, a retired graphic designer.

I also asked older women who do indulge in makeup why they persist in wearing it.

Tanya, a 55-year old attorney, puts it this way, “I’ve been using eyeliner for so many years, no one would recognize me without it. Besides, it’s pretty much expected at my office.”

“Are you kidding me?” Beth, a photographer, wants to know. “I had severe acne in my teens. Thankfully it didn’t leave scars, but it conditioned me never to go a day without foundation. I’m now 76, and I still find safety in covering my complexion.”

Okay, so maybe makeup has lost its cachet, but for those of us “misguided” enough to persist in the hocus pocus of wearing it, here are two suggestions for carrying it off in style: Go for a minimal look using today’s sheer yet velvety cosmetics. Or alternately, apply makeup strategically, to emphasize just one feature: lips, eyes or brows, leaving the rest of your face pretty much bare.

Here are some of the products that will give you these looks: 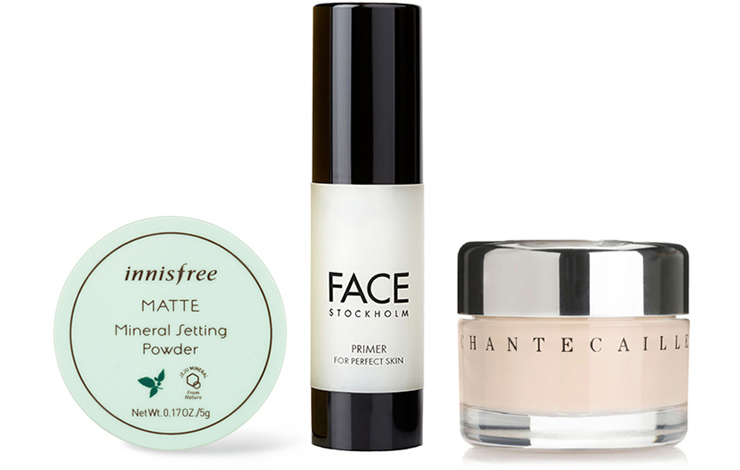 Let’s say you want your skin tone evened out, but traditional foundation is a No. Try translucent powder. Innisfree Matte Mineral Setting Powder leaves the skin remarkably smooth for hours afterwards. I consider it a virtual treatment product. $8.

Another possibility is a “spackle,” like Face Stockholm Primer for Perfect Skin. It’s intended as a foundation base that fills in tiny irregularities without adding color—but who says you have to wear foundation over it? $38. 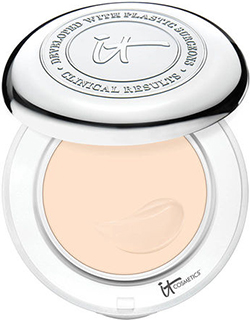 For medium coverage, CC+ Cream with SPF 50 is my daytime favorite. Brigitte Reiss-Andersen, the celebrity and runway makeup artist who’s done the faces of Catherine Deneuve, Michelle Pfeiffer and Emilia Clarke (the Game of Thrones’ Mother of Dragons) is also a proponent. “The application is smooth, the shades are great, and it gives extra coverage for women who like it or need it.” $39.50 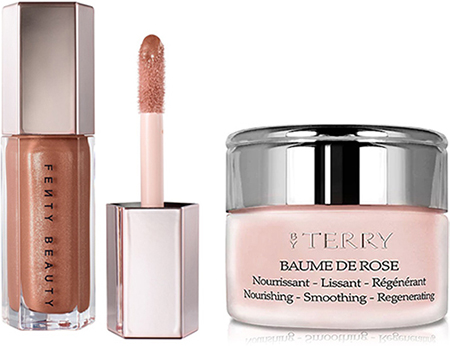 Want just a hint of color on your lips? Fenty Beauty’s rose-nude-tinted Gloss Bomb will do that. It’s also the best lip soother I’ve ever used—and actually feels like it’s delivering nutrients to parched lips. It’s shiny too; if that bothers you, just pat lightly with a tissue. $19.

Old-fashioned lipstick, meanwhile, has evolved in recent seasons. Lip crayons, lip cream in a pot, mutant pencil-lipsticks—these are everywhere today, the color of favor being oxblood. And now we’ve got intensely pigmented liquid and powder lip colors too. They turn creamy on contact and leave a long-lasting matte finish that gradually ends up as a desirably subtle stain.

Reiss-Andersen rates the finish on these lipstick alternatives “very on-trend.” The colors are mesmerizing, and create a gentle stain effect when patted gingerly onto the lips with the index fingertip, rather than with the pigment-saturated applicator. Or if you prefer a full-throttle lip statement, do use that sponge—but go lightly on the eyes and leave your complexion otherwise bare.

One such supercharged lipstick that’s a Reiss-Andersen favorite is Armani Lip Magnet Liquid Lipstick. $38. Another is YSL Tatouage Couture. “It’s an innovative and fun twist on a long lasting formula.” $38. Prefer a classic moisturizing lipstick? & Other Stories Lipstick is a well-priced satiny marvel in numerous bold and subtle fashion-right shades. $10-19. Or how about a creamy lipstick that delivers intense retro ’50s movie star tints? That would be Rodin Olio Lusso Lipstick. $38.

For the anti-makeup crowd, blush is an unpardonable sin. But the right soft shade adds a hint of vitality to over-50 skin. The trick is applying it L.I.G.H.T.L.Y. Just about every makeup artist I’ve encountered recommends NARS The Multiple in the shade called Orgasm. (Yes, that’s the name.) In easily wielded stick form, this wildly popular choice leaves a believable flush. $39. 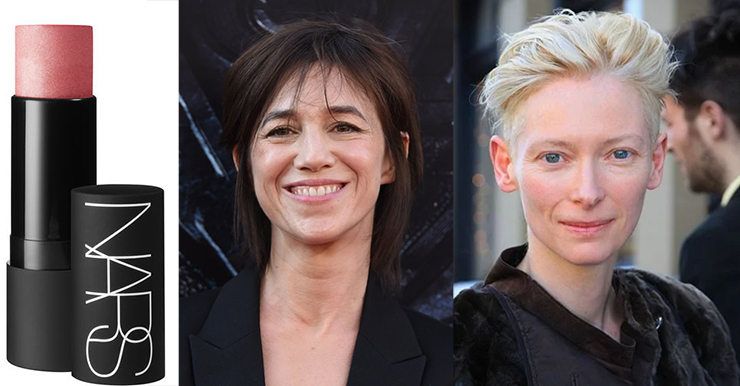 Get your blush on. NARS The Multiple in “Orgasm,” and ageless spokeswomen for NARS, Charlotte Gainsbourg and Tilda Swinton with their usual minimal makeup.
. . . . . . . . . . . .

Purple circles, wrinkles, heavy lidded-ness, puffiness: Who over 50 isn’t enduring multiple eyelid calamities? Concealers can help. The trick is finding a formula and shade that give good coverage without cracking or creasing. Jenn Jorge Nelson is one of many professionals who swear by YSL Touche Éclat. “Shade No. 3 has the right amount of peach to neutralize the blue undertones that emerge with age.” $29.

Suffering from bleary eyes? In my opinion, the best remedy that gives the face focus isn’t mascara—it’s eyeliner. But that go-to standby, eyeliner pencil, is severe on older eyes, says the celebrity makeup artist Lorraine Abeles, who does Regina Specter’s face. Like many makeup artists, she uses eye shadow as eye liner. “It doesn’t run the way liner pencils do.” The one she recommends is pigment-rich Lancôme Color Design. $22.

“You want something that’s almost not there,” adds Gail Bruce, 76, a former model who’s just started hipsilver.com, an e-commerce website for 60-plus women and men. She uses MAC Eyeshadow as an eyeliner, applying it with a lipstick brush. $18. 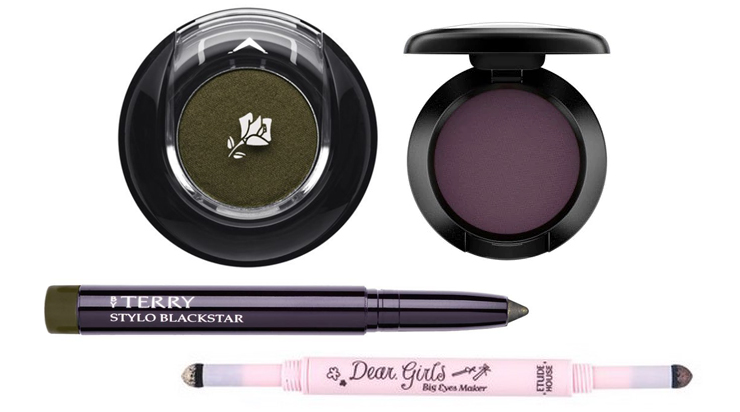 By Terry Stylo Blackstar is a waterproof eyeliner-eyeshadow stick that leaves a smoky, shimmering, perfectly sized no-brainer line. Try it in Bronze Green (if you can find it) or Copper Crush as an alternative to black, which can be harsh on older eyes. $30.

Etude House Dear Girls Big Eyes is a hybrid eyeliner-eye shadow that glides on like magic. A wand, it’s got a darker shimmer shade at one and and a lighter one at the other, both administered via sponge applicator. The shimmer, by the way, distracts from crows feet, circles and puffiness: $7 and up, currently out of stock, but check online. Also from Etude House, try Play 101 Pencil AD, $8.

Older eyelids look their best left untouched or shadowed with a soft pastel that’s kept close to the lash line. But if you want intense focus on your eyes, and you’re game for a smoldering, sultry look, go ahead. You will look older, but the payoff may be that you’ll also look gutsy and seductive. (Just choose a nude-ish accompanying lip color.) 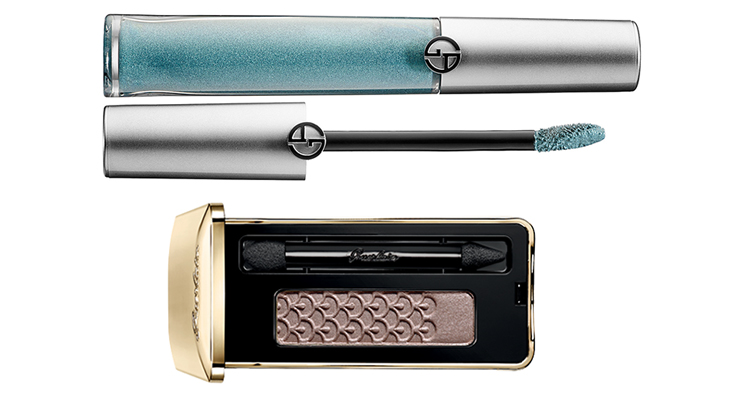 Reiss-Andersen recommends Armani Eye Tint Liquid Eyeshadow, which comes in light and dark shades and lasts most of the day. $30. Abeles likes Guerlain Ecrin 1 Couleur, a silky powder with gel-coated pigments that cling to the lids (sorry, discontinued). 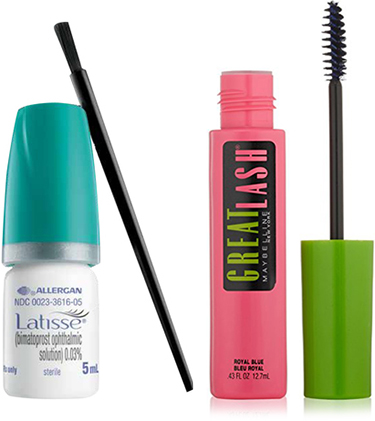 Mascara and lash extensions, while sometimes worn at black tie events, are of course disdained by purists. Instead, plenty of these purists cheat, so to speak, by getting lash tints. Available at hair and threading salons and spas, they generally last 4 to 6 weeks. $20 to $40. And these same purists use the prescription lash-grower Latisse—or bimatoprost, its generic name. Today, it’s priced well under $100.

Dozens of high-tech mascaras are out there for those seeking lash artifice, but Maybelline’s enduring Great Lash Washable Mascara always gets the job done. $7.40.

Emilia Clarke, a/k/a Daenerys Targaryen, a/k/a Mother of Dragons, with her platinum-wheat hair and contrasting bold, dark brows in Game of Thrones, has started a trend. A number of fashion-minded women (including those with grey hair) are deepening their brow color, but leaving the rest of their face free of makeup. And as a bonus, brow makeup helps fill in sparseness and skimpiness.

“There are so many amazing new brow products on the market,” says Reiss-Andersen. She loves Stila Stay All Day Waterproof Brow Color “because it applies like a thin Sharpie pen and you can create little strokes of color that look like brow hair. The shades are great too.” $21 (currently on sale for $10.50).

The Riverdale Solution: Rooms With a View