Here’s how two women with vastly different careers—an educator and a ballerina-turned-luxury-knitting entrepreneur—bucked the system.

Where do we find the gumption to embark on a retirement career? What inspires us? What gives us backbone and determination? The answers to these questions zoomed in as I interviewed the latest subjects in NYCitywoman’s over-60 career reboot series: two women with polar opposite retirement careers—one running out-of-school science programs for girls from kindergarten through high school, the other heading a cottage industry producing ultra-luxurious four-figure cashmere handknits. It’s unlikely these two would ever meet beyond the confines of this article. Yet they have a lot in common. Both were emigres to the U.S. and New York, and were single mothers too—solely responsible for their and their children’s welfare. And they bucked the system with similar determination, standing up for themselves and defying the odds. Their stories:

Thirty years into her career in the Norwalk, Connecticut public school system, Cynthia Barnett—a dynamo by any estimation—did the unexpected: she took an early retirement. “I felt stifled and increasingly disenchanted with my position,” she says. “My top strength is creativity; there was little opportunity for that, and I did not like the discipline which consumed a great part of the day.” 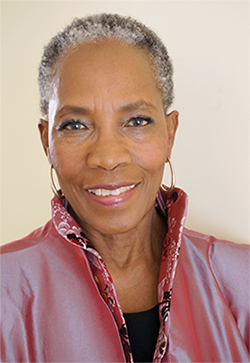 Afro-Caribbean by birth, divorced, raising three daughters with no child support, she’d also had to confront a school board denying her the assistant principal position for which she was qualified. When that job, at a school that was 65 percent Caucasian, initially went to a white male she describes as less qualified, Barnett hired an attorney. A few weeks later, the job was hers—at a workplace where she did not feel welcome. She stayed for 10 years.

Post-retirement, with her daughters grown up and out on their own, Barnett finished writing a book she’d been working on—Stop Singing the Blues: 10 Powerful Strategies for Hitting the High Notes in Your Life (published in 2003). After that, for once in her life she had no specific challenges to tackle. But she was too turbo-charged to settle into a life of leisure. And then she read an article detailing statistics about how few women have careers in science, technology, engineering and math (collectively known as the STEM disciplines). A lightbulb went off, and her “encore career,” as Barnett calls it, became a reality in 2010.

Always the astute organizer, she started a weekend and summer program for girls from kindergarten to high school, all focusing on the STEM subjects. Naming it Amazing Girls Science, Barnett relied on her past experience, first as a teacher, then a guidance counselor, and finally as the assistant high school principal she’d become. It was during those years that she witnessed first-hand schoolgirls having every bit as much aptitude for science as boys. The problem, she says, was stereotypes and gender bias.

So using her ample persuasive powers, she obtained funding from institutions as varied as the Girl Scouts, Rotary and Xerox to run Amazing Girls and provide financial assistance for the families of those who couldn’t afford the $35-197 fees. 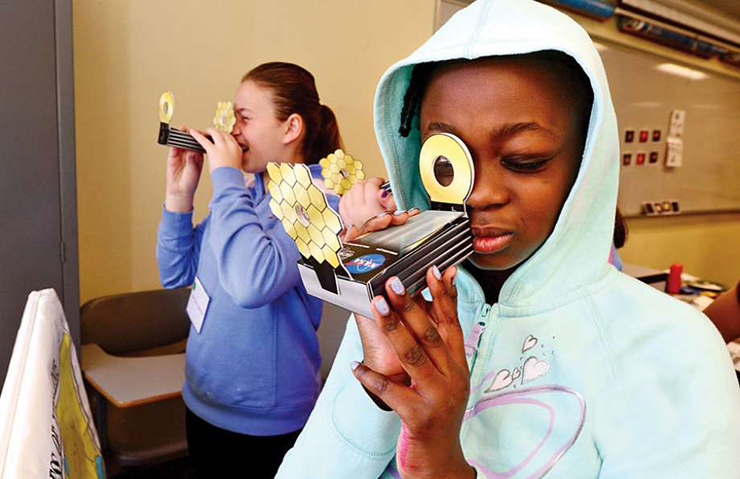 Largely due to word of mouth, Amazing Girls has been highly successful from the outset. Expecting 50 participants to turn up at her first event, she attracted 100, with the parents repeatedly asking What’s next? Barnett’s program, conducted these days with the enthusiastic support of the high school where she’d worked, now attracts 500 participants each year, from high-end Westport and Greenwich as well as from low-income areas in Bridgeport and New Haven, and even from the Bronx. (In fact, her program is so successful that Barnett is a finalist in the AARP’s annual Purpose Prize, given for “experience and innovation and the idea that our aging population is an untapped resource full of possibilities,” according to that organization’s CEO, Jo Ann Jenkins.)

But how has she made science a pleasure? It doesn’t hurt that Amazing Girl sessions are report card-free, and that the girls are divided into teams with sassy names like the Brainy Bunch, the Fast and Furious Cheetahs, and the Super Science Sisters. Also, the expert teachers (all women) Barnett hires are given license to create activity-based events that are fun. 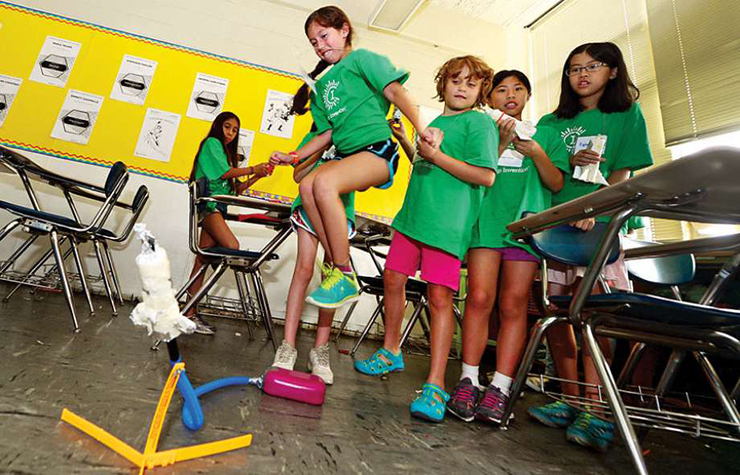 Barnett places an emphasis on the cyber-sciences, citing research showing that “the jobs of the 21st century involve coding, cryptography, and programming, so I want girls to be prepared.” She’s even devised a Technovation class that teaches app development and entrepreneurship. The material sciences are prominent too. In one workshop, girls bring in disused household electronics—radios, telephones, irons—and, wearing protective goggles and wielding screwdrivers and wire-cutters, take them apart (quite enthusiastically!) to learn how they work.

Other items on the agenda are an annual Science Conference, with hands-on sessions and meetings with role models; and a mother-daughter Engineering Fest, designed not only to interest girls in constructing things, but, as per its online description, to “increase mothers’ confidence as a role model to their daughters.”

Growing up on St. Vincent, Barnett developed a love of piano playing. Her skill at piano brought her, at age 19, to the U.S., where she attended the New York College of Music, earning her keep working at a factory inserting the ink in ball point pens, doing house-cleaning and waiting tables in a convalescent home. Her aim was to teach music to school children. But then that school got subsumed by NYU, giving her the opportunity to switch her major to elementary education and expand her range of teachable subjects. 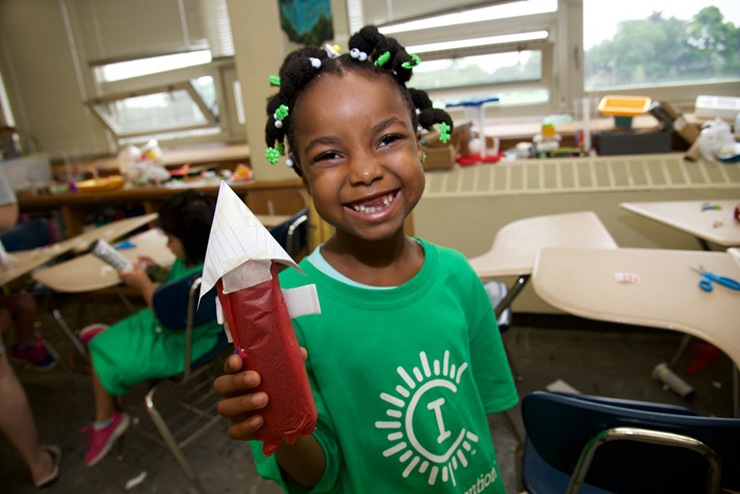 After getting her BA, Barnett went on to MA studies in Curriculum and Teaching, and eventually to her PhD in Educational Leadership—both at Columbia Teachers College. But her problem-solving, organizing and leadership skills, she maintains, came “from being a single parent of three girls, plus managing a full-time career.”

Full-time-plus might be a better term for how Barnett operates. Besides her Amazing Girl work and her book writing, she now assists other women in planning their own encore careers, and she even finds time to go on cruises—but not just to relax. Even on the high seas, she gives lectures—in subjects like self-empowerment. Today, Barnett is busier than ever, and, she says, “I’ve never been happier doing what I love and having total control over my life.”

When she was growing up in Communist Poland, Anya Cole vividly recalls, material goods were scarce and the bywords went something like Waste not and If you want it, better make it yourself. So as a ballet dancer with the Polish Metropolitan Opera, she spent her backstage time—in the middle of La Traviata, say—knitting her all-essential wraps, warm-ups and legwarmers.

Decades later, Cole has channeled her response to her material deprivations, and her lifelong love of knitting, into an audaciously improbable but thriving encore career: running a cottage-industry handknitting business—the kind you’d find on the Aran Islands or in Latvia’s hinterlands, but not in New York, where she’s lived for the past thirty years. 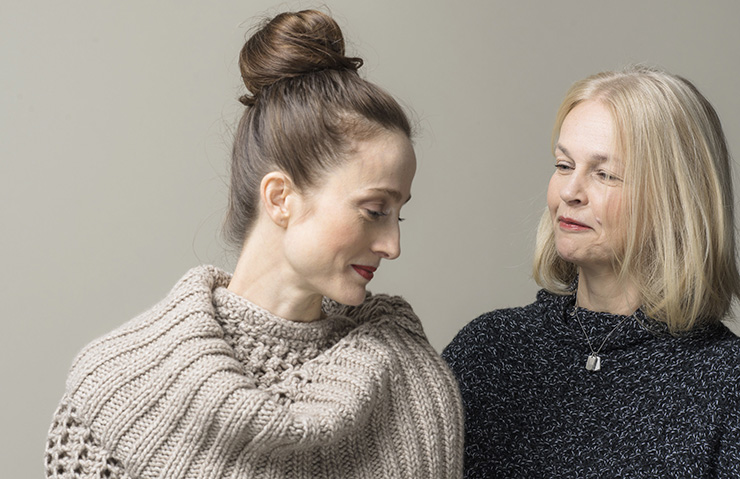 Her stock in trade? Sweaters, ponchos, and occasional dresses, as well as hats, scarves and men’s and children’s wear, hand-made by a crew of knitters residing in the five boroughs. These knits link three disparate style trends: 1) today’s turning to slow, locavore fashion. 2) A riff on the relaxed athleisure look that’s taken hold in recent seasons. And 3) cashmere, long valued for its legendary drape and buttery softness. In recent years, it’s gone mainstream and is sold at bargain prices at H&M and other fast-fashion stores. But Cole’s cashmere, sometimes blended with silk or cotton, is ultra-luxurious. And her all-enveloping, simultaneously waif-like designs look equally fetching on the toothpick-thin and the rotund. Taking Cole’s advice, some customers wear her voluminous sweaters over Uniqlo Light Down Parkas as contemporary fur coat alternatives.

How did her career morph from ballet to running a cottage industry? In her case, as in Barnett’s, it was an evolution. In 1984, she escaped to West Germany—Munich, specifically. To support herself, by then a single mother, and her baby daughter. she continued both her dancing—at the Deutsche Theater—and her knitting, this time earning money producing Bavarian jackets for the Geiger Store. In 1988 Cole and her daughter landed in New York as refugees, and in 1995 she married an American. 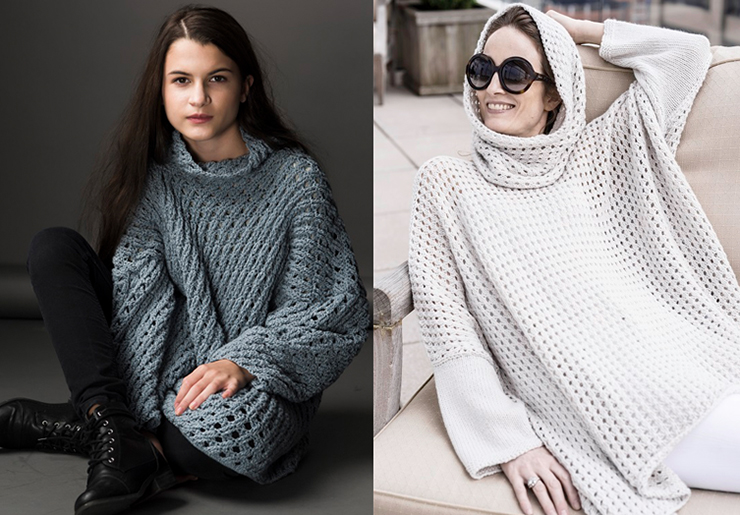 Continuing in the garment trade, she became a merchandising co-ordinator, first for Regatta Sport, then for Perry Ellis. But all the while, knitting remained her passion. And in 2009, funded by her husband, she launched her handknitting business, which she named Hania by Anya Cole. (Hania is her Polish given name.)

This kind of daringly quixotic craft-driven enterprise just blocks away from New York’s fast-paced Garment District would seem doomed to failure. But it’s been a nonstop success, with repeat customers paying on average $2,500 per sweater at Bergdorf Goodman in winter and at If Soho, Shari’s Place and Ahn Ann in Manhattan, as well as at 23 boutiques around the U.S., and also at Cole’s West 50s studio—where she takes custom orders. If the price sounds high, just consider, she offers: “My cashmere is entirely hand-knitted, and no more expensive than Brunello Cucinelli’s.”

Behind this success are the meticulous calibrations involved in every aspect of Cole’s highly organized production, where imperfections are taboo. Hania one-size-fits-many sweaters, for instance, may have stripes, cables or checkerboard textures, but they’re composed of rectangles and squares involving minimal shaping. This makes for near-foolproof knitting. The colors? Today’s universally pleasing powdery neutrals. As for the yarns—they’re heavy worsted weight, mostly spun, plied, and twisted to Cole’s exacting specifications at carefully chosen mills in Scotland and Italy. Italian cashmere is softer, she proposes. But Scottish fibers are longer—meaning they’re less likely to pill. She also imports limited quantities of undyed cashmere ethically sourced from farmers along the ancient Silk Road in Kyrgyzstan, purchased at fair market value, and spun in the U.K. 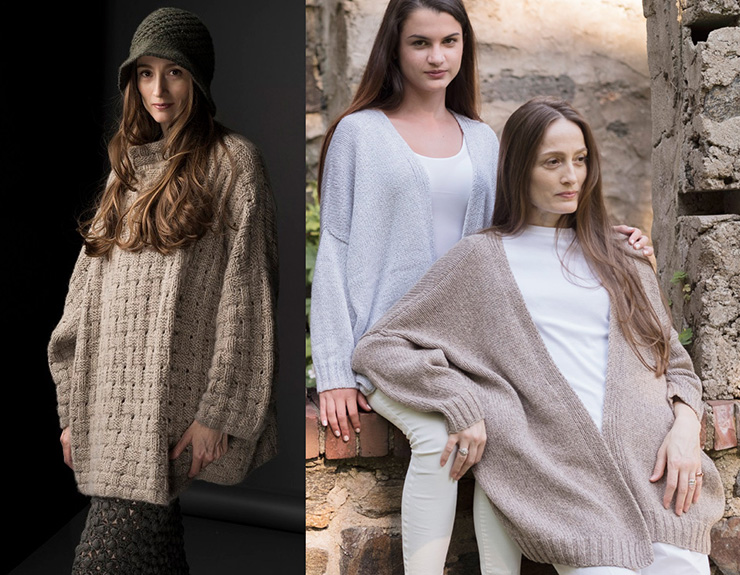 Of course, it’s the knitting that’s the deal-breaker. And here, Cole has assembled 120 experts, most of them from Yugoslavia, Kosovo and Albania—Europe’s hinterlands—who learned the craft from their mothers and grandmothers. All are now homemakers, with about 40 of them actively knitting for Cole at any one time.

How has she located these knitters? “They find me,” she offers. “It’s about word-of-mouth.” Each one comes to her studio to pick up the yarn and instructions, then does the knitting at her own pace at home or gathered with fellow knitters at neighborhood parks. Sweaters generally take a week or so to complete. “It’s supporting the local community,” Cole says.

The production process continues at Cole’s studio. Everything gets machine-washed on the delicate cycle with baby shampoo, to remove any remaining oils from the shearing, and then given a 20-minute dryer spin. Leery customers, unwilling to wash Hania sweaters at home, are welcome to return them to Cole for laundering.

As for other care issues, Cole handles them too with her own brand of concierge service. Consider the pullover, still in its shipping carton, whose midsection got chewed on arrival at the customer’s home by the enthusiastic family dog (who must’ve thought it was demolishing a cashmere goat). Cole repaired the damage by knitting a circular spot in a contrasting color where the hole had been. After all, even now—for this Eastern European émigré, nothing goes to waste.