Women who don’t lunch—but launch new careers in their sixties, making the most of their retirement. 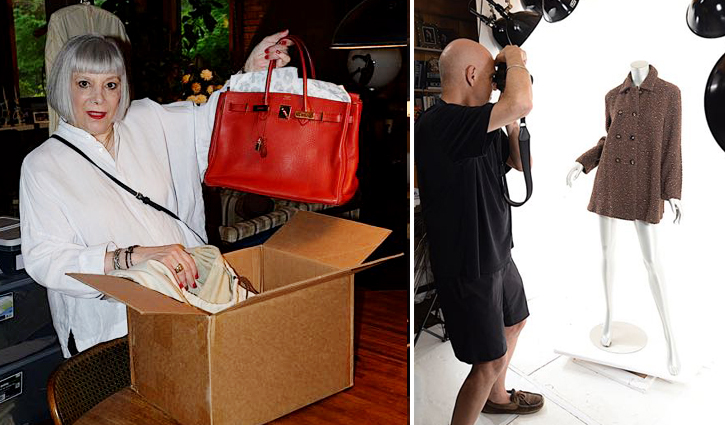 How do workaholic Type A personalities deal with retirement? Quick answer: They ignore it. A growing number of driven, high-energy careerists are now returning to the workforce in their sixties and seventies. And while they’re at it, they’re setting the pace for other enterprising Boomers seeking fulfilling and sometimes even lucrative new livelihoods after leaving their multi-decade careers. The secret of their ongoing success? Immersing themselves in new passions.

Here are the stories of two certifiable Type Aers who chose to retire, only to embark on new careers in their sixties. One has morphed from a museum administrator into a top-ranking online consignment reseller; the other, formerly a corporate finance director, today teaches Vinyasa Yoga. Neither has rejoined the workforce out of necessity. Rather, each is intrigued by her new career. And while they’re at it, the two are redefining retirement. Or rather, they’re making the very word obsolete.

Barbara Jaffee Green (above) has a confession to make: She can’t sit still. “I don’t know how to stop working; I keep going all the time.” Does she ever take a breather? Ever read a book? “How dare I? I listen to books while I’m working or driving.” She pauses for a split second, then concedes, “Okay, if all else fails and it’s bedtime, I’ll pick up and read an actual book.”

Recent transactions range from an Agnès B suede pleated skirt ($95) and Manolo Blahnik evening mules ($149) to an Hermès ostrich Birkin Bag ($13,000), and a Dorota fire opal cabochon ring with diamonds and sapphires ($20,930). Barbara also resells a smattering of notable furniture and decorative art works, such as a Picasso-signed Madouro ceramic bowl ($7,842), and a sphere lamp ($15,500) from the world-class metal sculptor, Albert Paley, known for his massive architectural forms and intricate designs.

This resale venture, which could easily fill Barbara’s entire day and night, and in one year generated over half a million dollars in sales (60 percent to the consigner, 40 percent to Barbara), started out of the blue. A graduate of the Parsons School of Design, Barbara served as assistant to the director of the University of Hartford’s Joseloff Gallery—a multimedia art showcase—for 15 years. There she mastered the Internet, still in its infancy, utilizing it to organize exhibits. This would prove invaluable in later years.

In the year 2,000, Barbara and her husband Gerry, an insurance agent, each retired and, with their two adult daughters now on their own, began splitting their time between a Tudor City apartment and a vacation home in the Berkshires. In 2002 Barbara took a critical look at her accessories shelves and realized they were teeming with handbags. So she experimented, consigning a Kate Spade basket bag with a flower on top to eBay, than five years old and beginning to attract attention as a trading site. The bag got snapped up immediately by a woman in New Zealand, who went on to become a loyal customer. Elated and intrigued, Barbara was hooked and began selling more of her own goods online.

Word got around among potential consigners, and soon gigantic cartons of chic wearables began arriving at her doorstep daily, from as far away as Japan. Even today, this de-accessioning of alluring, perfect-condition luxury wares—many with their price tags still intact —shocks Barbara, though she’s gradually learned two compelling reasons consignors part with their luxury goods: “to free up closet space—and to barter for facelifts.”

“Essentially, she’s managing a store, hitting every button that could possibly be pushed for a successful sale,” says Susan Levine, a longtime consignor. When a new item comes in, Barbara researches it, so she knows what will sell and what it’s worth. She tells of visiting a consignor who was clearing out her apartment and had thrown two worn Hermès bags into the trash. Barbara retrieved the bags and sold them for $400 and $500. (Refurbishing each bag at Hermès would cost $2,000—that’s $5,000 less than each would cost if purchased new.)

She’s also consistent with her fair prices, accurate product descriptions, and top quality visuals, thanks to her husband Gerry, who quickly became Barbara’s official photographer, logging in “a thousand shutter clicks a day.” These days, she’s so busy that she’s also hired an assistant.

So here is a retiree who has conquered the Internet and the sharing economy–terrain that Millennials have claimed as their own. But the real key to Barbara’s success is how she routinely sidesteps online “virtual” relationships, instead building long-term business friendships the quaint, old-fashioned way—phoning and meeting face to face with her consignors and purchasers. Recently dining at a Sutton Place restaurant, Barbara spotted a super-rare Hermès Constance baby crocodile bag (current resale value: $25,000, minimally) at the next table. By dessert time, she approached its septuagenarian owner, inviting her to consider consigning it with her. The owner declined—she was leaving it to a granddaughter. But by then in an animated conversation, the two agreed to meet for lunch. It’s all about “her enthusiasm for life, her openness to ideas, and dedication to whatever she becomes involved in,” says Zina Davis, former director of the Joseloff Gallery and Barbara’s boss there.

Does she have a message for NYCitywoman.com readers? Yes! Ever-loquatious Barbara welcomes hearing from readers who would like to consign. (Email her at bg4181@gmail.com.) And she’d like it known that she’s “living proof you can re-make yourself and find something that fascinates you. I’m retired and busier than ever before.” 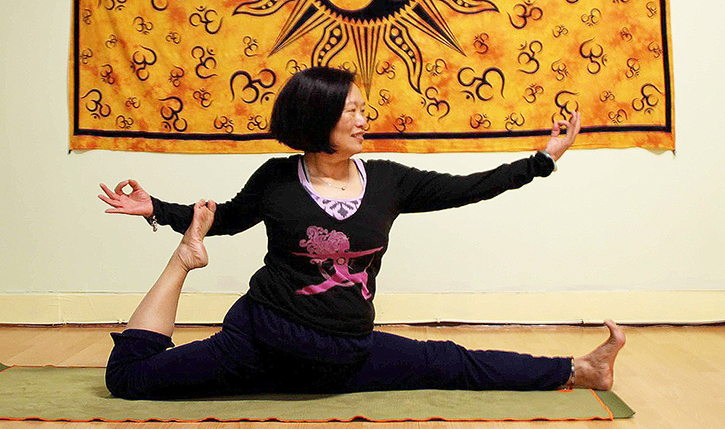 Helen Hsu, a numbers cruncher who developed a passion for contortion and contemplation.

Helen Hsu (above) vividly remembers the day she announced to her colleagues that she was taking an early retirement from her stratospherically high-pressure job as director of corporate finance at a global Fortune 100 firm near her home in New Brunswick, New Jersey. A graduate of Ohio State University, qualified as a CPA and CMA, Helen had a track record for developing and administering highly complex internal audits, as well as savings and equity compensation plans.

So how was this nonstop numbers cruncher going to handle her newfound freedom? “When I told my staff I’d be spending a lot of time teaching yoga, they looked at me as if I had three heads,” she recalls with mischievous glee in her voice. “I’m a Type A personality,” Helen readily admits. Quietly resolute, “she was also very demanding,” recalls Ive Lloyd, a former co-worker. Not only was Helen’s corporate career filled with deadlines, she used her spare time purposefully too—playing tennis, running during lunch hour, and entering marathons on weekends. Even when she was sedentary, she knitted hats and gloves for the needy.

Then one day while navigating a set of stairs, she fell and tore a knee tendon. No more running for Helen. A friend persuaded her to try yoga as a form of physiotherapy. “Not my cup of tea; at least that was my first thought,” she recalls. Then a charismatic instructor came along, teaching the energetic, flowing poses collectively known as Vinyasa yoga. Before she knew it, Helen became a convert to this ancient limb-contorting, body-and-soul balancing practice that culminates in meditation, teaching her something mind-bogglingly new: the art of sitting still. “I developed a taste for relaxation,” she explains. “I learned not to be so targeted, not so intent on getting things my way, not so go-go-go-go.”

So impassioned was Helen about yoga that she spent several evenings a week taking lessons to obtain a teacher training certificate that might come in handy holding after-hours classes. By 2015 she had accumulated over 200 hours of instruction, enough to qualify her for teaching at thousands of yoga centers. Soon she began holding evening classes, all the while logging in 300 additional hours of training, “to deepen my personal knowledge and awareness.”

So here it was: a satisfying new career—if she wished to have one. It certainly “gave her the courage to retire,” says her former colleague Ive Lloyd, who has attended Helen’s yoga sessions. And as it happened, events conspired to make that transition a reality. In 2012, Helen’s husband Alfred retired from his engineering job, and with their son grown up and on his own, the two permanently relocated to their weekend retreat in the coastal town of Spring Lake—ranked as one of the best places to live in New Jersey.

This increased Helen’s commute to work to over an hour, and within a month she began contemplating her own early retirement—with yoga teaching an obvious, ready-made new livelihood choice. “I’m not doing this for the money,” adds Helen, who charges a modest fee for her beginners’ to advanced classes. Rather, “it’s for the students, many of them retirees themselves, often with tight muscles from running and golfing.” It’s for herself, as well. Summoning forth the leadership skills that made her a successful finance director, she doesn’t just teach her yoga students. She participates, preferring arduous, non-stop Vinyasa poses, her favorite being the daredevil full-leg split—not for the inflexible or faint of heart.

“Somewhere along the way, she’s really mellowed out,” says Ive Lloyd. But that hasn’t prevented Helen from developing yet another career interest. She’s carved out time to become an avid photographer of birds, learning patience while waiting for her subjects to pose for the perfect shot.

“She was a great, great director—the best I ever had,” says Sharon Marczak, who formerly worked with Helen and now attends her yoga sessions. “Her persuasiveness and purposefulness, her confidence, decisiveness, supportiveness, openness, and directness: Everything you would want in a director—these she brings to her yoga teaching.”

“She understands the insecurity we feel at our age, but she builds our confidence, adds Gale Grossman, age 70, a mother of 7 and grandmother of 8. Under Helen’s tutelage she’s now doing Crow Pose—an intimidating upright handstand that’s a feat of concentrated full-body strength, stamina, and balance at any age. This is a triumph, not only for Gale, but for Helen herself—a triumph of persuasiveness, persistence, trust, and redefining what retirement can be.

Helen Hsu teaches at The Mind and Body Studio and is registered with the Yoga Alliance.