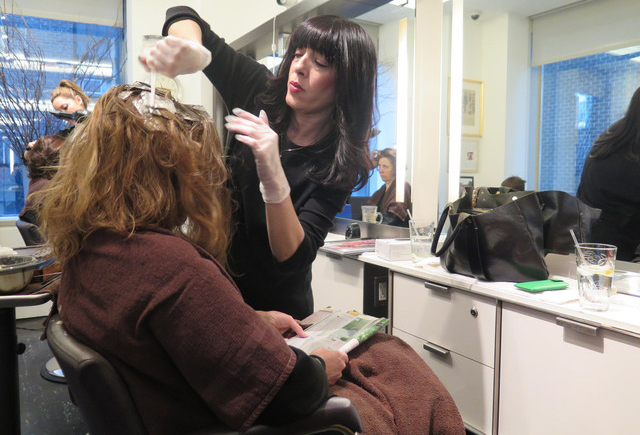 In New York, a town rife with fiercely opinionated best-of-the-best lists, we’ve all got our treasured haunts and trusted experts. Mine include Marie Sigismondi, my irreplaceable hair colorist, who plies her trade at Pierre Michel, the big, bustling 57th Street coiffeteria that, like Marie, is an unsung Manhattan beauty institution.

Marie is a tinting genius—expert at choosing perfect color and subtle nuances. She can do flamboyant and flashy, but more often than not she favors understated and discreet, i.e., a classic look, but with an edge. This, she says, is what New York women want. “They like to be in check with looking great at their age, rather than trying to look younger.” They’re quick to tell her the exact color they want; and Marie is a good listener. They’re also willing to hear her out, a good thing, since Marie is to the point and speaks her mind and has the answer for just about every hair color glitch, dilemma, or conundrum—even those pertaining to gray.

Not that she’s a prima donna. Other stellar colorists present themselves as elusive demigods, but Marie, a self-proclaimed girl’s girl, is a tender-tough, rough-and-tumble pal with a heart of gold. Hailing from the South Jersey suburbs of Philadelphia, she always had an eye for fashion and beauty, and easily morphed into a New Yorker right after hairdressing school in 1982. She was 19—and landed her first job at the Clive Summers Salon.

For the record, Marie does some blondes, but most of her clients are redheads and brunettes. And while tinting trends enter into her calculations, she isn’t swayed by them. “I love to make women pretty,” she says. “That’s my reward.” And ladies, she can battle drab, limp, mis-colored, brittle, over-processed, and otherwise skewered hair.

Consulting with a fledgling client, Marie takes a millisecond to scrutinize her and is already mixing color in her head, a skill she claims she honed at a School of Visual Arts course in color theory. I adore her quest for knowledge, but otherwise beg to differ. Marie turned me, a pale-faced former brunette, into a burnished Irish Setter redhead with deep russet nuances, and I can attest that her know-how is innate.

Marie’s clients are mainly professional women, running the gamut of New York careers: a judge, a filmmaker, stockbrokers, lawyers, doctors, psychotherapists, and several stratospheric media figures. As one eminently satisfied customer puts it, “Marie is the Michelangelo of color…and a mensch.” Another calls her “a pro…a magician! She knows instinctively what will work.” Says a third: “Most of all, she cares, and that is a rare and precious thing anywhere, but especially in New York.”

Here’s a rundown of Marie’s viewpoints and tips: 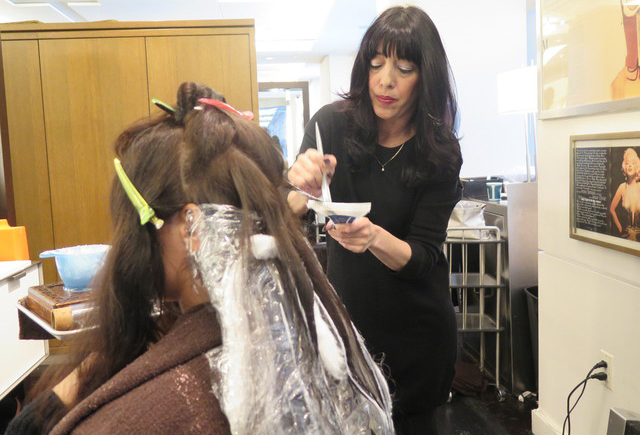 Salon vs. home color. No surprise Marie is anti-home hair color. For one thing, while first-time color is applied to the entire length of hair, subsequent tinting should be limited to the roots. Salon colorists readily accomplish this. Women at home don’t have that extra pair of eyes for the sides and back of their head. Instead, they wind up smooshing in the peroxide formula all over their head, every time they tint. The inevitable result is shoe-polish-build-up. Also, notes Marie, choosing the right color is a science and an art best left to professionals, who correct predicaments like dullness and seasonal sun-fadeage, making slight, unspoken tint adjustments their clients aren’t even consciously aware of.

Why highlights? Not only do highlights mimic a natural, sun-kissed look and add variation and dimension; they help hide roots—the bane of everyone’s hair color existence, which sometimes show through days after tinting. Marie highlights around the temples, where regrowth is most evident, and softens any gray starting to peep through. One of her clients, who is almost 100 percent gray, gets pale blond highlights that last up to 12 weeks before needing a touch-up. Diane Keaton with highlights, below left. 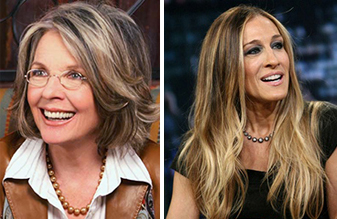 Root touch-up alert. Plenty of tinting products are available to stretch the weeks between color appointments. But Marie cautions against using peroxide-based tint fresheners like Clairol Nice ’n Easy Root Touch-Up or L’Oreal Root Rescue, which distort and pile on root color. Temporary non-peroxide formulas (such as the Rita Hazan Root Concealer—a liquid spray) are a somewhat better stopgap measure. But they’re not perfect, especially when (over)-used for weeks at a time (which is what plenty of women do), causing stubborn build up that doesn’t readily shampoo away and can interfere with the next salon color application. Marie recommends non-peroxide touch-ups, but only in the week before a color appointment. Just be sure to apply any liquid or gel touch-up with a toothbrush or eyeshadow brush. By all means avoid spraying it on—which can stain the scalp. The best root touch-up choice of all, if you want to preserve the integrity of your hair, is an ad hoc powder, like Color Wow Root Cover Up, or powder eyeshadow, blended to get an exact shade match.

Brunette is big. “Chocolate and mocha, particularly with highlights, are popular right now,” says Marie. She sees brunette as part of an emerging cultural direction, noting Alec Baldwin’s remark that in the old days, women went platinum to signal their sex appeal, but in the age of hyper-fitness, they accomplish this with body-conscious clothes. Adds Marie: “With all the new products and sophisticated knowledge we have in our profession, we can make darker hair look glossy and gorgeous. Gone are the days of just blonde, caramel, and honey tones. Now we add auburn, apricot, and peach tones to keep the depth and simultaneously add vibrancy.”

Ombré? It’s the latest haircolor trend: Darker at the roots and mid-shaft, gradually lightening at the ends, it’s accomplished by highlighting lower portions of hair. Marie doesn’t often recommend this shading technique for her over-50 clients—though she admits that done softly, especially around the face, it could work at any age, as it does for Sarah Jessica Parker, age 49, above right. So sought-after is this ombré-light approach that it’s got its own name: sombré. 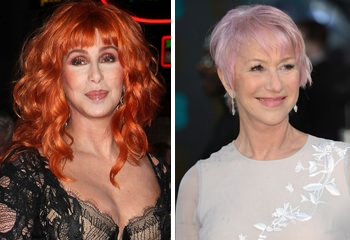 Manic Panic? “We are not all Cher,” Marie proposes. Oh. Neon-electric Manic Panic turquoise, violet, green, and shocking pink work “only if you can walk the walk, which means it has to look right on you,” and rarely does it remotely look right on anyone over age 50, she maintains. Self-assured Brits like Helen Mirren can carry it off with aplomb. As for the rest of us? Not quite so much. 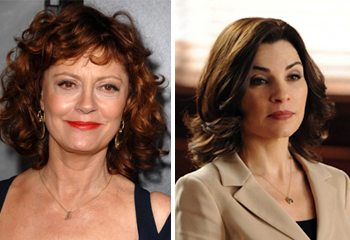 Curly vs. straight. Straight, smooth hair reflects light better than curly locks. So if you want shimmer and shine, straight is the way to go, says Marie, particularly for darker brunettes such as Julianna Margulies, left. Since dark hair doesn’t reflect much light, these brunettes need all the shine they can get. They benefit immensely from the sheen that comes with blow-drying, pressing, or otherwise straightening their hair (though at the same time they risk damaging their hair). Redheads, on the other hand, such as Susan Sarandon, far left, who have the brightest hair of all, with a built-in, light-bouncing pop, can far more readily handle curls.

To minimize porous hair (a detriment to tinting), use a conditioning mask once or twice a week. Marie recommends Kerastase Nutritive Masquintense, available in formulas for thick or fine hair.

As for styling, the less you mess with your hair, the better. Avoid blow-drying and straightening and curling irons as much as possible.

To avoid styling-product build-up (which interferes with applying a new batch of hair color), Marie recommends using a clarifying shampoo once a week. She prefers Bumble and Bumble Sunday Shampoo and recommends using it one day before coming in for a color appointment. Doing that is like giving the colorist, and yourself, a bonus, allowing the hair to absorb the maximum amount of tint. Whatever you do, don’t shampoo the day of a color appointment. That may cause scalp irritation.

Not to put too fine a point on it, Marie isn’t overly fond of gray hair, which she considers “a big no-no that screams age and is in danger of making you look like you don’t take care of yourself.” That said, she readily admits that some women carry it off in style. For those who have gone partially or fully gray, she’s got this advice:

Check your brows. This is critical, says Marie. Brows define and delineate the face. If they, as well as the hair, have turned gray, not only does the face lose focus, but the brows tend to acquire a wiry texture. Solution? Darken them. On the other hand, brows that have remained dark brown after hair has turned gray should have their color softened. Both darkening and softening can be done at home via brow pencil or powder. Or have a salon colorist do it.

Showing some gray? Following the lead taken by men, a growing number of women with tinted hair, especially in New York, are lately revealing salt and pepper, or at least some hints of gray. Marie achievers the look by painting lowlights (dark versions of highlights) onto scattered slivers of hair, and letting the gray grow in elsewhere.

Going gray after tinting. Growing out gray on tinted hair is the hardest thing in the world, says Marie. But she admits that those who do it tell her how liberating it is not to have to color their hair every month. The least painless way to make the switch? Wear a wig for the duration. Or just let it happen, says Marie, who suggests weaving in highlights to minimize the demarcation line. 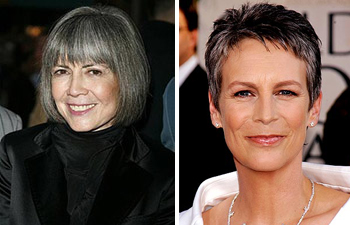 Get a modern cut. Think bob or pixie, and keep it trim, as do Anne Rice, above right, and Jamie Lee Curtis, left. Avoid barrel curls or long hair, unless it’s worn in a loose and pretty chignon.

Good colorists choose their tints by routinely assessing their clients’ bearing, mien, complexion, and eyes. Marie’s expertise is factoring in the skin’s degree of lightness or darkness and undertone (pink, yellow, red, or blue) and nuances in the eyes. Result? Hair color that gives complexion a healthy glow and creamy look and coaxes the eyes to sparkle and pop. Some choices Marie is likely to make:

For women with yellow-olive skin and brown or hazel eyes, Marie favors rich, deep color—a warm brown with reddish highlights, or maybe a distinctive Bordeaux. The key with this skin tone, she says, is avoiding more yellow—there’s already plenty of it on the face. 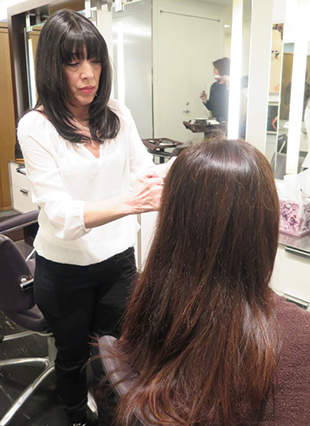 For women with dark blue-toned African-American skin and brown eyes, she likes lightening up—into a medium brunette or buttery blonde.

For pale-skinned, pink-toned, green-eyed blondes, she prefers a golden red, yellow-gold, or even an unapologetic Titian red.