In her sumptuous book, Wendy Moonan takes us on a magical tour of the city’s most memorable rooms, opening doors to residential spaces that “amplify our knowledge of New York’s social history.” 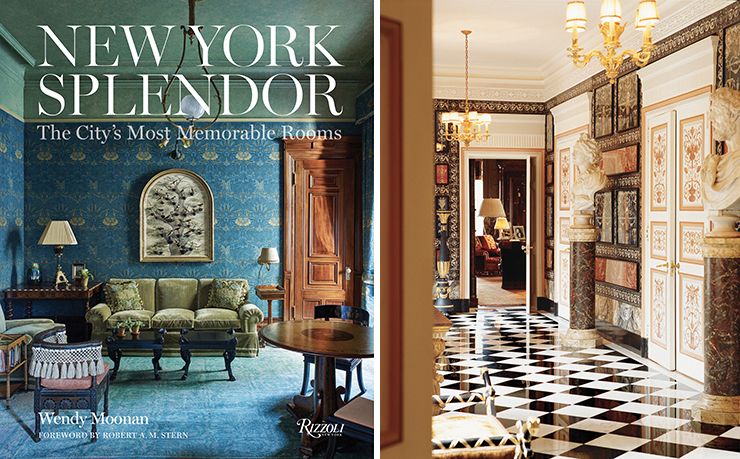 Since the 1980s, Wendy Moonan has been reporting on interior design and architecture, a a beat that gave her entrée to many of Manhattan’s most extravagant residences. In New York Splendor: The City’s Most Memorable Rooms (Rizzoli), she takes readers on a spirited romp through the palatial homes of the top .1 percent.

Some rooms, she notes, live only in memory: the “luxurious library” of Brooke Astor, the “legendary” patchwork-quilt bedroom of Gloria Vanderbilt, the exceptional abodes of the Rockefellers and the Paleys, and designer Bill Blass’ Sutton Place apartment—“a lesson in classic simplicity.” Others have remained intact, but serve different purposes, such as the Whitney’s Gilded Age “Venetian Room,” designed by Stanford White of McKim Mead & White that is now the mirrored reception room of the French Embassy’s Fifth Avenue cultural center. And don’t forget the home and studio of artist Donald Judd, now a museum open to the public by appointment. 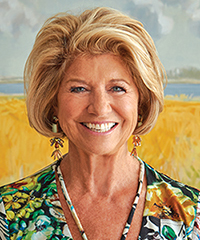 Here, too, are rooms that have been designed as recently as this year with dreamlike amenities: an underground swimming pool, a bath with unobstructed views of the Hudson—and a gym, complete with basketball court!

Moonan explains that her diverse “favorite private residential rooms” meet one main criterion: “each project has the ‘wow’ factor.”

In this 320-page tome you will also visit penthouses and townhouses harboring collections and furnishings that museum curators dream of: A foyer designed by Patrick F. Naggar becomes a “temple-like gallery” that accommodates a larger-than-life bronze statue of a Roman emperor guarded by Greek and Roman marble busts perched on black pedestals.

Moonan, who wrote the antiques column for The New York Times for many years, has a particular love for the decorative arts—and for designers like Robert Couturier, who, she writes, “was thrilled to be able to create a Louis XVI style house for clients in Borough Park Brooklyn, complete with paneled boiserie and antiques from the best Paris dealers.”

Artist Julian Schnabel’s 50,000-foot palazzo is also on tour, as are the manses of fashion designers Adolfo and Oscar de la Renta. Top designers and architects abound, including the renowned Robert A.M. Stern, who wrote the foreword for her book. Others—including William T. Georgis, John Saladino, Juan Pablo Molyneux, Tom Britt, Massimo and Lella Vignellis—even invite us into their own spaces.  The tour is long and luxurious. Sit back, read, dream, enjoy!! 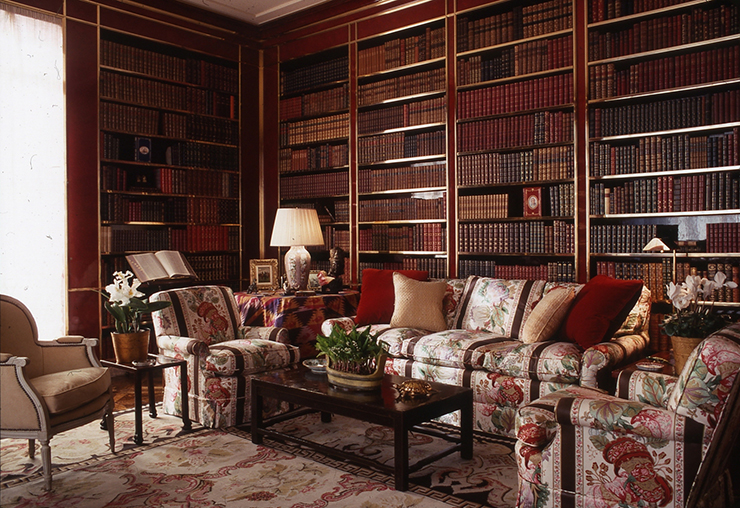 Of 14 the rooms in Brooke Astor’s Park Avenue duplex, the library was her favorite, decorated by Parish-Hadley to display her husband’s collection of rare books. Photograph by William P. Steele.
. . . . . . . . . . . . 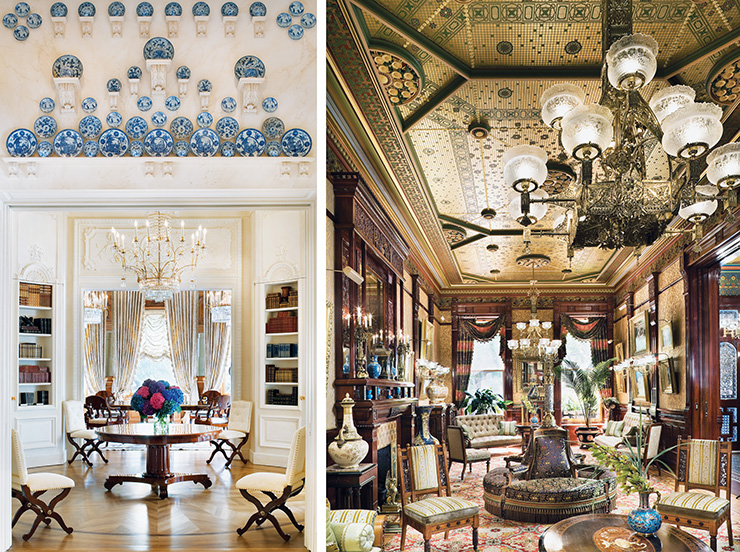 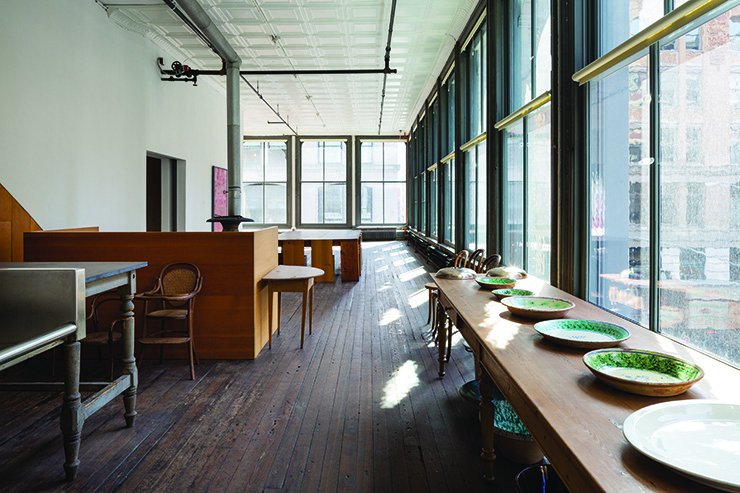 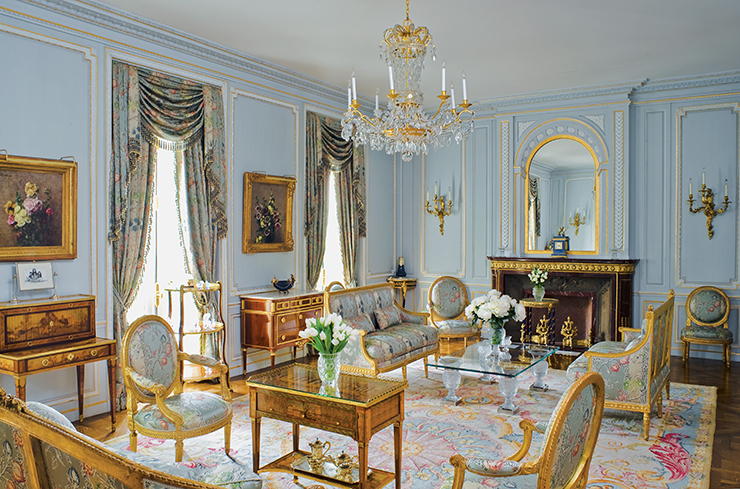 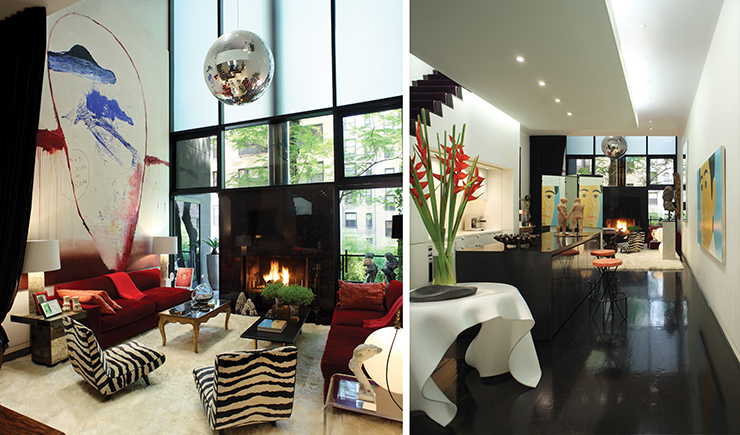 Top: Architect Robert Couturier designed a “1880s version of Louis XVI house” for clients in Brooklyn. Photograph by John M. Hall. For his own home and office architect William T. Georgis opened the living room to the garden with a glass curtain wall; portraits of the architect, painted by Alex Katz, greet guests. Photograph by T. Whitney Cox, courtesy of Georgis & Mirgorodsky.
. . . . . . . . . . . . 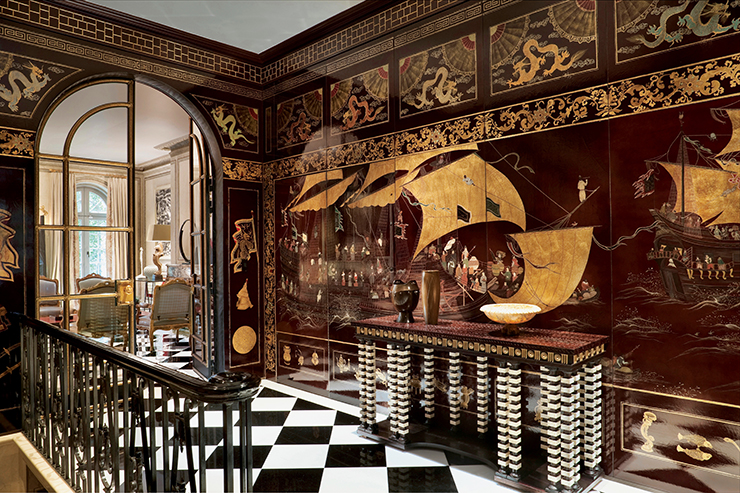