Get your your marching boots and pink “pussy hats” ready! On January 20—the anniversary of Trump’s inauguration—join some 400,000 people nationwide in the 2018 Women’s March. 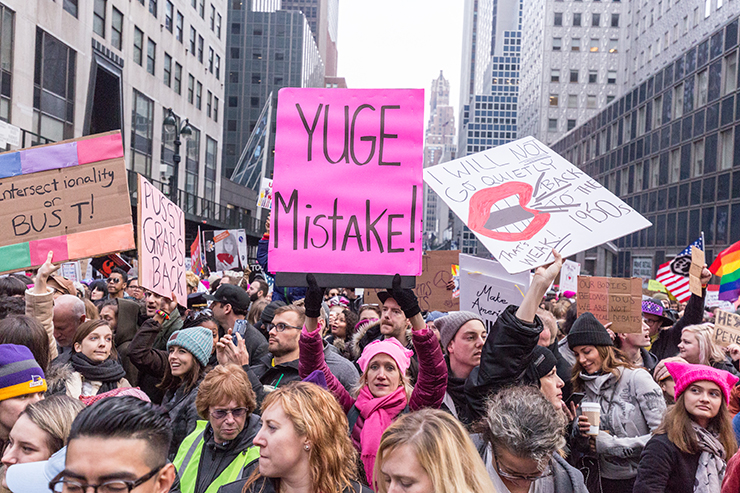 One year after four million women (and men) marched world-wide in support of women’s rights, following the inauguration of Donald Trump as President of the U.S., the 2018 Women’s March takes off on January 20th.

In New York City the rally starts in Central Park at 11 AM. Entering at Central Park West and 72nd St. you will encounter a multi-cultural mix of musicians and speakers, including #MeToo founder Tarana Burke and immigration activist Angry Rivera, all protesting President Trump’s anti-democratic agenda. Dozens of groups are joining in; the “march party,” as some call it, begins at Columbus Circle and then heads down Fifth Avenue past Trump Tower; a high-spirited physical display of our determination to defend our democracy and the rights of all Americans. (See the Women’s March Alliance website for information and a map.)

But the march is just a piece of the resistance: The march is a rallying point for continuing and dedicated action, and a number of groups are sponsoring events leading up to and following the march.

One of the most recent—and certainly most creative—groups is The Federation, founded by musician Laurie Anderson and producers Tanya Selvaratnam and Laura Michalchyshyn (co-founder, with Robert Redford, of Sundance Productions). In the belief that art is essential to democracy, the coalition of artists, producers and institutions is using the arts to unite and to keep borders open—hence the hashtags #ArtUnitesUs and #CultureKeepsBordersOpen.

Anderson conceived of the idea last year after a group of visual artists, including Richard Serra and Cindy Sherman, organized a controversial “art strike” that was observed on Inauguration Day by many top New York galleries. “But you should never tell artists to shut up. A terrible idea!” says Selvaratnam. “This administration is terrified of artists!”

To leverage the power of art, The Federation has launched ArtActionDay to coincide with the march. Workshops, poetry readings, panel discussions and art interventions of all kinds are being offered throughout the country, a number taking place here in New York City (see The Public Theater, for instance, below.)

You can also join in virtually: Laurie Anderson has curated a special Spotify “creativity boost” playlist and podcasts of readings will be made available. The website also provides a downloadable kit for DIY activism.

Leading up to the March:

The League of Women Voters—as part of a year-long drive to register one million women (and men) to vote—will host a voter-registration training session on January 17, 6:30 to 8 PM. On January 20, the League will register people at the rally and during the march. Help them!

On January 18 at 7 PM Food & Water Watch hosts an evening at the New York Society for Ethical Culture reviewing Trump’s dangerous anti-environmental agenda and looking at ways to strengthen activism, including an Off Fossil Fuels Campaign to move to renewable energy.

Need some laughter and drinks? Try “The Symposium, an Academic Standup.” Historians, data geeks and scientists—badass feminists all—mix humor and cutting edge ideas in a night of comedy at the Caveat, January 18 at 9:30 PM. Ticket proceeds go to the march!

The Public Theater will host a free musical event, a sing along with MILCK’s viral song, “Quiet” (an anthem of the #MeToo movement) and a self-love workshop, from 3 to 4 PM.

PEN America will host readings on the steps of the New York City Public Library, 5:30 to 6:30 PM. Jennifer Bartlett, Anne Carson, Anne Waldman and many others will read works underscoring the right to free expression. (Added bonus: music by the Revolutionary Choir and a light display by NYC Light Brigade.)

VoteRunLead, along with the New York Women’s Foundation and other groups, presents “Women Run 2018,” 4 to 8 PM at the Helen Mills Theater, 137 West 26 Street. Erin Vilardi, founder of VoteRunLead leads a program encouraging women to run for local office and informs us about what steps to take (the hashtag says it all: #RunAsYouAre). Followed by a panel on ending sexual harassment. (Plus music, wine and food.)

More events and venues can be found at the Women’s March Alliance website.

Women on the March to History by Suzanne Charlé