Love, Loss, and What You Wore 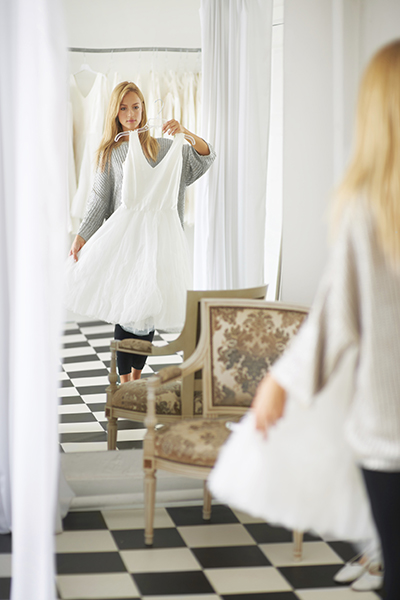 Twenty-odd years ago advertising executive Ilene Beckerman, then almost 60, wrote and illustrated her first book, Love, Loss, and What I Wore, a captivating memoir that was adapted into an award-winning Off-Broadway play by Nora and Delia Ephron. As of today this little book with its simple drawings and spare prose has sold more than 150,000 copies and has been translated into six languages (including Japanese). And it still sells briskly.

I recently met Ilene in a book group where she was the guest speaker addressing twelve women, ages 19 to 81. Despite our age differences, we all felt an instant kinship with her, as her warmth and unique fashion sense reminded us about the emotional touchstones our clothes hold for us. The reason, she said, that both her book and the subsequent play were so successful had to do with their acknowledgment of women’s emotional connections with their clothes, a bond that reaches across generations, nationalities, and income levels.

Presenting Ourselves to the World

“You can’t control your life, but you can control your closet,” Ilene said. “When you decide what you’re going to wear, you create who you are, who you want to present to the world. In doing so your clothes develop a certain meaning. You can be a conservative matron, a playgirl, whatever. Now I’ve become sort of gypsy chic.” Ilene, 83, who’s also known by her girlhood nickname of Gingy, recently cut off her long gray pigtails (“I didn’t want to deal with hair,” she told me), and always covers her head with a kerchief. “It’s amazing how a yard of fabric can mean different things to different people: Hasidic Jews think I’m one, Muslims think I’m one, women with cancer think I have cancer (which I do now), and my kids think I look like a bag lady.”

A very different style of self-presentation is what Manhattan attorney Dorothy Gray calls “visual credibility.” “Older women,” she says, “need to wear interesting clothes so that people will pay attention to us.” Dorothy found that when she walked into a room or was introduced to younger lawyers, “people’s eyes glazed over and they ignored me because I was just an average looking older woman.” But when she began wearing clothes and jewelry that she had bought at crafts shows or on her travels, not only did people pay attention to her—they thought she looked younger. One jacket she smiles about was sheared mink dyed dark green, in which she was photographed for The New York Times Style section.

Clothes We Keep from Long Ago

I myself was surprised to find out how often women keep outfits they know they will never wear again. I can understand why some women might save a wedding dress, but I never imagined that a divorced woman would also save one. It was interesting to hear some of the reasons why.

Among the garments women brought to the meeting was a wrinkled black dress that the owner pulled out of a plastic bag. Why this sexy black number? She had worn it fifty years earlier when she had eloped and wanted to flout tradition and go against expectations. (Eventually she realized she had married her husband for the same reason, hence their divorce.) My friend Debra Rapoport still wears the colorful wedding dress she made and wore 43 years ago, even though her marriage only lasted seven years. Why does she still have a good feeling about the dress? Because as a prolific textile designer Debra still enjoys the flair she brought to its unique design and associates it with her creativity rather than with her marriage and amicable divorce.

When I called Manhattan psychoanalyst Kay Marinucci to ask why women keep dresses from the past—even ones they know they will never wear again—she compared these long-held clothes to a security blanket, “a talisman that may be a way of helping a woman feel good—or reminding her that things don’t always go well but the clothes reassure her that she got through those bad times.” To understand the pull of certain clothes she suggested talking about them, either with a therapist or with a group of close friends.

What Our Clothes Reveal

Sometimes we associate clothes with lessons we have learned about ourselves. My youngest daughter, Dorri Olds, a writer in Chelsea, remembers a pink fake-snakeskin leather jacket. “It fit me perfectly and I wore it constantly. But then one day a beggar spit on the jacket, and I started screaming and cursing at him. Then I noticed that people were staring at me and I realized I looked like the crazy person because of how I was carrying on. So I pulled myself together and went about my errands. It was a lesson in not letting people get to you.”

Then there are the hiking pants I bought twenty-five years ago when my now deceased husband, Mark, insisted, despite my trepidation, that I could survive and even enjoy trekking in them in Nepal. He was right. During our trip there I fell in love with the tiny Himalayan country. I subsequently returned seven times and, with a friend, helped our guide start a library in his remote village. Then I wrote a book about it all: A Balcony in Nepal: Glimpses of a Himalayan Village. Learning that I was tougher and braver than I had considered myself gives these now faded, worn pants a luminous quality. And besides my good feelings about myself, the pants remind me of happy times when Mark was alive and Nepal hadn’t suffered two catastrophic earthquakes.

West Sider Frannie Newman remembers the padded bra she wore on her first date with the man she would be married to for 35 years. “I completely misrepresented who I was,” she recalls, “but I was so self-conscious about being flat-chested that I kept wearing those bras until Twiggy burst on the scene and helped me feel better about myself. I don’t need to pretend I’m somebody else.”

A wardrobe includes more than clothing. In her new memoir, 9 1/2 Narrow: My Life in Shoes, Patricia Morrisroe

tells her life story through a variety of footwear, including her white Mary Jane shoes, the thick-soled brogues she wore with her Catholic school uniform, the ruby-colored patent leather heels she wore in defiance, the sexy ballerina-like Audrey Hepburn shoes that showed “toe cleavage,” and, finally, the snakeskin boots she bought just after the death of her mother. They made her smile because she could hear her mother’s voice saying, “Snakeskin? Are you crazy?”

In our book group a forty-something woman talked about her salmon-colored blouse and the day she realized that her mother’s advice never to wear that color because “you don’t look good in it” wouldn’t guide her fashion choices anymore; she now knows that she does look good in it. And she no longer speaks to her mother. Ilene, the mother of five children, was only twelve years old when her own mother died. She is especially close to her three grown daughters and she was pained to hear that three of the dozen women at the book group were estranged from either their mothers or their daughters. It was clear that these breaks were major issues in their lives since the clothes they brought all touched on those difficult relationships. In fact Ilene’s first book was in many ways a love letter to her mother, who had made many of Ilene’s outfits; it was also a way to grieve for her, almost fifty years later. As she writes in her book Mother of the Bride: The Dream, the Reality, the Search for a Perfect Dress, “No one will ever love you more than your mother. Not even your dog.” I empathize because I was close to my mother, Leah Wendkos, who sold dresses in an upscale shop in Philadelphia and always looked chic. And now I share clothes with my three daughters.

Even though clothes launched Ilene Beckerman’s writing career, they don’t define it. She went on to write and illustrate four more books, all of them about women’s concerns and emotions—our quests for love and for beauty and our relationships with the important women in our lives—our mothers, our daughters, our best friends, our grandmothers. In my last conversation with Ilene, she suddenly turned the tables by asking me a question: “You have your own sense of style,” she said. “What do you think about when you choose your outfit for the day?” No one had ever asked me that before and I fumbled through my answer. That night I looked in my closet and saw the multi-colored skirt I had bought from two self-proclaimed witches in a small upstate town, the tailored red suit I wore to professional events, the “distressed” jeans I bought because I liked the way I looked in them and the shalwar kameez I brought back from Nepal. I never before realized how much my clothes reveal the many aspects of myself.