Is this Swedish import a gourmet dining and shopping mall with photo exhibits attached? Or a pacesetting 21st century museum? 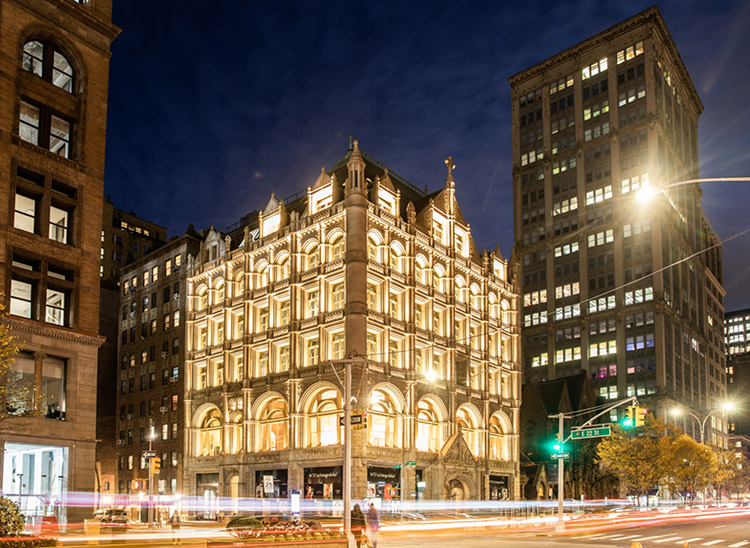 Picture-taking used to be reserved for special occasions. Today, it’s everywhere, inescapable. Thanks to smartphones, Instagram, Snapchat, Photoshop, et. al., we’re all inundated with photos as never before. So how timely it is that Fotografiska New York, the first U.S. branch of a contemporary Swedish photography museum, has just opened in a 45,000 square foot landmark building on Park Avenue South—inviting visitors to assess photography with critical scrutiny, and proposing which photos constitute art. 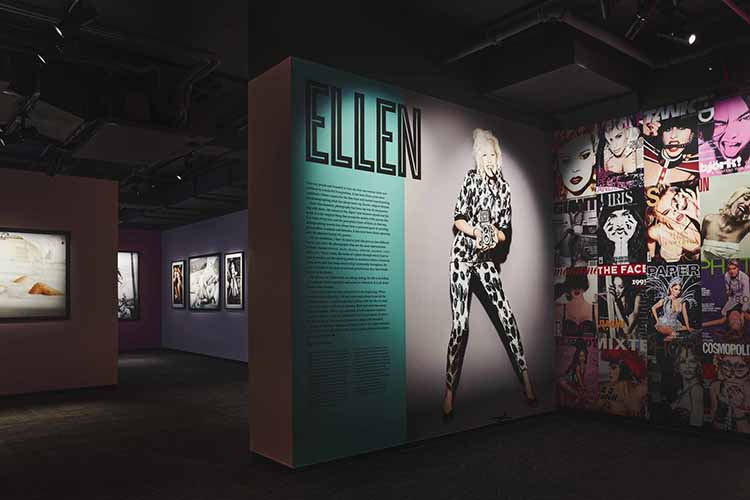 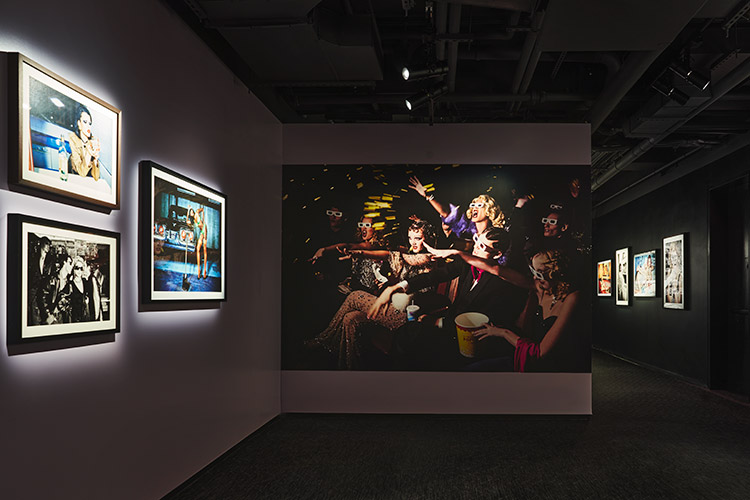 The five debut exhibits are very different from one another. Ellen von Unwerth’s Devotion! 30 Years of Photographing Women is the blockbuster among them, displaying works by the German fashion photographer from her start in the late 1980s onwards. She’s famous for her black-and-white retro-style Guess Jeans ad photos showing Claudia Schiffer in décolleté-revealing bra tops, and for shooting Madonna, Rihanna, Naomi Campbell, Rihanna, and Kim Kardashian, also in provocative, sexually obvious ways. Her posed images of liberated women, loosened up and typically outside the presence of men, was a welcome message von Unwerth brought to photography and gender relations. Undoubtedly she’ll draw crowds. Yet her pictures, as is inevitable with fashion photography, are in a time warp, hearkening back to more glamour-ridden times, when magazines were carefully scrutinized for clues as to where contemporary culture was headed. Those days are gone. (Maybe that’s the idea behind this exhibit, evoking a point in time.) 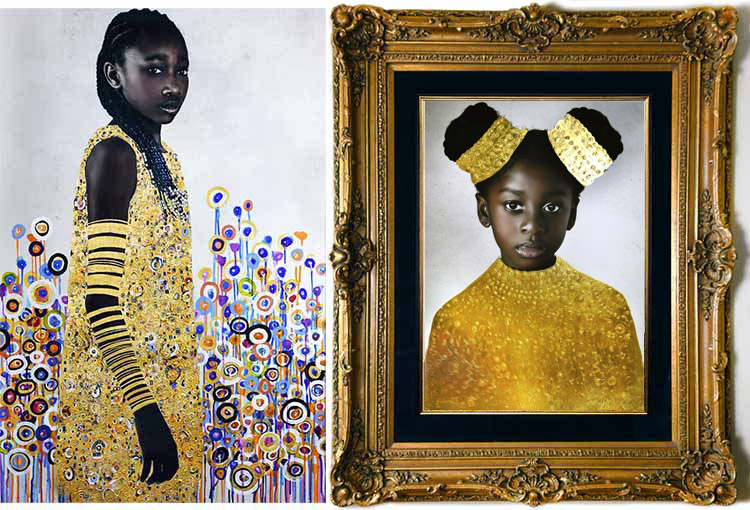 Particularly compelling for me is one of the other exhibits, showing portraits by the self-taught African American photography-based artist, Tawny Chatmon. She manipulates her photos as if they were canvases, embellishing them with antique patterns and textures; and if that’s not enough, she employs digital collage, adding splendiferous Klimt-like gold leaf, paint, and accessories evoking the grandeur of Grand Manner portrait painting—and burnishing her subjects in history. Many of those subjects are Chatmon’s own children (she’s the mother of three), their beauty, their family ties, and the dignity of their lives. Her works exude love and a haunting protectiveness. And in their ornate, antique-looking gilded frames, we’re encouraged to view them as an art form. That’s the premise here.

Also on display are riveting landscape photos by Helene Schmitz, a Swede, showing massive, savage disturbances in the world of nature, caused by wide-scale human intervention; studies of humanism vs. militarism in male identity in Israel by Adi Nes, a leading Israeli photographer; and works by the English-Swedish photojournalist Anastasia Taylor-Lind exploring relationships among immigrant children and their caregivers in New York City. 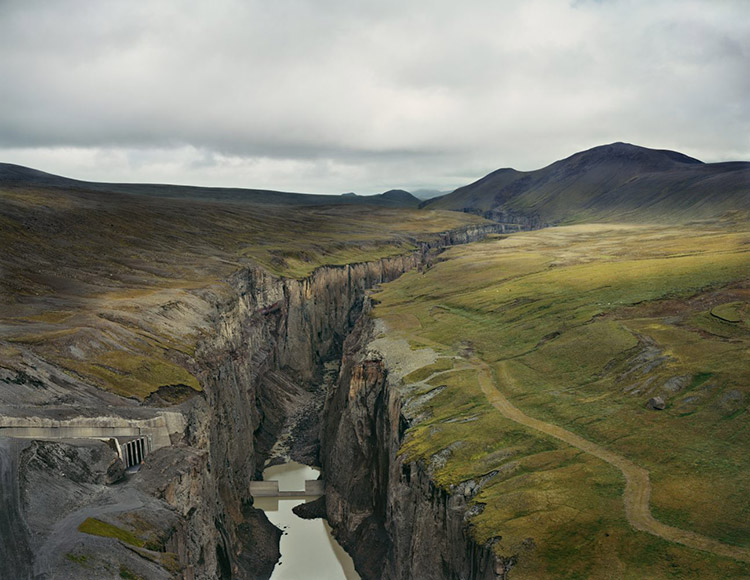 The brains behind this showplace are two brothers, Per and Jan Broman, who grew up surrounded by photography. Their father, a darkroom manager at Sweden’s largest newspaper, built a photo lab at home and hung photos on every wall. So imbued were his sons with the universe of picture-taking that early on in their careers they started a traveling photography fair—Scandinavia’s largest—before opening Fotografiska in Stockholm in 2010. It’s been a smash hit ever since, with more than four million visitors flocking to the exhibits, the restaurant, the cocktail lounge, the learning center.

But it’s not a traditional museum. Fotografiska’s rotating exhibits are selected not by specialist curators, as they are at most museums, but, according to the publicity materials, “are chosen by an international committee that consists of the founders, key stakeholders, and exhibitions’ directors …” Also different about this museum-in-progress: it does not having a substantial permanent collection. (That could change in the future.) 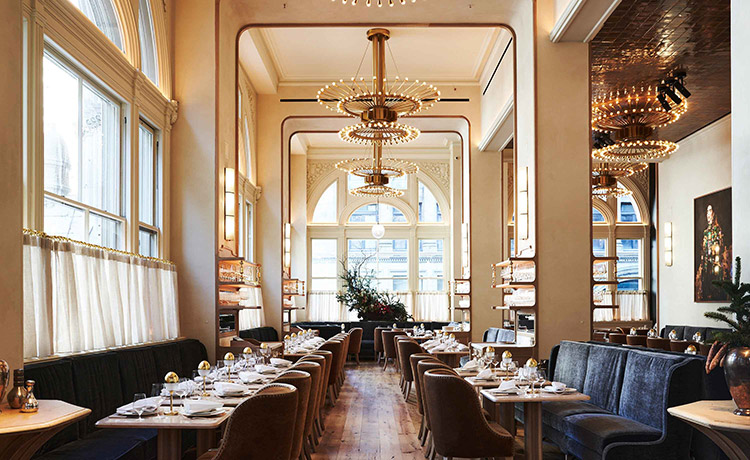 Several years ago, friends in Stockholm began emailing me about the original Fotografiska. They especially raved about the award-winning restaurant on the top floor and the gorgeous views of the harbor. Okay, but what about the exhibits, I asked? Oh yes, they were impressive, flooding their visual field. But what stunned them was the overall experience of roaming around the place.

After my first visit to Fotografiska New York, I’ve come to the same conclusion. It’s all-enveloping. The subtle color changes. The upholstered Louis XV Bergere viewing chairs. The nooks and crannies. The spotlit lighting. The sumptuous brasserie-on-steroids-style restaurant named Veronika, for the patron saint of photography, that looks like a transplant from vintage Paris or Prague. The “highly curated” gift and art book store with its own café, occupying the entire ground floor. The sofa-equipped cocktail lounge (in a former auxiliary chapel), where I wouldn’t hesitate to go for tête-à-têtes.

Extras like these raise a question: Is this a museum in the classic sense, or is it a photography-themed mall? If there were a struggle for dominance between the photo exhibits that are Fotografiska’s evident reason-for-being and the beautifully detailed, all-enveloping ambiance (developed by the New York team of Roman and Williams), then I’ve got to say…the ambiance wins. It’s anti-institutional.

Sure, plenty of other museums are guilty of turning valuable space into shops and restaurants. That’s how they survive. And as noted in the British Journal of Photography by Michael Grieve, a photographer himself who is a lecturer at Ostkreuzschule für Fotografie in Berlin, “Fotografiska is the model that many public museums have embraced, cashing in on their relatively newfound status as aspirational leisure destinations. The aim is to provide a more holistic visitor experience that encourages audiences to stick around, while finding new income streams to make up for the cutbacks from public funding, and the compromise of commercial patronage.”

But being privately-run, Fotografiska has financial backers who must certainly anticipate a return on their investment. 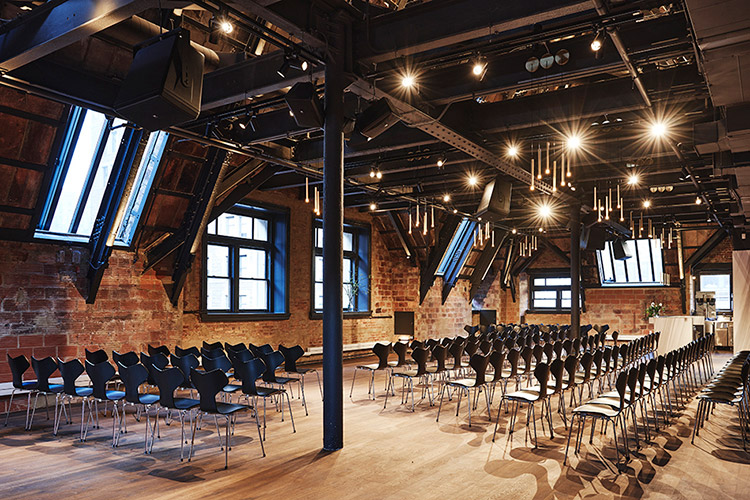 Fotografiska could nevertheless prove itself with the talks and lectures it’s planning for the garret-like space on the skylit top floor event venue. And in fact, all five photographers currently on display will be offering programs to be held January 16th—19th. Photography workshops would also be a welcome idea. As would themed exhibits, for example, corralling multiple photographers who focus on architecture, sports, portraits, cities, industry, etc., etc. And what about exhibits documenting the early years of photography?

New York already has a revered world-class photography museum: the International Center of Photography, which had its origins back in 1966 and which combines exhibits with research and teaching facilities, a library, an archive, and, yes, a gift shop and café too. What’s more, the ICP is about to open a comprehensive new headquarters on the Lower East Side.

Maybe anticipating invidious comparisons with the ICP, Per Broman describes his and his brother’s undertaking as “the equivalent of a hospitality experience …. A traditional museum can collect and archive; we want to inspire others to participate and contribute to a more conscious world.” Broman goes to far as to liken Fotografiska to the London-based Soho House, a see-and-be-seen members’ club for creative types. It’s “closer to us than a traditional art museum,” he says—wisely.

If you think of this place as an elegant but not stodgy members’ club, then the general admission fee of $28 ($18 for seniors and students) is a bargain, as is the annual membership fee of $150. What’s more, everyone’s welcome; it’s not exclusionary. Of course there’s no fee for roaming the gift shop, and no surcharge for visiting the restaurant or the cocktail lounge. But if you come just occasionally for the handful of changing exhibits, with no permanent collection to gaze at, then those entry fees are steep.

Now Fotografiska is mushrooming worldwide and becoming a brand. Its first branch opened in Talinn, Estonia earlier in 2019. Next came New York, with London and Shanghai outposts in the works. “The cultural differences of each location will be explored; we’ll let these differences blossom,” says Per Broman, adding that the New York location “will be a nice part of the palette of experiences available in that city.”

And certainly our city will benefit from having more than one photography center. What’s more, Forografiska will draw attention to the former Episcopal-run Church Missions House that it occupies—a glorious neo-Gothic structure dating back to 1894, its architecture recalling “the town halls of Haarlem and Medieval Amsterdam,” as one critic has noted. This new institution is also likely to become a magnet for its neighborhood: a limbo-land at the edge of Downtown, separating the dining and shopping mecca that is today’s Flatiron District from more genteel and residential Gramercy Park. My hunch? Fotografiska as a gathering place has the potential for turning this nebulous area into a cultural hotspot. In New York, that alone is quite an accomplishment, and a promising beginning for this museum.