New York’s quintessential eateries may be a vanishing species, but Eisenberg’s Sandwich Shop is one that has a knack for hanging on. 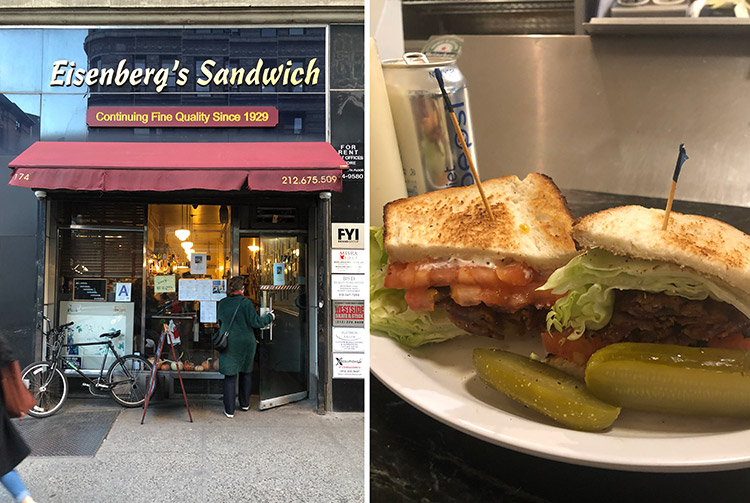 I’m a lifelong luncheonette aficionado. Never have I tired of a BLT skewered with a frilled toothpick and accompanied by a zesty sour pickle and pleated paper portion cup of cole slaw. And what could be better than consuming such a crunchy-smooth delight on a swivel stool, facing the short-order cooks in their jaunty Nehru-style white caps as they do their flipping on the grill?

But the luncheonette is an endangered species. We’ve lost so many: Big Nick’s on the Upper West Side, the Stage and the Kiev in the East Village, Moondance in Soho—to name just a smattering.

Instead we’ve seen the rise of faux luncheonettes, like the Empire Diner in Chelsea. I think of that place as one of the un-dead (like the Game of Thrones’ White Walkers). Formerly a people’s eatery, it went out of business, only to be resuscitated as a pricey, chef-run semi-gourmet spot with self-conscious décor. The Brooklyn Diner on West 57th Street is another—frequented by unsuspecting tourists who think it’s the real thing.

Perfect for eat-and-run solo diners or friends having an informal meal together, luncheonettes do made-to-order dishes, served by waiters or waitresses, and were and still are frequented by diners of all ages. While millennials value luncheonettes’ authenticity, it’s the pre-boomers and boomers, like me, who are the most loyal. We grew up nourished by luncheonettes. Trouble is, our numbers are dwindling. That’s a problem for the owners—that and rent hikes, plus the cost of maintaining short-order cooks and other staff while keeping prices down. Not to overlook competition from the corporate “bowl” joints—Sweetgreen and Dig Inn are two—serving coconut chip-festooned acai bowls—and from the slew of gourmet coffee shops (whose edibles are trucked in).

Surviving luncheonettes, by contrast, seem like time warps: The Capitol Restaurant in Inwood dates back to 1900. Little Poland is a favorite in the East Village, Eat Here Now on the Upper East Side, Manhattan Diner on the Upper West, the Mansion Restaurant on York Avenue, and the Waverly in Greenwich Village. The Lexington Candy Shop, on the corner of 83rd Street, founded in 1923, has wisely left its nostalgic interior and convivial staff intact. But—possibly recognizing that it has become “a destination”—this place has raised its prices to near-gourmet level. 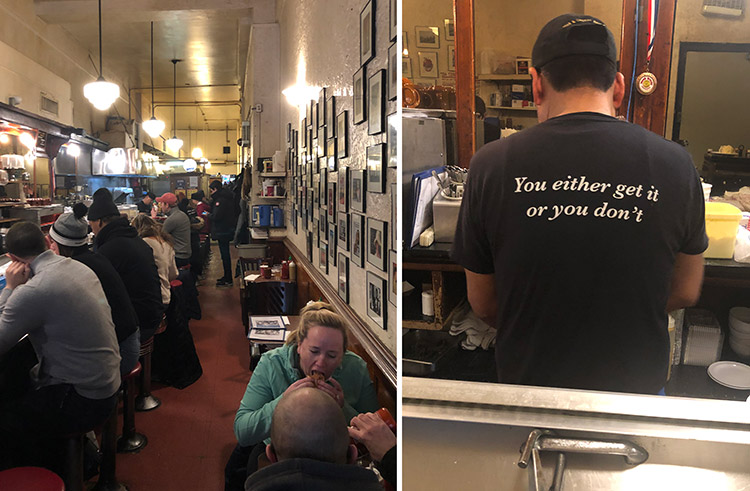 The luncheonette you either get or you don’t

My focus here is on yet another luncheonette—one that’s stellar by any measure: Eisenberg’s Sandwich Shop. It was founded 90 years ago by two brothers (surnamed Eisenberg) directly opposite the Flatiron Building, where it has remained ever since. That’s a vital location in an increasingly tech-and media-centric business district. The area is also something of a foodie haven, with New York’s original Eataly right across 23rd Street and the original Shake Shack prospering in that strolling green, Madison Square Park, just a stone’s throw away.

Marie Kondo would take offense at the helter-skelter décor, one poignant item being the Myers cast iron Bullet Mixer, its agitator draped with two mini-American flags. Like the nearby arrays of brown china coffee mugs and soda cans, the malted machine stands in front of the mirrored Belle Epoque wainscoting gracing Eisenberg’s front wall. The remainder of the décor is classic luncheonette, the walls covered with a hodgepodge of de rigueur framed photos of patrons and celebrities, posters, and announcements of menu specials. 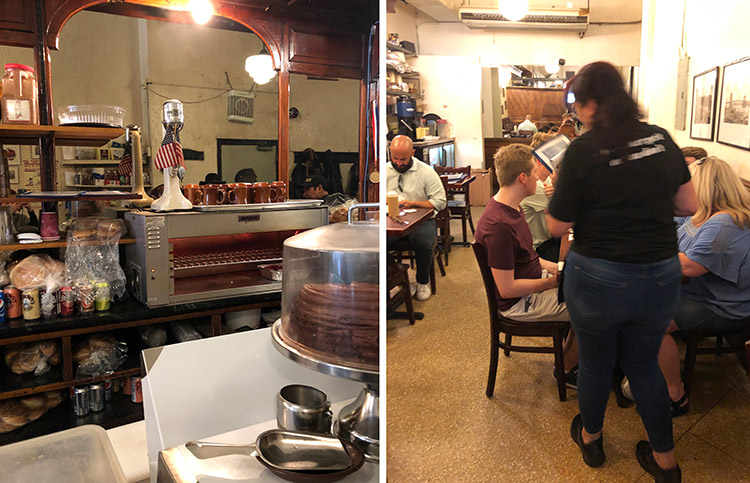 It all runs smoothly, which is hardly surprising. Some of the non-stop busy staff have worked at Eisenberg’s for over 20 years. They’re always good-humored and congenial, and possibly are at their calmest during the lunchtime clamor. “Their deft moves are as good as the choreography at the ABT,” says Jane Paznik-Bondarin, an Eisenberg’s regular.

In 2005, after a couple of changes in ownership, a longtime frequent customer, Josh Konecky, bought Eisenberg’s. A benign overseer, he introduced his mother’s chopped liver (the recipe, at least), along with avocado, Americanos, and lattes. Hey, this place can be accommodating. But wraps and vegan selections have yet to appear on the menu. Nor have soybean sprouts or kimchi. They would be sacrilege.

In 2018 a new owner, Warren Chiu, took over the lease, which doesn’t expire until 2027. Chiu is VP of Development of his family firm, Warwick International Hotels, which means he’s already steeped in the hospitality industry. That bodes well, as do rumors that he’s planning structural refurbishments, leaving Eisenberg’s otherwise as is. “You can see the customer loyalty is immense at this place,” he is reported as saying early on in his tenure. “I’m the new owner officially, but I feel like the customers here are the real owners. I think I’ll have to consult them for any changes I have in mind.”

There’s a second Eisenberg’s motto, posted in its front window: YOU EITHER GET IT OR YOU DON’T. Exactly.

“Reassuringly homely even after a 2017 renovation, the Murray Hill Diner is a cozy staple at Lexington and 33rd Street, where you can get anything from a superb fish dinner to excellent omelets and other diner fare, says Roberta, a local writer who requested semi-anonymity for this quote. “The place is packed at lunchtime; I’m guessing the feng shui has something to do with it—the casual assortment of tables and booths, the luncheon counter, the prints of Old Murray Hill—as well as the fact that there is no other coffee shop nearby. Waitresses from central casting take your order and will remember you next time. My longtime favorite order is the whole grain waffle with yogurt, berries, and walnuts, which, with coffee, tax, and tip, has gone from $14 to $20 in the blink of an eye.” 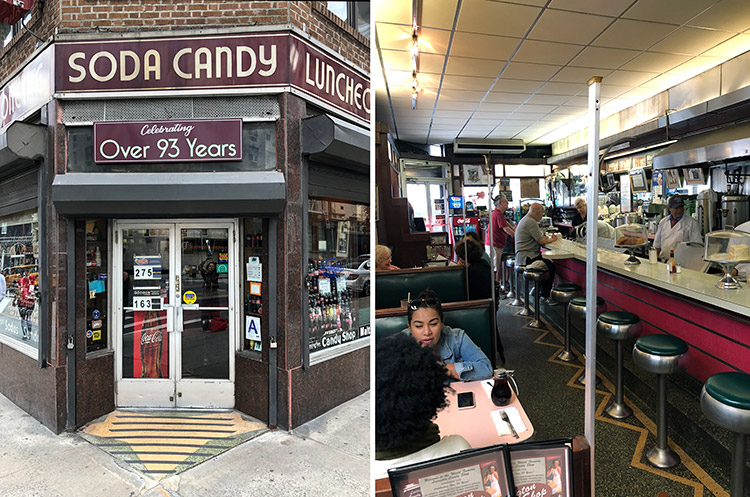 Judith Norell, an Upper West Sider who switched from a career as a concert harpsichordist to opening, owning, and overseeing the Silver Moon Bakery on Upper Broadway, points to three local luncheonettes: “The 24/7 Metro Diner, Manhattan Diner, and City Diner are considered New York institutions. They look alike, they act alike, and are ten blocks from one another. They serve the same food (although some claim the coffee at City Diner is better), and they are a source of constancy and comfort to many New Yorkers, famous and unknown. The waiters are friendly, the food is what-is-to-be-expected, and the booths are a comfortable home away from home to their regulars. Not noisy, not fashionable, but ‘eternal’ in a strange New York way. City Diner’s owner/manager has been there for over 30 years and doesn’t plan to leave. The never-ending cup of coffee, the reasonable prices, the glossy plastic coated menu–all invite us to return regularly, making it a ‘destination’ for many of us.”

Lisa Safir Barness, a personal shopper and lifelong Upper East Sider, cites Viand, across the street from Barney’s; Nectar Cafe (On the corner of Madison and 79th) and 3 Guys, further up on Madison Avenue; and, further east, the Lexington Candy Shop and Neil’s Coffee Shop, as “classics.” It was at Neil’s that Safir Barness, as a teen, frequently joined friends for Saturday morning breakfast. Her daughter does so today, with her friends. “The tradition lives on! These spots are the true originals from an ancient era quickly disappearing! All of these places actually know what an egg cream is! Damn, I sound SO OLD!”

Gary Paul, an architect based on the Upper West Side, has his own fond memories of Nectar Cafe. “Literally a hole in the wall on Madison and 79th Street, this little diner has the best fresh turkey sandwich in town. The carving takes place constantly, and the home cooking is genuine. It’s not inexpensive, as the rent in the ’hood is high, but it’s a step above the generic diners and far less expensive than the fancy eateries of the neighborhood.”