A jam-packed exotic antiques store downtown and a singular pharmacy uptown have a lot more in common than you could possibly imagine.

It’s a blight on New York. Shop after treasured mom-and-pop shop—closed, all over town. Blame it on the e-commerce explosion. Blame it on astronomical commercial rent increases. Whatever the causes, neighborhood after neighborhood in our city has lost more and more of the cherished retail stores that have long been an integral part of our teeming city’s street topography.

But for those of us seeking to save our retail environment, for those who still welcome not just a pleasurable shopping experience, interacting with other human beings in real time, but one that’s serendipitous, with out-of-the ordinary discoveries—we’ve still got options. They’re found in longstanding survivor stores with a track record not just for giving customers what they want, but for stocking oddball wares that the hunter-shoppers among us take delight in. With luck, or foresight, or having the right landlord, they’ve remained in business.

Below, I’m profiling a couple of these stores. Very different in the goods they sell, they nevertheless have a lot in common. In operation for at least several decades, both are destinations, stocking goods you won’t find elsewhere—not even online. Remarkable in itself, neither has a website. You’re expected to visit them. Both are independently owned and operated—by New Yorkers committed to keeping them running. Even their physical space is catch-as-catch-can. Speaking of which, with their narrow aisles, they’re jam-packed with merchandise that practically spills form the shelves. You almost have to shimmy your way through them. 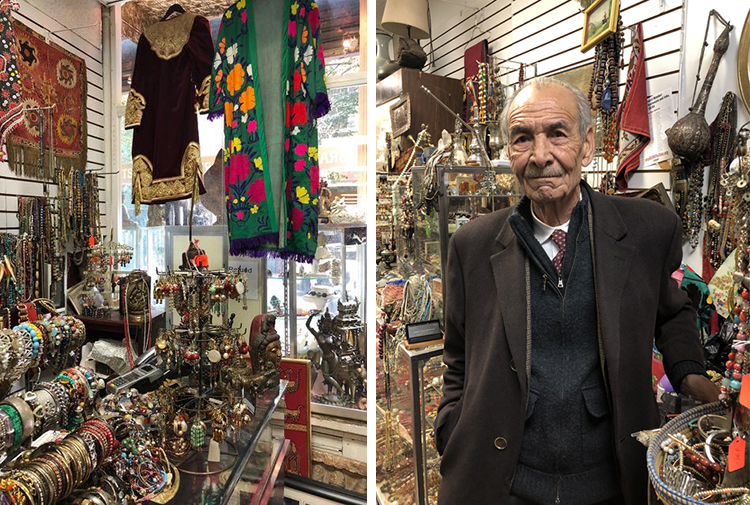 It’s especially tricky maneuvering inside the long, almost impossibly cluttered obstacle course of exotica that is Nusraty Afghan Imports. Walking two abreast? Impossible. Lining the floor are bowls of Deco-era beads from Germany, Austria and Czechoslovakia, along with loose lapis and turquoise stones, African trade beads and red cornelian beads from Iran. Inside glass cases lie shelf after tantalizing shelf of 1920s costume jewelry from India; Afghani silver repoussé cuffs and ornate necklaces; chunky Polish and Russian amber necklaces; jade bric-a-brac; wooden, stone and bronze Buddhas; and ancient Roman glass. A vividly colored Nigerian beaded chair beckons halfway through the store, while pinned up on the wall are a mossy green Afghani dress with ornate gold embroidery, as well as Arabic, Iranian and Tibetan paintings. Make your way to the back (carefully), and you’ll discover a stash of Afghani, Uzbeki, Tajik, Kazak, Turkish, Iranian and Moroccan rugs, and thousand-year old tapestries from India and the -stan countries

Such helter skelter bedazzlement is routinely found inside Marrakech’s Medina or Istanbul’s Grand Bazaar—not one block west of the subway station on Sheridan Square. But here it is, a long and narrow phantasmagorical hodgepodge with wares from 28 countries. 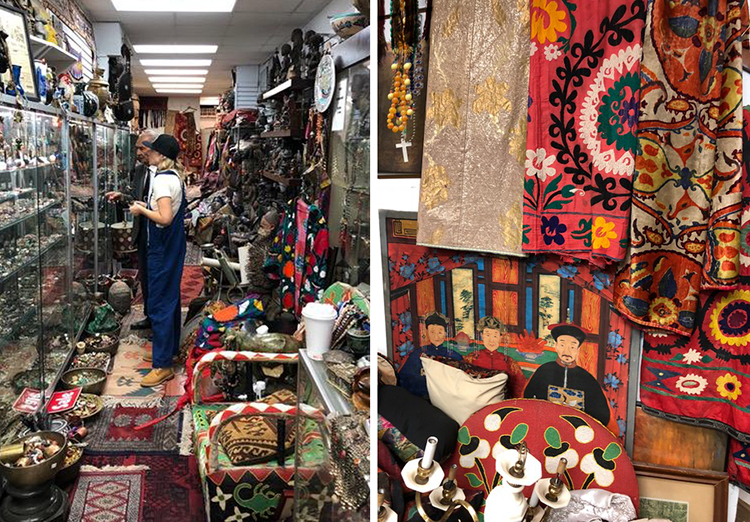 The owner, Abdul Nusraty, has ample relocating experience. His previous shop was in a roomy Bleecker Street corner space. There for 32 years, his was one of the charmingly laid back family-run shops that made the neighborhood alluring—in fact so alluring that Marc Jacobs opened several nearby retail stores. Other corporate businesses followed, and soon enough, rents all along Bleecker zoomed, in Nusraty’s case from $3,250 to $7,500 a month. He was forced to move. A short-lived Brooks Brothers Black Fleece outpost took his place. Now a mall-style Accessorize chain store sells faux fur bunny slippers there.

Fortunately, Nusraty landed nearby, though in a far smaller and narrower Christopher Street storefront. His latest lease has now expired, but his landlord is allowing him to remain through the end of the year. That’s his current, tenuous situation. 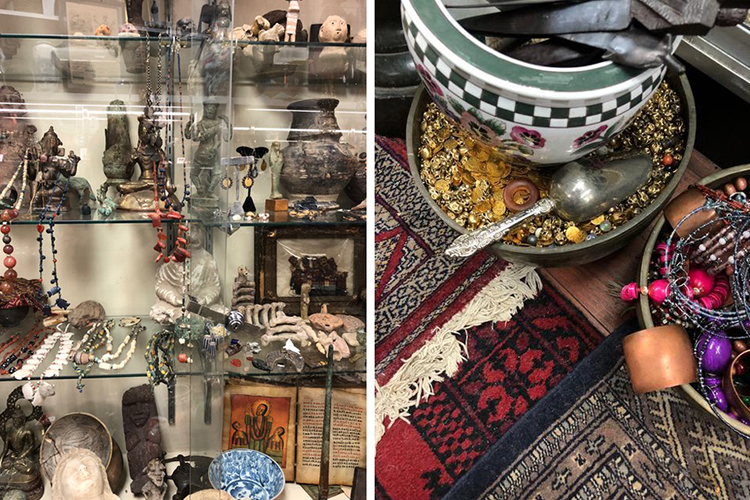 Trained as a mining engineer, with an astute eye for quality and design, Nusraty ran a multi-million-dollar jewelry business back in his native Afghanistan. When the Communists took over in 1978, he and his young family fled to New York. Maintaining his prized global sourcing and scouting contacts, he opened up shop on West 10th Street before making his two subsequent moves. Through them all, Nusraty has kept his devoted clientele that includes interior designers, artists, collectors, and gift-givers.

As for his prices, they’re considerably lower than other antique dealers’, beginning at under a dollar for semi-precious stones and beads.

Now in his mid-70s, typically wearing a suit, vest and tie as he runs his shop seven days a week from noon–7 p.m., Nusraty is intent on maintaining his business—and new customers certainly will help keep it going. At heart, he remains a Western Asian tradesman. Assessing and selling precious wares are in his blood. That’s the mindset and skill he’s brought to New York. Our eclectic city is richer and more multifarious for his and his shop’s unique presence. Nusraty Afghan Imports, 85 Christopher Street. 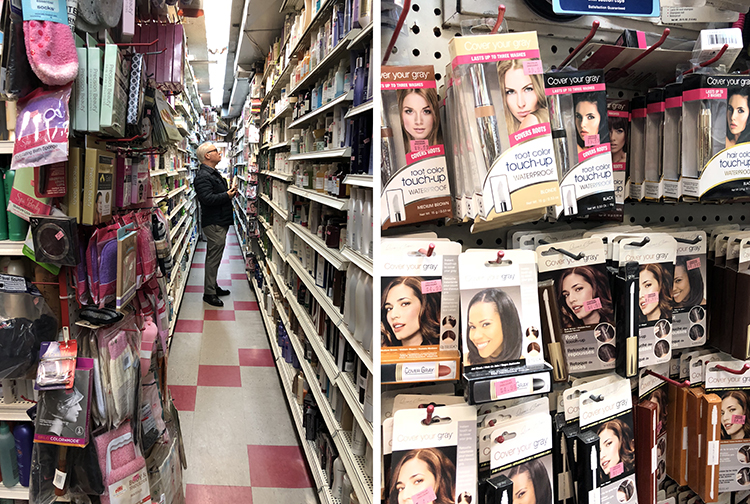 Further uptown, you’ll find two branches of a drug store that’s not only a far cry from Duane Reade and CVS, but is unlike just about any other independent pharmacy in all of New York.

I’m referring to Pasteur Pharmacy, with branches on 34th Street in Murray Hill and on Lexington Avenue in Bloomingdale’s territory. Both are owned and lovingly run by two pharmacists, Leon Tarasenko and Steven Schimmel. The uptown branch recently acquired the records and prescription files of Newton-Timmerman, the old-time drugstore across the street which recently ceased operations. So that Pasteur location has expanded its name to Pasteur Pharmacy/Newton-Timmermann Pharmacy.

The prescription department, at the back of each store, not only dispenses pills in standard plastic vials, but offers a service that’s extremely rare today: Compounded custom formulas, prepared in-house. In the old days, compounding was the way pharmacies operated. Today, it’s rare, but Pasteur does it—and delivers too.

What hits you the moment you arrive are the long aisles, every inch of space teeming with a barrage of just about every esoteric grooming and beauty product and accessory imaginable. Many of these products are imported from traditional and obscure European manufacturers you might’ve thought went out of business decades ago: From Portugal, Claus Porto and other bar soaps in charming paper wrappers…Myrugia Maja patchouli-and nutmeg-scented dusting powder, introduced in 1921, from Spain…all-natural citrus-scented Olivella Bath & Body Gel, derived from pure virgin olive oil, from Italy…Santa Maria Novella Acqua di Gigli, an invigorating after-bath botanical body rub, also Italian…a wide range of high-grade Janeke (Italian) and Swissco (Swiss) makeup mirrors…beautifully designed Denman hairbrushes, from Ireland…hard-to-find Revlon Professional hair products…Botot French toothpaste, formulated in 1755.

Pasteur’s specialty is artisanal, hard-to-find men’s grooming and shaving supplies, with brand names like Truffett, Williams, PAA Doppelgänger, Omega and Noble Otter. Here’s the spot for Southern Witchcrafts eau de cologne (not necessarily only for men); Semogue badger and boar shaving brushes, from Portugal; gift razors with faux-ivory handles; and multitudes of bay rums and even a beard wax from Scotch Porter, in East Orange, New Jersey. Several times a year, Pasteur has hosted get-togethers, where up to 100 men convene to exchange views about shaving.

Sure, you can buy pretty much all the above products on Amazon, where you’ll have to point and click for them by name. Here, as at Nusraty, you discover them in person, by happenstance, while leisurely strolling the aisles. Isn’t that part of the pleasure of shopping? 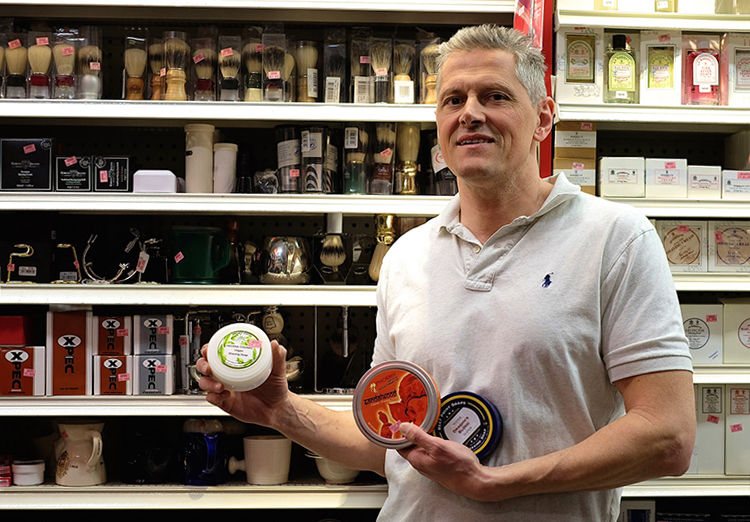 This unique drugstore started out as a surgical supply vendor in the mid-1930s, when it was known as Radoff Pharmacy. Tarasenko and Schimmel bought the business in 1989, changing its name to Pasteur. And while they were at it, they bought the premises too. “We decided that was the only way to survive in Manhattan,” Schimmel explained. Owning the real estate they occupy has given the two what here in New York is a shopkeeper’s utter luxury: running the business (to be specific, the over-the-counter portion of it)—as idiosyncratically and off-the-cuff as they wish. Not having to worry about rent increases, they take inventory risks. They’ve evolved organically, which has given them the liberty of remaining authentically old-fashioned. That’s a freedom far too few independent shopkeepers have today. Pasteur Pharmacy, 606 Lexington Avenue and 53 East 34th Street.