With a tribute to the perkiest of the perky blondes, the recently departed Jane Powell 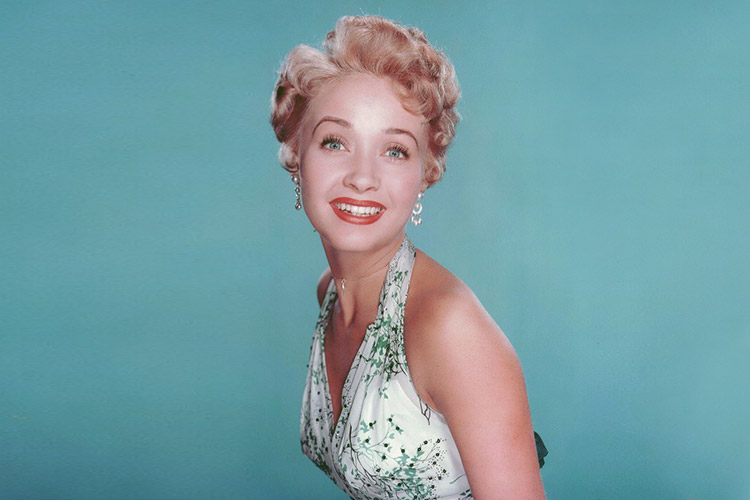 In the spring of my tenth year, a movie called Lili opened at the Bijou. It was a beguiling story, set in a French village but shot in Culver City. I was a skinny little thing, nowhere near ooolala or Lalaland. I had big brown eyes and a pixie hairdo. I was in fifth grade, studied French, played the piano, and attended Saturday morning dance classes taught by a protegée of Doris Humphrey. That was New Haven in 1953.

“She looks just like Leslie Caron!” my mother’s friends said about me. The dark hair! The eyes! So petite! Such a gamine! So we went to see the movie, and Voila! I did resemble Leslie Caron, sort of. I had never resembled anyone else on screen before, and my bony body suddenly looked interesting. I felt almost sophisticated, if sophistication can be applied to the waif that was Lili. My hair was shorter and shaggier than hers, but the rest was close enough. And just like Lili, I fell in love with Mel Ferrer, the irascible puppeteer—a conflicted man of tenderness and rage, an irresistible package who would, in fact, affect my future taste in men.

Six months later came Roman Holiday. At eleven, I was still skinny—or thin—with big brown eyes and shaggy hair. I still loved French and dancing, and I was now the accompanist for my school’s Junior Glee Club, which no sixth-grader had been before.

“She looks just like Audrey Hepburn!” my mother’s friends said. The hair! The eyes! Petite! A gamine! So we saw that movie, too, and I did resemble Audrey Hepburn, sort of. I felt almost elegant. But I didn’t fall in love with Gregory Peck. I couldn’t. I was still in love with Mel Ferrer.

So, it turned out, was Audrey. A year later, she and Mel were married.

I forgave them and moved on. When Seven Brides for Seven Brothers bounded onto the screen in the summer of 1954, it twanged my heartstrings and changed my tune. I loved the songs and soon had the record and sheet music. But more important than the score was the star. Still impressionable but no longer needing to identify with a sprite, I expanded my cinema scope. While I felt no tug for any of the seven red-headed brothers, I was enchanted by Jane Powell. Jane Powell? No one in the family understood why. There was no why. She was blue eyed and blonde—a blondness that some considered bland, but not me. She was perky and spunky and the girl next door. But it was her musicality that charmed me more than her spunk. She was a soprano with operetta-inflected arm extensions and other MGM-musical mannerisms that some would call cloying. We had nothing in common. But I loved her.

I hadn’t seen her previous triumphs—A Date with Judy, Nancy Goes to Rio, Two Weeks with Love, Royal Wedding, and such. But I would. 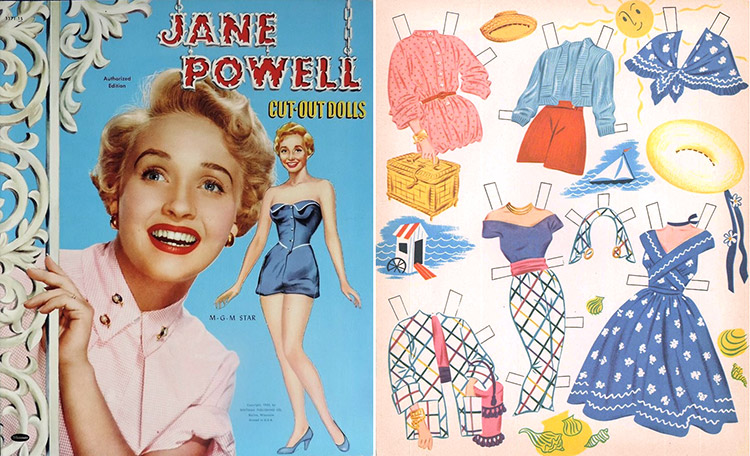 In the meantime, there was Jane the paper doll—along with her sister stars—and I found heaven at Woolworth’s.

I can still see the array on the racks, each 15-cent cut-out book featuring “2 Statuette Dolls”: the perforated actress in one pose on the cover and another on the back. I can still smell the paper, still remember with what restraint I guided those scissors around the Daytime Clothes! Play Clothes! Party Clothes! Clothes that would garb these screen gems. (Who designed the frocks and swimsuits, aprons and stoles? Surely not Edith Head or Orry-Kelly.) I disliked but preserved the tabs that hung the clothes on their shoulders. My friend Helaine, more style-savvy than I was, snipped them off and replaced them with tiny magnets and pins.

Before long, I climbed a rung in another category, as well: literature. . . advancing from comic books to movie magazines. Goodbye, Little Lulu! Hello, Hollywood! Lifting my gaze to more mature reading matter at the corner drugstore, I collided for the first time with scandal and muck. I was intrigued by Lana Turner’s marriage to Lex Barker, rattled by Susan Hayward’s divorce from Jess Barker, happy for Debbie and Eddie, in thrall to Hedda and Louella.

But I was really there for Jane. Modern Screen (20 cents), Photoplay (20 cents), Motion Picture (15 cents) . . . if she was on them or in them, I bought them. I knew their delivery dates and was at the drugstore’s door on the right day every month. I cut out her pictures and glued them to a huge poster-size sheet of paper tacked to my bedroom wall.

Up went a sheet for Audrey, and another for Leslie (who was harder to find), and from then on, every movie I saw provided another collectible. My first Hitchcocks—Dial M for Murder and Rear Window, both in 1954—brought Grace Kelly into the room. My first visit to Radio City Music Hall—The Student Prince, also in 1954—delivered Ann Blyth. Downstairs, I lived at the piano. Upstairs, I lived in a scrapbook. When my budget pulled me back, I settled for the Lustre Crème ads in my mother’s Good Housekeepings and McCall’s, although few stars who endorsed the shampoo held a candle to Jane.

My younger sister preferred books. She played the cello, sewed her own dolls’ clothes, and had no interest whatever in Louis B. Mayer’s stable. But I nagged. Because our mother’s name was Doris, I was able to convince her to take an interest in Doris Day, none of whose movies we’d seen. Because I was desperate, I convinced her that she liked Doris Day. . . and that she liked her enough to collect her. I was so bossy that I even got her to fork over some of her allowance on a magazine I would choose every month that, yes, contained a photo of Doris Day, but also contained an Audrey, Ann, Grace, or Jane. 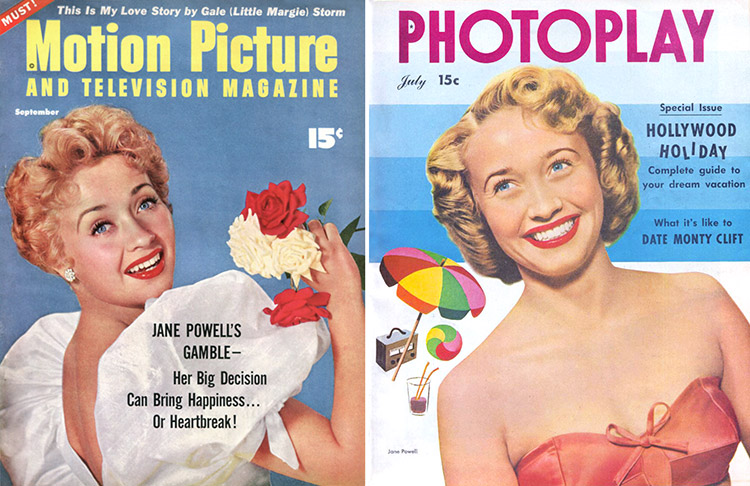 Through the years, Jane kept busy as a bee. She sang at Harry Truman’s inaugural ball in 1949 and at the Republican National Convention in 1956. She and Elizabeth Taylor served as bridesmaids at each other’s first weddings. She did radio, television, Broadway tours. She replaced Debbie Reynolds in Irene on Broadway itself, but couldn’t do a thing for Sondheim’s Bounce, which never did appear on Broadway itself.

A few movies followed Seven Brides: Hit the Deck, Athena, The Girl Most Likely—but none hit the same peak for me. Jane had lost her spark, it seemed. For me, but not for men. Out in Brentwood, she stepped lively and married five times. I followed her nuptial moves, too, from her first mate (Sonja Henie’s former skating partner), with whom she had two children. . . to the second (Mona Freeman’s former husband), with whom she had a daughter. . . to the third, fourth, and last (the former child star Dickie Moore).

As my life evolved, along with my taste in movies, Jane remained but a glossy memory. Until one day about seven years ago, I read that Dick and Jane were living in New York. My town! They had an apartment at Lincoln Towers—and she exercised at the West Side Y.

She had just finished a body-conditioning class when I saw her that morning, in a black leotard and tights, emerging from one of the large workout studios. Jane Powell alone! She was in her mid-eighties then—prettier, blonder, more petite than on screen, and far more exquisite than any paper doll. With age had come a more delicate beauty. I saw her and my heart raced, with only a second to decide: should I or shouldn’t I?

I did. I introduced myself and all but curtseyed. I offered my hand, and she took it. I told her that I’d adored her for years, that I had had her paper dolls and a gallery on my wall, and even now a framed publicity shot that my daughter had bought on eBay. “Thank you, Ellen!” Jane said (my name in her mouth!). Unable to stop blithering, I said I’d read her autobiography and hoped she might consider doing another book one day, something about MGM musicals maybe.

My eyes asked why.

Away she went, and then she went even further away. After Dick Moore died in 2015, she left New York for Connecticut. But she still had friends in town.

Recently, one of them offered me her phone number. It had nothing to do with my Powell infatuation, but with a book I was writing about a fellow she knew, the caricaturist Al Hirschfeld (See our review of Ellen Stern’s biography of Hirschfeld –ed). I’d already interviewed hundreds of celebrities in his orbit, and here was my chance to speak with Jane Powell officially, justifiably. I would never reveal that I was the fawning fan who’d approached her at the gym. I would ask her a few questions and knew she’d be cordial and articulate. But I decided not to.

I’d displayed her on my wall, and met her in the hall, but I couldn’t make the call.

There are just some things one doesn’t do.

Her death this past September grieved me, of course, but I was hardly inconsolable. I’ll always have Seven Brides in all its iterations. . . and the relief of knowing I didn’t, ultimately, embarrass either of us. 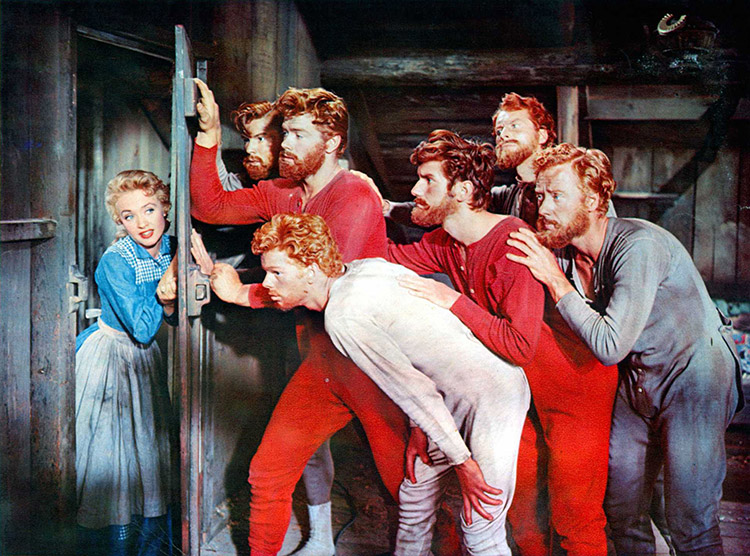 Ellen Stern is a writer and editor who worked at New York magazine, GQ, and the Daily News for many years. She is the author of Hirschfeld, a biography of Al Hirschfeld, and Gracie Mansion: A Celebration of New York City’s Mayoral Residence.

You may enjoy other stories by Ellen Stern: Day of Reckoning, Out of the Closet, Safe on Second: A New York Story,  Murphy and Me and Household Effects: an Illustrated Inventory