Living in a second-floor apartment in New York City has its ups and downs. 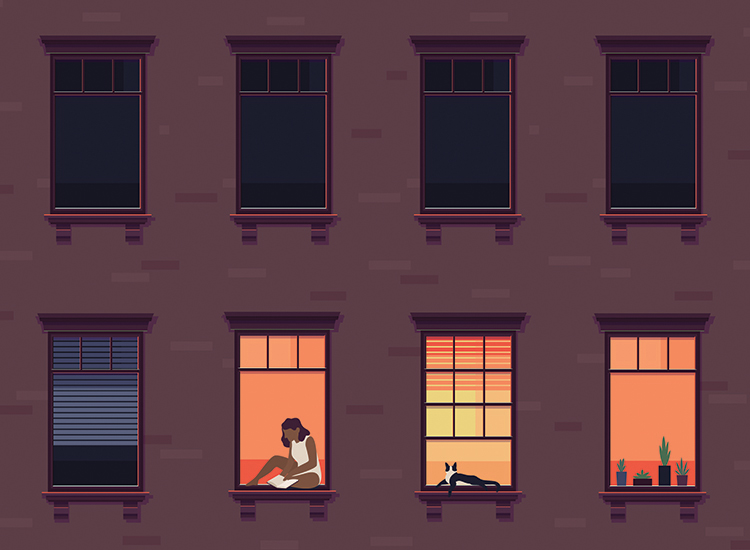 The minute we saw it—lit by sunshine pouring through sixteen windows—the first apartment we smiled upon seeing after nine months of not smiling—we knew this was the one, this Classic 6 with beams, moldings, high ceilings, and a fireplace, only a block from the park and two from the crosstown bus. My husband Peter, our young son Charley, and I had been living in an exquisite garden apartment which we’d outgrown; before that, separately and together, we had lived in a brownstone with a bay window, a white-brick monolith near Times Square, a Deco studio above a courtyard, a shabby flat above a fancy bakery. Now we were here.

It was our first time on a second floor and we loved it, this home with its ups and downs.

An up? Proximity to the ground. When Charley and his little sister Katie operated lemonade stands and toy bazaars on the sidewalk directly beneath our bedroom windows, we didn’t worry. Not only could we see them, we could oversee them. If we heard our phone ring, we could usually make it upstairs in time to say hello. When my husband forgot his baseball cap or I forgot my key, the other would just toss it down. We could wave to a play date arriving and a dinner guest departing, watch a movie shoot on the opposite corner, shout to the school bus driver, “Here we come!”

A down: You’d think such a location would mitigate against catastrophe—such as a fire, which we figured we’d survive by grabbing the kids and leaping to the ground—which never, thank goodness, happened. But one despondent neighbor found a way to use his open window to another end. If necessity is the mother of invention, determination is the mother of non-intervention, as he proved by dropping out his second-floor window one day—managing even from there to kill himself.

An up: the elevator. We could scamper up the stairs without waiting until it descended from 17.

A down: Because we rarely rode, we knew fewer tenants than others did, thereby missing essential gossip as well as posted notices about water shut-offs, gas-line repairs and Thursday’s tenants’ meeting in the laundry room. Just today, when I did ride because I was lugging three heavy bags from Trader Joe’s, I learned from a guy on 16 that a favorite co-tenant was hit by a truck last week.

An up: When the windows were open and I played the piano—Bach or Bernstein, Rachmaninoff or Rodgers—passers-by often called to me saying lovely things, and some even applauded.

The downest down: One summer morning, a small chunk of something fell to the sidewalk (no injury). Within hours, a scaffold and high wood fence went up on one side of the building—on the second floor. Whether it went up to protect a pedestrian from decapitation or the landlord from litigation, tenants were told only that the situation would soon be fixed and “pointing” would be done to the façade.

In came the bricks and shovels, pipes and tarps, buckets and brooms. This wooden scaffold would be the staging area for workers and equipment to reside just outside our windows.

For three years, the workers rarely appeared. But the scaffold and its furnishings stood firm. Then one day, additional planking went up on the avenue side of the building. Since our apartment is on the corner, we were now entirely engirdled—and introduced to a unique form of urban claustrophobia.

Away went our view, our privacy, our security, and the window boxes my husband planted with geraniums and impatiens every spring. The fence diminished our outlook, in every way. We could no longer see the street or sidewalk. With no barbed wire atop the fence (because of “fire laws”), we were vulnerable to any creep who climbed aboard our wooden deck—where he’d be perfectly concealed from view—and into our home.

(An up: Since our schnauzer hates the rain, the scaffold served as a giant umbrella…its only benefit.)

But the raccoons romped free. They nested in the space between planks and woke us in the middle of many summer nights as they humped, mated and chirped in ecstasy right outside our bedroom windows. They scampered around even in daylight. And there was no recourse. As raccoons are protected by law, trapping them would require a license from the New York State Department of Environmental Conservation.

The workers were not men for all seasons. Often, they played hooky. They’d come and go, guffaw and curse. They were having fun. They’d shout down to a guy in a truck, up to a guy on the roof. They ate their bagels and tossed their coffee cups to the scaffold floor. And as they strutted around out there, mere feet from us at our computers and stove, they looked in. But no matter what part of the building they were working on—front, back, top or bottom—nothing changed for us. Wherever they were, their platform continued as a repository for tools and debris. And since we weren’t allowed out on the platform, we couldn’t even wash our windows.

One very special night, we revolted: November 4, 2008—the election of Obama. Opening the windows wide, we climbed onto the platform, lifted our glasses and joined the jubilation. It was better than any Fourth of July or New Year’s Eve. It was a triumph. In every sense.

When the city battened down as a serious hurricane threatened to throttle us, it occurred to me that our outdoor dilemma should be addressed. Shouldn’t the stuff be removed or tied down? One would think so, considering the clear and present danger of their wind-tossed shovels vs. our glass windows. But no one took a step. As it happened, the storm was a washout and we were lucky.

But our plants and indoor trees were suffering from the possibly toxic dust. And our pet hamster died of a cancer that the vet had never seen before. So how was it affecting the tenants? (The workers wore masks.) And what about the long, open trough that filled with rainwater, becoming a splendid breeding facility for mosquitoes? It took five players—from super to handyman to landlord to scaffold guys—to empty the trough. But only because I mentioned West Nile virus and malaria.

And on it went. In Year Six, the façade was accessorized by a vertical scaffold dressed in blue veiling, which provided no purpose I could determine: a veil to no avail. It hung there for a year or so.

According to those who know these things, it’s legal to renew a platform “until the job is done.” But the job wasn’t done and wasn’t done. For a solid decade, the platform and its fence blemished our building and vexed our lives. Until it didn’t. One morning, I looked out the window and saw a new crew…dismantling the scaffold. I toasted them with my coffee. I asked them to pose for pictures. I thanked them much too much. We were liberated, back to life alfresco and the passing parade!

I no longer took the air and space for granted. I appreciated the light I hadn’t realized was so diminished. And there was another surprise, too. Suddenly I heard the sounds of outside with stunning clarity. The toots and honks, the laughs and barks, the small talk and big talk, the pizza guys’ bike chains clanking around the No Parking sign—muffled for so long by planks and fencing—were louder, sharper and more present than they’d been for ten years. I no longer raged at the sirens and car alarms, idling trucks, garbage removers, Con Ed diggers and demolition derbies that had so beleaguered me pre-scaffold.

Several months later, my life changed in a much more significant way, and I now go to bed with a hound, not a husband. But while I’m lonely, I’m never alone. And, thanks to the ambient glow of headlights and lampposts, I’m never in the dark.

I welcome every bell and whistle, every voice. I even welcome the occasional puff of cigarette smoke wafting through an open window. What I really welcome is the company. Serenaded by strangers, I am part of the world. An accidental eavesdropper and snug as a bug in a rug.

You may enjoy other stories by Ellen Stern: Murphy and Me and Household Effects: an Illustrated Inventory