Every dog has her day, and I have it with her. 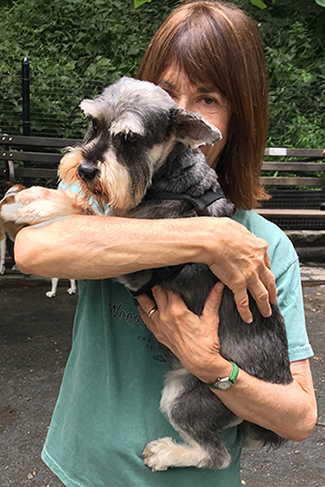 In childhood, it was a Cocker Spaniel who licked my toes, stole my socks, and chased my bike. In marriage and motherhood, we had a black kitten and then two more. But when the cats introduced asthma to our lives—and we just couldn’t snuggle up with goldfish, newts, and hamsters—we knew what we wanted. A frisky, dander-free dog.

Maybe a mutt, something scrappy with a black eye and ruffled tail right out of Our Gang, that we could rescue from the ASPCA. Or a German Shepherd, like Rin-Tin-Tin. Or a Collie, like Lassie. Or a St. Bernard, like Nana.

Alas, heroic reference was out of the question. My husband, kids, and I lived in a Manhattan apartment, so our dog would have to be smallish. And hypoallergenic. So just as wise consumers do before buying a laptop or Winnebago, we did our research. We learned the difference between hair, which doesn’t shed, and fur, which does. We consulted friends, books, allergists, and Google. Surrounded by pictures and total agreement, we fell for the Miniature Schnauzer, a terrier known to be friendly, energetic, protective, curious, and smart.

We bought city papers and suburban papers (this was in the ’90s, when the news still came in print), and where did we find the dog ads? Not in the classified section. Not in the entertainment section. But in sports, right after Automobiles and Boats.

We drove out to The Pup Tent in Queens, which referred to itself as a puppy nursery and exhibited its overaged, overpriced wares in shabby playpens. And over to The Wagging Tail in Fort Lee, which charged for a small pooch what Cartier charges for a small brooch. And then to Dog Daze in Westchester, where we met an eight-week-old Schnauzer with bright eyes, relentless teeth, and the clean scent of a stuffed toy.

We named her Daisy and became her pack. When she died at the age of 14, we were inconsolable. Especially me, because the kids had moved on, and Daisy’s death emptied my nest.

My husband, rebounding too quickly in my opinion, was soon ready for another. Never again, said I. Just think about it, he said. I wept at his betrayal, refused to collaborate. You will fall in love again, he said, and set upon his quest.

As he joined the online world of Miniature Schnauzeriana, inspired by the community of fosterers and saviors, luring me to the irresistible photos decorating his screen, I began to melt. I missed Daisy terribly, but I also lamented her absence. Maybe he was right.

We wanted another Schnauzer, and after months of email communications with the New Jersey Schnauzer Rescue Network, he found her. She was one of three sisters born to an abandoned mother, and we were sent her baby pictures. We filled out questionnaires and applications (yes, we both worked at home; no, we didn’t have an in-ground swimming pool), provided references (Daisy’s vet, our landlord) and were at last notified that we’d been approved to adopt this splendid little creature whose name, then, was Spice.

We named her Murphy.

When she was twelve weeks old, residing in the kitchen until she was housebroken and sufficiently inoculated to meet other dogs, I broke my ankle. Housebound together, we bonded forever. At dawn when she’d yip to wake me, I’d settle in a chair with my left leg elevated and her on my lap, to read the Times and listen to Bach. Every day for weeks. Even now, the concertos for oboe and oboe d’amore bring us comfort and joy, our musical connection to a time, place, and each other. 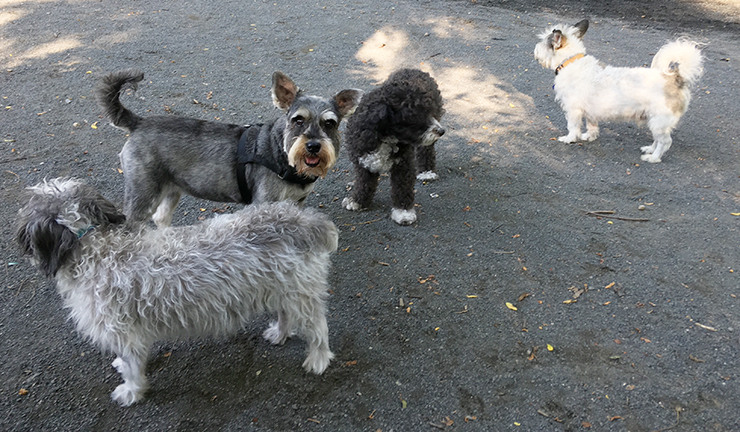 Once she’d had her shots and my bone had healed, out we could go! To the park, and the dog run. I’d never been a playground mom before; when the kids were young, they were in day care while I was at work. But I’m a playground mom now. Unless it’s raining (she hates being wet), Murphy and I are there every morning and late afternoon, bucolic bookends to the day. For her, it’s recreation and a social life. For me, it’s refuge and a social life. An Eden in all seasons—apple blossom to acorn, mud puddle to blizzard—this is our home away from home. I rarely read there, preferring to view the Hudson River in its many moods, and watch the sun set over New Jersey.

Just as I watch the dogs. How they choose, mediate, flirt, compete, and, in the rare event of a contretemps, work it out themselves. How some gallop like stallions, and others dance. How some, hot or weary, just lie about—but not from ennui, because this is an arena of psychology, smells, and even passive interaction. As a pup, Murphy frolicked with dogs of all shapes and gnawed on their whiskers; at 8, she has her favorites, and most of them—Nacho, Noodle, Stella, Chester, and Sunday—are her size. Sometimes she romps, sometimes she saunters on casual patrol, indulging the tugs of young ones, or ignoring them. She likes children, prefers adults, and takes kibble from strangers. When she’s ready to leave, she proceeds to the gate and throws me a stare: “Can we go home now?”

Sometimes we can, sometimes we can’t. Often I want to stay longer. And she understands. For three years, this place was an escape from the anguish involving my husband’s cancer and chemo, and the simultaneous pressure of writing and finishing my book in time for him to read it. Now that he is gone and the book is done, it has become an escape from loss. Solitude solving solitude.

Murphy looks like the Tramp in Lady and the Tramp. Her coat of dark salt-and-pepper—or brindle—is a palette of gray, brown, beige, and white. Unlike most Schnauzers whose parts have been docked and cropped, her ears are flappy and her tail is long. Her speech is not cropped at all. She’s quiet at home, exuberant on the street—her greeting a bright bark. “She’s just saying hello,” I explain as the uninitiated yank their dogs away. If she approaches a yappy Yorkie or sculpted Poodle she’d rather avoid, she mutters. Recently, she’s taken to announcing the arrival of the elevator (“Whoo-hoo! Let’s ride!”) and engaging neighbors in street-corner repartee. Her tone is a hybrid of arf, howl, and yodel, rich with intonation and eye contact, demanding a response. This generates a true exchange and can go on for as long as her partner will participate.

Ellie the Schnauzer lives next door. Lady-like and soft-spoken, neatly composed of gray and white, she was named for Eleanor Roosevelt (who owned a schnauzer herself).

Murphy was named for my husband’s Irish nanny. Miss Murphy was the love of his childhood, his confidante, his mainstay. In sunshine and shadow, from one room to another, she was always there for him.

As my Murphy is for me.

When I became a widow last year, a widow of longer standing shared a belief that has been for me the most sustaining: “You never get over it, but you learn to live alongside it.”

Indeed. Wherever I am—at the computer, the table, the piano…working, dining, or lying aboard my wide brass bed—I am learning to live alongside it.

With Murphy alongside me.

You may also enjoy these stories from NYCitywoman.com

Adopting a Dog or Cat from a Shelter

Love Me, Love My Pet