Adopting a Dog or Cat from a Shelter

Thousands of homeless animals are now safe at shelters and ready to find good homes. 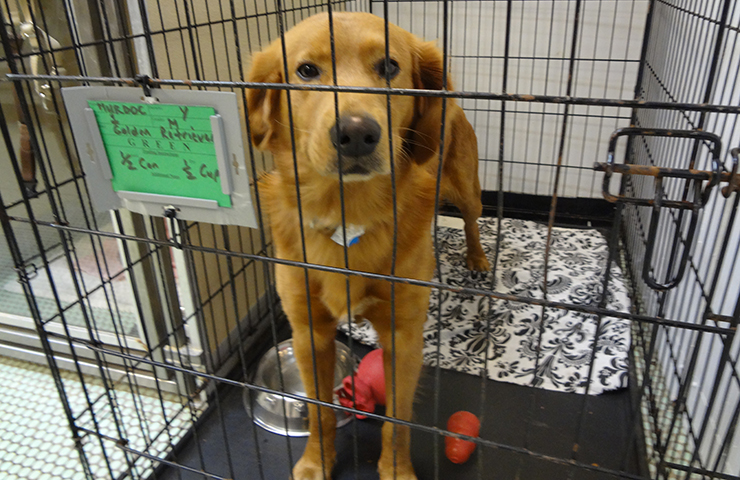 Murdoc, a golden retriever awaiting re-adoption at Animal Haven in Manhattan (he was adopted, returned, and adopted again after the picture was taken). Photos by Roberta Hershenson.

So you’ve decided to adopt a dog or a cat. Great! Experts say your emotional health will benefit, and you’re sure to get more fresh air from walking your dog. During my recent visit to Animal Haven, a shelter in lower Manhattan, Carol Szamatowicz, below left, a single schoolteacher in her 50’s, filled out the adoption papers for Clo, a 4-year-old terrier mix with white fur and tan ears that Carol got to know while volunteering at the shelter. Clo waited patiently at Carol’s side, her new pink leash at the ready, and then the two of them walked a mile home to Carol’s East Side apartment. 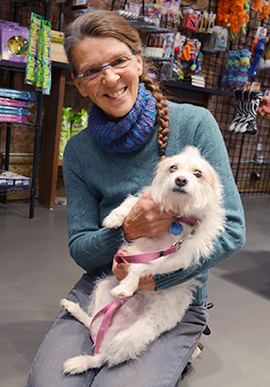 Since Clo was Carol’s first dog ever, I called a few weeks later to see how things were going. Caring for a dog is very satisfying,” Carol said, adding that Clo liked to run and was very smart. “She’s getting me back into jogging, and she comes with me. Now I’m taking walks three times a day, and I see the sunrise every morning and the sunset many evenings.” If you think “adopting” relates more to shelters than pet stores, you’re right. You’ve probably heard about puppy mills, which supply “pure-bred” but often mistreated or sick dogs to pet stores. However, the alternative—adopting from a shelter—may seem downright depressing to you. You get teary just thinking of all those sad-eyed animals whose last resort may be you. But in fact, adopting a pet at a New York City animal shelter has become a far more businesslike and satisfying experience than in the past. Thanks to The Mayor’s Alliance for NYC’s Animals, a ten-year-old non-profit organization with no formal ties to the city, thousands of homeless animals are finding new homes, even if it takes months. The Alliance’s network of 150 rescue groups and no-kill shelters is combining its resources and distribution services to assure that all animals remain safe and healthy until responsible owners are found for them.

The Alliance has a no-kill policy—except in the case of extremely injured, ill or dangerous animals—and it has succeeded in reducing the animal euthanasia rate in New York City by 74 percent since it was formed. According to Jane Hoffman, a former Wall Street lawyer who is president of the Alliance, 32,000 dogs and cats were euthanized every year a decade ago; in 2013 only 6,200 were “put to sleep.” But Jane and others feel that number is still too high, and the Alliance has committed itself to making New York a “no-kill” city by 2015. Jane, an alliance co-founder who has been active in rescue issues for more than twenty years, defines a no-kill policy as one in which “no healthy or treatable animals will be put to death just because they don’t have a home.”

Finding The Right Pet For You

While potential adopters may revisit a particular dog or cat at a shelter several times to make sure the animal is right for them, shelter directors have the reverse goal: finding an adopter who is right for an animal. It’s not just about falling in love with the first furry creature that wags its tail at you, Jane says. Factors like your lifestyle and your building’s pet ownership policies must be taken into account. “One of the big problems is the landlord,” she explains. “A lot have made the unfortunate decision not to allow dogs at all or to limit their size.”

If you’re an active person who likes to run or walk, you might consider a peppy dog like a Jack Russell terrier or an Australian sheepdog. If you’re more laid back, a Newfoundland or a pit bull might be a better match. Remember that smaller dogs are more high strung than larger ones, and “a big dog can be very happy in a New York City apartment” if they’re allowed, says Jane, who lives in an apartment with two dogs and four cats.

Cats—like a Maine coon or a Norwegian forest cat—are good choices for seniors or adults who don’t like to go outside. Adult dogs may also be better choices than rambunctious puppies that need to be housebroken. Puppies also chew furniture and shoes, and if they are from a shelter, there is no telling how large they will grow. “We never give a direct answer when people ask how large a dog will become, because we don’t know,” says Tiffany Lacey, Animal Haven’s executive director. The 3-story shelter was formerly a machine parts store and is now one of the jewels in the Alliance’s crown. Animals are housed in 7,000 square feet of space, and a non-profit pet supply shop in the front of the shelter gives the place a traditional pet shop feeling.

On the morning I visited the shelter, Mud, a 5-year old Chihuahua mix, sat in the shelter’s front window wearing a plaid corduroy coat, a wistful expression on his face. Mud was adopted and then returned by a woman who “thought he was looking at her oddly,” recalled Tiffany. Upstairs, a golden retriever named Murdoc thumped his tail softly as visitors approached his cage. He had been adopted, but was returned because the adopter’s children didn’t like him. (He was later re-adopted.) Other dogs I saw included a Jack Russell terrier that had been found tied up on a street corner, a small hybrid dog that was part Papillon and bore severe burns on his head, two deaf dogs from Ohio, a part-shepherd dog found as a stray, and a dog with such severe separation anxiety that he had wrecked two apartments after being adopted and was now back at the shelter. As Jane explained, “The shelter commits to an animal for life. We will take an animal back.” Adds Tiffany: “Please bring the dog back to us if things don’t work out.”

Two other important factors to consider when adopting a pet are your own age and that of the animal. Cats and dogs over the age of two are easier to care for because they are already house-broken. Jane prefers that everyone adopt senior animals who are eight years of age and older: They may not be as adorable as young puppies and kittens, but they have their own wonderful qualities. (Not to mention the fact that they have reached their full size.) Adoption fees cover shelter services like licensing, spaying or neutering, vaccinating the animal and injecting a tiny micro-chip into its neck for identification purposes.

No matter how old your pet may be, you should include him or her in your estate planning. Designate a caring person or organization to care for him or her and provide the resources to do so. Of course, make sure the designated owner agrees before making the provision official. That is a key part of responsible ownership, Jane emphasizes.

THE MAYOR’S ALLIANCE FOR NYC’S ANIMALS

Jane Hoffman, president and chairwoman of the board, Mayor’s Alliance for NYC’s Animals, with Tiffany Lacey, executive director of Animal Haven. They are holding the “Adopt Me” vest that animals wear at the Alliance’s adoption events.

The Mayor’s Alliance for NYC’S Animals says these are some questions that a shelter might ask prior to an adoption:

Have you owned a cat or dog before?

If yes, is the animal still with you?

If no, what happened to the animal?

If you rent an apartment, does your landlord allow pets? The shelter may ask to see the lease.

Are you able to handle the financial obligations of pet ownership? For instance, can you afford vet care, emergency medical care, food, litter, and other supplies?

Is anyone in your home allergic to cats or dogs?

Do you currently have a vet?

If you are adopting a cat, does your home have window screens or guards?

If you are adopting a dog: Is your back yard fenced in? What’s your work schedule like? Will the dog be home alone all day? Who will walk the dog while you’re at work?

The shelter might also require that family members come to the facility to meet the pet prior to adoption.

Alliance Participating Organizations. Link to all of the shelters and rescue groups that partner with the Mayor’s Alliance.

Roberta Hershenson is an arts journalist whose features, profiles, and news stories have appeared in The New York Times and other publications. She wrote a weekly arts news column for the Westchester section of The Times from 2000 to 2006.