Not to be deterred by the lockdown, Elise Engler spent the first year of the pandemic drawing and painting the news, day by day. Result? A raucous, biting record of events—some cruel, some bizarre, some heroic. 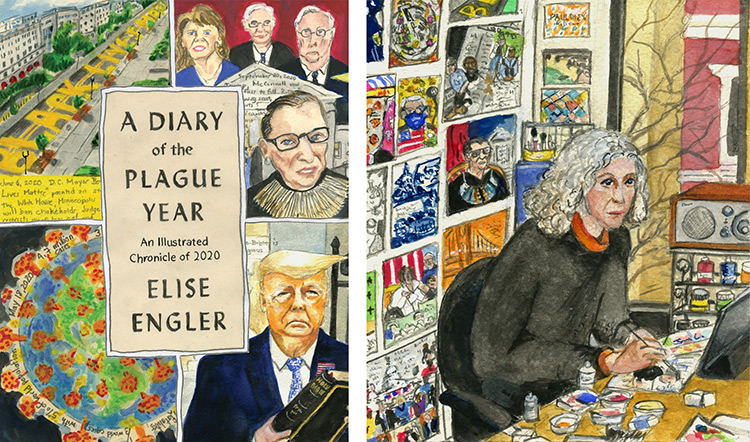 Elise Engler has a longstanding penchant for methodically, one might say obsessively, recording objects and incidents around her. Over the years, this New York artist documented every item in her apartment; each of her handbags, one by one; and every single block along Broadway (there are 252).

Once COVID 19 hit, every morning, Elise, an Upper Manhattan resident, switched on the old wooden radio next to her bed, listened to WNYC’s newsbreaks and, at 8 a.m., to “Democracy Now.” Then she’d head to her studio, where, in her raucously ribald style, she drew and painted vignettes from the morning’s news items that caught her attention. The result is A Diary of the Plague Year: An Illustrated Chronicle of 2020 (Metropolitan Books/Henry Holt and Company). Just out, it covers a mélange of events from January 20, 2020 to January 21, 2021, the day after President Biden’s inauguration.

This Plague Year diary, stunning in its depth and breadth, records virtually every person and event you read about—and many you missed: Bernie Sanders bowing off the campaign trail, Cuomo and de Blasio sparring, Hong Kong protesters tear-gassed, Representative John Lewis’ death, the removal of Confederate statues, Pelosi at the podium, the passing of RBG. It is a visual record of a year, as Elise describes it, “scarred by fecklessness, devastation, rage, injustice, illness, and death.” It is also a record of moments of honor, commemoration and pride.

“I didn’t know where my relentless listening was going to take me,” she admits, adding that she’d been visually documenting the daily news since 2015, thinking of the collection as a Diary of a Radio Junky. 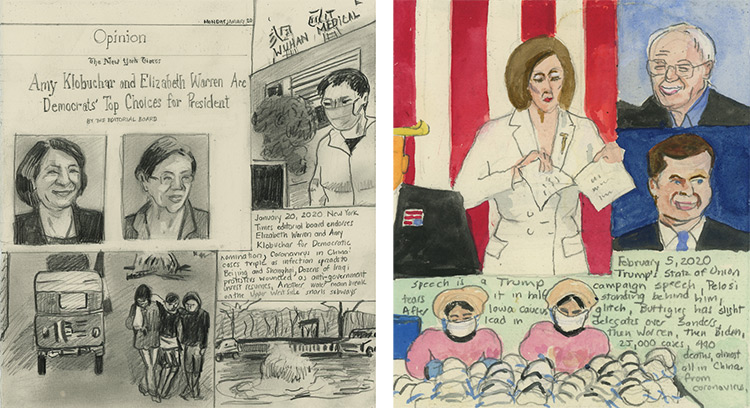 COVID-19 crept up on her, as it did many of us New Yorkers. Her drawing on January 20, 2020—the first illustration in the book—focuses on a New York Times editorial endorsing Elizabeth Warren and Amy Klobuchar (above) for the Democratic nomination. Along with drawings of a water main break on the Upper West Side snarling subways and Iraqi protesters is a small panel of a masked woman in Wuhan, with the caption “Coronavirus in China cases triple.”

The next day, the impeachment trial of Donald Trump began. By the following day, Engler sketched masked hospital workers: “Coronavirus death toll is rising in at least 5 countries (1 case in U.S.)”

January 27 was a crushing day: Basketball star Kobe Bryant and five others died in a helicopter crash while Coronavirus cases soared, reaching 20,700. Five cases were recorded in the U.S.

At first, Elise drew events occurring at a distance: Pelosi tearing up Trump’s State of the Union-cum-campaign speech (above), the Democratic candidates campaigning and debating, Roger Stone sentenced to 40 months in prison, Russia meddling in the election, Harvey Weinstein found guilty of rape, Bolsonaro disputing the reality of Covid as Wuhan reported no new cases. 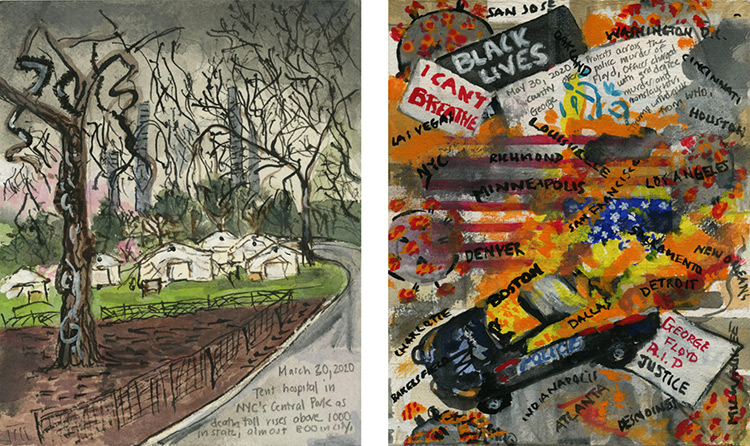 But by the end of March, as Covid took New York City by storm, Engler was in the middle of it. The U.S. was leading the world with reported Covid cases, and New York City accounted for most of them. She watched as ambulances raced through the streets and recorded hospitals so overwhelmed that a field hospital was quickly erected in late March in Central Park (above)—the first in the continental United States since the Civil War.

By May, Trump was pushing hydroxychloroquine. Throughout the month, police in riot gear faced masked protesters calling attention to the killing of George Floyd and Breonna Taylor (above).

And the march of events continues: Protests go global, infections skyrocket in more states and countries, as leaders like Trump and Bolsonaro suggest that it isn’t all that bad. “That’s life,” quips the Brazilian president as cases hit 1 million.

And it continues: Ghislane Maxwell’s troubles, the melting of ice caps, the crippling of the postal service, California forest fires… 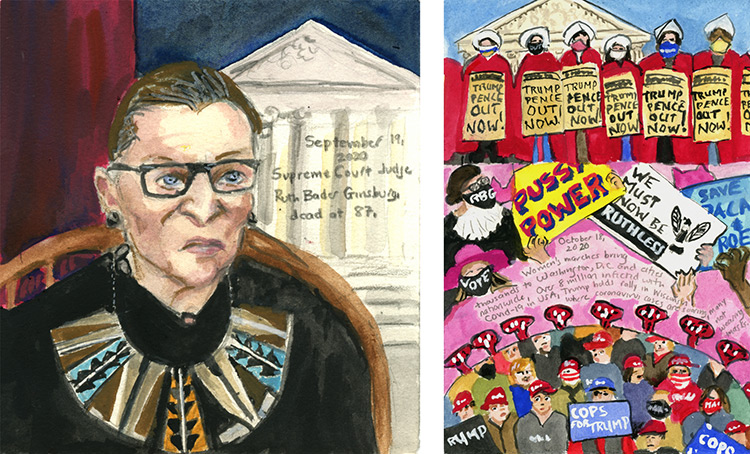 …the death of RBG on September 19 (above), and the lightning-quick appointment of Amy Coney Barrett to the Supreme Court, reports of both Melania and Donald testing positive, along with many others in the White House.

By October women were marching (above) and Fauci was trying to correct Trump’s false statements. 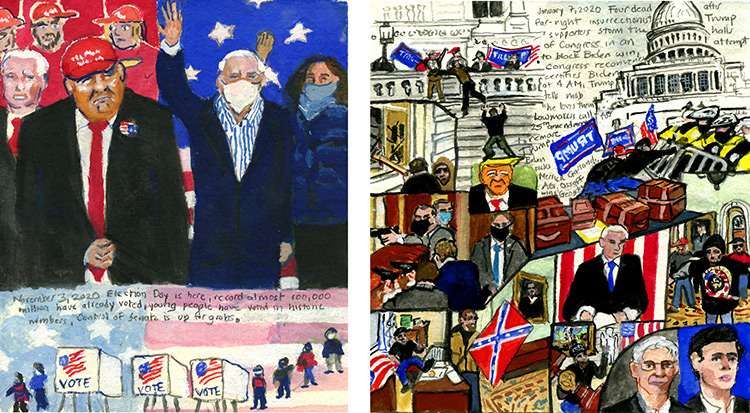 The presidential debates and more wildfires. A record 100,000,000 people vote before Election Day—during the pandemic. Biden wins the election (above). With no evidence, Guiliani calls out election fraud. Trump refuses to concede, perpetually crying “stolen election.”

Pfizer and Moderna vaccines are found to be effective. The first shot is administered in Queens, Brexit is confirmed, Trump binges pardons as his supporters break into the halls of Congress (above). Trump says he loves them.

At the end of his presidency, Trump pardons/commutes the prison sentences of 143, including many of his allies. And on January 20, while Biden is inaugurated as 46th president, Kamala Harris as vice president—Trump decamps for Mar-a-Lago.

Buy the book and read it, remembering those we lost, what we witnessed, how we persevered—and hope that, if there is a sequel, it’s not as apocalyptic and tragic as this.

Suzanne Charlé has written for numerous publications, including The Nation, House Beautiful, and The New York Times, where she was a freelance assigning editor for the magazine. She has co-authored many books including Indonesia in the Soeharto Years: Issues, Incidents and Illustrations.