Installing farms on the 14,000 acres of unshaded rooftops in the city could feed 20 million people. 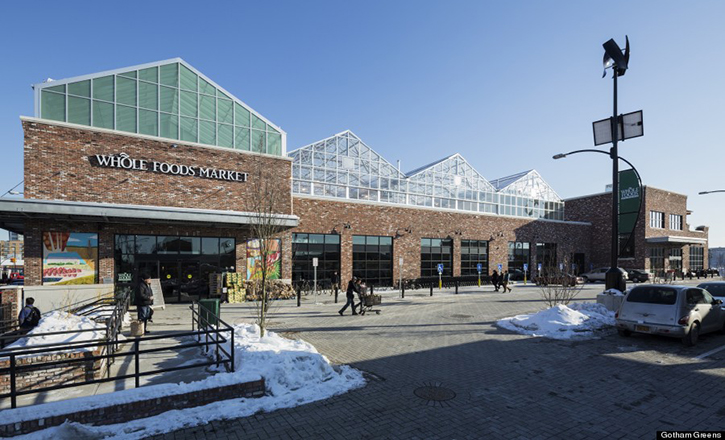 New Yorkers may be indulging in home grown salad this summer, as basil, bok choy, tomatoes, leeks and cucumbers planted on rooftops in Brooklyn, Queens and even Manhattan are harvested. In Long Island City, The Brooklyn Grange has a one-acre rooftop farm over what used to be Standard Motor Products; it runs another farm in the Brooklyn Navy Yard. BrightFarms is working on a rooftop farm at a former Navy warehouse in Sunset Park. Other smaller farms dot the roofs of Manhattan. Even restaurants are getting involved: The Waldorf unveiled an elegant but small rooftop garden in 2014, where diners will have the chance to “pick their own” fruits and vegetables for dishes prepared by the chef.

“In terms of rooftop commercial agriculture, New York is definitely the leader at this moment,” Joe Nasr, a researcher at the Center for Studies in Food Security at Ryerson University, told the New York Times. “I expect it will continue to expand, and much more rapidly in the near future.” Since Nasr spoke with the Times, tens of thousands of feet of hydroponic farms have opened up on city roofs. New York Sun Works, a non-profit organization that promotes sustainable urban farming, estimates that if farms were installed on New York City’s 14,000 acres of unshaded rooftops, harvests could feed 20 million people.
. . . . . . . . . . . . 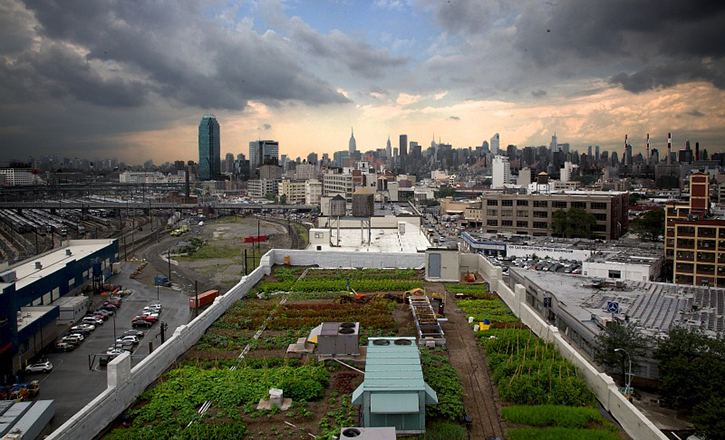 One of the pioneers in this high-profile urban agriculture is Gotham Greens. In 2011 it began harvesting vegetables in its hydroponic 13,000 square-foot greenhouse on a warehouse rooftop in Greenpoint, Brooklyn. The $1.4 million complex now employs 20 people and produces three kinds of lettuce, arugula, baby kale, basil, cucumbers, as well as Roma and cherry tomatoes, which it sells to Whole Foods, Food Direct, D’Agostinos, Westside Market, Brooklyn Kitchen, Union Market, and the famed Gramercy Tavern.

“We’re so lucky—every day we’re sold out,” says Jenn Nelkin Frymark, who heads all greenhouse operations at Gotham Greens. “We can’t take on more customers.” Frymark, who has a Masters degree in greenhouse agriculture, worked in Arizona, the Caribbean and Antarctica before landing on the rooftops of New York City, where her partners, Viraj Puri and Eric Haley, started Gotham Greens.

She says that as a young student she thought about being a chef or an architect. “Now, I grow food on buildings,” she says. “Perfect. With urban farming you get to think about everything from design, flavor, the environment, engineering and urban planning to how to create healthy and creative work environments for employees.”

There are many advantages to hydroponic gardening: Controlled Environment Agriculture (CEA) uses advanced irrigation systems that require much less water than traditional farming; no pesticides are needed; and crops can be grown year-round in extreme climates. “We can produce ten to one compared with field-grown crops,” Frymark says. The current crop in Brooklyn is roughly 80 tons.

And while some hydroponically grown vegetables are bland tasting, Gotham Greens aims at attaining the same good taste as vegetables grown in backyards. “Vegetables grown outside invariably are stressed,” explains Frymark, who increases the secondary metabolites (flavor compounds) in her plants. “So we plan small ‘stress events’ a few times a day—such as cutting the irrigation.” This ultimately makes the tomatoes more sugary by tricking the plant into sending more sugar into the fruit. “It’s a survival response on the part of the plant.”
. . . . . . . . . . . . 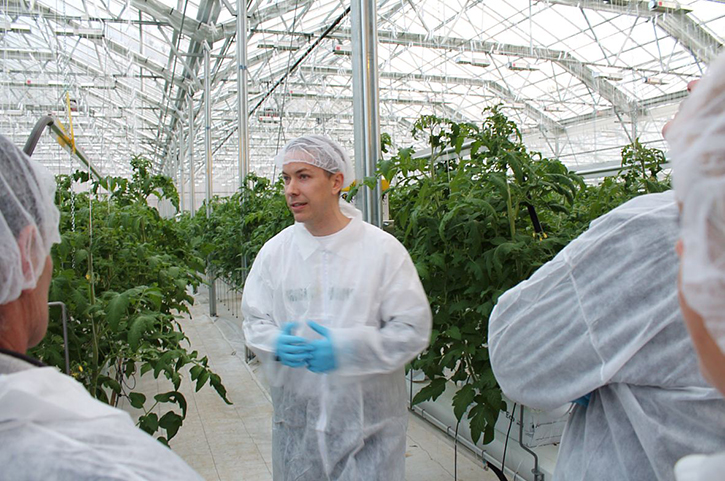 Greens Can Be Picked and Delivered the Same Day

While the initial investment is high, rooftop farming can be smart economically. Nevin Cohen, an Assistant Professor of Environmental Studies at The New School, who specializes in urban agriculture, notes that rooftop farming provides landlords with an additional revenue stream—Gotham Greens rents the rooftops it uses. The greenhouses also lower the building’s costs of heating and cooling. For the farmers, transportation costs are considerably lower. It’s also good environmentally, since many greenhouses make use of waste heat from buildings and use energy from solar collectors, cutting their carbon footprint.

Proximity to customers also assures freshness. Greens can be picked and delivered by a van the same day. “Our products are harvested before breakfast so they can be on your plate before lunch,” the partners of Gotham Greens like to say.

The price of the company’s greens, according to Frymark, is competitive with other organic greens: While it costs more to run a small company in some aspects, she notes, larger growers have to worry about distribution and shipping costs. (Gotham Greens’ label proudly proclaims: “Grown & Packed in Brooklyn New York. Fresh Local Produce.”)

Gotham Greens has been a for-profit venture since 2008, when Puri and Haley started working on their business plan to attract investors. Now they are expanding. In early 2014 Gotham Greens opened one of the largest commercial greenhouses in the country on top of a new Whole Foods market in Gowanus, Queens. The 60,000-square-foot hydroponic greenhouse (roughly half an acre) was supported by a $900,000 grant from the state Regional Economic Development Council. Gotham Greens will also build a rooftop farm on top of the Oak Point food distribution site in the Bronx, with the help of another grant of about $400,000.? “CEA is growing by leaps and bounds—you can see a lot more activity on the rooftops,” says Frymark. “You can do this anywhere.” Mostly, expect to see rooftop greenhouses in cold urban areas: “There’s no reason for CEAs in the Salinas Valley, where the fields produce year round. Also, there are certain crops, such as corn, that just aren’t suited to rooftop hydroponic gardening.”
. . . . . . . . . . . . 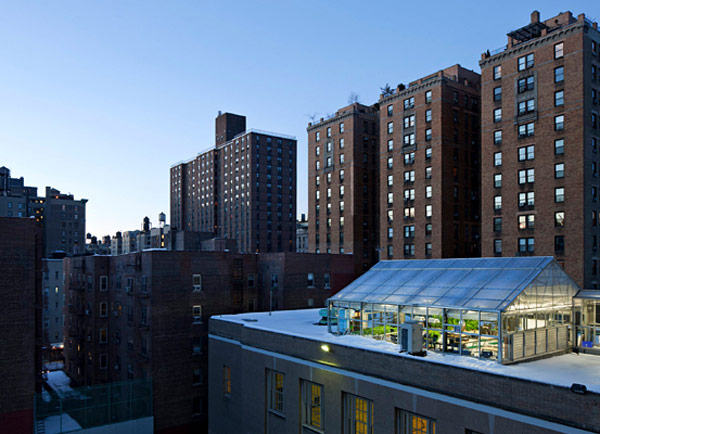 The potential is impressive: According to the Urban Design Lab at Columbia University’s Earth Institute, there are some 3,000 acres of potential farming land available on city roofs. “Rapidly changing technologies and the skills and experience being developed by today’s rooftop farming pioneers will likely make wider adoption much more feasible in the near future,” wrote the authors of The Potential for Urban Architecture in New York.

“NYC’s density and diverse and vibrant food culture make an attractive context for aspiring urban farmers,” the report states, adding that the city’s “industrial and manufacturing areas are highly suitable for rooftop agriculture, due to public interest and support, access to capital, a robust transportation network, adequate infrastructure, proximity to institutions of higher education, and consumer demand.”

Constructing rooftop farms in low-income areas can help residents. As the report points out, these neighborhoods suffer from higher than average rates of obesity and diabetes and inadequate access to healthy food retail: “It is in these areas where urban agriculture could have the greatest impact on food security.”

Community is also important to urban farming. Right now, Gotham Greens doesn’t offer tours of the Brooklyn greenhouse, but the team is thinking of ways for Whole Food customers in Queens to see the farm in action, once the store opens. “We think it’s important that people be connected with the process,” says Frymark.

“People see us—it’s a total success story, compelling and profitable, and something that is being encouraged by the city,” she adds. “Other people see it and think ‘I can do that!’”