It happened in West Palm Beach and involved a car caravan, a climb up a hill, a folding chair, and a kindly National Guardsman 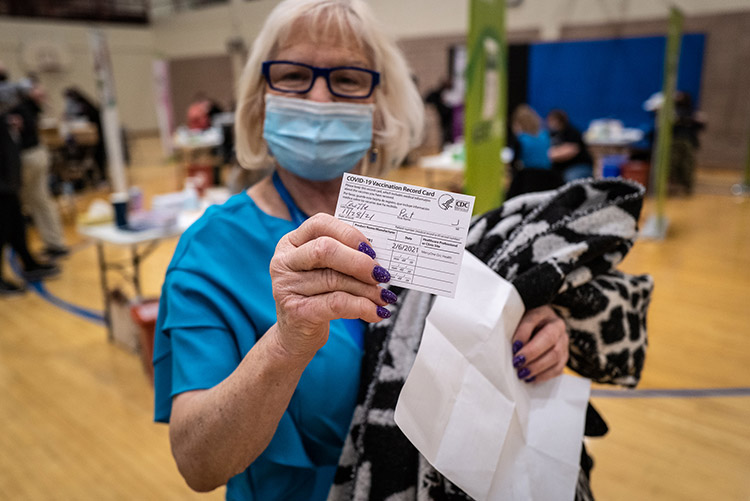 The notice on the community bulletin board read, “200 vaccines available on Saturday at the Tabernacle Baptist Church in West Palm Beach. Drive-through. Confirmation needed.” That was followed by an email address, to register.

My husband, Ron and I are both seniors, he in his late 80s. At the time, we were spending a few months at our winter vacation house in Boynton Beach, Fla., about a 45-minute drive from the church. But as a New Yorker whose lifelong form of travel has been the subway, not a car, I panicked at the thought of driving to West Palm. Is it north of here? East? Must we take a highway? Will we get lost and miss our appointment? After all, this vaccination opportunity at the Tabernacle Church was a one-day pop-up. If we missed it, who knew when we’d have another chance?

That worry was on top of the fact that the nearly year-long Covid pandemic had caused clinical depression for me, and necessitated an ever-increasing dosage of Zoloft. Hopefully that would soon end. But in the meantime, my anxiety level rose as I found myself faced with yet another thorny issue. While I had emailed our names and dates of birth to the stated email address, there’d been no response. Should Ron and I take our chances and show up on Saturday without a confirmation?

Luckily my husband’s aide, Ann, who lives in West Palm Beach, volunteered to stop by the church on Friday to make sure we were registered. That afternoon, she texted to me that our appointment was at 3 p.m. the next day. At that point, I felt jubilant, but I also panicked at the thought of driving to an unfamiliar neighborhood. Ann volunteered to drive to our house in her own car, accompanied by her teenage daughter. We would then tailgate her in our Honda to this highly anticipated, life-changing vaccination event.

The author, Susan Shafer, and her husband, Ron.

On a sunny January 16th, our car caravan headed out from Boynton Beach. Forty-five minutes later, as we neared the Tabernacle Church, situated on a hill, we discovered that calling this vaccination event a drive-through was a misnomer. A police car was parked horizontally to prevent cars from driving up the block. So, after conferring with Ann by phone, we agreed to find parking spaces in the area, which was about as difficult as finding a spot near our Upper West Side apartment. And then we’d have to walk the rest of the way—a problem for Ron, who has difficulty walking long distances.

More anxiety set in as I glanced at the helter skelter crowds on the wide street. There were no lines, just clusters of more than 300 people milling about, happily involved in conversation. But it was impossible to figure out if they all had appointments or if some had just showed up in the hopes of getting a shot.

Ron and I drove around the block a few times in this low-income neighborhood, passing rundown homes and uneven sidewalks covered with cracks and bulges. As we circled around, I saw few people out on the streets, but I did spot one teenage boy sitting on the steps evidently outside his home; appearing despondent, he was bent over at the waist, his head tucked in his crossed arms, staring at the ground.

Ron and I finally found a parking spot two blocks from the church, as did Ann. So the four of us began to climb the hill—slowly. With my purse on my left shoulder and a metal chair tucked under my right arm (so that Ron could rest when needed), we made it to the top, where we marveled at the tall, 95-plus year old Romanesque Revival church, known as “God’s House on the Hill Serving Christ.” Judging by the photos on the church’s website, the congregation is all Black.

Scanning the crowd of people, I wondered with whom we should confirm our registrations. There were no signs to point us in the right direction, but I figured that the woman in the middle of the road with a walkie talkie was probably the right person to approach. “Check with the man over there. He’s got the list,” she commanded. (Was the man a pastor? a police officer? a security guard? a resident of the neighborhood? I wondered.)

He checked our names off his list, then pointed to a low modern building across the street, which turned out to be the U.B. Kinsey Education and Community Center, a 12,000 square foot multi-purpose structure. “That’s where you’ll get your shots,” he said. I was disappointed that I would not be allowed to even glimpse at the architecture and windows inside the regal-looking church.

We joined the line snaking out of the entrance to the center, filling out the required forms as all the while the line kept inching forward. “Keep your distance, please,” someone in charge chided us. “You’re all too close.”

Once inside, we sat at a table where a young Black female administrator asked for our driver’s licenses. Since I’m a New Yorker, not a Floridian, I worried if I might be denied a shot, even though Florida’s Governor DeSantis had recently declared that all would be welcome. (Those with out-of-state license plates on their car might have a problem, but that didn’t apply to us.)

Then the intake lady attempted to obtain answers to the items on the questionnaire. Problem was that Ron forgot his hearing aids, and we were all wearing masks, so her first attempt to communicate with him was unsuccessful. “Sorry, I can’t understand you,” Ron said apologetically, pulling down his mask. “No, no,” the woman said good-naturedly, “Keep your mask on.”

We were at an impasse until we figured out the solution—a makeshift telephone game. Addressing Ron, Mary asked him a question from the sheet. I’d repeat the question in Ron’s ear, and he responded back to Mary. That issue solved, we got approval to enter the second room, escorted by a gracious National Guardsman in uniform. I looked around for a place to leave my increasingly heavy metal chair; the National Guardsman kindly offered to keep an eye on it as we parked it against a wall.

By then, I was exhausted and I can’t recall what the women at the new table asked. I just remember she was patient and warm.

One of the National Guardsmen came over, instructing us that if we needed to use the restroom we were to do so now, before receiving our shots. “You won’t be allowed to use it later,” he declared. I assumed the reason was that if someone collapsed or had a bad reaction to the vaccination, there would be no one in the restroom to help. But that’s just a guess. I was too tired even to ask.

Once again, the gentlemanly Guardsman accompanied us to that all-important third, and last, room, which was a huge space roughly divided in two. On the left were long, rectangular tables where our shots would be administered. On the right, rows of about 40 well-spaced chairs for those who were resting post-vaccination.

“Please take a seat at station 3” the guardsman said, “and you, sir,” addressing Ron, “at station 4.”

The women at the table greeted us warmly. “My name is Sharon,” the middle-aged white woman explained. “I’ll be giving you your Covid vaccinations.” Sharon asked some questions about whether I’d received any vaccines in the past (Yes), what drugs I’m allergic to (mostly antibiotics) and what happened when I took them (throat closed).

Since I’d had a severe reaction to an antibiotic, I was instructed to wait not the usual 15 minutes post-vaccination, but a full half hour, to make sure nothing adverse occurred. Sharon then swiped my upper arm with an alcohol pad before inserting the needle. The injection was so smooth and painless that I asked, “You mean that’s it?” “Yes,” she responded, smiling.

Sharon also mentioned, reassuringly, that if I had an adverse reaction, EMS personnel were on hand to take me to the hospital.” It was then that I noticed a muscular, no-nonsense man in an EMS uniform pacing the room, and when I looked out the window I saw an ambulance parked at the curb. I felt like hugging everyone, so thankful for this service, this preparation, and this care.

Meanwhile I wondered how Ron’s administrator had handled his hearing problem since I wasn’t available to repeat her questions. I needn’t have worried. Every time I glanced at Ron’s station, I saw his administrator shouting her questions into his ear and Ron responding by nodding or shaking his head. At some point I even heard them laughing together.

Ron and I were each given an index-size card called COVID-19 VACCINATION RECORD with, among other information, the date of this first Moderna vaccine. We were also given a date to return to the same building four weeks later for our second shot. And as expected, we were asked to relax on the chairs on the right side of the room, waiting to see if either of us was having a problem. (We weren’t). The National Guardsman, who must have been keeping an eye out for us all along, reappeared and handed me our metal chair. That was lucky; I had completely forgotten about it.

After our appointed time, we were given the okay to leave the building. I felt elated.

One last hurdle awaited us—traipsing down the hill to our car. Ann, who had been waiting for us outside the community center, took her post on my husband’s right, while I hooked arms with him on his left. We walked slowly down the hill, exhausted from a stressful, though successful, day. All went well until we encountered four people chatting happily but blocking our way. To avoid them, we stepped around them and down into the gutter, causing Ron to lose his balance and fall forward. Just in time, Ann and I grabbed him from both sides and hoisted him up, preventing a serious injury. Ron was clearly tired and needed to rest.

Aha! The metal chair I had been lugging all day came in handy. I unfolded it, he sat until he felt rested, and then we made our way—at times walking, at times sitting—to the bottom of the hill and into our car. We thanked Ann, who has still not been vaccinated, as she’s only in her fifties. This seems grossly unfair, considering all she’d done for us.

Once back at our house, I took an hour and a half nap, exhausted but happy at our accomplishment.

You may enjoy other NYCitywoman articles by Susan Shafer:

Caring for a Loved One With Dementia