You can fortify your brain power and positively affect your mood through the game of Mah Jongg. But be careful, Mah Jongg can be addictive! 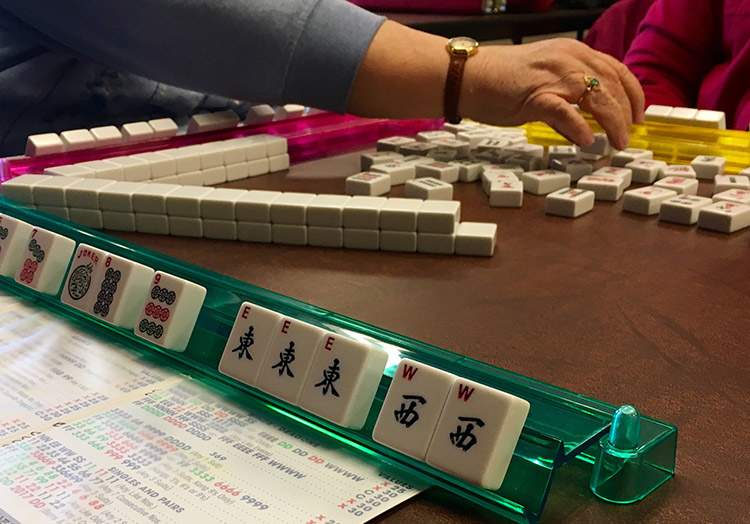 Playing Mah Jongg at the Milton Public Library in Vermont.

How many times lately have you misplaced your house keys? Or walked into a room and forgot what you came for? Or struggled to name a famous movie actress, though you can picture her clearly in your mind.

Of course, these minor events are normal, especially as we age, but if you’re looking for a way to sharpen your memory and keep your mind stimulated while making new friends, try playing Mah Jongg.

You read that right. Mah Jongg. Mah Jongg—sometimes spelled Mah Jong or mahjong—is a game with Chinese roots that challenges the brain to stay sharp, improve concentration, and prevent decline, all while socializing with other players.

The game was introduced in the United States in the 1920s by American engineer Joseph Babcock who had worked in Beijing, then simplified and recorded the rules of the game for American players. Mah Jongg had a surge in popularity in this country up until the 1950s, followed by a decline, but interest is on the upswing today.

Perhaps one reason for renewed interest in playing, in New York in particular, can be attributed to the excellent teachers in the city who encourage their students to be successful. Mah Jongg teacher Linda Feinstein, for example, has taught more than 4,000 students in her home over the past 19 years and operates Mah Jongg Mondays in a restaurant in Manhattan, where more than 100 players gather to eat lunch, then play the game.

This writer can attest to the enthusiasm of those players when I attended a Mah Jongg Monday last year. No sooner had I and the three others I was assigned to—based on our reported ability levels—taken the last bite of our salad, than we hurried to a card table, unfolded our Mah Jongg cards, mixed the Mah Jongg tiles and began to play—and did so for three hours. True, I was tired at the end of the day but, as a retiree, I had had a rigorous mental workout, and better yet, connected with three potential friends.

Said Sandy, a retired computer saleswoman, about that day at Mah Jongg Monday, “The game was challenging, but fun. I even won a few times!”

What does research say?

What is it about the game of Mah Jongg that scientists say is beneficial for a player’s cognition and mood? Mah Jongg involves finding workable patterns in the tiles before her, deciding which tile to throw based on the other players’ actions, forming a strategy for how one might win, and changing strategy quickly to prevent others from winning first.

Given that a player needs to balance all these variables at once in a short time, researchers who have studied the effect on people’s brains report that compared to non-players, the minds of Mah Jongg players were sharper, their memory more long lasting. What’s more, it is thought to help prevent, or delay, dementia.

Said Mah Jongg instructor Linda Fisher, who teaches the game in Queens and orchestrates Mah Jongg Marathons in Manhattan’s Bryant Park: “Mah Jongg makes use of many different cognitive skills. It requires focus, so you can keep track of tiles discarded by other players. It requires the ability to recognize patterns and weigh odds.” Furthermore, Fisher adds, “it demands an ability to intuit the playing styles of opponents and strategize to optimize your chances of winning.”

Ahuva Ellner, another experienced Mah Jongg teacher, adds: “Mah Jongg demands that players make decisions fast and change direction quickly depending on the moves of others.” That skill can spill over to life outside the game room. “One of my students told me that Mah Jongg has helped her make educated decisions in her ‘real life.’”

What about the social aspect of the game? Researchers have pointed out that since Mah Jongg is a social activity, participating in informal conversations positively affects one’s overall happiness (“Whose house next week?” “Where did you get those stunning earrings?”). Says Linda Fisher, “Friendships often form that extend beyond the playing table.” Another benefit? “Playing Mah Jongg brings us into contact with a community that is far-reaching and varied.”

I certainly have experienced the beneficial effects of meeting with other women for an afternoon of Mah Jongg. It’s at those games—I play twice a week, mostly with a different group of women on each day—that I feel a connection to friends, and even pick up all sorts of tidbits, from informal reviews about Broadway shows (“You MUST see the Temptations musical”) to news about my neighborhood (“The bank at the corner is closing.”) These gatherings make my week more fulfilling, a feeling apparently held by thousands of players nationwide. The National Mah Jongg League, the organization which standardizes the rules for American Mah Jongg, estimates that it has more than 350,000 members with new people joining every day. (Please see the Resource list at the end of this article for information on contacting them.)

How is Mah Jongg played?

So, what is Mah Jongg? Simply put, it’s a Rummy-like, tile-based game in which four players (and sometimes, a bettor) take turns picking and throwing their tiles, one at a time, trying to match the tiles on their rack with one of the patterns on the card, each time calling out the name of the tossed tile. (The tiles vary by suit (crack, dot, bam) and rank (numbers from 1-9). (Example: “two bam” or “five dot”) There are also special tiles knowns as dragons (red, green, white), winds (North, East, West, South), flowers, and jokers.

Each game lasts approximately 12 minutes so many games are played in the course of a few hours. If there is a fifth player, a bettor, she tries to predict who will win the round after a procedure called the “Charleston,” and she collects money if she predicts correctly.

The patterns on the official Mah Jongg card change each year, thus creating excitement as players anticipate the publication of a new card—and its distinct challenges. According to teacher Ahuva Ellner, winning at the game is “about 70% luck and 30% percent skill” but 100% engrossing.

So, next time you feel your memory slipping, or want to expand your social network, take up the game of Mah Jongg and enjoy its many benefits. 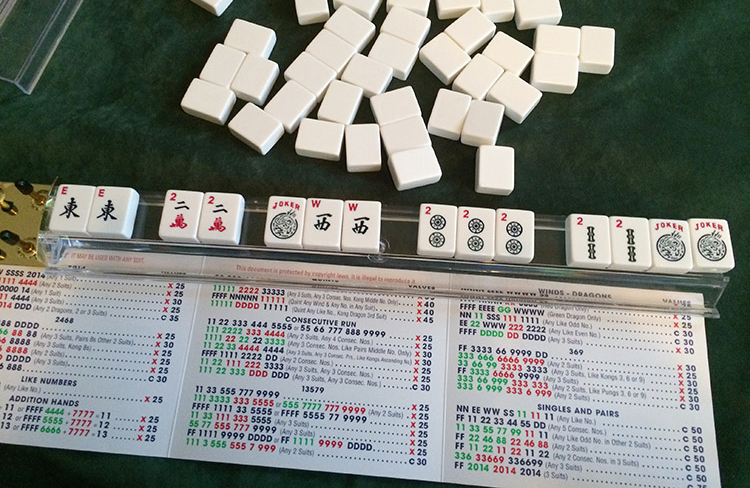 RESOURCES (Check with each to see when Mah Jongg will continue after the 2020 pandemic.

Ahuva Ellner (ahuvasellner@aol.com) Based in Manhattan, experienced teacher Ahuva teaches small groups in her home or in players’ homes, and blogs on Mahjonggmentor.com.

Linda Feinstein (mahjongteacher@aol.com) Before the pandemic, Linda held Mah Jongg Mondays in a New York restaurant through the Manhattan Mah Jongg Club. Now you can join the Mah Jongg Mondays podcast. She also teaches small groups in players’ homes or in her own.

United Federation of Teachers (212 331-6314) Call for their bulletin of courses (or check here for the latest class schedule PDF). Classes for retired teachers at the Si Beagle Learning Centers Program.

Bryant Park’s 2022 Mah Jongg Season will run from May 19th through September 5th. Their weekly Mah Jongg Socials are scheduled for Thursdays from 3 to 7 pm. We will also have a few marathon sessions on the following Mondays: May 30th, July 4th, and September 5th from 1 to 6 pm.

A Beginner’s Guide to American Mah Jongg: How to Play the Game & Win by Elaine Sandberg.

Websites and an app for practice

www.mahjonggmentor.com: Yearly membership is $29.99. With a paid membership, you have access to video lessons on how to play, how to strategize and participate in exercises to reinforce learning.

www.mahjonggandme.com: Ann Israel says, “Mah Jongg is not just a game. It has become a part of my life that allows me to entertain my Mah Jongg-playing friends, cook great meals to serve to them and test my mental skills during our game play (which, hopefully, is often).” Also. Israel wrote Mah Jongg: The Art of the Game: A Collector’s Guide to Mah Jongg Tiles and Sets along with co-author Gregg Swain.

Where to purchase a Mah Jongg card

Where to purchase a Mah Jongg set

National Mah Jongg League Consider becoming a member of this organization, which donates millions of dollars to numerous charities. Membership is automatic with the purchase of a card.
. . . . . . . . . . . .

Susan Shafer, a former teacher and children’s book editor, is now a playwright and freelance writer.

You may enjoy other stories by Susan Shafer:

Caring for a Loved One With Dementia