Most people get married for the first time in their late 20s. We tied the knot at age 71 and 85. 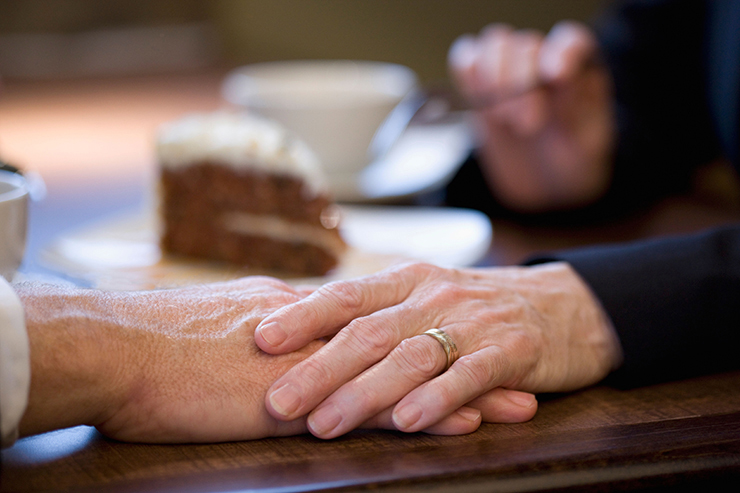 It was Saturday evening and I was preparing for a conference when the phone rang in my Manhattan apartment. Ron, my partner of 36 years, had just called from Florida two hours earlier, so I was surprised to hear his voice, weak and confused.

“I had a car accident. I’m in the hospital.”

“What? How? Are you okay?” It took me a few seconds to absorb that this was real. Then I started shaking.

“The doctors said I had a concussion. But the other tests—the CAT scan, the blood tests—they’re negative.”

Life can change suddenly. After our earlier conversation, Ron had headed to the grocery to buy milk, when another car ran into his, just behind the driver’s seat. Ron didn’t remember anything after that, but an ER doctor told him an ambulance had brought him to the trauma center at Delray Medical Center.

The doctor got on the phone: “He’s had a concussion, but no broken bones.”

I was horrified to think that the man I loved was lying in a hospital bed with no familiar faces to comfort him. After booking my Jet Blue flight, I called four friends who live in our over-55 community in Boynton Beach. No luck; I left voice mails. Then I finally reached our next-door neighbors, who were having dinner at a local restaurant. They rushed to the hospital and called me from Ron’s room. “He has a cut on the bridge of his nose, but otherwise he’s fine,” they assured me. I tried to calm myself.

When I entered Ron’s room the next morning, he looked distressed but basically okay. The doctors decided he was healthy enough to be discharged.

By the time the paperwork was finished and we were on our way home, our attitudes toward our status as “significant others” were changing. What if Ron hadn’t been fine after the accident? What if the doctors had to operate and needed permission from a family member? He had only me, his longtime partner. But that may not have been good enough for the hospital.

Back in our house, we talked about stories we had read over the years of other unmarried couples and problems that ensued in hospitals. In one case, a partner wasn’t even allowed in the other’s room. Another man couldn’t express his opinion about an impending medical procedure of his significant other.

True, Ron and I had consulted a lawyer two years before and signed important papers that would allow us these rights: We made each other “pre-need guardians” in the event of future incapacity. We assigned each other as health care surrogates that gave us medical power of attorney. And we each made a living will, letting the other know our wishes in an end-of-life situation.

I packed the binder with all those documents in my suitcase and was ready to show proof, if needed.

But when we sat down to dinner, I knew that something had changed. We began talking about the disadvantages of our “significant-other” status: We were not related. We had separate Social Security benefits. We filed our taxes individually. We had individual, not joint, bank accounts. We had separate health benefits, me, a retired teacher and editor, and Ron, a former ad man. We looked at each other and admitted: Enough is enough.

And that’s how the two of us, a couple for nearly four decades, decided to marry for the first time in our lives: me, age 71, and Ron, 85. According to statistics, we were definitely in the minority: Only .49 percent of “eligible” adults over 65 married in 2012, according to the last US Census. We’d been in the minority for quite some time—by age 64, only seven percent of the population had never married.

The next day, I drove us to the courthouse in Delray, where we filled out a marriage application, paying $93 to seal the deal. We learned that in Florida, if one prospective spouse is an out-of-state resident (officially, that’s me—I love my Upper West Side rent-stabilized apartment), the couple is required to wait three days before the ceremony.

In the meantime, we scheduled doctor appointments to make sure Ron was really unscathed.

The day before the wedding, it occurred to us that we’d need a ring. So we drove to a mall in Wellington and entered the jewelry store closest to the entrance.

“Um, tomorrow’s our wedding and I need a wedding band,” I stammered. “I want something simple. Nothing fancy. Diamonds are out of the question.” The amused sales woman showed us a contemporary white-and rose-gold band; we had found my ring. Ron snapped the small black box shut and tucked it into his shirt pocket. 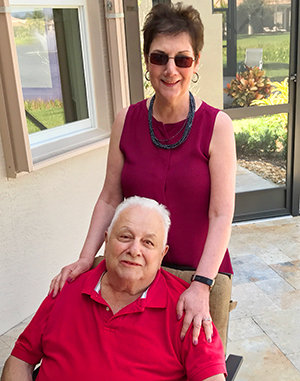 The next day—our wedding day—we headed for the courthouse. We told none of our friends. We brought no witnesses. The wedding would be our secret, one that would certainly surprise, if not shock, our many friends.

A guard directed us down the hall. On the arch overhead a sign read: “Self-Service Center.” Laughing, we entered a space just slightly more attractive than a Department of Motor Vehicles waiting room, and took a stub—E22—from a ticket dispenser typically seen in delis. (I have kept our stub as a wedding memento: We plan to frame and hang it in our den, along with a copy of the marriage license.) While waiting to be called, I took a picture of my future husband with my iPhone 7. He smiled broadly.

By now we were beyond giddy. Gone was: “But-we love-each-other-and-who-cares-about-a-piece-of-paper?” No more: “But-we-don’t-want-kids-so-what-difference-does-it-make?” We craved that license.

“Next!” called the clerk behind the desk. We handed her the marriage application and paid our $30.

The clerk stamped the application and pointed. “See that brown door?” she said. “Meet me there.”

After slipping into a green robe four sizes too large and five inches too long, she joined us in the “chapel” that resembled a large walk-in closet, flanked with plastic ferns. We looked around, wondering where the ceremony would take place, but certain this was the wedding we wanted: quick, unconventional, and simple.

“Stand there,” said the clerk kindly, pointing to space near the plastic greenery.

To be honest, I’m a bit hazy about the details after that. The clerk stood in front of us and asked the groom to repeat the oath. I think Ron swore to love and honor me. At that point, I must have had an allergic reaction because tears prevented me from focusing. I’m pretty sure he said: “I do.”

Then it was my turn, a first-time bride, age 71. I think I promised to make a home for my husband. Since I’ve been making a home for Ron in both our Manhattan apartment and in our Florida house, I knew I would be happy doing so. I’m sure I said: “I do.”

“You may kiss the bride,” the clerk said. We awkwardly kissed and asked her to double as wedding photographer and shoot photos of us with my cell phone.

The announcement and photos I posted on my Facebook page got fast and joyous reactions. Pals from Phoenix to Chicago to New York called, shouting Mazel Tov! and OMGs. One posted: “May you enjoy another 36 years of love together.”

Two nights later, our Florida friends threw us an impromptu party, just the way we wanted: no gifts, no toast, just cake.

In addition to the cake, marriage has given us other perks. I have enrolled my spouse in the United Federation of Teachers welfare fund (of which I’m a member), which provides him with dental, hearing, and optical benefits and services. In addition, I’m enrolling him in a supplemental health insurance program through the same union, which helps with out-of-pocket expenses for home health aides and dental stipends. I, in turn, get help with estate taxes. As an unmarried couple, if Ron pre-deceased me, my inheritance—as his beneficiary—might have been subject to Federal estate taxes. But as a spouse, my inheritance is not.

Now, one month after the ceremony, Ron and I love to call each other “hubby” and “wifey.” We are having fun with our new status—we beat the odds (according to the Pew Research Center “the chance of getting married for the first time after age 54 is relatively small”) and wonder why we didn’t marry sooner.