Indeed it is. Bike riding is surging around here, amid chaos and misrule 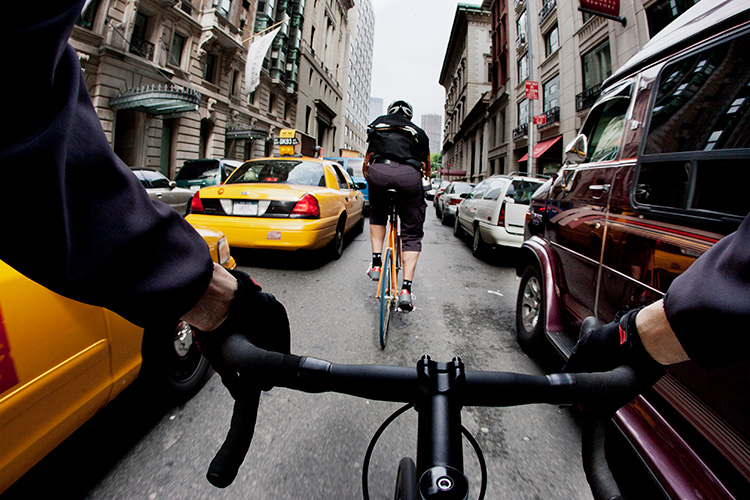 As a youngster in Brooklyn, I pedaled along the very first dedicated bike lane in the United States—on Ocean Parkway. (Created in 1894, it is cracked but still there.) Nowadays, I ride often in Central Park, as well as on bike lanes—many of them painted green but others separated from traffic by nothing more than arrows or a white line.

“Over 530,000 cycling trips are made each day in New York City—more than triple the number taken 15 years ago,” according to the latest Department of Transportation survey, issued in 2021.

As a lifelong city cyclist, I believe biking is less risky today than it was 15 years ago, and far less menacing than a half century ago. Nowadays, bikes belong. As the ratio of cyclists to motorized vehicles has climbed, so has awareness of bikes as a legitimate transit choice.

The equation has a downside, of course—a small, troubling rise in serious injuries and fatalities. And all of us face moments of two-wheeled chaos.

Which are the worst elements in this ongoing challenge? Are there any safe spaces remaining?

First, let’s address the issue of ignoring red lights. We New Yorkers pay less attention to them wherever we can, whether on foot or on a bike. Jaywalking (or jaybiking) is a Gotham pastime. Whether you’re a pedestrian or another biker, getting slammed by a bicycle that jumps a light is awful. But until the culture changes, hits and frightening misses are bound to continue.

Red, yellow, green: here’s how I rate the perils of pedaling.

Cars and trucks remain the greatest danger to cyclists. A total of 31 people in 2022 have been killed riding a “bike, e-bike or other micromobility device” as of September 1, according to Transportation Alternatives, an advocacy group. Some drivers seem to delight in roaring past cyclists and pinning them to a curb. Even on many “protected” bike lanes, traffic lights typically allow motor vehicles to make turns without regard for passing cyclists. (Protected lanes are those with physical barriers like curbs, parked cars, or plastic bollards separating cyclists from autos; some have bicycle-specific lights.) 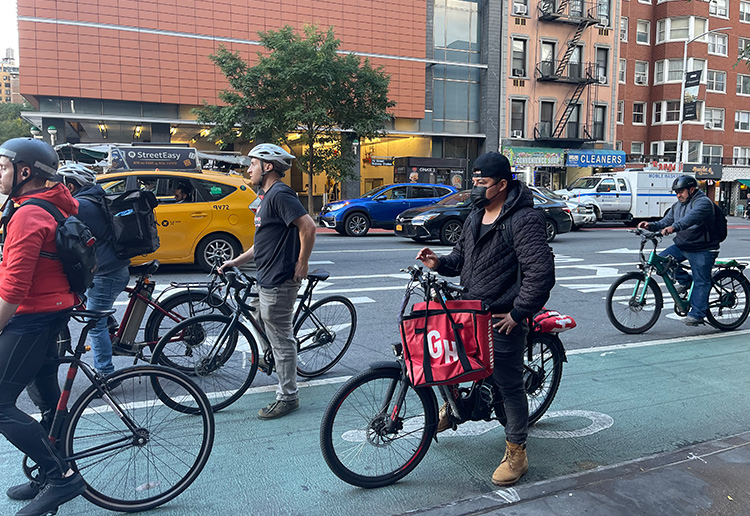 Delivery guys (how many delivery gals have you seen?) strike fear in the hearts of cyclists and pedestrians alike. Whether from Grubhub, DoorDash, or similar on-demand food delivery services, or working for specific businesses, deliverers speed at upwards of 20 miles an hour on electric-powered bikes—not just along bike lanes, but going the wrong way on streets and on sidewalks.

Yes, these riders are trying to make a living in a crowded industry that rewards speed. They are often able to swerve in the nick of time, but they scare the daylights out of ordinary cyclists and pedestrians, especially older ones. They text, talk on the phone, and pedal at the same time—often balancing boxes on the handlebars or the super-size delivery boxes on their back. They’re known to block sidewalks and roadways as they gather in packs to await a pickup call. Some are almost invisible in dark clothes at night. They have been known to leave the scene of accidents they cause. You’re nodding your head in agreement, but what can be done about them?

Some think the solution to dangerous deliverers is for the police to ticket them. Others say the restaurants and services themselves should be fined. Yet how can you identify their clients as they sweep past? How can they be slowed when their hustle is a byproduct of New Yorkers’ insatiable appetite for ordering in? It’s an ongoing issue. 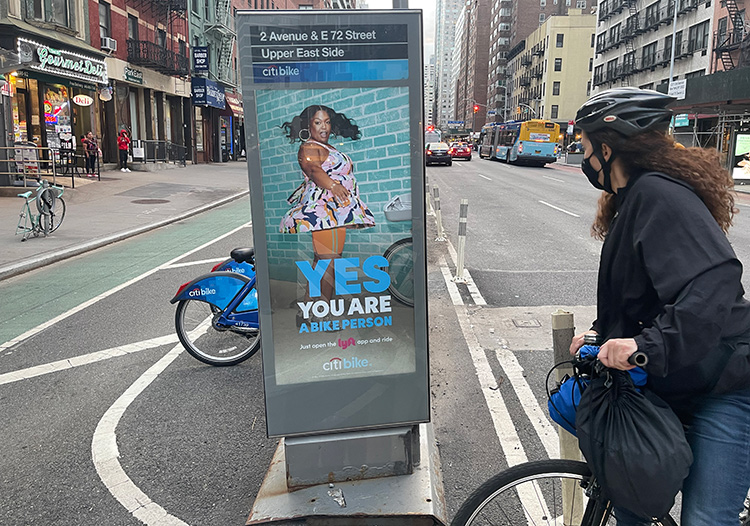 Just do it (borrowing the Nike slogan). Citi Bike and Lyft, its micromobility operator, are running a snappy ad campaign, coaxing unexpected candidates to start pedaling. Photo by Linda Dyett
. . . . . . . . . . . . .

Citi Bikes have transformed the landscape of New York streets, as they have in many other cities. I’m a big believer, with qualifications. These rental bikes are handy and ultra-sturdy (although the adjustable seats can slip down mid-ride). The Citi Bike phone app tells users which nearby docks have bikes, and which at likely destinations have vacancies.

One problem is that many clueless tourists try them out without being aware of New York’s frantic cycling culture, and, in doing so become a danger themselves. Beware Citi Bikers without helmets, weaving in and out of traffic, wearing earphones, peering at a cellphone, or ferrying a child in the front basket. The electric-assist Citi Bikes magnify these hazards because their ease of use beckons inexperienced riders. 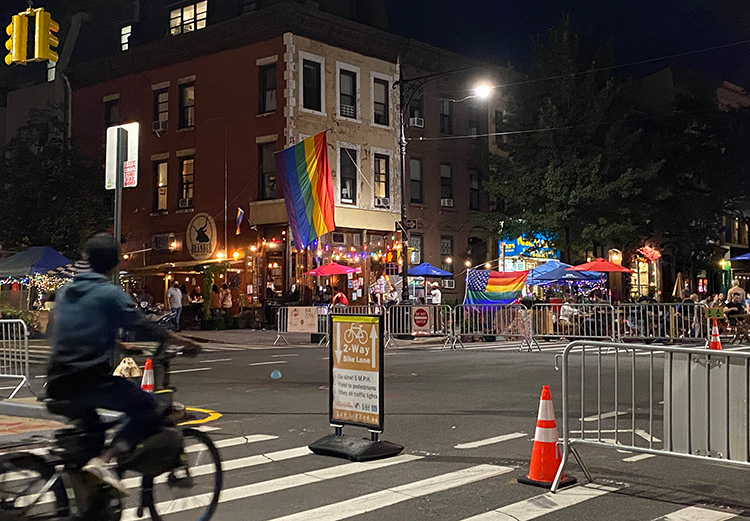 Restaurant sheds are a new menace. Some of them jut out into bike paths. Wait staffers are known to dart across adjacent bike lanes to serve customers having an outdoor meal. Every time I pedal the Columbus Avenue bike lane, I have visions of unintentionally sampling the spaghetti carbonara served al fresco at Pomodoro Rosso.

Tour de France wannabes are racers in colorful jerseys and spandex shorts who sprint on bike lanes and streets on their skinny-tire Colnagos or Liv Langmas. You can make fun of their outfits, but appreciate their riding skills. These men and women may be too fast or too serious for a spin in the nabe, but they know what they’re doing. Just don’t assume when one is bearing down on you that the rider can stop on a dime. 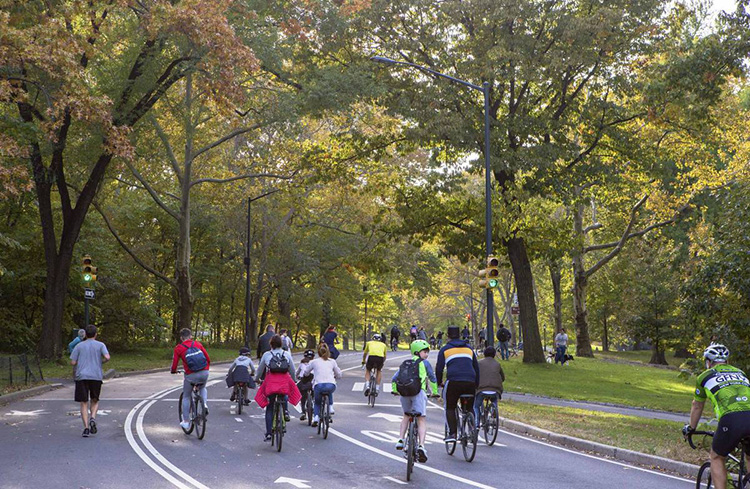 For ordinary recreational riders, many formerly safe spaces like Central Park have become problematic as bicycle-only paths get congested. I hear that mid-14th Street is now a safe cycling space because cars are not allowed. On weekdays, Central Park and the Hudson River Greenway are relatively uncrowded. But visit Central Park on a nice Saturday or Sunday, and you’ll find yourself dodging clusters of unhelmeted tourists on rental bikes taking selfies, pedicabs clogging traffic, motor bikes barreling through, carriage horses leaving excretions, children wobbling as they learn to ride, and…

…pedestrians walking everywhere, in the parks, on the streets, in the bike lanes. They insist on crossing wherever they are; they dare and sometimes taunt onrushing cyclists not to hit them. They peer down at their phones, earbuds rendering them deaf. Sometimes, as my colleague Linda Dyett notes, “they stand transfixed, motionless, in my way when I’ve got a green light, like they’ve never seen a bicycle before.” They expect the police to protect them from bad cyclists, but my experience is that there is little enforcement of bicycle laws.

Here lies the paradox; “they” means you and me when we are on foot. I’m as guilty as anyone when I amble along thinking deep thoughts.

Maybe, I think, the time has come for pedestrians to wear helmets, too.